Home Android HTC vs Samsung: Why HTC falls behind
Android

HTC vs Samsung: Why HTC falls behind 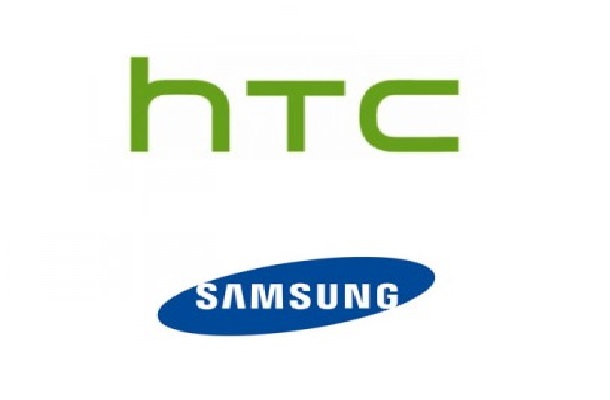 One is a South Korean manufacturer that launched its first Android in 2009. The other is a Taiwanese company, making smartphones right from the start in the last decade. Yet, Samsung today is the world’s biggest Android manufacturer while HTC, despite its head-start in the industry, is not even second, but many levels below in the hierarchy.

HTC as a company had been right at the top of their game for years. Starting with the very first touchscreen phones in the world, to the first Android handset, and even USA’s first 4G phone. HTC has been leading the smartphone revolution since the very beginning. The company rapidly grew, and consumers all over the world loved it for its beautiful, solid handsets. But something went wrong in 2011. For the 4th quarter of 2011, HTC, for the first time, recorded a drop in its profits.

That was the year when Samsung launched its Galaxy S2 – in May 2011. Widely regarded as the best Android smartphone when it was launched, it catapulted Samsung into the big league and was a big factor in the huge sales of its successor – the Galaxy S3. Ever since then, Samsung had been steadily closing the gap on HTC. Soon enough, it had overtaken HTC, and now is the biggest Android handset maker in the world. Ever since 2011, HTC quarterly reports have gone from bad to worse, with declining profits every single time.

The key factor in the rise of Samsung (and fall of HTC) was marketing. Samsung aggressively marketed its products. Its adverts were well-scripted and showcased its handsets (and their features) just right. Samsung was always visible. HTC on the other hand, barely made itself visible. When HTC did produce adverts, the concept was flawed – the public didn’t care about how a skydiver uses his HTC One X.

While HTC charged a premium for its brand – pricing handsets with similar features at higher prices, Samsung did the opposite. Needless to say, that strategy obviously worked among the masses.

Samsung also created a whole new segment – the ‘phablet’. With the launch of the Galaxy Note, it entered a previously untapped market, and being the first one to get there, settled in nicely. HTC had no phone to compete in this category, and was pushed further out of public consciousness.

HTC continued to lose market share due to a variety of reasons. Its interface overlay – HTC Sense, did more to hamper the Android experience than improve it. It was only until May 2012 – when the One series of phones were launched, that Sense actually got much better. The One X received favourable reviews everywhere, and yet, Samsung’s S3 trumped it in sales. Why? Samsung was already riding on the momentum of the S2. Consumer choice had shifted to Samsung a year back, and it was going to be hard for HTC to pull it back. Despite selling its quad-core flagship in a plastic body, the S3 was beating the One X, featuring a far better build quality. C’mon, who wants to spend so much on a phone with a plastic encasing? And yet, Samsung claims to have sold 40 million units of the S3.

Samsung didn’t always get it right, though. There are many areas which still need some work – the design, for example. Samsung seriously seems to lack a good team of designers. Or maybe they don’t have one at all. For a company of its size, it is appalling to see near-zero creativity in its handsets. Earlier criticized for having phones being look-alikes of the iPhone (is that why it so sold so many handsets in the first place?), it was the target of a number of lawsuits by Apple. Although Apple was awarded $1 billion in damages, Samsung’s handsets escaped a sales ban. When they launched the S3, it seemed as if the design had been changed only to escape Apple’s lawsuits. Although the phone did look different, minor changes were incorporated – like having round curves instead of square edges.

Having finished with that ugly situation, people hoping for a new design in this year’s Galaxy S4 were disappointed again. The S4 was basically the S3 with a bigger screen (with yet another plastic body). Another indicator that perhaps Samsung doesn’t HAVE a design team at all. HTC President Mike Woodward openly criticized the design. “We were pleased to see no innovation in the design itself”, he said.

Apart from the design, Samsung seems to be losing out on the innovation front too. Although the Galaxy S4 introduced new features – Dual Shoot, Smart Scroll, Smart Pause, among others – most were just software upgrades. There wasn’t anything that the S3 was not capable of doing. HTC later dismissed these upgrades as ‘gimmicks’. Samsung still plans to sell 100 million units of the S4 though.

Signs of  a comeback ? 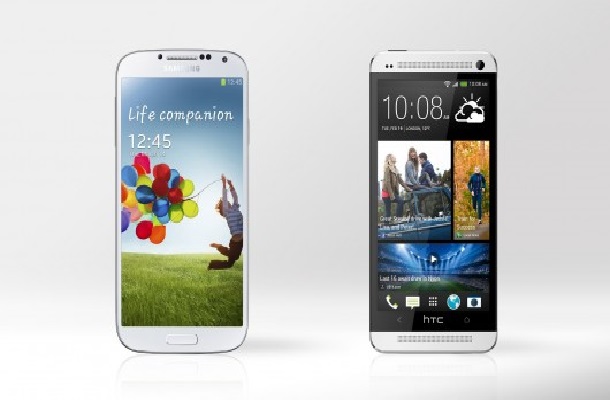 Galaxy S4 and the One

HTC seems to have gotten its act together now. In February this year, it unveiled its latest flagship – the gorgeous HTC One. HTC has always made beautiful phones, but this one takes it to a whole new level. Although it is the impressive, solid smartphone like most of HTC’s devices, this time the advertising tactics seem to have gotten better too – HTC was giving away $100 coupons and hot drinks right outside the Galaxy S4 launch in New York City. HTC’s marketing budget is also said to have been doubled. Clearly, the intent is to be visible. A bit of the old characteristic still shows though – HTC’s new feature, with which it aims to regain marketshare – the BlinkFeed – has not been advertised anywhere.

HTC Butterfly, launched in December 2012, kicked off the trend of 1080p displays in phones. With the 5-inch screen, it still isn’t an answer to Samsung’s Note series, instead rivaling flagships of this year like the Sony Xperia Z and Galaxy S4.

Samsung does not seem to be losing the battle yet. The Galaxy S4’s launch was the biggest phone launch in history, amidst immense hype and expectations – proof enough that it is still the biggest brand to reckon with in the Android smartphone arena. It remains to be seen if the actual sales of the device will match expectations.

If early sales figures are any indication, there is hope for HTC. Although the last quarter’s results may not be impressive – profits of an abysmally low $35 million – Reports suggest that pre-orders for the HTC One have exceeded the company’s target. Maybe the free coupons have worked. It’ll be interesting to see if HTC will regain its lost crown, or Samsung will continue to run away with sales – and brand value.