Retro City Rampage is in essence an invitation by indie game developer Brian Provinciano to immerse ourselves in everything he enjoyed while growing up in the 80’s and 90’s. His game, with its 8-bit graphics viewable in the style of a Nintendo Game Boy, an Atrai 2600 and various MS-DOS computers, offers a genuine retro gaming experience. In addition to this, its astonishing multitude of video game references stand as a source of humor  But these aspects alone are not enough to validate its existence as a modern retail title. Unfortunately its repetitive and uninspired game-play do not come to its rescue.

At its core, Retro City Rampage is an open world, retro stylized action game heavily inspired by the Grand Theft Auto series, but unlike GTA it allows the player to relish in unbridled killing sprees with practically no consequences. Jumping into someone’s car takes all of a second and in another second you’ll be at top speed, plowing into hundreds of innocent bystanders. If that gets boring, simply whip out a golf club, shotgun or rocket launcher to send the bodies flying. The police will turn up, but act as nothing more than an inconvenience, they are unable to arrest the main character and are far too weak to gun him down. 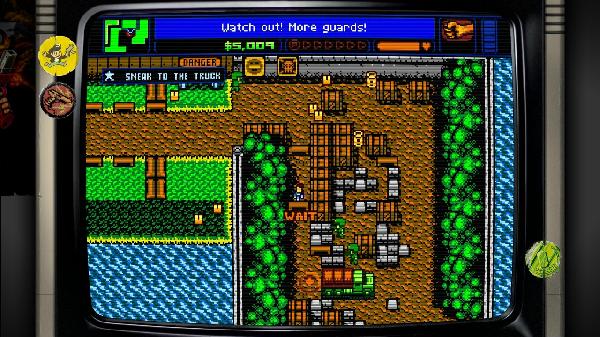 The story revolves around super criminal wannabe ‘Player’, an average leather jacket and jeans wearing goon who, after hijacking a time travelling phone booth from Bill & Ted lookalikes, travels to the past where he enlists the help of an off-brand Dr. Emmett Brown to help him get back home. His plan? Send Player out on a series of lengthy fetch quests to obtain items to rebuild his time machine.

Unfortunately the majority of the game’s 50 plus missions boil down to ‘steal car’, ‘follow arrow to location’, ‘kill enemies’, ‘collect item’, ‘drive back’. The controls are tight and responsive and are certainly no barrier to getting the job done. Using either a simple lock-on or twin stick combat system, enemies can be dispatched with ease, and driving is a simple matter of holding down the acceleration button and pointing the car in one of 12 directions.

Retro City Rampage does offer the odd variation to this mission formula including Paperboy inspired newspaper delivery, a few instances of Metal Gear Solid-esque stealth and some ‘Splosion Man platforming. These missions are few and far between and, seeing as they don’t make use of the run-n-gun controls of the ‘standard’ missions, actually make up for the game’s most difficult and frustrating levels.

As may have been made obvious in this review, Retro City Rampage is heavily inspired by video games, movies and general pop culture, which is in fact one of the game’s defining aspects. In the first ten minutes alone strong references are made to Mega Man, Duck Hunt, Sonic the Hedgehog, and Duke Nukem’, with many, many more appearing throughout the game. Some of these references are cleverly made, some are simply there for the sake of being there and some are so in-your-face that they’re almost embarrassing.

During one mission in particular Player stops to play a cutesy-poo Super Mario clone only to then essentially rant directly to the actual player about violence misinterpreted in video games by those who wish to censor or ban them completely. The point is valid, but is made in such a manner that will undoubtedly leave many players feeling awkward. 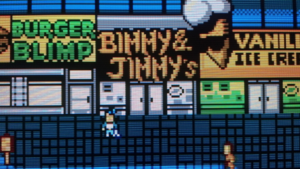 The effort made in incorporating the tens, perhaps hundreds of references into the game is nothing short of astounding, but references don’t make for a good game regardless of how witty they are, and Retro City Rampage’s use of them doesn’t make up for its lackluster game-play.

Graphically the game draws straight off the styling of classic 8-bit Nintendo Entertainment System titles. The city of Theftropolis is teeming with pix-elated 8-bit citizens of all shapes and sizes driving an array of different vehicles, all of which handle in different ways. Shops appear on every corner offering services from narcotic milk, to notorious 80’s haircuts, to full blown plastic surgery.  Players will undoubtedly spend a large proportion of their total game-play hours simply exploring the city while enjoying the excellent chiptune soundtrack. 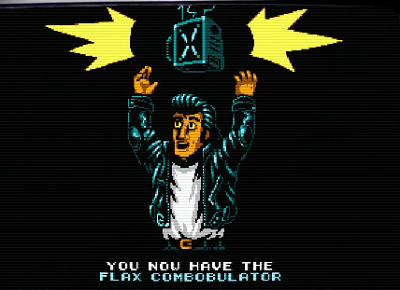 A player’s appeal to the game will ultimately depend on their receptiveness of pop-culture reference based jokes. In a similar fashion to the TV program Family Guy, some will find such jokes funny at first before either becoming immune to them or annoyed by them, whereas others will find them consistently funny. The game’s over reliance on these references show in scenarios where these jokes are poorly implemented and where the player simply isn’t aware of the reference being made.

Roaming around the large and incredibly detailed city while massacring its 8-bit inhabitants is genuinely fun, yet the thrill only lasts so long. Unfortunately the actual missions do not offer enough depth to keep players in the game for more than a few hours, by which point it becomes obvious that the repetitive fetch quests act as nothing more than links to the next set of references.

Retro City Rampage will  provide entertainment for players wanting short bursts of simple retro-inspired carnage, but will disappoint those seeking an engaging story-line with deep game-play to back it up.