Being the first game trailer shown during Spike TV’s annual Video Game Awards, The Phantom Pain is certainly an impressive looking project. However since its original showing on Dec 7th  eagle-eyed gamers around the world have pointed to evidence suggesting that the game, purportedly under development by previously unheard of Moby Dick Studios, may in fact be Metal Gear Solid V.

Earlier this year Metal Gear developers Konami released a trailer and images for a separate entry in the series titled Metal Gear Solid: Ground Zeroes which is set to feature Naked Snake a.k.a Big Boss as the main playable character. Fans of the series will undoubtedly be familiar with Snake’s signature eye-patch, hair cut and facial hair and so much so that when they looked at still images from the The Phantom Pain‘s trailer they were surprised to see Snake’s face looking back at them.

Another big clue seen during the trailer is the main character’s vision of a flaming man that bears a resemblance to Snake wearing an outfit seen in Ground Zeroes footage as well as in 2006’s Metal Gear Solid: Portable Ops. This link may seem tentative, but according to official Metal Gear lore it is known that at some point after Portable Ops Big Boss suffers an accident that puts him into a coma which in turns sparks a series of events resulting in his cloning and the birth of Solid Snake. If the footage in The Phantom Pain is assumed to be from Metal Gear Solid V then Snake may well be suffering from post-traumatic stress induced hallucinations of former events of his life as he wakes up in hospital from a coma. 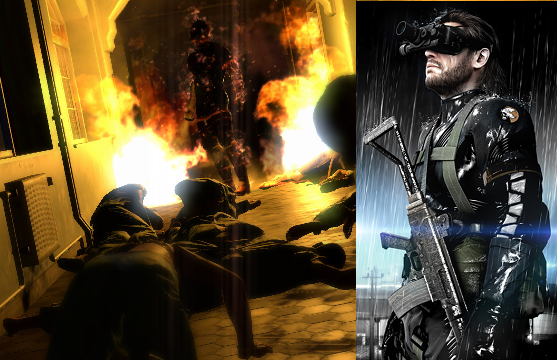 One of the biggest clues comes not from the trailer itself but from The Phantom Pain‘s logo. A group of NeoGAF users noticed strangely spaced negative spaces jutting into the letters making up the game’s logo as well as lines coming out of them. After some experimentation, they found the words that fit, as seen in the image below.

Inspection of the mysterious Moby Dick Studios also gleans some further hints of a hoax. Only one member of staff is listed on the Swedish developer’s website, CEO Joakim Mogren. While Joakim is a genuine Swedish name given to males, it is also coincidentally an anagram of the Japanese name Kojima. With world renowned video game director Hideo Kojima being the creator of the entire Metal Gear series, many consider this more than simple coincidence.

As time goes on fans fans will undoubtedly discover more and more hints pointing towards the true identity of The Phantom Pain. If it does indeed turn out to be Metal Gear Solid V then Konami have unleashed a fantastic, hype generating hoax upon the gaming world that is unlikely to be forgotten any time soon.