Geek Girls: Moving Up In Technology

For the last, oh…200 years or so, if you were a women who enjoyed science, technology, and basically anything that falls into the ‘geek’ category, you were an oddball. The real question is: Why? Is it pure sexism that has excluded women from geek culture for all these years or simply a fear of stereotyping and stigma that has kept us under wraps for so long?

When I think of awesome geek girls who have shaken the foundations of all things manly-science, I think of radioactivity genius Marie Curie. Regardless of gender, this woman made some serious history in her field. She discovered polonium and radium, won the 1903 Nobel Prize, and was the head of the physics laboratory at Sorbonne. Don’t even get me started on her doctorate degree. Yet, somehow, when she applied for membership at the French Academy of Sciences in 1911, she was rejected. Say what? That’s right. The French Academy rejected Marie because she was a woman and made no attempt to hide their reasoning. Unfortunately, the stereotype of the era was that women were inferior to men and somehow uneducable. Even though she was rejected, Marie obviously proved them wrong on both counts.

What about geek-girl Majel Barrett? Maybe you have never heard of her, but back in 1964, Majel played “Number One”, the unnamed first officer in the original pilot episode of Star Trek. Of course, that was before NBC decided that director Gene Roddenberry should submit another pilot episode that omitted Majel, citing that a female senior officer was unrealistic and would be rejected by audiences. She was ultimately replaced by Spock and was reassigned to the more docile and female role of Nurse Christine Chapel.

Instances like these are obviously fewer and farther between as women have climbed the ladder of equality over the years. But are geek girls making any head way? Sure, there are those of us with a level 90 Pandaren Shaman, but whether or not geeky ladies are actually contributing to and being successful in the tech industry is another ballgame entirely.  There is a definite stigma attached to geek culture that many women want to avoid. While sexism is still a major issue, very few tech business women want to be lumped into the same group as video-game obsessed teenagers, hackers, and cosplay participating grown men.  Still, despite the hardships, some women decide to ignore the stereotypes that come with their title and forge a new path for geek girls everywhere.

A Kenyan woman named Judith Owigar is the president of a group of geek girls who call themselves the Akirachix. Akira is the Japanese word for energetic and intelligent, which is exactly what these ladies are. In a country where there is still major gender inequality and little IT in the first place, Judith and her Akirachix are super heroes in the Kenyan tech industry. One of Judith’s close friends and fellow Akirachix, Susan Oguya, is busy solving problems for Kenyan farmers with her app creation and programming skills. After graduating University with an IT degree, Susan created, programmed and marketed an app that allows farmers to check the prices of their crops via text message, skipping the usually corrupt middleman. Now, at age 25, Susan has a company called M-Farm, a staff of 18, and over 7,000 African farmers use her app to help with crop pricing.

Susan’s app is not the only one to be created by a Kenyan woman. Incredibly enough, these geek girls seem to have successfully carved out their portion of the Kenyan tech niche and have released apps that are not only making these ladies successful entrepreneurs but also solving problems for their communities. They have created apps that bring math and reading tools to village schools via smartphone, an app that allows Kenyans without a home computer to do their online shopping on their cell phone and even buy car insurance that measures rainfall at Kenyan cellphone towers and automatically sends money to farmers who are experiencing drought. How awesome is that?

Here in America, where geek culture is already established as a predominantly male circle, women have a harder time breaking into the tech industry and being taken seriously. While it may be difficult, it is most certainly not impossible and Yahoo! CEO Marissa Mayer is a fantastic example. Holding a M.S. in computer science and an honorary doctorate for her work in the field of search engine technology, Marissa became employee number 20 and the first female engineer ever at Google back in 1999. As of 2012, Marissa became the youngest CEO of a Fortune 500 company when she accepted her position as president at Yahoo. Marissa is one of the few geek girls who has claimed her rightful place in the American tech industry and has everything to show for it. 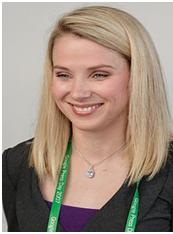 Even though there are remaining stereotypes surrounding women who practice a ‘geeky lifestyle’, things have certainly changed for techy women the world over. People like Susan Oguya and Marissa Mayer are truly an inspiration for geek girls who feel the industry is just too difficult to break into. Their stories and successes shout to women everywhere that, “You can do whatever you want if you want it badly enough and it is so worth the effort.”