Over time, Windows tends to slow down and lag. Once it’s too much for you to bear, you re-install to make it run all smooth again. I’ve been running Windows 7 ultimate on a Lenovo G580 since July and my Windows installation had begun to crawl by December. Windows 8 is selling for just $40 – the lowest price ever for Windows. So instead of going about a fresh install, I decided to try out Windows 8 Pro on dual-boot. My experience:

Windows Vista and 7 incorporated the Aero theme and thus represented a major change in Windows versions. But the heart of the OS remained consistent, and someone having used earlier Windows versions would not have problems getting along with Vista or 7. Windows 8 however, takes change to a whole new level. The new interface – where tiles replace your desktop – could be a problem for many. In fact, my first few hours with the OS were so frustrating, I wanted to immediately delete my Win8 partition and switched back to 7. But since then I have figured out how to go about the interface, and having more or less gotten my Windows 7 experience back, I am a lot happier with 8 than I initially was.

I’ve not been a fan of Windows Phone, which is where this tiled interface comes from. Tiles on a computer screen doesn’t seem very appealing.

If Microsoft must push for adoption of this interface, it needs to fix the steep learning curve. Many users could face serious usability issues with Windows 8. But Microsoft seems to have done little about it. Once my Windows 8 installation was complete, I was shown a grossly inadequate tutorial on how to move the mouse pointer to the top right to open the ‘Charms’ bar. Really, all it showed me is how to move my mouse to the top right corner, 4 times over – nothing else at all. It should at least mention how to switch between different windows, or that Win key + X brings up administrative tools. Genius.

This interface, which Microsoft now calls ‘Modern UI’, is built for touchscreen devices, like tablets. To maintain uniformity, Microsoft has Windows 8 running and looking exactly the same on whatever device it is on – laptop, PC, or tablet. I’d say this has been a bad decision – using Windows 8 with a keyboard and mouse can be uncomfortable.

So Windows 8 has this “Start Screen” which displays an array of live-tiles linking to Apps and programs.  The live tiles display live information, like weather and news, without having to open the app. It’s like Microsoft is just trying to replicate a smartphone experience on your computer. There’s a “Store” where you can download Apps for your computer; there’s even a lock-screen when you boot up.

Microsoft has done a poor job here. While the interface may be received differently by different people, no one will like all the settings HIDDEN throughout the system. You literally have to figure things out for yourself.

Switching between multiple open windows can be a pain initially, since the tutorial doesn’t mention it. To switch to the last open window, we drag the mouse to the top left. I’d much rather use Alt+Tab though – its much faster on a keyboard. To see a list of all open apps, swipe vertically from one of the left corners. The App Switcher opens displaying all your open apps. You can close the apps using a right click. Once you’re used to it, it’s fine. But all this really warrants a tutorial. Even then, it’s incomplete. The App Switcher only lists out Modern UI apps. The desktop apps can be accessed only by opening the desktop tile. WHY? Why can’t it show all open windows? On many occasions, I found myself trying to use the Escape key to switch to the previous window – a habit coming from using Android, where you press the Back key.

You could disable the App switcher entirely though, via a setting hidden in PC Settings.

Thankfully, there’s a ‘desktop mode’, which brings you back to the traditional desktop that we’re all used to. The Start Menu, however, is still missing. I used some Apps from the Store and brought it back on, and things seemed comforting again. The Aero theme, which was introduced in Vista and continued onto 7, has been removed in 8. Some functionality gets to stay though – Aero Peek (for having a look at your desktop at any time by hovering to the bottom right of the screen) stays, while Flip 3D (activated by the Windows key + Tab) has been removed. I liked that one, actually.

Windows has removed almost all things Aero. The top bars in windows are no longer transparent, replaced by a solid color depending on your theme. Microsoft has removed a large amount of Aero code so getting this back is not possible. There are only partially working tweaks that you could look up on Google.

That’s the closest Windows 8 gets to feeling like Windows 7.

There’s enough customizability offered, though. There are 20 start screens and 25 color themes to choose from, and enough pre-loaded wallpapers and other options for people to play around with.

The social integration is impressive. Once you link your accounts – Facebook, Twitter et al – you can chat right from your Start screen using the Messenger app. Once your contacts are synced (using the People app), you can even access them all right without having to log on to websites. I liked the interface enough and over time, began preferring it to my Facebook login via the browser.

The Photos App is useful – having all your photos, both offline and online, at one place, is a plus. But here again, Microsoft’s thoughtlessness is apparent. How do you index already existing photos on your drive to show up on the app? I was clueless, and was almost going to believe only photos in the native photo library would show up. Call up Microsoft customer care, and they’ll tell you this is a limitation in Windows 8 and you cannot index such photos. After a bit of Googling though, I discovered right-clicking on a folder, followed by “Add to library” would do the trick. Why hasn’t Microsoft mentioned this?

The other apps – News, Weather, Calendar – they’re all on the Start screen, as if Windows 8 is trying to be my phone. I don’t mind though.

The Task Manager has evolved – processes are now divided into Apps, Background processes and Windows processes, and system resource usage is more detailed. The file transfer dialogue has changed as well – we now get a graph of the transfer speed.

The Charms bar, an integral part of the radical new design in Windows 8, can be accessed by moving the mouse to the top right corner of your screen. You get options – Settings, Devices, Start, Share and Search. The bar evolves to your needs depending on the app. Regardless of whatever app you use – the Search, Settings and Search options for it can be accessed from this Charms bar – thus bringing uniformity across Apps. The Charms bar however, is a slow way to get back to the Start screen. I’d much rather mouse over to my bottom left. Plus, the search function can be pulled up by simply typing on the keyboard. 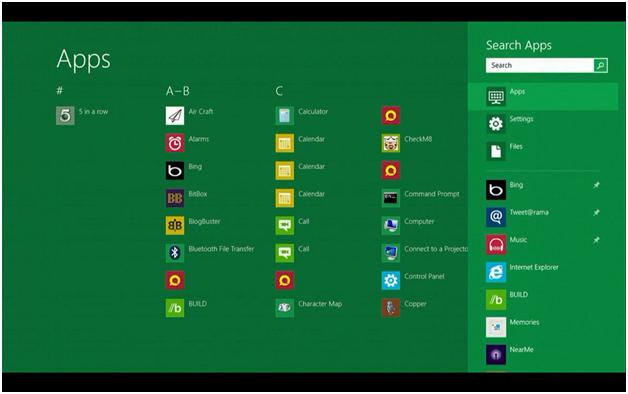 Two features that would deserve a mention – 1. Sync your settings – Once enabled, you could log onto another PC, laptop or tablet running windows 8 and it’ll behave exactly like your machine. Your settings are preserved.

Another is native PDF support – you don’t have to head over to Adobe’s website and download their reader. Frequent users of this format will know how crucial this is.

Performance is impressive. Windows 8 on the whole, is a faster OS than Windows 7. There’s no lag, and response to input is instant. The interface really is, like Microsoft calls it – ‘fast and fluid’. I also noticed a slight increase in performance when running 64-bit apps like Waterfox, iTunes, compared to Windows 7. Most importantly, boot-up and shut-down times are insanely fast. That must be the best factor working in favor of Windows 8. On a Lenovo G580 with a 3rd Gen i5 and 4GB of RAM, Windows 8 was taking 25 seconds to start up and just 5 seconds to shut down.

But contrary to what I’ve been hearing from many, I haven’t seen any improvement in battery life. In fact, there’s actually a 10% drop.

The major issue with Windows 8 is the steep learning curve. It took me a day to get used to it and discover all the hidden gestures and features, but now I am much more comfortable with the OS and will not be moving back to 7. Once you get the hang of Windows 8, which could take some time, it’s not difficult at all playing around with it.

What works in favor of a Windows 8 switch? Performance – it’s a faster OS. Apps – although the app pool isn’t huge, it’ll grow, and will obviously serve a useful purpose.

A switch would also depend on what OS you’re on right now. Support for XP ends in 2014, and it’s more or less abandoned. If you’re an XP user – switch now.  If you’re on 7, it’s not absolutely necessary. There’s no new feature that you cannot do without.

If you want better performance – switch.

If you’re an app enthusiast – switch.

If you’re happy with your 7 installation and if battery is a MAJOR concern for you – there’s not much you’d find attractive in 8.

At the current price, though – $40 – you should definitely purchase a license before January 31, even if you plan to upgrade some other time.  January 31 is when this good-looking price tag will be replaced by a more expensive one.

I’m not sure it’d retain the same value for money then.

Have you purchased Windows 8? Let me know in the comments below.