Home Entertainment On ‘How to Get Away with Murder,’ Everybody Lies (But Only Because They Have To)
Entertainment

On ‘How to Get Away with Murder,’ Everybody Lies (But Only Because They Have To) 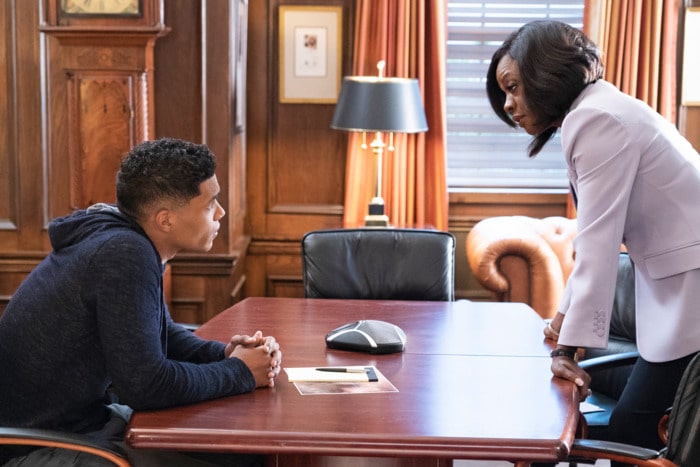 Remember the one about being able to tell when a lawyer’s lying because his lips are moving? Yeah, it’s an old joke based on an unfair stereotype—we’re not all compulsive liars. But if you knew nothing about the legal profession, “We Know Everything” (along with just about every other episode of HTGAWM) would have you convinced that all lawyers are completely incapable of telling the truth. About anything. Ever.

Because, at the end of the day, that’s how you get away with murder. You lie about it, and you point the evidence at someone else if possible—preferably someone who’s getting away with something else, or maybe someone who poses a threat to you in some way. For example, when the group finds out that Gabriel might be working for the FBI, Asher’s first thought is to just frame him for Miller’s death and figure out the details later. And Asher’s actually one of the good guys now (relatively speaking).

Of course, Gabriel isn’t actually working for the Feds, but they desperately want him to be. So they manufacture a domestic terrorism charge in connection with the Ferguson protests and plant evidence in his apartment to support it (law enforcement also likes to play fast and loose with the truth in the HTGAWM universe, so things kind of even out). Amazingly enough, Annalise is able to use footage from the camera Frank hid in Gabriel’s apartment as proof of the FBI’s frame job, creatively manipulating the facts as only she can.

And getting Gabriel’s charges dropped opens the door for Annalise to get him on board with the larger plan—framing the Governor for Miller’s murder. Yeah, we all know she’s not the one who killed Miller, but she’s most likely responsible for Nate Senior’s death, so she has it coming—right? And one more lie won’t hurt. After all, Gabriel’s still a threat since he’s been looking into Sam’s death, so getting him on board with the master plan without filling him in on the actual details is the smart move. Slimy, but smart.

Meanwhile, Nate and Bonnie continue to wrestle with the guilt of what they’ve done. Nate (with Frank’s help) is digging into Miller’s phone records to find something—anything—that might connect him with the Governor. And he does. The only problem is that it’s about Annalise and her failed attempt to adopt Wes, which is a real problem for Annalise. Viola Davis always does a great job showing us the many sides of Annalise Keating, and here we see her usual confidence give way to fear and frustration. Not only is she deathly afraid of what might happen if the Feds connect the dots between her and Wes (and Sam), but we saw a few weeks ago that the adoption attempt and its surrounding circumstances represent a very dark time in her life that she doesn’t want to revisit.

Bonnie, on the other hand, is still beating herself up mercilessly. Sure, she visits Mrs. Miller to get information, but I think her real reason is to feel even more of the guilt she tried to run away from last week. She doesn’t want the guilt, but she knows she deserves it. That’s why she keeps answering the phone when Mrs. Miller calls. And you get the sense that she just wants to break down and confess—at least that way Miller’s mother would have some closure. She doesn’t go that far, but allowing the body to be found is the closest she can come to easing a mother’s pain without going to prison. It hurts now, but at least the waiting’s over.

However, despite the urge to come clean, Bonnie still keeps the lie going. Because that’s what you have to do. You deflect, and you spin the facts, and you point the finger at somebody else. That’s how you get away with murder.

But, no matter how hard you try to cover your tracks, one innocently-posted Instagram photo can bring it all crashing down.

Sex Education: Every Day is a School Day