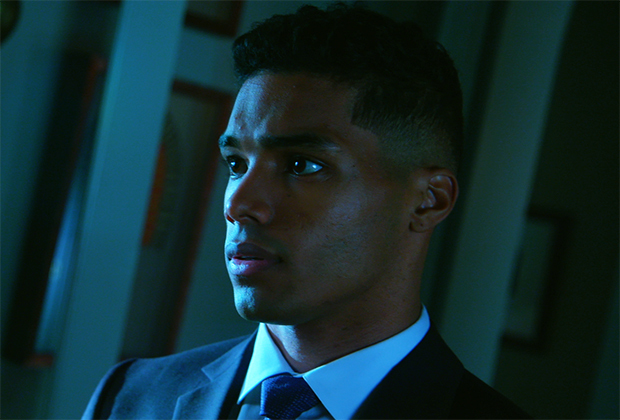 It’s been a few weeks since we last checked in on the HTGAWM gang, and there was a lot happening then—a wedding, a homicide, and the reveal of a long-lost stepson. Of the two big mysteries that were solved last episode, “He Betrayed Us Both” chooses to downplay the untimely death of Ronald Miller in favor of the Gabriel Maddox story, which is probably a smart move. There’s so much to unpack with both of them that it would be hard to squeeze everything in at once, and I’m sure Miller’s death will get plenty of attention in the weeks to come. But, at least for now, Gabriel poses a much bigger threat to a greater number of people—not the least of whom is Annalise herself.

HTGAWM has always made good use of flashbacks and flash-forwards, and the trip back to 2005 lets us know why Sam having a son is so devastating for Annalise. Sam and Annalise started their relationship on shaky ground, and it really never seemed to recover. As much as he may have loved Annalise, he never forgave himself for leaving Vivian and Gabriel, and so he never truly committed to his new marriage. Although it’s never specifically pointed out, I can imagine there was always a part of him that resented Annalise for “taking him away” from his family (even though he was an adult who made his own choices).

So when Annalise loses her baby in the accident, Sam’s first reaction is to essentially replace him with the son he already has but doesn’t know—Gabriel. And Annalise’s response is similar—replace the son she’s lost with a son who’s lost his mother (Christophe). As Frank points out, though, neither of those are good options (and neither of them end up being possible, anyway). But, even when he tries, Sam still can’t bring himself to give up on his former family and fully commit to his grieving wife. Of course, that explains his continued infidelity (including the events that lead to his death), which at least partially explains why Annalise never really trusted him.

So even if Gabriel doesn’t present a legal threat to Annalise and the group (which remains to be seen), he’s at least injected himself into Annalise’s life at a time when she can’t afford any more stress. Between her legal clinic, her fight with the governor, and her class action suit, she’s barely keeping it together as it is. She’s already given up on sobriety (at least for now), and the last thing she needs is a stepson who’s a constant reminder of the husband she came to hate and who also has a motive to make her life even more miserable.

As far as Miller’s murder goes, things are fairly quiet at this point. Nate and Frank help Bonnie cover things up as much as possible, and Nate does the right thing by taking responsibility for Miller’s death. Of course, I doubt he’ll volunteer to confess to the police, but he at least reassures Bonnie that he’s the one who did the actual killing, and Bonnie’s actions really amount to nothing more than a mercy killing. Which is still technically illegal, but at least it’s morally defensible. That really doesn’t help Bonnie feel any better, but maybe it will help in time.

As for the rest of the group, their big concern is whether Gabriel will try to reopen Sam’s murder investigation. That would be a really big deal were it not for the fact that our good friend Bonnie’s hooking up with the acting district attorney, so everything’s fine, right? Oh, wait…something tells me they’re in for a pretty big surprise (and not in a good way).