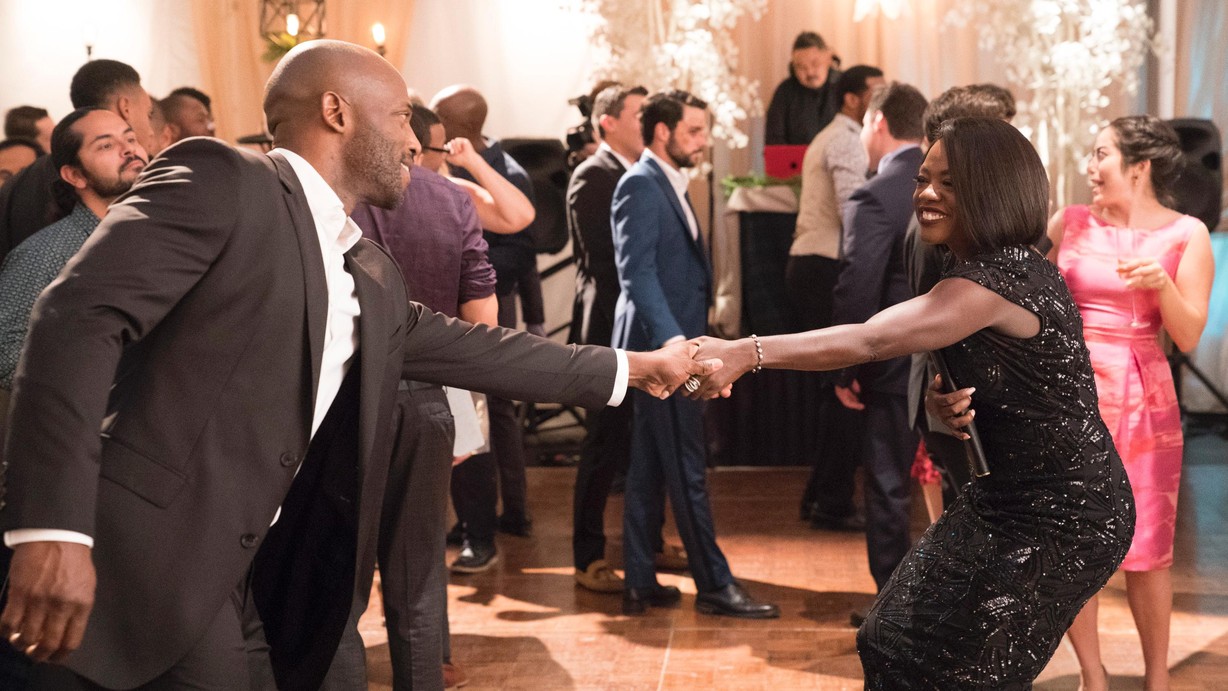 How to Get Away with Murder Season 5, Episode 8: “I Want to Love You Until the Day I Die”

So now we know who died at the wedding. And, as far as big reveals go, this was a pretty satisfying one. HTGAWM has always used flashbacks and flash-forwards in a very creative way, and the fall finale picks up all the breadcrumbs left in the previous episodes and put them in order so they all make sense.

As for Miller being the victim, I’ll admit that I didn’t see that one coming. We found out a couple of weeks ago that he and Bonnie were probably going to have some sort of falling out before the wedding, but who knew it would go this far? In retrospect, he’s probably the most logical choice if for no other reason than the fact that he’s not a main character, so that shoots him to the top of the “expendable” list right there.

So we say goodbye to Miller, and, for the most part, he won’t be missed. Especially if he’s the one behind the death of Nate Sr. And the evidence against him is pretty strong. He did have a friend in the governor’s office, and he did use a pay phone that’s listed on the warden’s call log the day Nate Sr. was killed. And we know that, in this day and age, the only reason someone uses a pay phone rather than their cell is to avoid detection (although there are more of them still around than you might think). He also had a really good motive—if he helps the governor, she makes him the permanent D.A.

But there’s a part of me that wants to believe that he couldn’t have been capable of such a heinous crime—not for his sake, but for Bonnie’s. To me, the real tragedy is not that Miller’s dead, but that Bonnie’s lost the one good relationship in her life—maybe the only one she’s ever had. Even if he made a really, REALLY awful decision to help the governor and further his career in exchange for another man’s life, that doesn’t mean that he didn’t love Bonnie. Why else would he have planned to propose?

Of course, maybe Annalise is right. Maybe Miller’s just been using Bonnie all along. But, at this point, I’m not sure which is worse. Either Bonnie helped Nate kill a man who was extremely flawed but who still loved her, or Miller’s been nothing but the latest in a long line of people who just see her as someone to be used up and thrown away. Either way, Bonnie loses. And it’s heartbreaking to watch.

It’s also tough to watch Nate struggle with his emotions—not only because he literally beats Miller to a bloody pulp, but because he’s so frustrated and angry about losing the father he had just reconnected with after years of estrangement that he just can’t control himself. The parallels are easy to draw between Nate Jr.’s uncontrollable rage against Miller and what it must have been like for Nate Sr. as he beat a man to death in a similar fashion 30 years previous. At least he knows a pretty good lawyer.

What’s fascinating is that all of this tragedy is happening against the backdrop of one of the most beautiful moments I’ve seen on television in a long time. Connor and Oliver’s relationship has been the one reliably good thing on this show for several seasons now, and you can’t help but be happy for them as they commit to each other for life. Those two crazy kids just might make it after all.

The only person who isn’t thrilled about the wedding is Annalise, who apparently doesn’t do weddings in general. The only reason she’s there is because Connor guilts her into it (which is big of him, actually, given their rocky relationship this season). But she leaves the ceremony early to get drunk in the bathroom, then leaves the reception to drink more in the church. I get why she didn’t want a wedding of her own, but why do other people’s weddings freak her out so much? I’m not sure I understand that part.

But there are plenty of other reasons for her to drink right now—she’s feuding with the governor, her criminal justice reform project is in jeopardy, and there’s something about a mysterious adoption that she doesn’t want to be made public. And now, on top of all that, we finally find out that the mystery man himself, Gabriel Maddox, is Sam Keating’s son. And that seems to have pushed Annalise completely over the edge.

Maybe I’m just thick, but I’m not sure I understand why this is such a catastrophic turn of events. Is Annalise afraid that he knows too much about her past? Is she afraid he’ll lay claim to whatever’s left of Sam’s estate? Or, based on that last shot of Gabriel’s face morphing into Sam’s, is she just that creeped out about having to be around someone who’s a constant reminder of her ex-husband? Maybe time will tell. It’s also possible that there’s something in a previous episode that I’ve forgotten that would explain a lot of this—if so, please tell us about it in the Comments section below.