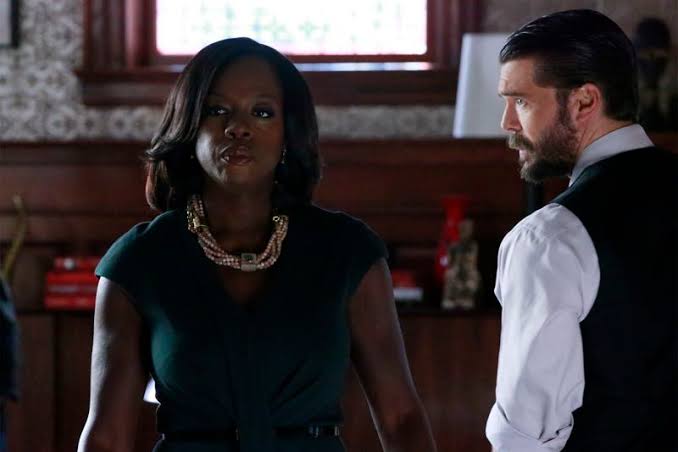 How to Get Away with Murder Season 5, Episode 6: “We Can Find Him”

I should have seen this one coming. The writers weren’t even subtle about it, but I got caught up in the plot and forgot the second basic rule of television and movie watching. The first rule, of course, is that, until you actually see the body, you can’t be 100% sure that someone’s really dead (and sometimes seeing a body isn’t even enough). And the second rule is that, if you’re watching anything other than a comedy or a happily ever after kind of show, and a minor character suddenly has all of his problems magically solved and is about to ride off into the proverbial sunset, you can bet on the fact that he’ll be dead before the episode’s over.

One of the most positive things about this season (and last season, as well) of HTGAWM has been the reconciliation of Nate Lahey with his dad, Nate Sr. And now, after last week’s dramatic court victory, we see the elder Lahey getting his long-overdue transfer to a state mental facility. But he’ll only be there about a week, because he’s also getting a full pardon (more on that later). On top of it all, he finally feels ready to make amends to the family of the man he killed 30 years ago. Everything seems to be working out as well as it possibly could.

So, of course, the shot (pardon the pun) of him lying in a pool of his own blood to end the episode should have come as no surprise. We’ve all watched this show enough to know that, just about the time you think you have a handle on what’s happening, they pull the rug out from under you and send you off in a different direction. It’s what we love about it. It doesn’t always make sense, but at least they keep you on your toes.

Of course, the main thing to remember when watching HTGAWM is that you can’t believe what anyone says. Annalise is usually pretty good at sorting through the bullshit and making the right decisions, but this week she struggles as her new nemesis, Governor Birkhead, offers an olive branch in the form of a proposal that would align the two powerful women and put the power of the state government behind Annalise’s fight to reform the criminal justice system. Annalise knows it’s probably too good to be true, but she’s intrigued nonetheless. So much so that, when Emmett tries to help her see the fatal flaw in the proposal, she’s not sure which one of them to trust.

Ultimately, Emmett convinces her that he’ll support her no matter what, and so she turns the governor down. Until Birkhead dangles Nate Sr.’s pardon in front of her, and then she just can’t say no. And who can blame her? She’s on the fence anyway, and now her “face case” client, who’s also the father of a close friend (sometimes with benefits), can walk out of prison a free man? She can’t turn down that kind of deal, which makes the situation that much more tragic. She’s now most likely burned her bridges at Caplan and Gold, and (MILD SPOILER) since Birkhead’s probably responsible for Nate Sr.’s murder, she’s lost that opportunity as well. Or it never existed in the first place. Either way, a good man is dead, and Annalise’s criminal justice reform project may be next. And that’s beside the fact that the law clinic now has no sponsor, so it may be gone, too.

Bonnie’s also having trust issues, which (sadly) are nothing new for her. But this time it’s with her sister Julie, who’s the only one who seems to know what really happened to the child Bonnie had when she was 15. This one gets a little weird—first Julie says that their father sold the baby right after it was born, but then Frank finds out that Julie was caught trespassing about a year after the kid would have been born, and the family living at that house has (had?) a son that would be the right age and looks EXACTLY like Bonnie.

So mystery solved—except that, when Julie’s confronted with all this, she says she actually buried the child in the woods behind that house on the way home from the hospital? I’ll admit it—I’m confused. At least they’ve promised us that “question after crazy question will be answered” in the next two weeks before the mid-season break, so let’s hope they come through.