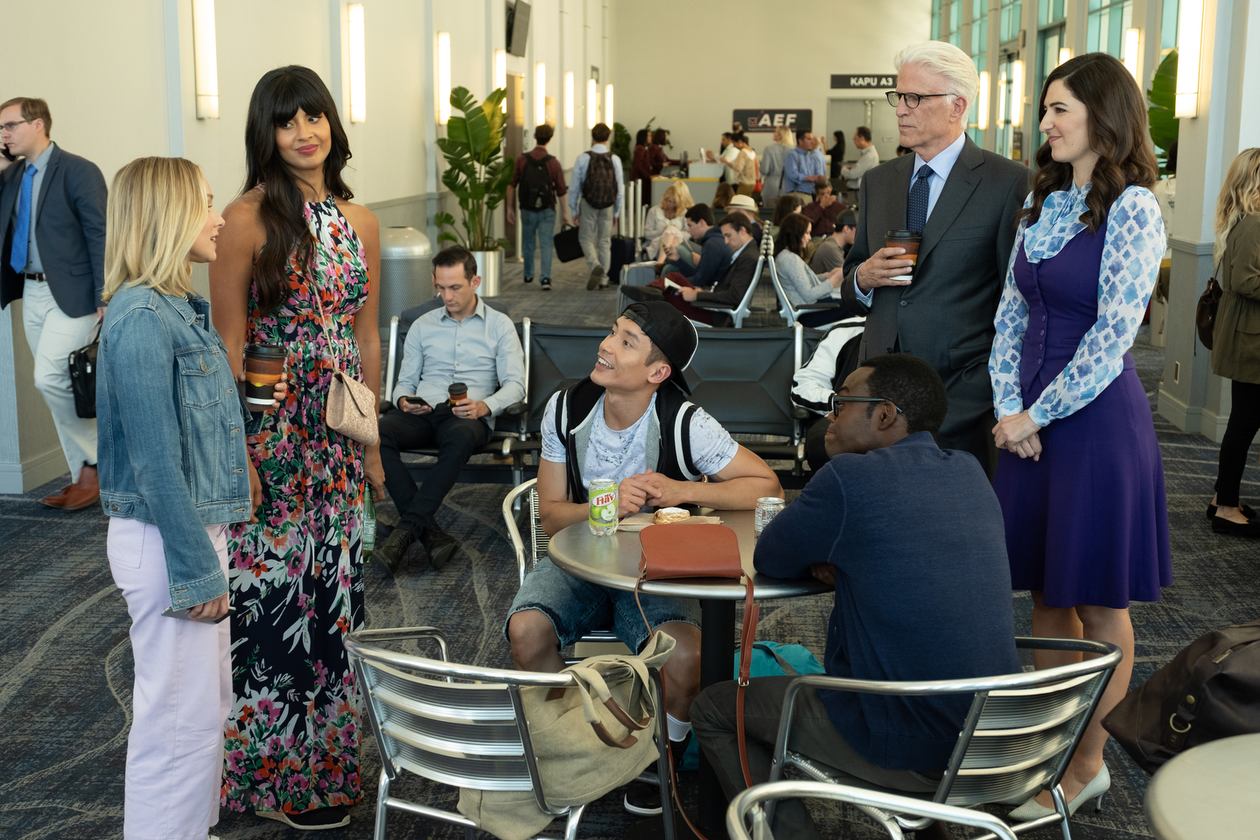 When Mike Schur initially pitched The Good Place to NBC, the game-changing twist at the end of its first season was a part of the package. From the beginning, rug-pulling was a piece of this show’s DNA, a part of the trick that kept viewers on their feet. With each new twist between seasons one and two, the writing team became masters of subverting expectations. Just when a cliffhanger seemed to indicate that a character was doomed, something entirely unexpected would save them—a cosmic train to a distant middle-ground cabin in the afterlife, or a powerful being with the ability to reconsider the eternal judgment of our four human protagonists. At the beginning of the season, I wrote at length about just how ingrained this topsy-turvy narrative structure is and how it seems to be working against the forward motion of our heroes, but “The Ballad of Donkey Doug” goes so far in a new direction that at times it feels like a whole different show altogether.

Last week’s episode felt like a season finale in many ways, tying up the major character arcs that had been building in the previous three installments while, in typical Good Place fashion, simultaneously turning the world upside for each of our main characters. Learning of their fates as inevitable Bad Place citizens, Eleanor, Chidi, Tahani, and Jason all went their separate ways, with some handling the news better than others (I’m still not over Chidi’s Marshmallow Peep chili). By episode’s end, the gang came back together, resolving to spend the rest of their time on Earth using their forbidden knowledge to try to save as many people as they can. We pick up a week or two later—leaving the previous week’s Larry Hemsworth cliffhanger gag to be tied up by an offhand comment by Tahani after seeing her former fiancé on the cover of a tabloid—and the group splits into two halves, each of which feels plucked from an entirely different show. And neither of them feels quite like The Good Place as we’ve seen it before.

After more than thirty episodes of teasing, we finally get to visit Jason’s hometown of Jacksonville, Florida, and it does not disappoint. Michael and newlyweds Tahani and Jason head there in an attempt to lead the latter’s father to the light. From the moment they exit the airport, the swamp world of northern Florida reveals itself in murky swimming pools, buzzing swarms of people, and spontaneous chants of “Duval!” Where the Australia scenes have played up the fact that Earth is far more normal than previous supernatural environments the characters have inhabited, Jacksonville opts for extremes. I’m not sure which is better—the twenty-foot tall monster truck that crushes a taxi on its way through the airport drop-off lane, or the look of absolute astonished glee on Michael’s face at realizing that Jacksonville is, in fact, just as crazy as Jason made us all think.

Donkey Doug, who we saw glimpses of in the season premiere as a member of Jason’s dance crew, is revealed to be the father of our favorite Jaguars fan. Of all the twists this show has pulled lately, this one seems the most realistic—I legitimately believe that not only would Jason refer to his father the same way he’d talk about one of his drug-dealing buddies, but that his father would actually be one of his drug-dealing buddies. By the end of the episode, Donkey Doug is attempting a warehouse robbery with his son, and we understand why Jason is the lovable criminal we first met in hell. After several attempts at convincing his father to give up a life of crime in favor of an honest paycheck, Jason realizes that there’s no going back for him. He can try to save his equally zapped friend Pillboi, who’s still young enough to be swayed (and naïve enough to believe the NASA cover story Michael sells him), but other than Donkey Doug’s last-minute, half-noble sacrifice when the cops show up at the warehouse he and Jason are attempting to rob, the Mendoza patriarch seems unchanged on his path toward eternal damnation.

This is one of the first times we are seeing Jason in actual emotional pain. After all, the prospect of knowing a loved one will suffer eternally is not helped much by knowing they’ll be suffering alongside yourself. Seeing what is essentially a middle-aged version of Jason also makes me wonder what chance he ever had at making it into the Good Place at all. Do the beings responsible for judging humans take into consideration each person’s upbringing, including what preconceptions and norms they may be fighting against to do the right thing? In Jason’s case, it seems that a youth spent in the midst of excess, get-rich-quick schemes, and drug dealing determined his outcome before he had a chance to act any differently.

All of this—the foreign location, the emotional beats that Jason hits—makes this segment of the episode feel so foreign. It’s entertaining for now, but the prospect of a procedural comedy where each week the gang tries to save another person from eternal torture doesn’t feel all that appealing at the moment. My guess is that this is a short-term arrangement until the writers have bought enough time to bring about an endgame, but as far as subverting expectations, this half of the narrative certainly did so in a mostly positive way.

The Chidi/Eleanor/Janet part of the story, though, falls into more traditional sitcom territory, the likes of which the writers have typically avoided until now. Chidi, knowing how inept he is at keeping secrets, recognizes that he must break up with Simone to prevent slipping his knowledge of the afterlife and accidentally damning his innocent girlfriend. Of course, Chidi’s indecisiveness is what landed him in a world of eternal torture in the first place, so it’s no surprise when he panics about the minutiae of the break-up itself. What follows is a standard television trope—Chidi practices dozens of break-up lines to an unreceptive placeholder girlfriend, ultimately realizing that he must rip the band-aid off all at once with the real Simone—but, as this show loves to do, there’s some visual flare and technological tinkering from Janet thrown in just for fun. To episode writer Matt Murray’s credit, the quickly edited sequence of Chidi churning through simulated break up scenarios yields some great moments, like Eleanor’s spot-on imitation of both Simone and Janet, and Chidi’s break-up-attempt-turned-marriage-proposal. But, where the writers have previously taken a trope like this and turned it on its head entirely, for once they seem to play it safe so that none of our characters get too far ahead of themselves.

While I’m also sure the writers tried their hardest to figure out a way to keep Simone around (perhaps she could’ve been around for the cosmic door reveal at the end of “The Snowplow” rather than conveniently written out of the HeirBnB altogether), it’s still tough to see her go so soon. It’s a testament to just how good the writers are at giving us nuanced, refreshing characters in just a brief window of time, because Simone seemed to become an essential component of the group in a mere five episodes. She could shrink Eleanor’s ego, calm Chidi’s turbulent soul, keep Tahani and Jason’s drifting attention spans in check, and bring in a dozen delicious cupcakes all in a single afternoon.

Unfortunately, the way in which she was written off seems to leave little room for her return. When Chidi tries to explain how his feelings have changed, he makes it clear that he desperately wants to tell her the truth as to why, but cannot bring himself to do so. Now that Simone knows there’s something he’s withholding from her, the only way I can imagine her re-entering his life would be for him to come clean. Despite the ever-growing list of ways The Good Place has surprised me, I’d be absolutely shocked if they allowed a human being of completely undetermined fate to have their eternity spoiled through no agency of their own. Again, it’s obvious that the show couldn’t progress any further while keeping a main character in the dark, but it stinks to see her go out in such a cliché way. At least on her way out she gets to tell Chidi the same thing we’ve been thinking for two and a half seasons: “You’re so weird, man.”

When both halves of the Soul Squad have accomplished their respective missions, they regroup in Hungary with the intention of working on some “Al-Jamil family reconciliation.” However, when Janet reveals that Eleanor’s mother faked her own death, she shifts course and decides to return to the United States to confront the woman (or kill her, if she has her way with it). Given what we know already about Eleanor’s absent, self-centered mother, it seems like the questions we were asking earlier about the culpability of a person for their upbringing are going to come even more to the forefront next week.

One of my biggest concerns right now is the underutilization of Michael, whose character development has largely been put on the back-burner. Michael’s season two arc was wholly unexpected, and the tension regarding his true loyalties kept us engaged each step of the way. Now that the gang has accepted their fates, there’s very little tension to drive the plot. If they know they’re headed for the Bad Place, why should any of them fear Shawn, the Judge, or any other interdimensional being? All of this has left Michael on the sidelines, cheering the humans on, but getting little-to-no development himself. You’d think he’d be taking it a bit harder that he utterly failed at saving his four best friends, but instead he’s still being used for fish-out-of-water jokes.

Of all the episodes this season so far, this one left me the most torn. It was an interesting experiment for sure, splitting the gang in half and spending some time in relatively normal sitcom territory. But if this is a long-term plan, or even the plan for the next several episodes, I’m worried that the show is continuing to waste these great characters on mediocre plot contrivances. The Good Place is game-changing not merely because of its dismissal of traditionalist narrative sequencing, but because it manages to squeeze the most out of its performances. And when Eleanor, Chidi, and the rest of the gang are firing on all cylinders, they make us want to be better people too.