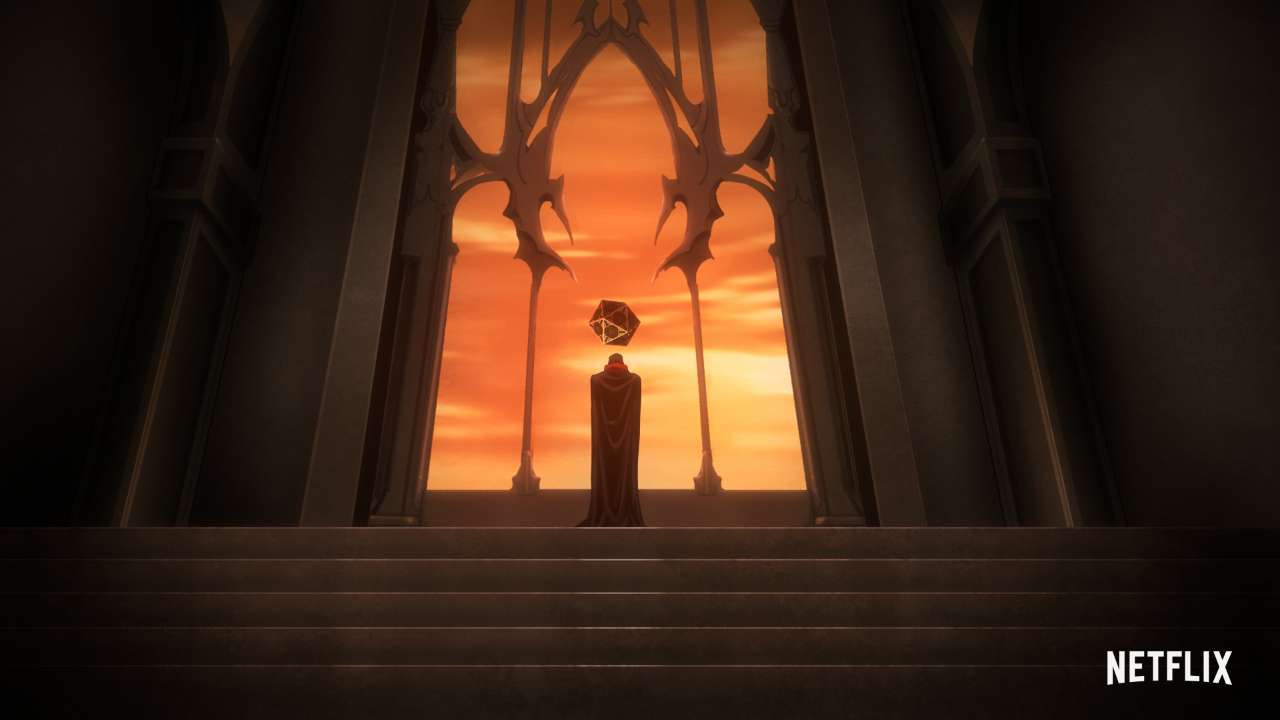 I am Vlad Dracula Tepes, and I have had enough.

Last summer, Netflix dropped a four-episode adaptation of Konami’s classic Castlevania video game series seemingly out of the blue. Written by Warren Ellis, best known for his comic series Red and the various Marvel storylines he has contributed over the years, the project had been passed around from studio to studio for the better part of a decade until finally landing at Netflix. Alternately grim and darkly hilarious, and boasting some of the slickest animation a streaming series has had to date, the short first season instantly cleared a spot for itself on the bare top shelf of successful video game adaptations in film and television.

After a similarly quiet production period of fifteen months, Castlevania finally returns for its second season more confident in its storytelling abilities and with one goal in mind—to steal vampires back from the manicured hands of tween pop culture and restore them as the bloodthirsty demons of the night they ought to be. The Dracula of this show is towering, calculating, and well-spoken. His thirst for blood isn’t owed to a primal desire or addiction, but to a fundamental hatred of humankind. Where Twilight squandered its time watching handsome vampires fall in love with attractive girls, Castlevania glories in what happens when such a condescending love is broken by mortal beings who dare to mess with an immortal monster.

In short, the first season was tied together by revenge. After his human wife is burned at the stake for false accusations of witchcraft, Dracula vows to murder every citizen of Wallachia. His son Alucard, recovering from a previous round that left him bloodied and beaten, plans to once again go head-to-head with the vampire king for the sake of his mother’s species. The people of Gresit secretly desire to take out the mystical Speakers for their supposed role in the recurring attacks on their city by Dracula’s demonic guard. And Trevor Belmont, having spent the bulk of his life as an enigmatic pariah, seeks justice for his family name and vindication for a life spent in hiding.

The limitations of a four-episode first season meant that Ellis had to focus his story around a relatively singular narrative, and Trevor Belmont seemed the most logical centerpiece. His pedigree in a line of outcast vampire slayers offered a quick glimpse into Wallachia’s past while simultaneously giving him the narrative propulsion to both be a significant and despised figure in cities like Gresit, where his ancestry precedes him. Richard Armitage’s gruff voice fills out the details of the solitary, drink-loving warrior and makes his sarcastic grunts enjoyable to boot. Besides the first episode, which functions more as a primer on Dracula’s bloodlust as a catalyst for Belmont’s adventure to come than as a proper introduction to Dracula himself, the early installments reveal the world of Castlevania through Belmont’s eyes almost exclusively. We discern the tension between overprotective clergymen and magical sorcerers at the same time that Belmont does. We spend so much time in Gresit because Belmont spends so much time in Gresit.

In season 2, however, the world sprawls in all directions, bucking the narrative restraint of Belmont’s perspective. Ellis’s storytelling brushstrokes flesh out a world brimming with lost souls, demoniac weaponry, and a bevy of conflicting intentions, none of which we are left to feel right about for any length of time. Castlevania goes from enjoyable video game adaptation vanity project to an epic whose world could rival the narrative possibilities of a Mordor or Westeros. And at the center of all these characters is the vampire lord himself.

The Dracula of this series is villainous in nature, but ultimately tragic in depiction. Rather than some creature of the night who preys upon humanity out of instinct, he spends most of his time hidden away in his study. His anguish in the wake of his wife’s death has made him solitary, moody, and angry. Season two begins with Dracula reaffirming his resolve to war against the people of Wallachia in front of his followers, but he quickly recedes to the shadows, only engaging his closest confidants in conversation. Over time, we realize that this vampire is driven by sadness, and, letting that grief overtake him on the regular, he fatally passes on much of his important wartime decision-making to his advisors.

The Dracula we see most often is the one who emotes in a way every bit as human as his late wife, but every so often we’ll see a blood-red flash of fiery passion in his eyes as his anger spills forth on those who oppose his vision. Ellis’s best decision for this season, in my opinion, is to spend so much time defining Dracula as a nuanced leader, one whose victory or defeat would feel bittersweet.

Early in the first episode we are also swiftly introduced to Dracula’s court, made up entirely of reanimated demon monsters and vampire warriors, with two notable exceptions: Hector and Isaac, two human Forgemasters with personal vendettas against their own race. We see the loyalty of these two tested repeatedly, especially when Dracula sets them at the head of his war council. Despite their mutual distaste for their own species, the two rarely see eye-to-eye on strategy, and we learn that Dracula himself deals differently with each of them.

The eager vampire Godbrand, who could easily have played the stereotypical rebel in the ranks, comes as a pleasant surprise, a vampiric parallel to Belmont’s self-interest. He’s a traditionalist as far as vampires are concerned, and he views the human population like cattle in that they’re a herd he would rather keep around to satisfy his blood craving. His loudmouth drunkenness is a stark contrast to Dracula’s reserved calculation, and he provides much-needed comic relief in the midst of some truly dark material. It seems as though his outspoken dissent might help him lead away a segment of troops dissatisfied with Dracula’s command, but he is drowned out by the hushed conspiring of a final notable member of the court.

The lone female adviser in Dracula’s inner circle sees all of the men around her as mere children, warring only to get their own ways. By her estimation, Dracula’s decision to wipe out the human race is selfish, leaving few “snacks” for the other vampires, and calling into question why he himself didn’t turn his human wife into a vampire. She instantly sees through the shallow understanding of Hector, who believes Dracula is performing a culling rather than an extinction, and manipulates him to achieve her own mysterious ends. Ultimately, while the men around her play the game of war, Carmilla wants to play the players.

Though Belmont is arguably still the show’s steady protagonist, the first half of the season sees him and his companions Sypha, the magic wielding daughter of a Gresit leader, and Alucard, the half-vampire son of Dracula, pushed to the side of the action to make room for introducing the many new characters in Dracula’s court. Like Carmilla, Sypha sees her two male companions as immature manchildren, a notion that is proved in part by the silent rivalry that exists between them. That being said, we still get some great moments of character development, like Belmont inviting Sypha into his confidence by candlelight in his family library. When the action is finally brought to the Belmont Hold, these three quickly prove their worthiness as Dracula hunters. And, boy, does this show know how to pull off action scenes.

Limited in Length, Epic in Scope

While dozens of thinkpieces have been written in recent weeks regarding the visual feast that is the ten-minute single-take fight sequence in this season of Netflix’s Daredevil, Castlevania is constantly offering up a buffet of graphical splendor. Sunsets that radiate orange for miles, candlelit villages covered in a fresh powdering of snow, castle corridors that feel so dank and lived-in you can almost smell them. The ever-glowing fireplace in Dracula’s study, a location that recurs as the only spot in the castle the vampire leader feels able to meditate, tosses beautiful shadows on the walls and faces of those who visit the room.

Due to the show’s brilliant writing and the scope of its worldbuilding, there are times during this season where it feels like it could work just as well, if not better, as a live action, hour-long drama series. Much of the first few episodes is spent listening to intricate debates and impassioned speeches that I wonder if the Castlevania franchise might have been a solid bet as a successor to the soon-to-be-vacant fantasy crown that Game of Thrones has occupied for so long (especially compared to Netflix’s upcoming The Chronicles of Narnia and Amazon’s attempts at a live action Lord of the Rings series). But when you see Dracula literally rip the head off an opposing vampire warrior or watch a deer have its face blown off in the impact blast of the newly-relocated castle, you realize why this show functions best as an animated product.

For a series that does its character development so well, it sure knows how to construct action scenes without feeling repetitive or, worse, boring. Hulking, fuzzy, winged, or otherwise demonic creatures produced by Forgemasters Hector and Isaac are brought down in battle by exploding whips, five-foot-long blades, and ice shards. Eyes are gouged out, faces ripped off. Blood flows like a rising river, and yet I am slow to call it gratuitous. The fact is that this show earns every drop of blood by backing it up with characters who are dynamic and a story that juggles its divergent elements with grace. For every discarded demon or fallen human there is an emotional or character beat to support it, something even shows like Game of Thrones are unable to accomplish in their million-dollar battle sequences.

Perhaps, the show’s ambition to be something as large in scope as Game of Thrones is its biggest flaw at the moment. The political posturing of Carmilla, Hector, Isaac, and Godbrand plays best when one character is attempting to sway another’s loyalty through an appeal to their troubled past or emotions. It doesn’t work nearly as well when the vampires are all crowding around Dracula’s fireplace throwing city names and strategic advantages out into the void for the others to consider. When Varys and Tyrion ramble endlessly about war tactics to Daenerys, it’s uninteresting but somewhat insignificant in the context of an hour-long episode. Here, a five-minute strategy meeting is a lot of burnt time when each episode is only twenty or twenty-five minutes long.

But when you see Belmont strike the Morning Star Whip or hear the booming voice of Dracula reiterate his extinction-level plans for the human race, you remember why this show is special in the first place—it accomplishes the impossible. It takes a dated video game premise and turns it into a meaningful drama. It borrows from a bevy of Japanese art styles to reveal a world that is equal parts beautiful and grotesque. It draws you in with flashy battle sequences and backs them up with solid character development.