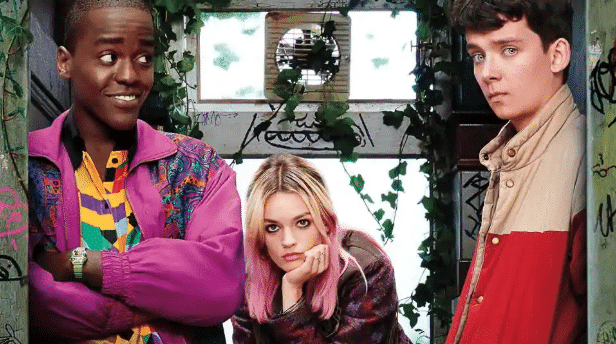 It has been a month since the Netflix release of Sex Education, a show dedicated to discussing all things sexually awkward. The flood of discussions, reviews, memes, and hashtags arising tell many stories. People are in love and it is not hard to see why. The show celebrates difference in sexuality, otherness, and knowing yourself. All with the beautiful colour-work of a John Hughes movie. 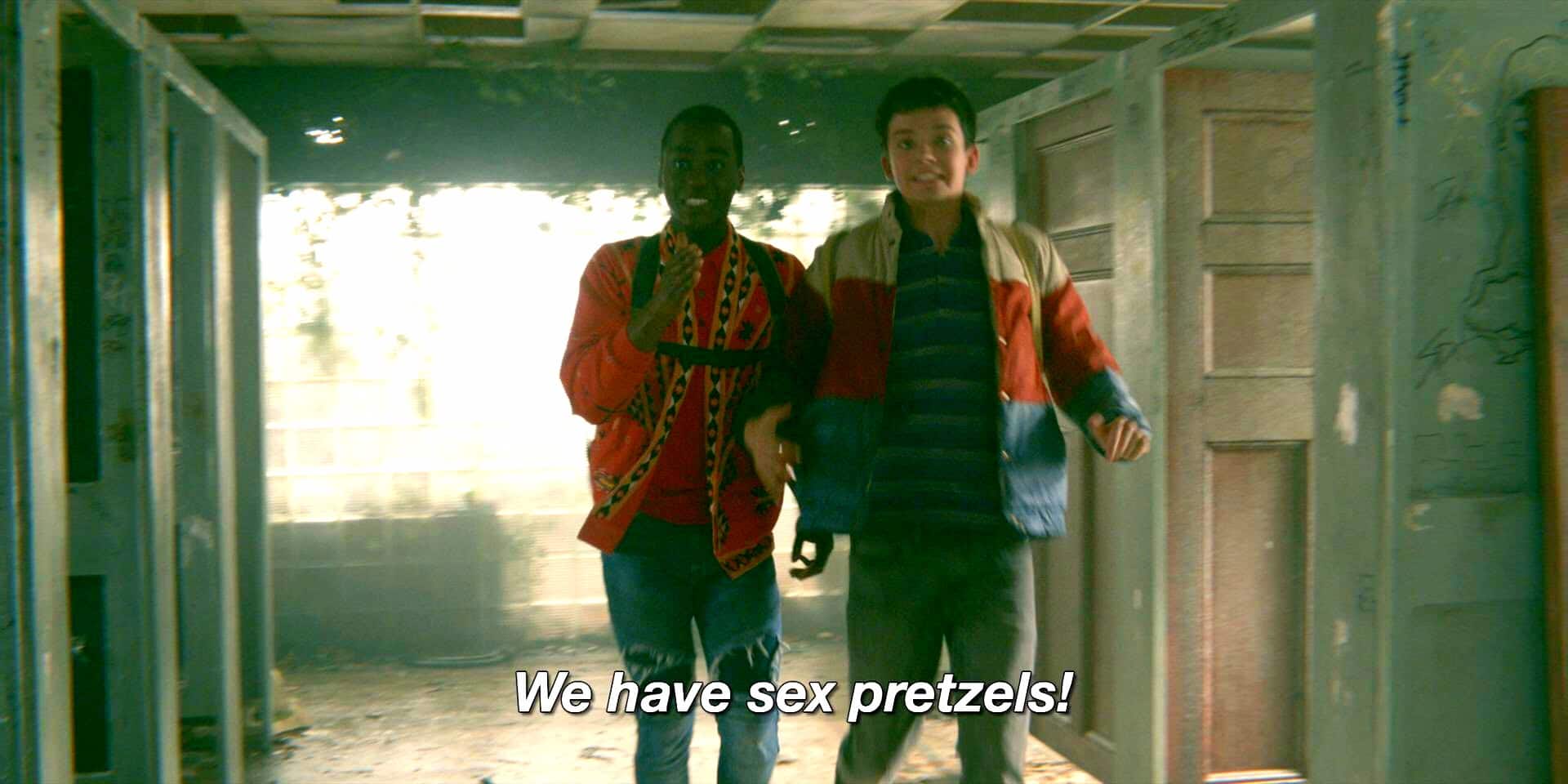 All the regular tropes of the schoolyard are here. The jock, the misfit, the geek, the popular kid. So far so mainstream. Yet it is the way in which they coexist that sets this show apart. Throughout its first season, creator Laurie Nunn shows deep affection for the characters and their journeys.

Protagonist Otis Milburn (Asa Butterfield) is a 16-year-old ‘dork’. Living with his Sex Therapist mother Jean (Gillian Anderson), Otis is satisfied to exist on the outskirts of school ‘society’. He has a playfully pessimistic aura that works beautifully with best mate Eric’s (Ncuti Gatwa) optimistic extrovert charm. When Otis teams up with whip-smart entrepreneur Maeve Wiley (Emma Mackey), things get really interesting. Otis’ new role as a sex therapist to teens throws him into the limelight.

While Otis coaches kids through their sexual queries, we get a broad sense of modern sexuality. Through the lies, half-truths, and moments of open honesty, conflicts that play out are true to life. It doesn’t appear to end with the ascent (or, arguably, descent) into adulthood. Even Jean’s role as a ‘Sex and Relationship Therapist’ underlines how adults are still looking for answers.

In Eric’s father’s acceptance of his queer lifestyle, the shift of the parent-child dynamic is really beautiful. Their conversation manages to traverse inter-generational lines of a migrant family, as well as dealing with Eric’s mode of dress. His father’s own struggle to fit in after emigrating causes concern for his son. Eric’s reply is perfect: “Your fear doesn’t help me, Dad. It makes me feel weak.”

Eric owning his queer style has hailed the show as incredibly inclusive of the LGBTQ+ community. Eric’s transformation through the course of the show is both heartbreaking and triumphant. The attack he sustains when dressing as a woman is powerful. Not least in how he mutes his dress sense afterwards. His journey back to being his self is joyful! Though a chance encounter and his faith, he learns that being yourself and owning your body is the key.

It is moments like this that really make the show. The show really digs into what it means to own yourself. Top moments include the infamous and heartwarming “It’s my vagina” assembly chorus, and Adam Groff’s (Connor Swindells) “this is my cock” bare-all speech. The message is just to be proud of your parts and the sum of them. The show is also careful to embed the idea that—whilst a grand gesture can be romantic—repeated unwanted advances are awkward and creepy. Consent is key, and we should get comfortable with saying no or yes. Some of the advice that Otis deals out also tackles the idea of getting to know your own body and having the confidence to ask a partner for what you want. 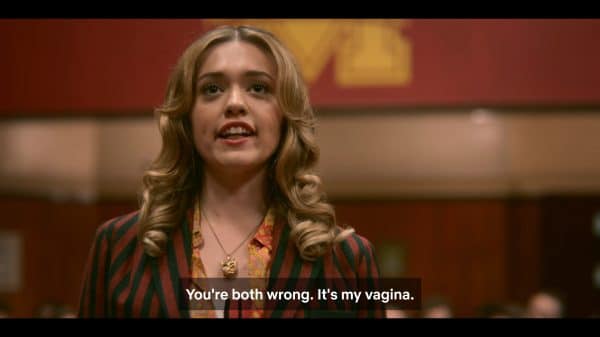 Throughout all of this, it is hilarious. Awkwardly embarrassing but terribly hilarious. Issues covered are not given the weight of a gritty drama, but handled as part of the bigger picture. When Adam calls Eric a “fag,” popular kid Anwar simply responds “you know that homophobia is so 2008? Totes passé” [sic]. Ideas of infidelity, abortion, and pro-life are covered with subtleties of tone. Dark moments are taken with the light and characters deal with their own stuff at their own pace.

The show creates a judgment detox. Everyone is different, we have stories and struggles that go on beneath our public life. We are all exercising our own autonomy. Across instagram and twitter, viewers continue to discuss everything from the confusion of Adam and Eric’s sudden sexual encounter (after Adam has bullied Eric all season) to whether or not Maeve Wiley is a good person in her relationship with Otis. Everyone is weighing in on the issues, trying to understand the characters more. One tweeter even voiced a personal wish that Otis was asexual. Instagram’s @otisconfess makes for very entertaining and divisive reading/baiting, while a hashtag exists for Sex Education in Brasil, Turkey, Russia, Italy, France amongst others. There is even a Twitter account for out of context quotes. This one is gold, by the way!

The show is adored by fans and has been well received by critics, but the pan-Atlantic feel was slammed by certain reviewers. Whilst Nunn’s love of Hughes certainly shows in the Moordale’s school halls and logo, the setting, people, and conversations are so quintessentially British. The word “shagging” crops up a fair bit, as well as slang phrases such as “he slipped and dropped the yoghurt” (he came). This overall mix has hailed the show as confusing by some frankly obtuse people.

At the very least, it doesn’t matter. At the very most, the implacable nature of the show is deeply entwined with the message. We are all different, yet we face similar issues. We all want to be heard, seen, understood. A show that borrows cinematic elements from the UK and America highlights the universality of the teenage condition. Otis grasps autonomy from his mum, and we all cheer for him! We know the struggle. Every character is relatable, each person struggles with their own autonomy. Growing up is as painful as it is fun.

Nunn shows that we can be shaped by our upbringing, but we can also teach others a thing or two, including those who gave us life. It shows how we can all shape each other (for better or worse) but in the end, all we can really be is ourselves.

Series 2 of Sex Education has been confirmed by Netflix. Until then, we can only re-watch and learn, and dream of Asa Butterfield. 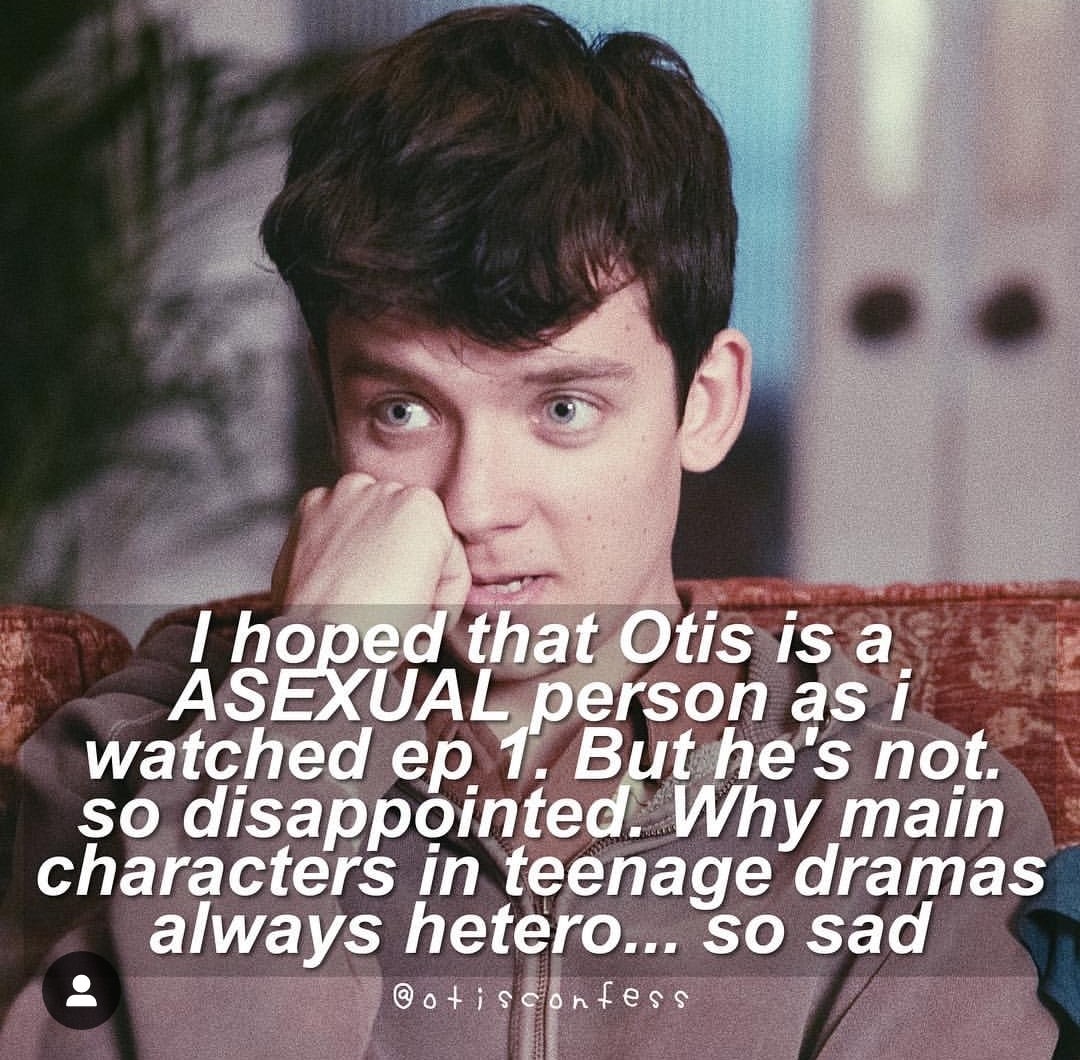