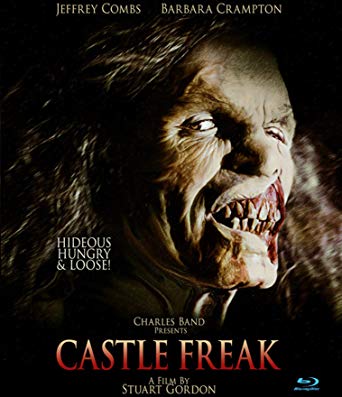 Hi, my name is Kelly and you may remember me from such bad ideas as “what is Knife+Heart about, based solely on the trailer?”, and “oh, not that.” This week, I’ve watched the trailer for Castle Freak, a movie which reminded me several times of the fact that it was made by Stuart Gordon, a painfully generic name that should, apparently, mean something of significance to me. Call this the first spoiler; it does not. The good news is the trailer is dated as hell, and I really, truly, deeply love a dated trailer. There’s just something about them….

Castle Freak – unless it pulls an aggressive left turn-seems to be pretty much what it says on the tin: a movie about a weirdo who lives in a castle-the titular Castle Freak. We catch a few glimpses of him in the trailer. He’s pretty gnarly, super pale, as one might expect someone who has resided exclusively in basements to be. He was, apparently, born with certain defects, and chained in the cellar. Listen, I’m not yet sure how it is that the arrival of a young American family, headed by the guy from Re-Animator finally inspired ol’ Castle to break free of his chains and eat all the cats (because yes, the trailer heavily implies he eats a cat, and by the way, what was he eating before he could access delicious kitties? I have questions….), but since speculation is the name of my game, here’s what I hypothesize: Castle spots the late teenaged daughter of Re-Animator, falls in love with her, and wants to take her for his bride.

Filled with the kind of bizarre strength that only comes upon a man when he plans to BlueBeard a woman, he is able to break free of the bonds that restrained him for so long. It’s a real love story, you see. And like all love stories, it requires that CF kill everyone that stands between him and daughter of Re-Animator. These are definitely the names used in the movie. Re-Animator calls in the local cops, but ultimately it will fall upon him to kill CF…maybe he will utilize the fact that he probably looks like the father who originally imprisoned CF lo, those many years ago. Huh. I was, originally, a bit dubious about this one, but now I’m kinda into it. Guys, is Castle Freak a great movie? A touching rumination on the scars and damages our parents accidentally inflict upon us? A true examination of the necessity of love in even the most hideous? I doubt it! I suspect it’s probably an exploitation film that toys with those themes and turns them into something pretty grotesque. But I’m here for that.

Join me Thursday to discover whether Castle Freak is, in fact, a Beauty and the Beast tale, or if I just wrote a better movie than it actually is.

Available on Shudder, for your streaming pleasure!

‘Archer: 1999’ Makes a Strong Case for Fulfillment over Purpose (If You Look Hard Enough)

Adobe Reader: The Specifics and Main Features of the Application