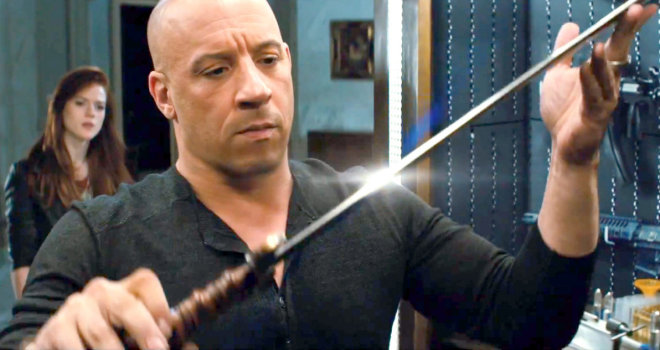 During our full week of New York Comic Con coverage we’ve talked about a lot of exciting projects. But many of the biggest panels were related to television shows both past and present. NYCC did cover some upcoming films though. In fact, last weekend two Hollywood stars brought their upcoming movies to the Con. It also just so happens that both are perfect for that Halloween enthusiast in all of us. On Saturday, the ride or die king, Vin Diesel introduced the crowd to his latest venture. An action/fantasy film with everything from flaming swords to Diesel wearing a giant beard, The Last Witch Hunter checks all the boxes. Then on Sunday, Jack Black traded his guitar for a typewriter when he brought the cast of Goosebumps with him for a panel. While we inch closer to Halloween, it turns out that NYCC had us covered with new titles to get us in the trick-or-treating spirit.

You Know Nothing, Dom Toretto

You haven’t heard how loud a crowd can scream until you’ve witnessed Vin Diesel being introduced to a group of rabid fans. Best known for The Fast and the Furious movies, Diesel readily admits he is among his people at Comic Con. The Dungeons and Dragons junkie brought up his fandom multiple times during the hour long panel for The Last Witch Hunter, but each time he delayed for a beat as if he was deciding whether or not he was revealing too much of a deep secret. But with each reference to his character, Melkor- a name he “borrowed” from JRR Tolkien’s The Silmarillion, he seemed to grow more comfortable with the fact that he and the crowd had shared interests in the fantasy world. It was this that he said drew him to The Last Witch Hunter. A fan of the genre, this seemed like the right project for him take on. He even confided to the crowd that after going through a tough year filled with loss, the project was a therapeutic one for him. He didn’t go into detail about that hard time, but he alluded to the loss of Fast and Furious costar Paul Walker, who died in November 2013.

While Diesel’s presence drove the conversation, which included questions from MTV’s Josh Horowitz and fans in attendance, the rest of the panel would have drawn a ton of fans on their own. Director Breck Eisner was there along with Diesel’s costars Elijah Wood and Rose Leslie. Leslie, best known for playing Ygritte on Game of Thrones, almost made it through the full hour before being asked to say her most famous line. She conceded and dropped her voice an octave before telling Jon Snow that he knows nothing. Wood had to sacrifice a few geek points when he admitted that Diesel would definitely beat him in a Tolkien trivia contest. But the Frodo actor did divulge a great plan to bring himself into the world of The Fast and the Furious. According to Wood, the ninth movie in the franchise will hit the right time frame for an illegitimate, adult child of Dom Teretto to come into the picture. He was obviously kidding. But that’s a plot twist I would absolutely love to see even if there is zero resemblance between the actors.

Among all the fun conversation of past projects and Dungeons and Dragons, the group did actually discuss the movie too. Diesel plays an immortal witch hunter attempting to stop a group of witches from killing a whole lot of people. The scenes screened for the audience included a lot of action, big effects, and plenty of Diesel acting badass. The Last Witch Hunter will be released in theaters on October 23rd. Oh and you might as well get on board because according to Diesel, the studio has already decided they want a sequel.

But a week before you get to see witchcraft and mystery with Hunter, Jack Black will battle monsters in a more family friendly setting for Goosebumps. The movie draws from RL Stine’s collection of children’s horror books, but instead of adapting just one story for the big screen, the plot has Black playing a fictionalized version of Stine whose monsters come to life off of their pages. This way the characters get to battle a number of the most memorable haunted creatures. When Black took the stage to join director Rob Letterman and costars Dylan Minnette, Odeya Rush, and Ryan Lee, he reprised his role from the film by pretending to be Stine. The real author however was there too. Both Stines, in all black and glasses, had some funny back and forth before Black broke character.

The main stage crowd was visibly younger than many of the other panels, a result of Sunday being kids day at NYCC. But even though the subject of the film is “scary,” the young audience suited the film. Stine (the real one) spoke about the movie successfully finding the balance between scary and funny, a blend that he says he always looks for in his writing. The clips shown at the panel confirm that monsters do threaten the characters, but the audience is much more likely to laugh during those scenes than shriek. Unless you are Ryan Lee, whose character gives out a high-pitched scream when he encounters the Abominable Snowman from Pasadena in the film. This clip got a great reaction from the crowd at NYCC. In fact, it seems that scream wasn’t originally in the script. But Lee’s improvisational fearfulness is a funny moment.

RL Stine said that a movie based on his work has been in development for 20 years, but conceded that he left the details of the project to the professionals. He does however turn up for a Stan Lee like cameo at some point. So keep an eye out for that. Another interesting fact for fans of practical effects in film is that Slappy, the evil ventriloquist dummy, was an actual dummy that was built for the movie. A real ventriloquist also operated him. Maybe the movie will bring about a ventriloquism renaissance. Probably not though. Goosebumps is in theaters now.

We’re in that time of year where studios strategically place their projects that can be connected to the spooky imagery of Halloween. These two films, The Last Witch Hunter and Goosebumps, are very different from each other. But they definitely pique my interest in that regard. Do you want to see a bon-a-fide action star take on witches with a flaming sword or a quirky comedian battle the (fictional) demons of your childhood? NYCC gave us a lot of reasons to cheer. But unlike all of the projects still in development, we don’t have to wait long to see these two movies. Plus, am I the only one thinking that Jack Black’s RL Stine looks like a simple but effective Halloween costume? It would be a lot easier than lighting a sword on fire to play the last witch hunter. (Disclaimer: This author does not condone attempting to light swords on fire.)