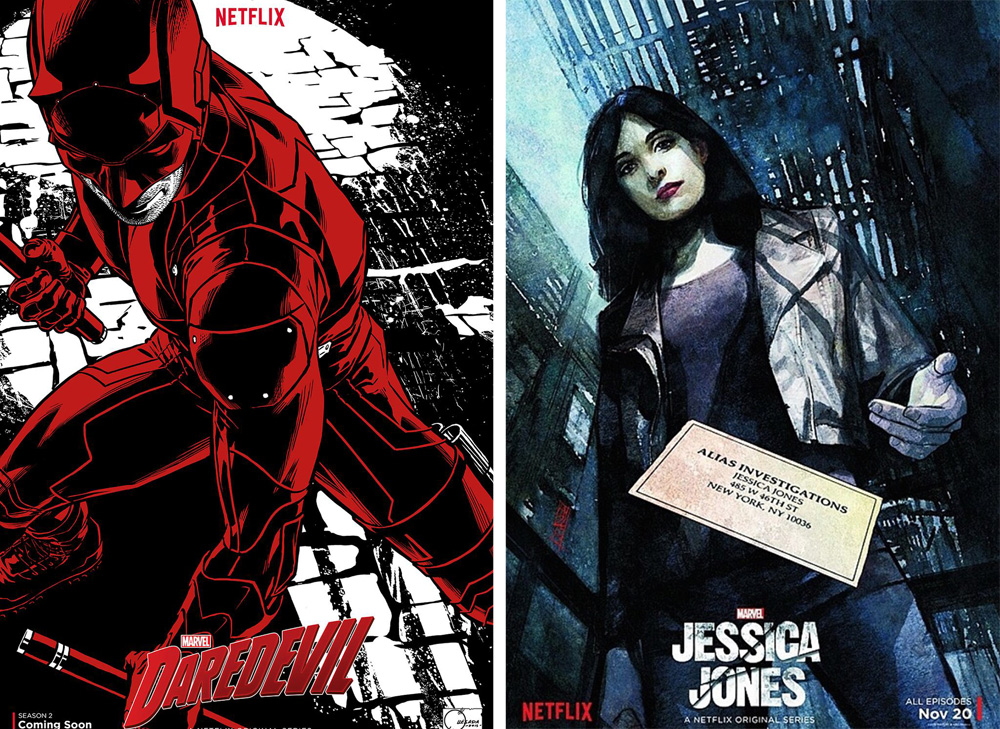 The impressive spectacle that is New York Comic Con hit its apex late Saturday afternoon when the main stage was conquered by Marvel and Netflix. The casts of both the hugely successful Daredevil and the upcoming Jessica Jones series greeted the packed theater to deafening cheers. I’ll admit that even this fairly reserved writer screeched like a One Direction fan when Jon Berenthal, who plays Frank Castle/ The Punisher on season two of Daredevil, sauntered in during the exclusive trailer that led off the panel. But this wasn’t the only home run hit by the television branch of Marvel Comics, who made sure their presence was felt at their hometown con. This panel had all the buzz and two huge lines of fans early on Saturday morning attempting to get a wristband that would guarantee them a seat in the theater.

Marvel’s head of television, Jeph Loeb took the stage for the second straight afternoon at NYCC Saturday. But this time his focus turned from the SHIELD agents on ABC to The Defenders, who are slowly building their presence on Netflix. Before the casts were introduced and the panel kicked off, Loeb called out three of his stars. Charlie Cox, Krysten Ritter, and Mike Colter came out to a standing ovation. The three, who play Daredevil, Jessica Jones, and Luke Cage respectively, make up 3/4ths of the eventual street level super team, The Defenders. Iron Fist has not been cast yet. He will be the last piece of that puzzle.

The Daredevil portion of the event came first. A highlight reel from season one and a short teaser for season two was shown. That clip has since been released online. The highlights came with the quick glimpses of new cast members Elodie Yung (Elektra Natchios) and Bernthal. To be clear, the glimpse of Bernthal is the back of his head and a barely audible utterance of “bang.” It wasn’t much, but it was like an early Christmas gift for the 3,000 fans in attendance. The crowd was so loud that it was actually impossible to hear the dialogue.

The panel discussion had Cox joined by Deborah Ann Woll (Karen Page), Elden Henson (Foggy Nelson), Bernthal, Yung, showrunners Doug Petrie and Marco Ramirez along with Marvel Chief Creative Officer Joe Quesada. A question and answer session with the audience revealed some interesting perspectives. Yung mentioned that she is skilled in multiple martial arts including holding a black belt in karate. So basically she’s a perfect choice for Elektra. Bernthal appeared to get slightly emotional when talking about how important his character is to fans, law enforcement and members of the military in particular. Castle is a military veteran in the comics having served in the United States Marine Corps. He also said he has been frequently approached by fans with the helpful message of, “You better not mess this up, man.” An alumnus of The Walking Dead, Bernthal knows a thing or two about adapting comic book characters to television.

In addition to some talking in circles to avoid spoilers, another highlight had Henson give a smile when a group of fans began to “quack” at the actor who starred in the three Mighty Ducks films. Also, Cox spoke about his training with a coach to prepare for the role as the blind hero and the impact of the character within the blind community. But possibly my favorite moment of the night came when Loeb consented to replaying the season two trailer to wrap up the time with Daredevil. The cast stood up to get a better view and remained on stage to see the clip. There was just something exciting about seeing these TV stars watch the clip in anticipation along with the fans. According to Loeb, they had not seen it before. This is where the crowd was able to decipher that line that rang through Comic-Con. “Bang.” That one word sums up the trailer pretty well. Season two will air on Netflix in 2016.

The cast was then switched out for the stars of Jessica Jones. At this point not much was known about the show because of the Marvel shroud of secrecy. But among the large cast was Ritter, Colter, Rachel Taylor (Trish Walker), Eka Darville (Malcolm), Erin Moriarty (Hope), Wil Traval (Will Simpson) and showrunner Melissa Rosenberg. It was revealed that Carrie Ann Moss, also in attendance, would be playing Jeryn Hogarth, a character that is male in the comics.

This half of the panel avoided fan questions, which makes sense since almost every detail is currently a spoiler. During Loeb’s questions to the cast, Colter revealed that he is currently in production on Luke Cage and that Jessica Jones has a different feel than the show that shares a name with his character. Loeb mislead the crowd a bit when he explained that there was an empty seat on stage for former Doctor Who star David Tennant, who plays the show’s antagonist, Kilgrave. But just as the “Whovians” in attendance were thinking he was going to emerge from backstage, Loeb burst their bubble. But there was a funny video greeting from Tennant, who excitedly told the crowd they would be seeing a world premiere clip.

That clip was actually the full first episode of Jessica Jones, which won’t hit Netflix until November 20th. I won’t spoil any details for you, but the episode felt different than Daredevil while still being connected in how the setting of New York is woven in as a character of sorts. (Wow, that was so vague it sounds like I work for Marvel.) There was definitely less street fighting than Daredevil. But when the violence hits, it is intense. I actually found it to be quite jarring and creepy. There was also a sex scene unlike anything seen in the Marvel Cinematic Universe to this point. Like Daredevil, this is definitely not suitable for all ages.

These characters who will make up The Defenders sure seem to be well separated from The Avengers, who reside up in their Manhattan high rise. That’s okay though. These folks seem more like public servants than action figures. So it only makes sense that they were among the people of New York on Saturday. That seems to be where they belong.