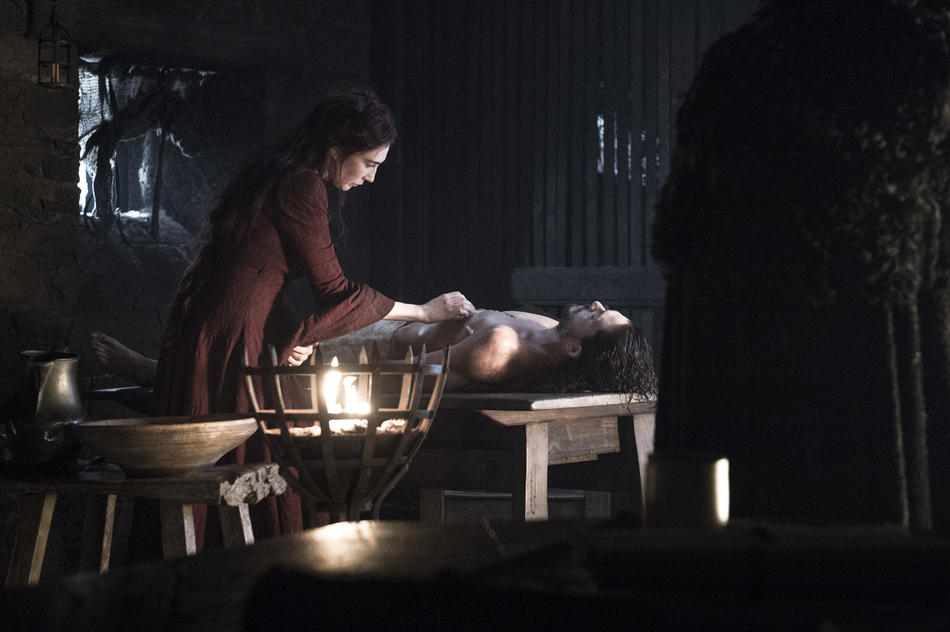 Guys, it happened. It really happened. Jon Snow has returned to the land of the living! I’m so happy I could kiss him. …Well let’s be honest. He’s probably pretty stanky after being a corpse for a few days. But I’m so happy I could give him a spirited handshake! With the Castle Black storyline ending both episodes so far with huge revelations, the Wall has definitely caught our attention. But we did spend over 50 minutes of “Home” with Lord Snow still dead on a table. So let’s break down the rest of the episode. Here’s our Game of Thrones recap for week two.

It’s pretty clear that the return of Bran in season six is going to be one of my favorite arcs over the next few months. Bran, Hodor, Meera, and the Three-Eyed Raven sat out the crowded season last year. But on their return, they made up for lost time with a pretty compelling flashback. The Raven and Bran visit the Winterfell of old in a time where young Eddard practices his swordsmanship with his brother Benjen while sister Lyanna practices her riding. They even try to enlist a stable boy, Wylis, to train with them. Bran immediately recognizes him as a young Hodor who can still speak. So this is the perfect opportunity for HBO to introduce a Hodor spin-off series. But it’s more likely we’ll just learn more in future visions. After returning from the past, the Three-Eyed Raven tells Bran that they can’t stay in memories too long for fear of “drowning” in them. Meera is still quite bummed after her brother, Jojen, died helping them find the Raven in season four. She seems like she wants to leave. But one of the Children of the Forest hanging around tells her Bran will need her for protection and she’s still necessary.

Ramsay Bolton is the worst. Is he the worst ever on Game of Thrones? Possibly, but I swore that Joffrey would always be my most hated character and I’m going to stick to that. But Ramsay just plain sucks. At Winterfell, Harald Karstark tells Ramsay and Roose Bolton the news of Sansa’s further escape. The Karstarks are apparently with the Boltons because Robb Stark lopped of Rickard Karstark’s head three seasons ago. Ramsay suggests that they mount an offensive on Castle Black and kill Jon Snow so that no Starks would remain. They obviously didn’t get the memo that he’s dead. Roose says that attacking the Night’s Watch and killing the Lord Commander would turn the North against them. Unlike us, Roose apparently doesn’t realize that sound logic doesn’t work on his loony son. But hold on to the battle plans, the Maester is here to announce that Walda has given birth to a son. How nice! Congrats, Lord Bol… Never mind, Roose Bolton is dead. Ramsay, giving his father a hug shanks him and kills him. Their positioning at that moment looked awfully similar to when Roose murdered our King in the North, Robb Stark at the Red Wedding. That must be the proper technique taught in the “Murder and Betrayal Handbook.” (Available at all local Barnes & Nobleman stores.) After declaring himself Lord Bolton, Ramsay lures Lady Walda and his newborn brother to the kennels and releases the hounds on them. It’s an incredibly sad moment. But at least they didn’t show too much of the brutality. Killing his family for political gain didn’t work out for Stannis last season. I hope it goes even worse for Ramsay.

We get a short scene to be reacquainted with Brienne and Sansa somewhere near Winterfell. Brienne tells Sansa about her encounter with Arya and the Hound. Sansa is just happy to hear her sister is alive. Theon, who finally has a good thing going for him, decides that he doesn’t want to go to Castle Black. He doesn’t want forgiveness for the bad things he’s done. So with Brienne and Podrick taking over the protection duties, he’s going to return “home.” I assume he means the Iron Islands. But if this is just a brainwashed response and he goes back to Winterfell, I’m going to be quite bummed. Just go to Pike, Theon. It’s nice and rainy… and damp… and miserable… Everyone there is super… annoying… and cocky… and angry all the time. Okay, maybe don’t go there.

The Iron Islands and Their Shoddy Bridges

Speaking of the Iron Islands, we haven’t been there in a long time. Theon’s daddy dearest, Balon Greyjoy argues with Yara Greyjoy about the now failed attempt at conquering lands in the North. Well the ironborn did take a few places, but they have since been taken back. Yara advises him to end this “war” since they are much weaker on land than on sea. Balon refuses since apparently his favorite thing in life is to stage unsuccessful rebellions. His most famous one led to the death of his two eldest sons and Theon being taken as Ned Stark’s ward. So after some threats directed toward Yara, Balon steps outside to cross a quite rickety bridge. But he’s stopped by a hooded figure. We learn from their contentious chat that it’s Balon’s brother. The Internet tells me his name is Euron. You know a dude named Euron has to be tough. That’s one step away from being called Feces. Well Balon and Euron argue a bit. Balon tries to stab Euron and then Euron throws Balon off of the bridge to his death. At Balon’s funeral, Yara swears revenge on whoever the killer is. A different uncle, not Euron, reminds her that she won’t necessarily inherit her father’s position though. That’s up the “Kingsmoot.” Whatever the hell that is. It’s probably an election or committee of some sort. But why call it that, when it can be a “Kingsmoot?”

Let’s head south to the capital where one of my favorite Westerosi traditions is in play, the practice of putting stones with googly eyes on dead bodies. This time it’s Myrcella. I think Myrcella might actually have more screen time as a corpse than she had as a living person. Jaime and King Tommen the whiner are speaking next to the body when the High Sparrow shows up. Jaime looks like he’s going to kill the dude, but then the Faith Militant guys fill the sept. Outnumbered, Jaime reserves his revenge for another day. Tommen forbids Cersei from attending the funeral in an attempt to protect her from further punishment and/or embarrassment. She accepts this even though the Franken-Mountain is standing by waiting to kill some people. We actually do see him kill a drunk guy who was telling stories about flashing his business to the Queen. But we weren’t really questioning the Mountain’s ability to kill, were we? Tommen visits his mother and apologizes for keeping her in the Red Keep and the whole walk of shame business. Then he makes the request all the tough, successful leaders have before him. “Mommy, teach me how to be strong.” What a pathetic boob.

Braavos has been a slow burn. Episode two gives us another short scene where the Waif visits Arya. Their second stick fight goes much like the first one. Arya gets whooped on. But she seems to be trying harder this time. The Waif is replaced by Jaqen, (this whole faceless thing is trippy) who asks Arya who she is. She says “no one” and continually does so even when Jaqen tempts her with food, shelter, and the return of her vision. She doesn’t take the bait. Jaqen leads her away saying she no longer needs to be a beggar.

In Meereen, the Daenerys brain trust (sans Daenerys) discusses the aftermath of the Sons of the Harpy setting fire to all the ships in the harbor. With Varys, Missandei, and Grey Worm, Tyrion says the new mantra of every cocky bro you’ll ever meet. “That’s what I do. I drink and I know things.” It is a great line. Varys informs the group that the masters have reclaimed Astapor and Yunkai. So Tyrion decides the dragons are necessary to show their strength. In a tense scene with some top-notch CGI, Tyrion unchains the two dragons that remain in Meereen. They don’t attack him, so that’s good. But what they are going to do beyond that, we still have no idea.

Tensions come to a head at Castle Black as Alliser Thorne orders the door be broken down to kill the loyalists (or mutineers depending on whose side you are on). But right then, Edd returns with Tormund and the Wildlings. Even the giant Wun Wun is there to slam a bad guy up against the wall. A few Thorne supporters get killed, but overall the conflict is halted. Thorne and Olly get put in the dungeons. This seems like a great victory except for the fact that Jon is still, in fact, dead. But Davos finally just asks Melisandre if she can do anything to fix that. He tries to rebuild her confidence by bringing up the fact that she survived drinking poison and birthing the Renly murdering shadow. She says she can’t bring Jon back, but she saw a guy who did raise the dead once. We know that was Thoros of Myr back in season three when he resurrected Beric Dondarrion. Melisandre says she doesn’t have that power, but has never actually tried.

So with Davos, Edd, and Tormund watching, Melisandre attempts the ritual. I remember Thoros just saying some words, but Melisandre has a whole ceremony she does. She washes Jon’s body. Then she cuts off some of his hair and beard then throws them in a fire. Haircuts are rare in Westeros. I don’t think Jon has had one throughout the show’s entire run. So this is a big deal in itself. Melisandre mutters in a different language for a while, but it doesn’t seem to have worked. One by one, the group leaves the room except for Ghost. The wolf suddenly sits up right before Jon opens his eyes and gasps back to life. His first words, “Who in the seven hells, cut my hair?!”

Okay, he didn’t say that. But, man what an episode. The preview for next week looks epic. So we’ll break all that down in one week’s time. I had a feeling Jon was going to come back, but I still cheered when it actually happened. Game of Thrones usually forces us to dwell on the saddest, creepiest events. But this episode counteracted Ramsay’s brutality with the event we’ve all been waiting for. Plus, we had the return of Bran, the dragons, and the Iron Islands. Overall, it was quite the hour of television.