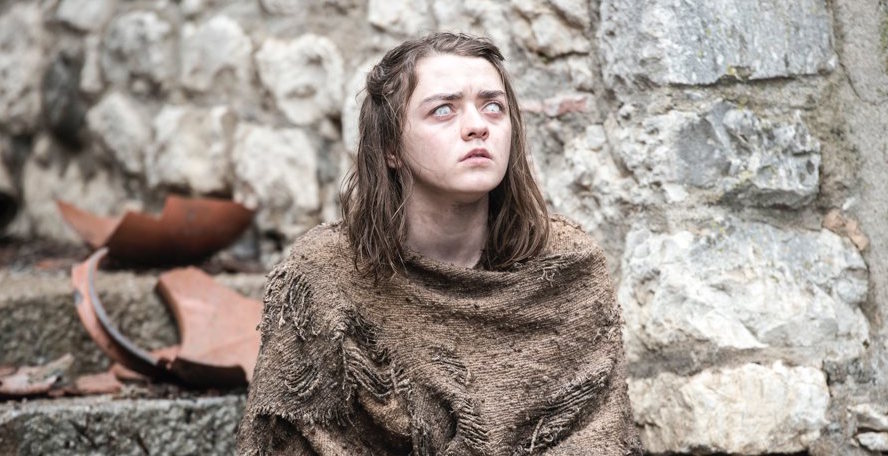 Welcome back to Westeros, folks. It has been over ten months since the season five finale of Game of Thrones aired and there has only been two questions on the minds of fans throughout the realms of men. 1. Is Jon Snow dead? 2. Are any of our characters secretly elderly and only appear young because of magic? And if so, will they be getting a nude scene in all their elderly glory? I can officially answer now. Yes and yes! Let’s dive right into our Game of Thrones recap for the season six premiere episode, “The Red Woman.” 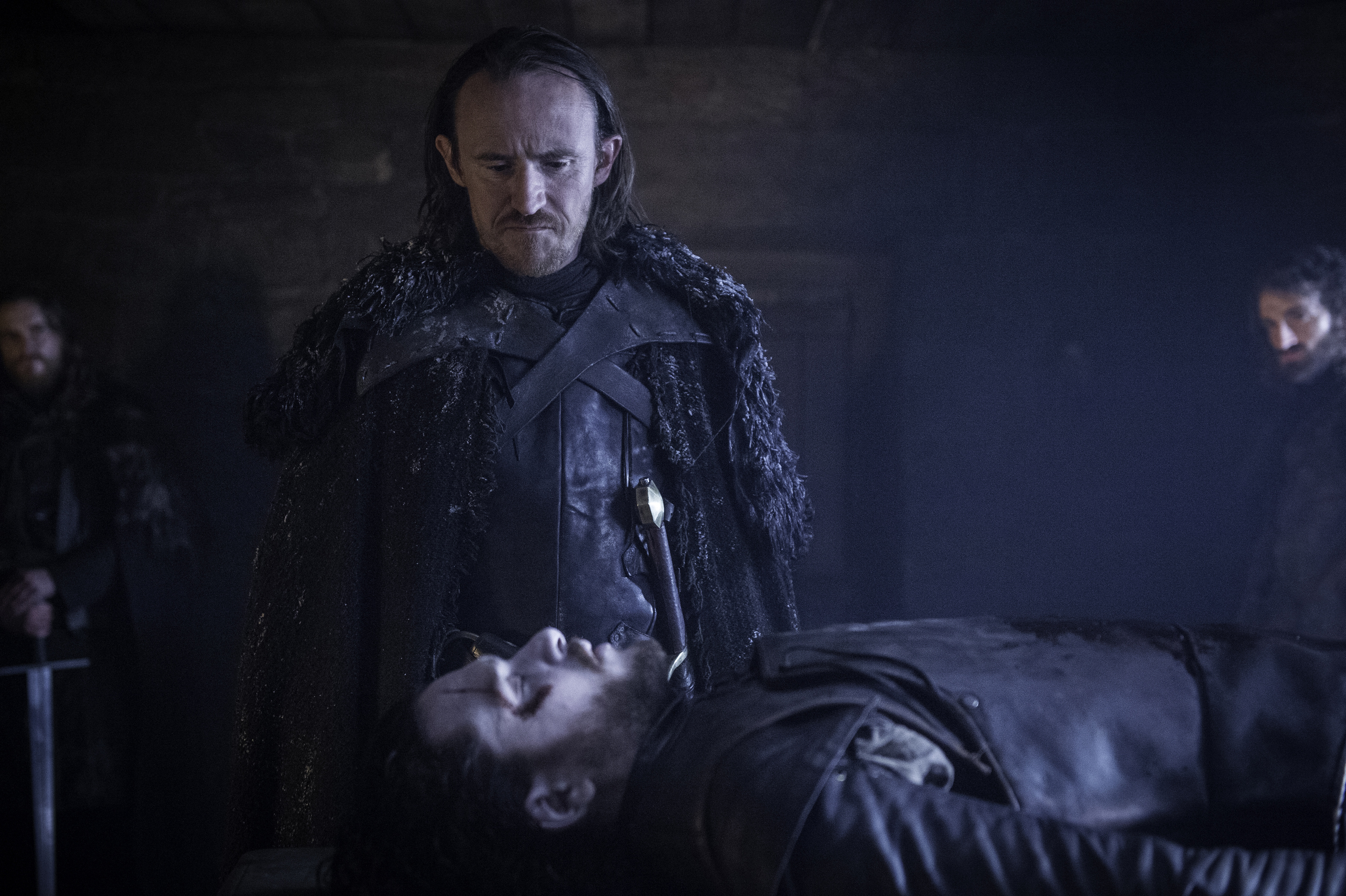 Game of Thrones- The Red Woman (Source: Watchers on the Wall)

Bolting from the Boltons

The episode began with the longest “previously on” sequence I’ve ever experienced on television. I think it clocked in at 54 minutes. Or maybe it only felt that way because I just spent the last two months re-watching the series in preparation of season six. The opening credits didn’t reveal anything too exciting in terms of locales. All the featured cities are places we already know. A large part of the episode was devoted to Jon Snow’s corpse, but we’ll talk about that in a bit.

Down the Kingsroad from Castle Black in Winterfell, Ramsay Bolton still sucks. Standing over the body of the deceased Myranda, he says some (kind of) nice words about her. The Maester asks him if he should bury or burn her body. Ramsay, ever the romantic, tells him to feed her to the dogs. Roose Bolton goes on to remind his son that they need Sansa to unite the North behind them if they ever have to fight the Lannisters. Call me pessimistic but will all the North men really rally behind the Boltons just because Sansa Stark is living with them? Well they murdered our King in the North and all of our bannermen outside of a wedding, but Sansa’s there. So, cool, we’re in! I don’t know about that. Ramsay says he’s sent some men after Sansa and Theon.

So is he Theon again because he made the decision to help Sansa on his own? He still talks and moves like Reek. So for now he’s TheReekon. Well whatever his name is, he leads Sansa through the snow near Winterfell with the sounds of hounds chasing them in the distance. Sansa whines the whole time and claims she can’t walk through the cold stream. I wonder if the scripts give specific lines for Sansa or do they just say, whines incessantly. I say that, yet she has improved since previous seasons. Right when the Bolton trackers catch up to the pair, the Batman and Robin of Westeros show up to save the day. Brienne takes down a bunch of the Bolton guys even after being thrown from her horse. Podrick… well he tries to kill one. Theon ends up saving Pod’s life by killing the Bolton attacker. Brienne pledges her sword to protect Sansa and, sure enough, she accepts this time. All it took was being sold off by Little Finger, repeatedly brutalized by Ramsay and chased by ravenous dogs through the snow. But finally, Brienne has a Stark to protect.

Does anyone actually care what happens in Dorne? My interest in this storyline had its eyes gouged out and exploded along with Prince Oberyn in season four. This week, Ellaria Sand makes her move. When word of Myrcella’s death reaches Prince Doran, Ellaria and the Sand Snakes murder him, Areo Hotah, and Trystane. The guards just stand by and watch. So apparently a revolution is in full swing in Dorne. …Still not interested.

Another Lion Bites the Dust

Speaking of Myrcella’s death, King’s Landing is an odd place these days. Cersei, fresh off her walk of shame, is excited to hear of her daughters return. But nope, she’s dead. Cersei tells Jaime about the prophecy she received from the witch when she was a child. (We saw this as a flashback in last season’s premiere.) She would have three children and they would have golden crowns and golden shrouds. It seems that Cersei’s mood post child death matches the child. When Joffrey died she was a crazed lunatic. When Myrcella died, she’s introspective and heartbroken. If Tommen goes on to die, expect her to become a whiny biotch. Jaime promises revenge on their enemies. Across town, the High Sparrow visits Margaery. She asks about Loras, but is given no information. It almost seems like this scene was just a reminder that these two characters are still alive.

I’m really liking the current regime in Meereen. Tyrion walks around spouting off phrases in Valyrian like he’s me in 10th grade Spanish class. Varys plays the role of my teacher correcting his mistakes and doing his best to not call him an “idiota.” The streets of Meereen are near empty because of the presence of the Sons of the Harpy. A few beggars, a bunch of broken carts and a Red Priest, but there’s not much going on. But seriously, there are a lot of broken carts. After Dany left did the Sons of the Harpy announce their next target was wooden carts? Tyrion and Varys speak about Daenerys’ growing list of enemies. The Spider promises he will discover the identity of the leader of the Sons of the Harpy. Right on cue, all the ships in Meereen’s harbor have been set ablaze.

We get a short scene in Braavos to remind us of Arya’s plight. She’s blind and apparently now she lives on the streets. The Waif shows up and challenges Arya to a stick fight. Obviously Arya loses because she can’t see. It so happens that’s a key aspect of being blind. Last season the Waif changed into Jaqen at the end of the season, but I guess this is the face she chooses when she wants to annoy Arya. The Waif tells Arya she’ll return tomorrow.

Daario and Jorah are somewhere in the Dothraki Sea competing on a very slow version of The Amazing Race. Their objective is simple. Find Daenerys. Unfortunately she’s been taken by a Dothraki horde. She’s brought to meet Khal Moro who is apparently Moe in the Dothraki version of The Three Stooges. He uses the usual Dothraki pick up lines. Blah, blah, mount you. Blah, blah cut your head off. We then get a sit-com like back and forth where Moro and his blood riders debate what the best things in life are. He argues it’s seeing a beautiful woman naked for the first time. But pump the brakes, Moro. Dany reveals she was married to Khal Drogo. So Moro backs off and says he will take Dany to Vaes Dothrak to live out the rest of her life with the other Khal widows. I imagine they play Dothraki shuffleboard and watch The Price is Right all day. Sounds kind of fun actually.

Ser Davos and the Muttoneers

Now let’s get to the main event at Castle Black. Prompted by Ghost’s howling, Ser Davos leaves his room to find Jon lying dead beneath the traitor sign. It hasn’t been a happy few days for Davos since his entire storyline was murdered at the end of last season. With the help of a few loyal Night’s Watch brothers, Davos takes Jon’s body and barricades it in the Lord Commander’s office. Watching Edd realize his main man Jon is dead is a pretty emotional moment. With Ghost to help keep guard, the group stays holed up in the office while Edd leaves to ask the Wildlings for help. I’m anticipating a Thorne v. Tormund rematch on the horizon. Thorne holds a meeting with the Night’s Watch to explain his actions and try to justify them. Some agree with him and some don’t. The scene repeatedly cuts to Olly, who has aged quite a bit since last season. Apparently killing Jon has really changed him. It’s either that or it’s puberty. The actor is only 16 after all. Thorne visits the Jon loyalists and tells them if they surrender by that night they’ll be spared and Davos can leave. Davos requests mutton on top of his safe passage because why not?

We knew this episode was called ‘The Red Woman.” So what’s Melisandre up to? Well for the most part, nothing really. She’s depressed and questioning her faith. She saw Stannis’ victory in the flames, but now he’s dead. She also apparently saw Jon fighting at Winterfell, but he’s dead now too. Back in her chambers she takes off her clothes to stare at herself naked in the mirror. (Lest we forget we’re watching Game of Thrones. We needed some nudity.) But then as she removes her necklace she immediately ages to a point that seems to be beyond human life. She looks like the witch from Snow White combined with Kreacher from Harry Potter. But what does this mean for her going forward? It means she needs to put that necklace back on and go and resurrect Jon Snow! She doesn’t do that though. She just goes to bed and that’s it for this episode.

So we saw it again with our own eyes. Jon Snow is dead, but the way his body is being defended must mean that something more will happen regarding the Lord Commander this season. Of course it’s just wishful thinking at this point. Maybe it will be a Weekend at Bernie’s situation. But with this Game of Thrones recap we are officially in season six. This marks my fourth season recapping the show for Geek Insider. So I’ll be right here with you breaking down every traumatic turn throughout Westeros and Essos in the coming weeks. Enjoy the next six days as you continue debating Jon Snow’s future with your friends.

Questing Has Never Been Easier – Thanks to April’s Loot Crate