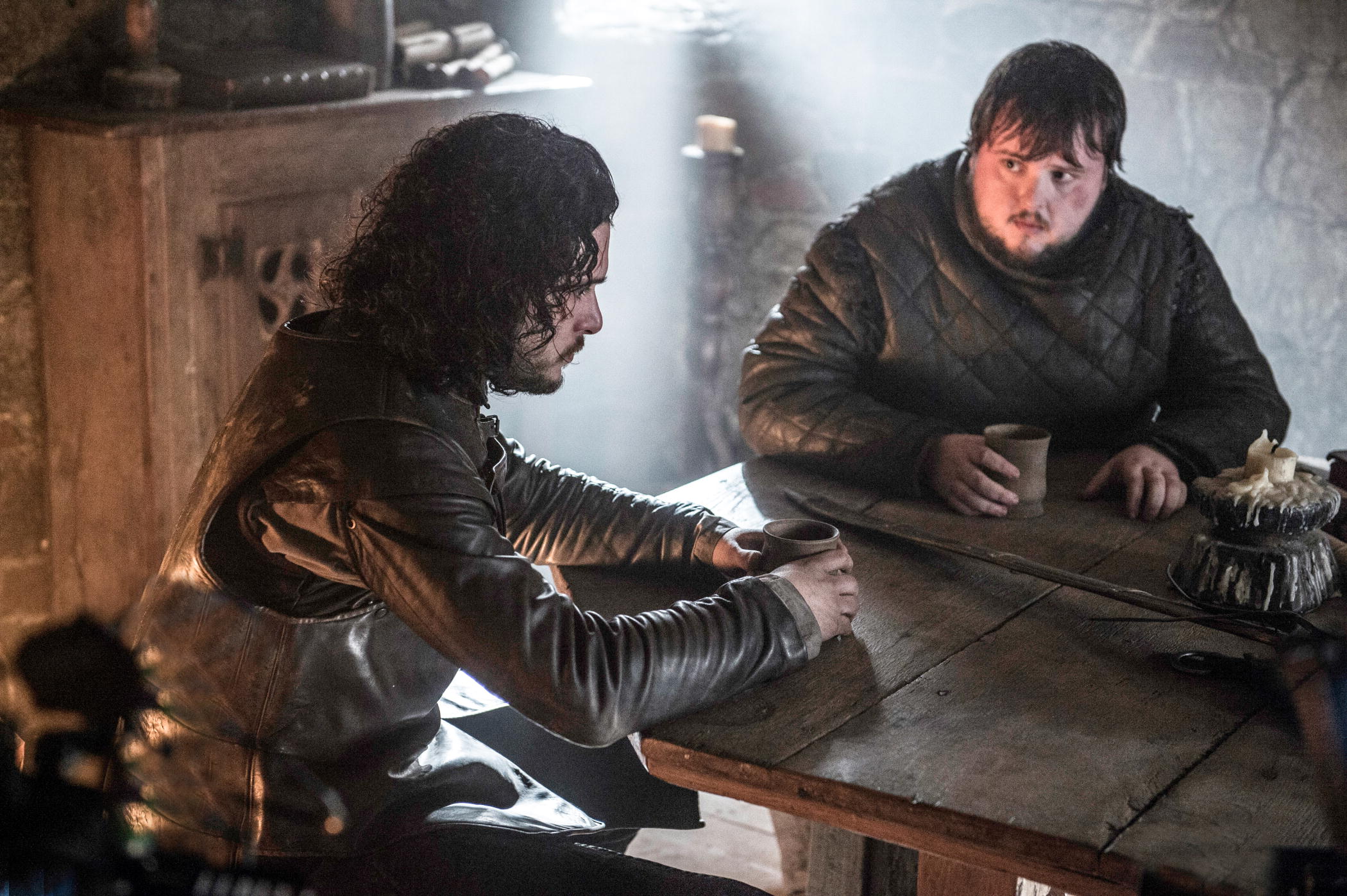 I guess we should have seen this coming. I guess the signs pointed in this direction all season long. But even as season five cut to black, I have a really hard time believing that this is the end for our friend Jon Snow. On a show where tons of characters die, I thought he was unkillable. Now as a result, I have a weight in my stomach for a fictional character. But that’s Game of Thrones for you. I’ll break down that horrible scene later in the post. But in the meantime, other stuff happened in this episode. Big stuff happened, in fact. But man, “Mother’s Mercy” is a bummer. Let’s break down the end on our Game of Thrones finale recap.

Stannis and the Terrible, Horrible, No Good, Very Bad Day

In the North, things have really gone south for Stannis. After sacrificing his daughter last week, the weather has improved a bit. So they can finally march on Winterfell. Was it really the sacrifice to the Lord of Light or would it have just gotten a bit warmer had Stannis waited a few more days? I think it’s the greenhouse gases emitted from all those burning bodies. I call it global warming at the stake. But the positivity from the thaw is short lived. Half of the army has deserted and taken all of the horses. Also Stannis’ wife, Selyse, has hanged herself after having witnessed her daughter’s death. Then Stannis finds out Melisandre has left also. Well Stannis, that’s a tough break, I guess you’re just going to have to turn back and…“WE MARCH!” Well, okay then. Stannis marches on Winterfell and is met by the Bolton army, which vastly outnumbers his. Stannis appears to be the last man standing on his side, but he’s wounded. I expected this to be when Ramsay shows up, but it’s not. Brienne, who has been camping nearby waiting for Sansa’s signal, finds Stannis wounded and defenseless. She asks him about murdering Renly. He admits to it and accepts his fate. Brienne swings Oathkeeper and we cut to the next scene. The audience is made to think Stannis is dead. But why not show it? It’s not like Game of Thrones shies away from such violence. If he is dead, that’s a four-season campaign down the drain. But we have a bunch more cliffhangers to discuss.

Across the way in Winterfell, Sansa is ready to make her move and attempt an escape. With the castle distracted by the battle, she manages to finally light a candle in the tower window signaling for help. But wouldn’t you know it? Brienne has just abandoned her post to seek out Stannis. So she doesn’t see the candle. Myranda finds Sansa and threatens to disfigure her lady parts because those are the kind of threats you give when you are a creepy sociopath. Sansa, cornered again, really has no way out of the situation. That is until Reek pushes Myranda off the ramparts to her death. Sansa and Reek then jump off the castle walls together to escape. How would they survive such a fall? I really have no idea. That’s another question for next season.

There is a short scene in Dorne as Jaime, Bronn, Myrcella, and Trystane set sail for King’s Landing. What a nice wrap up this storyline is getting. Ellaria even kisses Myrcella. What a nice gesture. On the boat, Jaime struggles to find the words when explaining to Myrcella that he is her father. But she interrupts, stating that she already knows the truth and she is happy about it. What a nice moment. But then her nose starts bleeding. Ellaria poisoned her with the kiss. So Jaime’s first act with his daughter knowing the truth is to hold her dying body. How very Game of Thrones.

The Blind Stabbing the Blind

In Braavos, Meryn Trant is whipping little girls in a brothel because the show really wants us to know how douchey he is. One of the girls won’t react to the pain, so he begins to focus on her. Well that is until the girl stabs him a bunch of times, gags him, and then peels her own face off to reveal that she is Arya. She gives a little talk explaining who she is and such. Then she cuts his throat. When returning the little girl’s face to the House of Black and White, Jaqen confronts her. He explains that Trant wasn’t meant to die. So they must offer another life as payment to the Many Faced God. He drinks poison and dies right in front of her. As Arya gets upset, Waif reveals that Jaqen was no one. She changes her face to Jaqen’s. So to sum things up, we have no idea who is who in this storyline. They are all faceless, or facially challenged if you prefer. Waif/Jaqen/faceless person then tells Arya that using the faces if you are not “no one” is a bad idea. Arya then goes blind just a few minutes after she stabbed Trant’s eyes out. In fact, this whole episode is filled with people who have trouble “seeing” in either a literal or figurative sense. 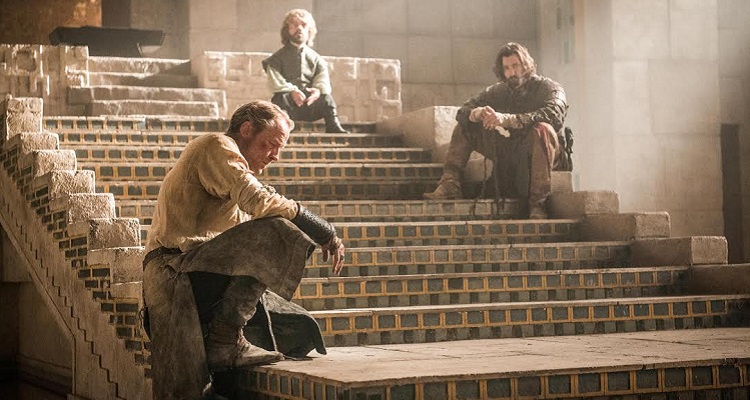 In Meereen, all the excitement from last week’s dragon escape seems to have evaporated. It turns out Drogon is not a reliable taxi and Daenerys is now missing. He is so getting a bad rating on Uber. Back in the great pyramid, Daario, Jorah, Tyrion, Grey Worm, and Missandei discuss what they should do. After some bickering where everyone questions each other’s credentials, Daario decides that he and Jorah will set out to find the Queen. Tyrion will stay back and rule the city with help from the others. As Daario and Jorah leave, your friendly neighborhood spider-eunuch, Varys turns up. We haven’t seen him since Tyrion was kidnapped a while ago. Now it will be exciting to see what Tyrion and Varys can do at the helm of Meereen. Somewhere else that definitely isn’t Meereen, Dany tries to get Drogon to fly her home. But he’s back to ignoring her. He’s a bit salty after getting impaled by a bunch of spears last week. As Dany heads off looking for food, a huge Dothraki horde turns up and surrounds her. Ugh.

Cersei has had enough in King’s Landing. She decides to confess to the High Sparrow, hoping it would mean she could see Tommen. She confesses to having an affair with Lancel, but stays mum on the whole Jaime situation. The High Sparrow says she must still stand trial, but as a reward she can return to the Red Keep. She also must weather a punishment to atone for the sin she confessed to. Her head gets shaved and she must walk through the crowded city streets naked. The scene is a long one as mobs of people mock her and throw things. There are also a bunch of folks who feel the need to whip out their own business in front of the Queen. The Faith Militant beats everyone who does that though. So only religiously sanctioned shame nudity is permitted on these streets! She eventually arrives at the Red Keep and succumbs to the tears she was fighting back the whole time. Qyburn comforts her and introduces her to the newest Kingsguard. The Franken-Mountain experiment apparently worked because the new guard is a massive dude with purple skin.

The Life and Death of Jon Snow

Now to the part I don’t really want to write. But first, during a meeting with Jon, Sam asks to go to Oldtown to become a maester. Sure, he wants to help out the Night’s Watch, but he also wants to get Gilly and baby Sam far away from the wildling-hating crows. Jon reluctantly agrees. Davos arrives with Stannis’ request for supplies and men. Then Melisandre turns up. She’s all depressed, assuming Stannis’ defeat. Davos asks about Shireen, whom we know for a fact is dead.

Later Olly comes to Jon claiming they have a wildling who has seen Jon’s uncle, Benjen Stark. But when Jon gets outside, he finds a sign that reads “traitor.” Alliser Thorne and a handful of others stab Jon while uttering, “for the watch.” Olly delivers the final blow. We zoom in on Jon, lying in the snow that slowly turns red from his blood. Jon’s difficult decision to save the wildling’s despite the Night’s Watch opposition has led to his downfall. I mentioned earlier that I don’t know about Stannis’ death because they don’t show the final blow. Well they do show it in Jon’s situation. We watch him die. But I just don’t think it’s so definite. We have seen the Lord of Light resurrect Beric Dondarrion, and a red priestess (Melisandre) happens to have just showed up at Castle Black. The whole thing seems pretty final, but I just don’t know. Over the next year, we’ll be reading a lot of theories. But the fact is that Jon Snow, as we stand right now, is dead. He was on my short list of unkillable characters, but I guess…I know nothing, Jon Snow.

It’s hard to think back on all of season five when the finale was such a game changer. But even through the difficult parts, the whole landscape of Westeros and Essos has changed this year. With all the variations from the books, some of the fanbase lost patience with the show. But now we are in completely uncharted waters. Book and TV fans can theorize together. Obviously “winter is coming” for our characters. But if it’s any more brutal than this, I’m going to need a warmer jacket. I appreciate you taking the time to read these recaps. The end of a Game of Thrones season is a sad time for us fans. But I think I need a break to enjoy some cheerier television like…literally any other show. Until next season, “valar morghulis.” “All men must die.” But please not Jon Snow!