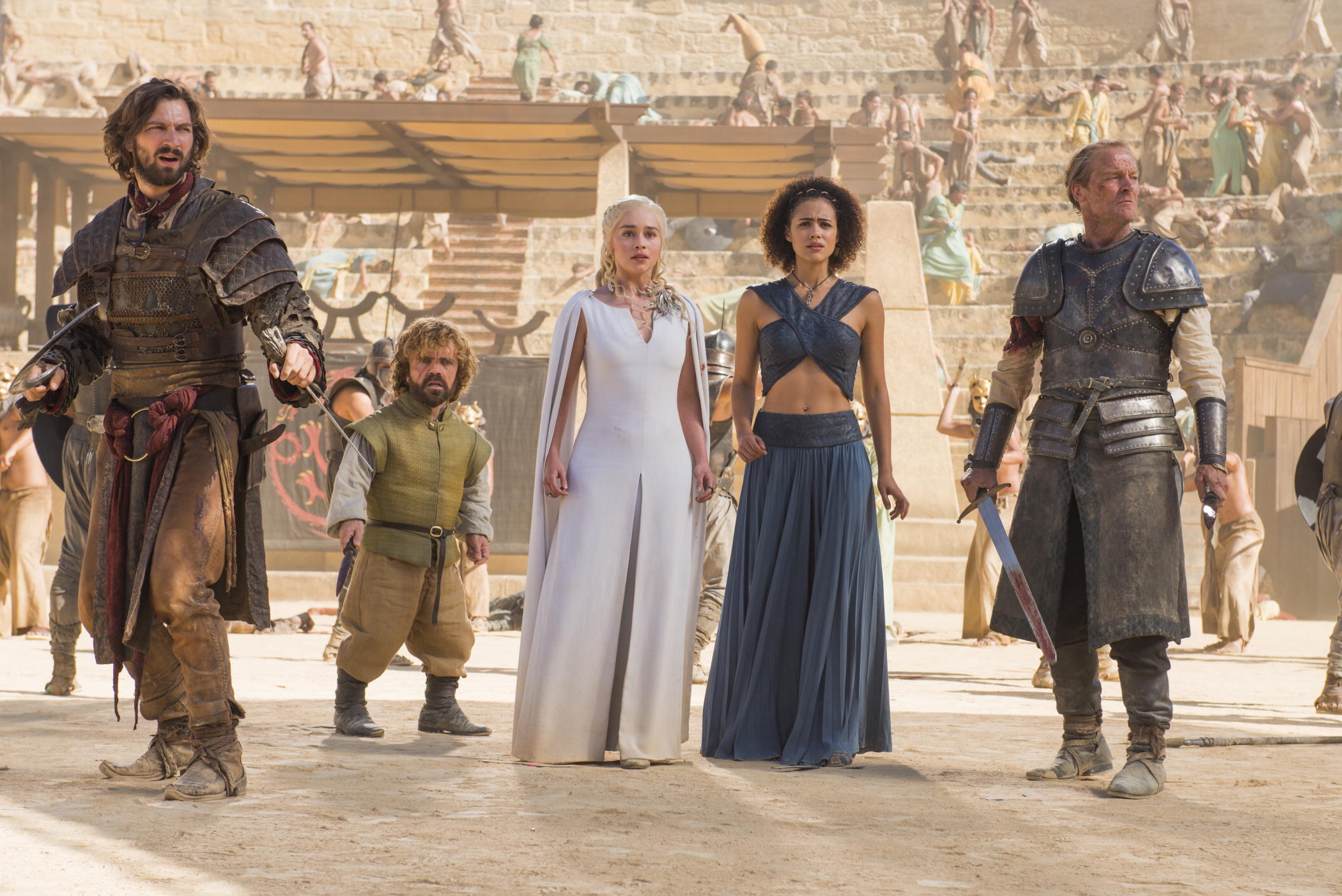 Well, we saw a big battle against the White Walkers last week. So it was only natural to expect a bit of a let down with this episode. But, as you know, Game of Thrones pulls out all the stops with the penultimate episode every season. This one was no exception. With a title like “The Dance of Dragons,” I had high expectations. That doesn’t mean everything was all fun and games in Westeros and Essos though. It is Game of Thrones after all. Here’s our recap.

In Braavos, Arya continues her mission disguised as an oyster merchant. Her task is to poison the gambler, or Thin Man, that we met last episode. But as she approaches him to finish her task, a familiar face distracts her. Mace Tyrell is in town to talk to the Iron Bank of Braavos. But more importantly Ser Meryn Trant, one of the names on Arya’s list, accompanies him. Once Arya sees Trant she ignores the Thin Man and follows her new target around. Eventually that night he settles in at a brothel. We already hate this guy, but we’re given even more reason to here. He keeps asking for younger and younger girls until a child is brought out. He approves. Arya leaves him alive for now. When she returns to the House of Black and White she tells Jaqen that the Thin Man wasn’t hungry today. It seems like Jaqen doesn’t believe her, but he doesn’t say anything. Maybe next week Arya will serve up some oysters, clams and cockles with a side of DEATH!

There’s a pretty short scene up at Castle Black this week. Jon returns to the Wall with Edd, Tormund, and all the wildlings. They look pretty beat up, like they just got into a fight with thousands of zombies or something. Alliser Thorne, whose main job these days is to frown at Jon Snow, hesitates before giving the command to open the gate for them. Jon tells Sam that he thinks the mission was a failure since they left behind too many people and they are all dead now. Sam tries to be optimistic by pointing out that all of these wildlings are alive because of him. Most of the Night’s Watch looks on angrily as the wildlings march through to their new lands south of the Wall.

Dorne to Be Wild…ly Redundant

In the land of unnecessary storylines, or Dorne as it’s also called, Jaime meets with Prince Doran. Jaime explains the threat sent to Cersei earlier in the season as the reason why he has come to rescue Myrcella. Ellaria Sand, also at this meeting, is obviously behind the threat. So Doran apologizes and hatches a plan. Jaime can bring Myrcella back to King’s Landing, but Trystane will go with her. He will also serve on the Small Council like Oberyn did before he died. Bronn is also set free, but Areo Hotah gets to hit him as payback for when Bronn punched Trystane. Later, Doran insists that Ellaria pledge her loyalty to him. She agrees and then meets with Jaime and kind of apologizes. She admits Oberyn’s death was not Jaime or Myrcella’s fault. We have a term to describe this situation. No duh!

In the North, Stannis is currently losing his noodle. Ramsay and his small group of men sneak into the Baratheon camp and strategically burn all their important stuff. Siege weapons, food, horses and other supplies are some of the main casualties. Stannis orders Davos to go to Castle Black and get more supplies. Before he leaves for the Wall, Davos stops by to give Shireen a wooden stag he carved for her as a gift for teaching him to read. She tells him the story of “The Dance of Dragons” during the time of Targaryens. Later, Stannis also hears this story from his daughter. She asks if there is anything she can do to help him. “Well yes actually, dearest daughter. Would you mind if we burnt you alive? You’d really be doing me a solid.” And that’s what happens! As Stannis and his wife look on, Shireen screams for them to save her. Apparently this will please the Lord of Light. Davos is not going to be happy when he gets back. It’s a very tough scene to watch. But in the upcoming battle between a daughter burner (Stannis) and a sausage butcher (Ramsay Bolton), who is it that we are supposed to root for? It looks like we have until next week to make that choice.

Now we get to the main event, the Great Games of Meereen. A lot of stuff happens here. Daenerys sits with her whole entourage by her side in the arena. Tyrion is one of them now, which is cool. During the first fight in the pit, Daario’s manliness easily defeats Hizdahr’s in a conversation about their fighting histories. Then in the second battle, the always clingy, Ser Jorah is there pledging himself to Dany again. The Queen responds with her usual expression when she sees Jorah. It’s somewhere between “I’m going to barf” and the SNL Whaturyoudoinghere!? After a difficult battle royale, Jorah is victorious. He then suddenly wings a spear at the stage killing a Sons of the Harpy guy who had snuck up behind Daenerys. Come on Daario, what are they paying you for? Looking around, a bunch of the spectators have put on Harpy masks and start killing everyone around them. Dany and co. allow Jorah back into their fold, as they are drastically outnumbered. Tyrion saves Missandei. Hizdahr, who always seemed a bit shady when it came to the Sons of the Harpy is stabbed and killed. It looks like it’s only a matter of time before the group is overrun as the unsullied continue to get picked off by the superior numbers. That is, until we hear the shriek of a dragon. Drogon appears, apparently back from his sabbatical. He begins roasting Harpys, he bites some apart and stomps on others. We get the full view of what a dragon can do in battle. There are a few moments as the dragon gets hit with a bunch of spears, I wondered if he was going to survive the ordeal, but he does. Dany climbs on his back and flies from the stadium as everyone looks on in amazement. The only thing that was missing was Dany dropping the mic on her way out.

So it would seem “The Dance of Dragons” is essentially a dragon biting people’s heads off and burning them alive. This episode had a lot highs and lows to it. The final Meereen sequence will be remembered for how epic it is. The Shireen death will be remembered for its cruelty. But death is a huge part of Game of Thrones. We saw a battle in the ice last episode and this week we saw the brutality of a battle by fire. I guess this season we are seeing where George RR Martin got his “A Song of Ice and Fire” series title. One more episode left! See you next week.