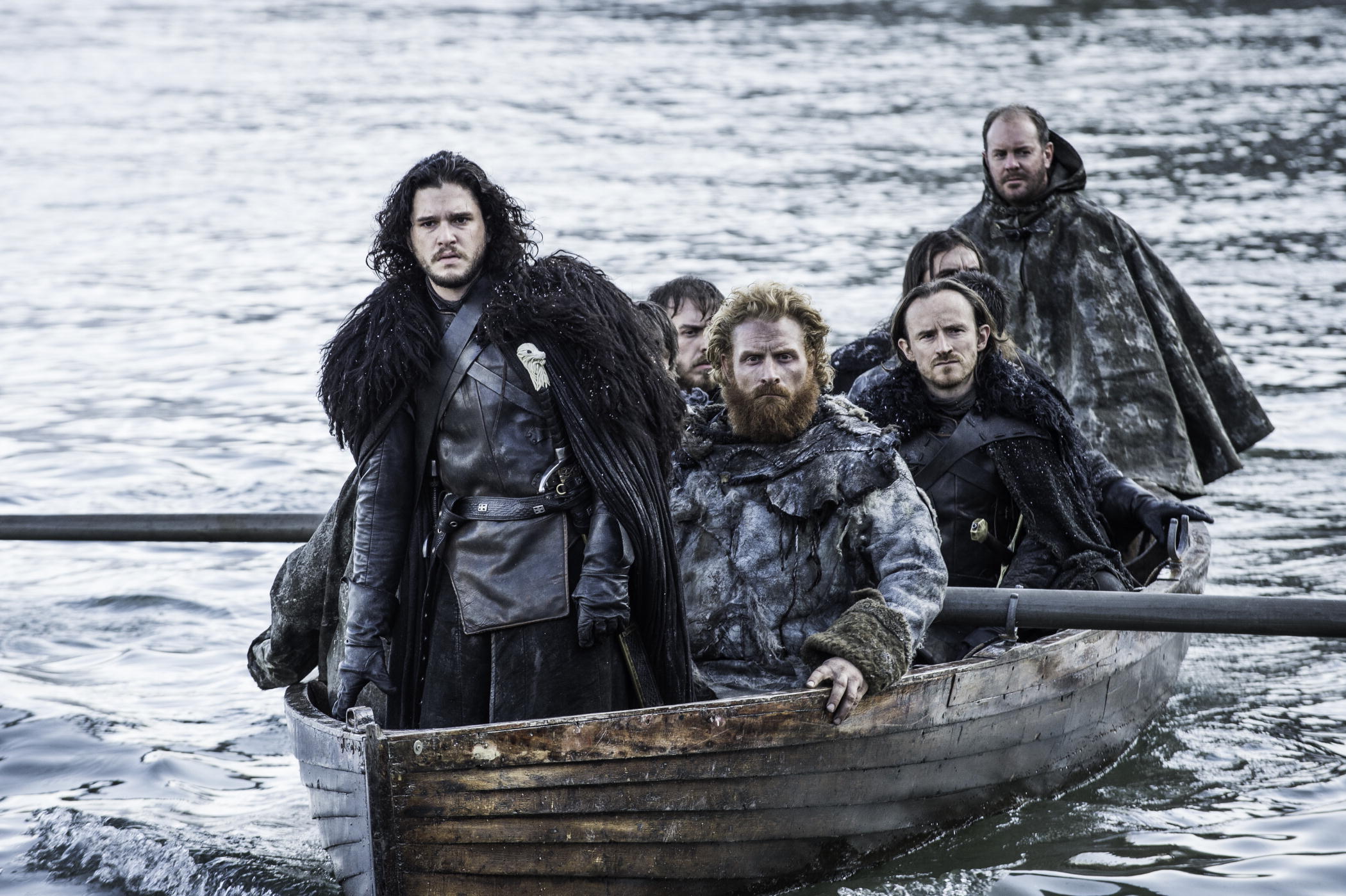 Season five, the year Game of Thrones the show took a sharp turn away from the books. It’s the year the Internet went nuts with the plot turns of Mance Rayder, Ser Barristan, Ser Jorah, and Sansa. But now it’s also the year that contains an epic battle with the White Walkers. Oh and did we mention Daenerys and Tyrion are buddies now? These are moments that felt like they might never come with the ever-building style of the show. Here’s our recap of Game of Thrones Season 5, Episode 8, “Hardhome.”

Arya’s Oysters: Get Them Before She Gets You

We’ll start in Braavos where Arya is on her first assignment playing the game of faces. She describes her story as an oyster seller to Jaqen before going out into the city. Taking the route Jaqen tells her to, she comes across a guy running a gambling operation where he makes bets on whether or not ships will safely reach their destinations. Arya sells him some oysters. Back at the HBW, that’s what us regulars call the House of Black and White, Jaqen tells Arya the details of this guy’s operation. She is to learn everything she can about the gambler and then poison him. So this leaves some unanswered questions for us viewers. Namely, how does Arya come to possess the best oysters in the city to sell to this potential target? Was there some oyster-catching seminar that didn’t make the episode? Ugh this show is so unrealistic. Stay tuned for the part where we recap the woman with pet dragons and the zombie-making abominable snowmen, which are much more credible storylines.

We’re in a bit of a holding pattern in Winterfell. Reek brings Sansa some food. Naturally she’s not pleased after he tattletaled on her escape aspirations last week. The former Theon tells her that there is no escape from Ramsay. Apparently falling victim to the sausage butcher of House Bolton really raises your opinion of him. (Do you like that nickname? I made it up myself.) Well anyway, the conversation turns to Bran and Rickon. Eventually Reek admits to Sansa that he did not kill them. The charred bodies from a few seasons ago were two farm boys. We already knew that, but Sansa did not. Elsewhere in the castle, Roose Bolton discusses Stannis’ siege with his advisors. He thinks they should wait out the invaders in the castle. The effects of the winter will likely win the battle for them. But Ramsay spits in the face of logic and sanity. He wants to attack Stannis with a small group of men. 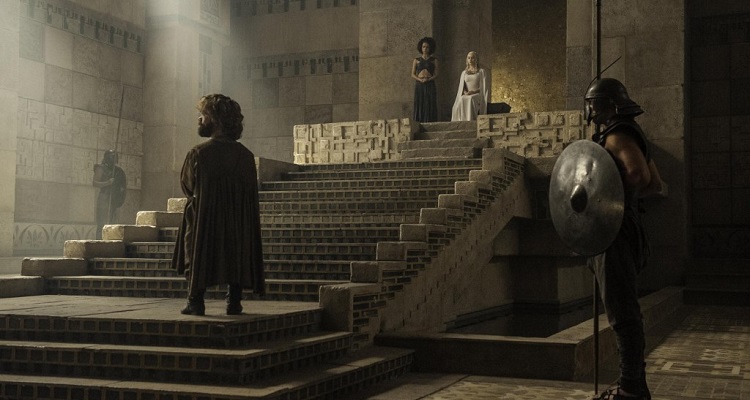 The Queen of Meereen: Now Hiring

Most of King’s Landing is in prison currently. Well, most of the people we see at least. Cersei gets visited by the very creepy, Septa Unella in her cell. The queen is offered water in return for her confession. Naturally she doesn’t accept, which is probably a good move since a confession would warrant a worse punishment than a dry mouth. Qyburn visits Cersei and gives her an update about what’s going on outside the cellblock. Tommen is all whiny and sad apparently, which is no surprise. Grand Maester Pycelle is now running the Small Council. He has appointed Cersei’s uncle, Kevan Lannister as Hand of the King. Cersei isn’t happy about this, but she has more pressing matters to deal with, like the charges against her. There is a pretty solid case against her on the incest claim, but then there is the matter of the murder of King Robert Baratheon. At this point Cersei’s only hope is Qyburn and whatever creepy experiments he has brewing in his lab.

In Meereen, our first full conversation between Daenerys and Tyrion does not disappoint. First we get an informal job interview. But boy does Dany hire him quickly. When looking through her employee history, she does seem to employ former enemies rather quickly. There was Ser Barristan, Daario, and now Tyrion. The former Hand of the King uses those experiences in the capital to demonstrate his knowledge of Westerosi politics, which will help the Queen in her conquests. Ser Jorah’s luck is not as good. Dany wants to kill him. Tyrion advises her to spare his life because of his loyalty, but not keep him around. So Jorah is exiled from the city again. That’s two seasons in a row in episode 8 that Jorah is exiled from Meereen. What a frustrating cycle it has been for him. On his way out, he returns to Yezzan zo Qaggaz and asks to compete in the fighting pits again. Tyrion and Daenerys continue to bond over a glass…or a bottle of wine. They discuss her eventual return to Westeros. Tyrion says that she will need the support of some of the great houses and the common people to rule. But Daenerys says she’s going to crush all the great houses. Yeah we’ll see, Dany. You’re going to need your dragons to listen to you first.

So now let’s see what the Night’s Watch is up to. Sam the slayer, who is both a slayer of enemies and the ladies, is recovering from his beat down wounds with Gilly. Olly brings Sam some food and asks to speak to him in private. He asks Sam about Jon’s controversial choice to help the wildlings. Remember, the wildlings killed Olly’s parents. Sam tells him that Jon had to make the choice he thought was right. Also they need the wildlings to defeat the White Walkers. Olly’s storyline is either moving in the direction of forgiveness or the direction of kill the wildlings and screw up the plan. It’s a classic Game of Thrones toss up.

About half of the episode was devoted to Jon and Tormund arriving at Hardhome, where the wildlings currently reside. The Lord of Bones immediately questions Tormund for becoming allies with Jon. Tormund, apparently short on patience, goes off and kills him right there. At a meeting with all the elders, Jon gives his spiel about putting their differences aside in order to survive and possibly defeat the White Walkers. The wildlings will get lands below the Wall. He shares the dragonglass with them and it seems the group is leaning in his favor. That is until someone asks about Mance Rayder. Jon blurts out that he shot him in the heart with an arrow. Tormund calms everyone down by explaining that it was out of mercy. Jon really should have explained that better. So a big chunk of the wildlings agree to the plan. The Thenns don’t, but that’s okay we didn’t really want them anyway. 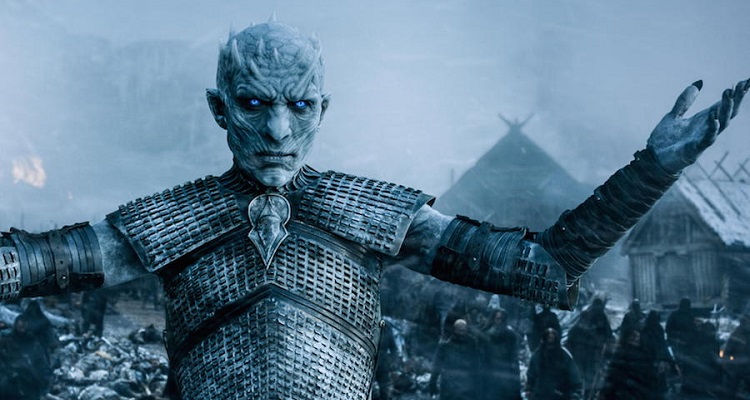 So the wildlings start loading into boats to make their way to Wall. But the situation turns sour very quickly when an army of wights attacks the camp. We get an intense battle sequence with skulls getting smashed, arrows through heads, guts ripped out of bodies and other blood and gore. Jon and Tormund see that the White Walkers are watching from the mountaintop. Jon goes to collect the dragonglass from one of the tents. Inside, he and a Thenn named Loboda encounter a White Walker. Loboda is quickly killed. Jon proceeds to get whooped on for a few minutes. But the Walker lets his guard down for a moment when Jon’s Valyrian steel sword doesn’t break when struck. So that gives Jon the opportunity to kill the White Walker. If you’re keeping score at home, that’s the very rare dragonglass and ultra rare Valyrian steel that can kill White Walkers. As Jon and his surviving allies flee in a boat, a White Walker with a Darth Maul haircut brings all the dead wildlings back to life in front of them. Luckily they don’t swim after them because our heroes are inexplicably rowing very slowly.

The story at Hardhome introduced some interesting new characters, but almost all of them were immediately killed off during the battle. So hopefully you didn’t get too attached to Loboda or Karsi, a female leader that had an interesting dynamic with Jon. Naturally she got killed by a whole bunch of zombie children. But either way, this episode of Game of Thrones was an incredibly exciting chapter with our biggest look yet at the ultimate villains of the series, the White Walkers. I hate to be the bearer of bad news, but there are only two episodes left this season.

Who was the hooded boatman?