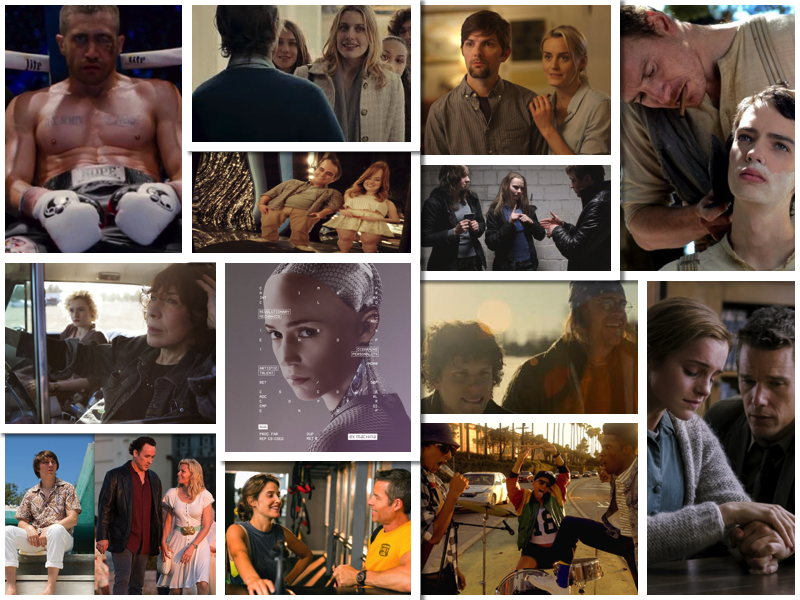 Avengers have assembled, Max has taken us down Fury Road, California is falling into a great big hole in the earth and there are a buncha mutant dinosaurs on the horizon. Yep, the blockbuster season is firmly upon us. As much fun as the summer movie season is, there comes a time when you’re just a little tired of things blowing up. That doesn’t mean you need to stay away from the theater, though. “Counter-programming” season is also in full effect and Hollywood has an intriguing slate of films set for release this summer that should more than keep that brain of yours from going numb. Here are 13 anti-summer movies whose combined budgets fall short of Age of Ultron…but may just save your summer. 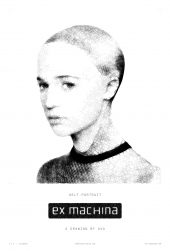 Ex-Machina (In Theaters) – After pushing The Avengers to the limit this summer, the birth of Artificial Intelligence once again takes center stage in Ex-Machina. This time it’s in the form of beautiful and soulful machine, Ava (Alicia Vikander). Oscar Isaac is electric as genius creator, Nathan and Domhnall Gleeson shines as underling-maybe-savior, Caleb in Alex Garland’s moody/masterful tale of hubris and humanity. Equal parts hard sci-fi and deep character study, Ex-Machina may be the best sci-fi movie of the year (and should make some all-time lists). Heads up, though, this one has been in theaters a few weeks already, so make sure you catch it soon. {Trailer}

Results (May 29) – Guy Pearce and Cobie Smulders have both played integral roles in the Marvel Cinematic Universe in recent years. Here, the pair play personal trainers with very different approaches to life. When Kevin Corrigan‘s uber-wealthy slacker enters the gym, their neatly structured existences are quickly upended. Results was written & directed by occasionally brilliant, but often confounding “mumblecore” autuer, Andrew Bujalski. Bujalski tests new waters by adding something resembling a plot to his film and the result (haha) is quite satisfying. Pearce, Smulders, and Corrigan breathe beautiful life into a near-flawless script and Bujalski is brave enough to present his characters at their best and their worst in one of this summer’s most rewarding films. {Trailer}

Love & Mercy (June 5) – Paul Dano and John Cusack both play musical-icon/Beach Boy Brian Wilson at distinctly different stages of life in Love & Mercy. Dano plays 60’s Wilson – young, tortured, and trying to craft the greatest album ever made. Cusak finds Wilson in the 80’s, broken and under the 24 hour care of radical/questionable Dr. Eugene Landy (played by the luminous Paul Giamatti). Life changes for Cusak’s Wilson when he meets Melinda Ledbetter (Elizabeth Banks), who may be the woman to help the Beach Boy find himself. Utilizing a boldly non-linear narrative style and focusing on the dazzling performances of his two leads, Director Bill Pohlad shakes off the usual biopic tropes and crafts a film as unique as its subject. {Trailer}

The Tribe (June 17) – Great films take risks, and no film this year will take more than Miroslav Slaboshpitsky’s devastating The Tribe. The film focuses on a group of deaf students at a specialized boarding school. When a new student shows up, he quickly hooks up with a wild clique that calls themselves The Tribe. Life gets complicated when he falls in love with a fellow member and starts breaking the group’s unwritten rules. Sounds interesting enough, yeah? Well, here’s where things get really interesting. Slaboshpitsky filled his cast with deaf actors. No use of vocal language was permitted in the film and the actors communicate strictly with sign-language…and there’s no subtitles. The result is a challenging film that leaves you in awe of its scope and raw emotion. Keep an eye out for this one at your local art-house. {Trailer}

The Overnight (June 19) – Alex (Adam Scott), Emily (Taylor Schilling), and their son RJ have just moved to Los Angeles. They know no one in the city, and a chance meeting with Kurt (Jason Schwartzman) and Charlotte (Judith Godrèche), whose son Max hits it off with RJ, looks like just the social opening they need. Their family playdate turns into a sleep over and once the kids are put to bed things get increasingly weird and seriously funny. Writer/Director Patrick Brice paints a fascinating portrait of modern life in this darkly hilarious ode to self-indulgence and self-discovery. Produced by Mark Duplass, The Overnight was hailed the funniest film at this year’s Sundance Film Festival. This one should be worth the price of admission just to watch Scott and Schwartzman trade lines. At a taut 80 minutes, it won’t cost you that much time either. {Trailer}

Dope (June 19) – Here’s another Sundance winner that should get a little bit of love even in the crowded summer lineup. Malcolm (Shameik Moore in a star-making turn) is kind of a geek, which makes growing up in the tough neighborhood of Inglewood, CA all the more difficult. When Malcolm and his friends (Tony Revolori and Kiersey Clemmons) attend an underground birthday party, the crew find themselves entangled in the world of drug dealers and other unsavory characters. Writer/Director Rick Famuyiwa’s heart-on-its-sleeve film has been described as, “a coming of age dramedy for the post-hip hop generation.” With quirky, heartbreakingly funny performances and just the right amount of nostalgia, Dope promises to hit your heartstrings as much as it does your funny bone. {Trailer}

Irrational Man (July 17) – Woody Allen continues to release films at an alarmingly efficient rate (roughly 1 film a year since he started back in the 60’s). This summer, Allen will look to rebound from last year’s tepid Magic in The Moonlight with Irrational Man. This film tells the story of a depressed professor of philosophy (Joaquin Phoenix) who rediscovers his will to live and his desire to examine life’s existential questions after he falls in love with a charming young student (Emma Stone). Irrational Man looks to be vintage Woody Allen with razor-sharp wit, strong female characters (including Parker Posey who had somehow never worked with Allen before), and an affably likable “hero.” This one is a sure-fire summer blockbuster diversion. {Trailer}

Southpaw (July 24) – Jake Gyllenhaal continues his recent career resurgence as Billy Hope, a heavyweight boxer fighting his way to the top as his life falls apart around him. After a violent showdown outside of the ring with a cocky rival boxer, he finds his life in utter shambles. Hope must dig deep inside himself to claim his place as champion inside of the ring and out. Directed by Antoine Fuqua and written by Sons of Anarchy’s Kurt Sutter, Southpaw could be that rare film that satisfies on an emotional level as much as with its intense boxing action. At the center of the film is a ferocious performance from Gyllenhaal, who put on 15lbs. of muscle for the role. The physical performance is startling, but it’s the deeply felt emotions of Southpaw that are sure to stick with you long after the credits roll. {Trailer}

The End of the Tour (July 31) – For the literary set, look no further than James Ponsoldt’s The End of the Tour, which recounts a series of conversations between Rolling Stone journalist David Lipsky and Infinite Jest scribe David Foster Wallace. Working well as a road movie and talky character study, The End of the Tour succeeds largely on the efforts of its actors. Jesse Eisenberg plays Lipsky with his usual whip-smart cockiness, but the revelation in this film is Jason Segel as the hyper-intellegent/curmudgeonly Wallace. We knew Segel could make us laugh, but nothing can prepare you for the brash ball of neurotic fire he brings as Wallace. The End of the Tour is one of those films that relies heavily on dialogue, but the writing is so crisp and the performances so sharp that the words become action. Turns out verbal explosions can be way more fun than CGI. {Trailer}

Mistress America (August 14) – Speaking of talky films, Noah Baumbach is back for his second release of the summer after his disappointingly plot-driven While We’re Young. Mistress America sees the filmmaker reuniting a third time with his current muse Greta Gerwig for the story of a lonely NY college student whose life is flipped on its head by her fervid, soon-to-be stepsister. Lola Kirke plays the student and Gerwig bubbles her way through the film as the impetuous Brooke. Mistress America is a story about chasing your dreams and finding your family in the most unexpected places and Baumbach doesn’t let a plot get in the way of a good conversation. Wisely he steps back and lets his actors do all the heavy-lifting in this charming little slice-of-life. {no trailer yet, but here’s an interesting Interview from a couple of years ago}

Grandma (August 21) – Lily Tomlin. Lily Tomlin…Lily f***ing Tomlin! Do I need to say more?  Ugh…all right then. Tomlin turns in a career-defining performance as the titular Grandma, Elle Reid. Reid’s misanthropic existence is undone when her 18 year old granddaughter, Sage (Julia Garner), turns up on her doorstep in desperate need of help. The pair head out on a day-long journey (in a cherry 1955 Dodge Royal that actually belongs to Tomlin) to collect enough money to fix Sage’s problem. In the process Elle is forced to take a long, hard look at her past and present existence while Sage worries about her questionable future. Returning to his character-driven roots after a decade of big-budget dreck, writer/director Chris Weitz keeps his story simple and his camera firmly on Tomlin as Grandma weaves its way deep into your heart, your mind, and your wise-cracking soul.  {Trailer}

Regression (August 28) – Emma Watson continues her quest to prove that she’s all grown up and eager to leave Hermoine behind in Regression. Alejandro Amenabar’s eerie thriller tells the story of a young woman abused by her father and the father (David Dencik) who has no memory of the crime. Ethan Hawke plays a do-gooding detective with questionable motives and David Thewlis (Watson’s Harry Potter co-star) steps in as a psychologist using the titular therapy in the hopes of finding out the truth. Their search gets more complicated when a frenzied media reports that a Satanic cult may somehow be involved. Amenabar keeps the questions coming, the atmosphere thick, and the action character-focused in Regression, making it one of summer’s most engrossing dramas. {Trailer}

There you a have it, kids. There’s something for everyone at the theater this summer, so do yourself a favor and go see a movie. And when you’re tired of things exploding, go see one of these.