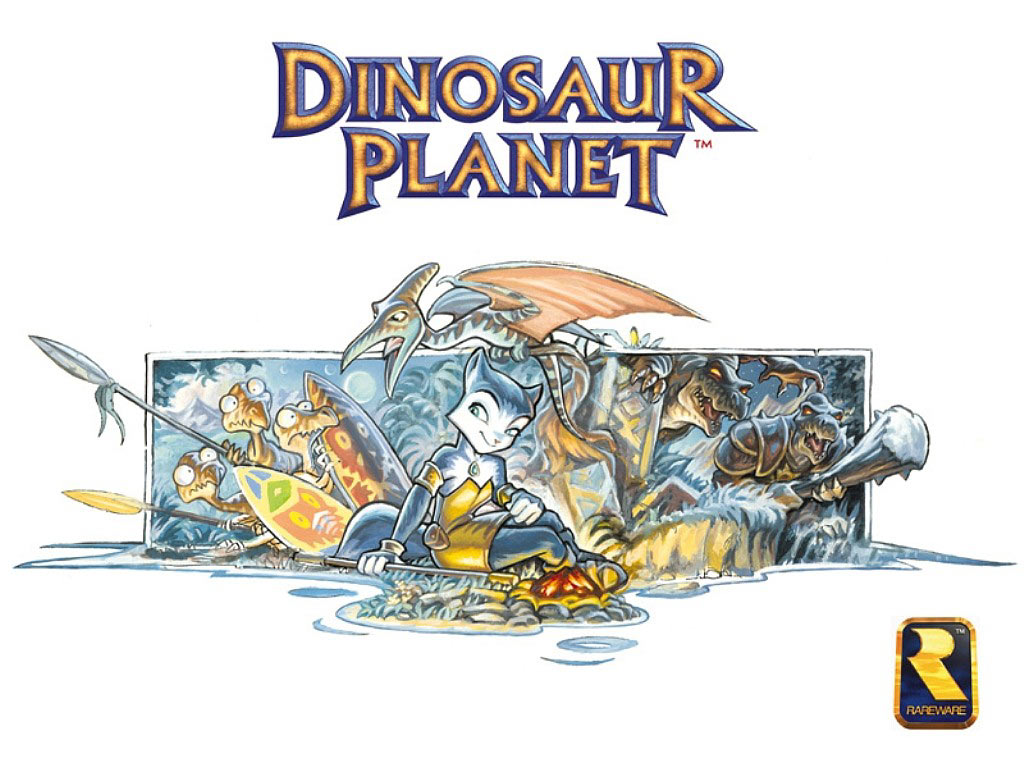 Star Fox Adventures was Rare’s last and only game released for the Nintendo Gamecube in North America on September 23, 2002, before they switched over to Microsoft’s Xbox. Fans complained that the game didn’t feel like a Star Fox game, but played more like Zelda, and that’s because Star Fox Adventures actually started out as a Nintendo 64 game called Dinosaur Planet.

Dinosaur Planet was in development around the year 1999 or 2000. It would serve as the ultimate experience for N64, since the game system would have to match the power of the Play Station X (not Play Station 2). The problem the N64 had was the lack of memory and inability to create voice acting, since they chose to stick to the small megabyte sized game cartridge. However, Nintendo was able to create a 512 megabyte cartridge late in the Nintendo 64’s lifespan. These new cartridges would be expensive, meaning that Nintendo was going to have to take a risk selling these bad boys. Nintendo decided that no company would be better suited for the job then Rare.

One of Rare’s staff members, Phil Tossell, said to Retro Gamer about Dinosaur Planet, “Actually, it was supposed to be a hybrid of Diddy Kong Racing and an adventure game. Every level would have some kind of track in it, and a race as part of the story. It took a while to settle down.” According to the scraps leftover from Dinosaur Planet, there seems to be hardly any racing in the game. Perhaps the race tracks for each level were dropped very early in development. Two main characters were to be playable, a boy fox named Sabre who was the son of a great wizard name Randorn, and a blue she-cat named Krystal, who was adopted by Randorn.

Each character wielded a different weapon, Sabre: a sword, Krystal: a staff, and each had a different side-kick. Sabre would have the small triceratops prince named Tricky and Krystal would have a pterodactyl princess named Kyte. The story would have started off with Sabre and Krystal falling through a worm-hole, where both characters are sent on a mission from Randorn to rescue Tricky and Kyte from the General Scales, and bring them to Warlock Mountain. For gamers to switch between the characters, a Swapstone was to be used. The game was being built on the Legend of Zelda: Ocarina of Time’s game engine, which explains why Star Fox Adventures feels like a Zelda game to some fans. There was even some speculation that Dinosaur Planet would follow a time traveling device like in The Ocarina of Time, based on two concept art pieces showing grown-up versions of Sabre and Krystal.

The fact that Dinosaur Planet was developed so late in the Nintendo 64’s lifespan caused the game to be moved to the next generation, the Nintendo Gamecube. Another force that made the game change was when Shigeru Miyamoto joined the project. Sabre reminded Miyamoto of Fox McCloud, and he suggested that the game become a Star Fox game.

Which might have been worst thing that Shigeru Miyamoto could have done. I can forgive the teaming up with Philips CD-i, or the educational Mario games, but Miyamoto ultimately drove a stake right though a potentially successful gaming franchise. Then again, it’s hard to say what would have become of the game since it was not released as it was originally intended to be. According to Phil Tossell, the Rare staff had no problem changing the game to Miyamoto’s demands, “It seemed like a no-brainer. They’re offering this great character from this great franchise! I was attached to Dinosaur Planet but I love the original Star Fox. Our only concerns were how we could fit it into this game we have.”

So alternations were made to the existing storyline, including cutting out multiple scenes that wouldn’t fit into the new storyline. Sabre was removed, obviously replaced with Fox McCloud, and Krystal would became the lovely blue vixen that we know and love today.