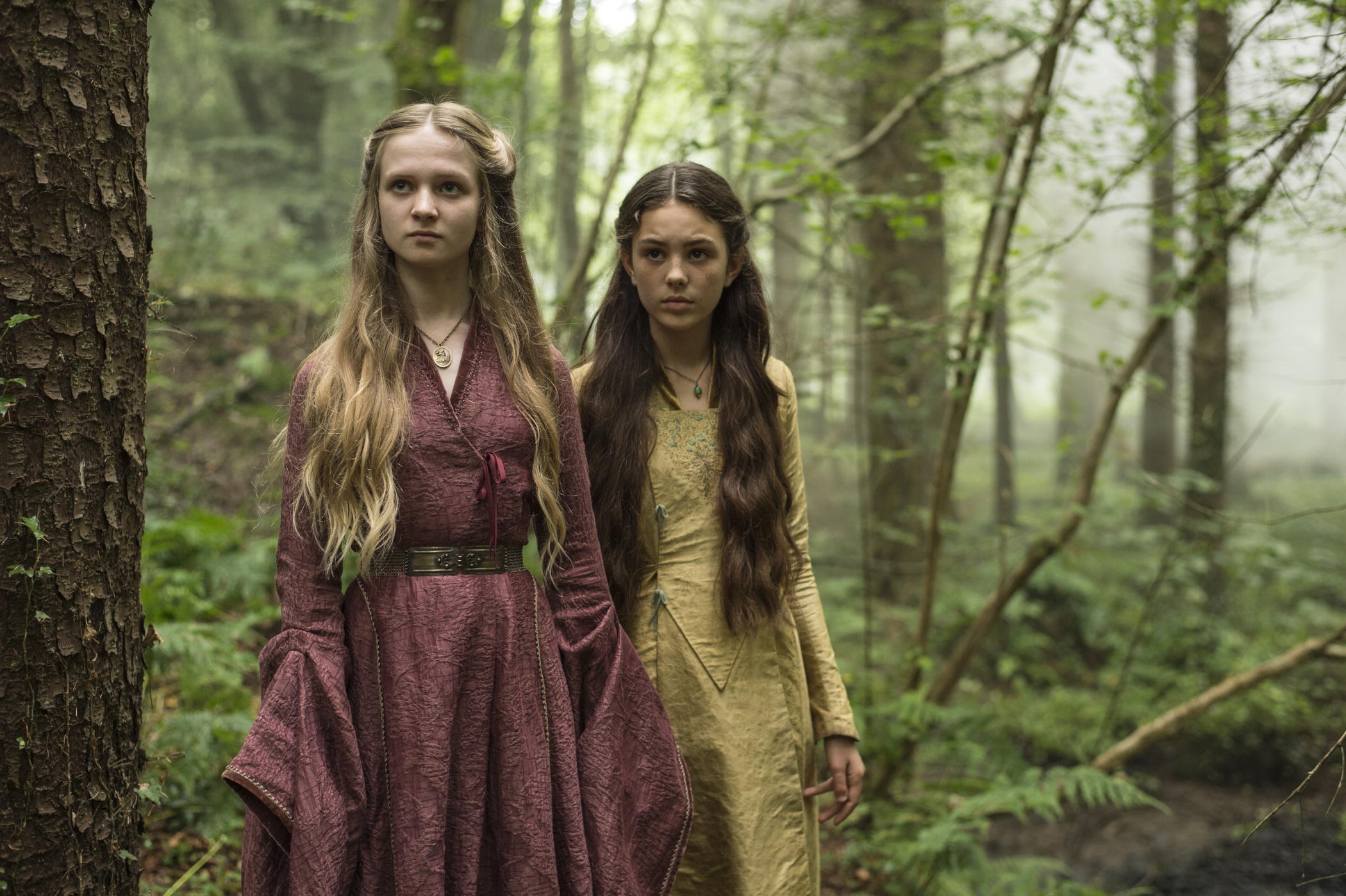 With only ten episodes a year, when the Game of Thrones seasons end I always have this feeling that the wait for new episodes will be absolutely unbearable. Well congratulations guys, we’ve made it! We’re back! But the premiere episode was a master class in getting millions of people to watch characters tell us things we already know and convince us we’re pumped about it. But don’t misconstrue that as disappointment. I would watch Tyrion and Varys read from the dictionary if I had to. Let’s break down the Game of Thrones S5 E1 premiere, “The Wars to Come.”

Obviously we all started by dancing around our various living rooms like idiots during the show’s opening theme. (Don’t lie, I know you were.) Also, the Bolton sigil on top of Winterfell? Aw, hell no! But once the show started we were treated to our first flashback in the series. Was it a thrilling scene from Robert’s Rebellion? No, it was a young Cersei doing her best Regina George from Mean Girls impression. She and a friend are wandering through the woods and meet up with Maggy, a grungy witch, who can tell the future. Cersei orders Maggy to reveal hers. Well guess what, most of that future is stuff we already know. Cersei will be queen, but not father any of the king’s many children. She will have a few children that will wear gold crowns, but then die in gold shrouds. (But sweet, innocent Tommen and Myrcella!) Then a younger, more beautiful queen will cast her down. (You go Margaery!) Uh oh, we have a prophecy folks. It would seem this weighs on Cersei’s mind as we cut from the flashback to modern day Cersei like she was remembering it. Is her trying to avoid the prophecy leading it to come true?

A large crowd of lords and ladies has converged in the capital for Tywin’s funeral. But first Cersei needs a minute alone to scold Jaime for freeing Tyrion and unintentionally causing their father’s demise. Ugh, incestuous bickering. Give me a break. Also, tell me there isn’t a distinct increase in laughing at funerals due to the presence of those googly eye rocks they put on the corpses in Westeros. Anyway, we are then reintroduced to Lancel Lannister, (Cersei’s scrawny second choice slumber party buddy) who seems to have found religion as a member of the Sparrows, a kind of cult. He confronts Cersei to ask her forgiveness for their immoral relationship and for drugging King Robert’s wine on the day he died. What?! Cersei and Lancel drugged Robert! That is so shocki… duh, we all knew that. The final short scene in King’s Landing has Loras in bed with Olyvar. Margaery interrupts and the siblings discuss how Loras’ potential marriage to Cersei probably won’t happen with Tywin dead.

Down in the Vale, Little Finger, Sansa and Lord Yohn Royce are watching Robyn Arryn getting whooped in a sparring session. He’s like Samwell Tarly bad with a sword. Yohn has agreed to take Robyn on as his ward to teach him to fight. But he just plain stanks. Little Finger and Sansa leave the Vale heading west. He told everyone they were going to the Fingers, but they aren’t. In cruel “Game of Thrones” fashion, their caravan passes right by Brienne and Podrick who are searching for Sansa. Those two don’t really accomplish much story wise. Brienne doesn’t want Pod around (we know that). They state that Arya didn’t want their protection (we know that). 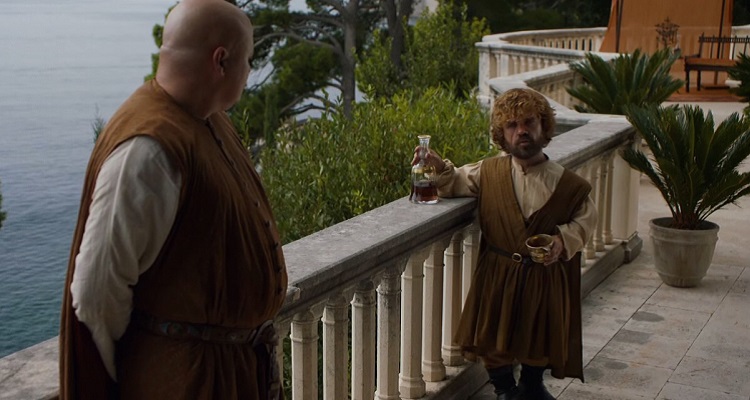 Essos Gets Some More Characters

Across the Narrow Sea we are treated to some really intriguing conversation. Did you know how one disposes of their feces when smuggling themselves out of a city in a crate? Well now we do thanks to Tyrion and Varys. After Tyrion complains about his plight a bit, Varys takes credit for how he and Magister Illyrio secretly set things in motion to put Daenerys in a position to win back the Iron Throne. Now Varys wants to ride to Meereen with Tyrion to meet Daenerys. Tyrion reluctantly agrees. We also get to see him barf. That’s not really important to the story, but I’ll mention it anyway.

There’s some frustrating stuff going on across Essos in Meereen with Daenerys and company. Firstly, some Unsullied remove the big gold harpy statue from on top of the pyramid in the least efficient way possible. They just rip it down and let it destroy stuff as it falls. Will no one think of the property damage!? Then one of the Unsullied goes to a brothel. But it’s just for some cuddling. The woman does pull her dress down though to fill HBO’s boob quota for the episode. A member of the Sons of the Harpy, a rebel group who wear creepy gold masks, kills the solider once his eyes are closed.

Daenerys is understandably peeved and orders the dead man to be buried at the Temple of the Graces. The party sent to reestablish peace in Yunkai has returned too. It turns out the people there really want their fighting pits to be legal again. Dany ain’t having it though. Later, in a conversation that is essentially presented as a backdrop to an unnecessarily long shot of Daario Naharis’ ass, he tells the queen his own story of success in the fighting pits and asks her to reconsider the ban. Oh and we also get a short scene where Dany goes to visit her dragons and they try to attack her. Maybe it’s because you chained them up in a dank cave, you dummy. She really should have seen that reaction coming.

Finally we get to the Wall, where we have a weird dynamic playing out at Castle Black. Sam tells Gilly about the frontrunners to be the next Lord Commander. That dusty old jerk, Thorne is one of them. Stannis, who is running things at the moment, tells Jon to convince Mance Rayder to bend the knee and convince the wildlings to fight for him. They would then go take the north back from Roose Bolton. Mance, of course, does not kneel. So he is tied to a stake to be burnt alive. To give him the dignity of a quick death, Jon shoots him with an arrow before the fire kills him. I imagine that was an insult to the Lord of Light or something. So we’ll see what Stannis says about it next week.

So that’s it for the Game of Thrones S5 E1 premiere. I’m hoping this was just a launching point for a big season to come because many of the storylines were quite static this week. The preview for next week promises Arya’s season debut, which I have high hopes for. But let’s not forget the highlight of this week’s episode; there was no Theon/Reek to be seen.