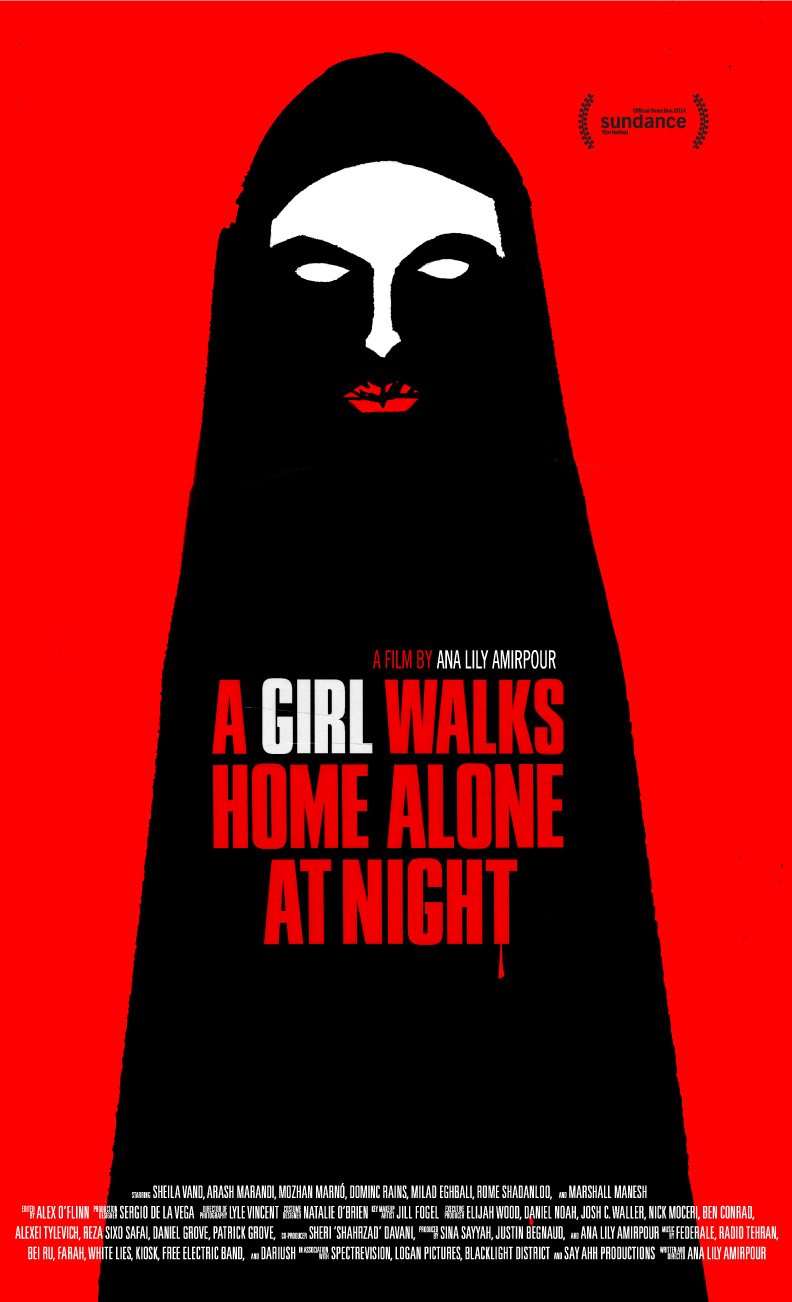 A feeling of collective anticipation lingered in the air as hundreds of fans packed a still brightly lit theater to see the first ever Iranian Vampire Western, A Girl Walks Home Alone At Night. Buzz about Elijah Wood’s appearance circled the room at a volume that could only be described as a loud whisper. Fans talked to each other as if they were all in on some big secret, as if they had not spent the week leading up to this night tweeting about it.

Wood stood at the front of the theater mere seconds after a festival staffer introduced him. He opened his mouth as soon as the microphone hit his hand, leaving no time for the crowd to react before he started speaking at a friendly, comfortable pace. He spoke for just over a minute, and that was that. Fans erupted in applause as he exited the theater at the pace of someone who is accustomed to leaving quickly. The crowd settled deeper into their seats and fixed their eyes on the big screen. The theater felt like nothing more than a big room with patterned carpet reminiscent of a 1980’s skating rink, sticky leather chairs and popcorn strewn across the floor again.

Wood is best known for his role as Frodo Baggins in The Lord of The Rings and The Hobbit, but he is also involved in the production of films that stray from the mainstream. He introduced Ana Lily Amirpour’s breakout film, A Girl Walks Home Alone At Night, at the Chattanooga Film Festival. Wood served as executive producer of the film, which is described as “the world’s first Iranian Vampire Western.”

In his introduction, Wood called this description both “leffading and misleading.” He went on to describe the film as “extraordinary” not once, but twice, and stressed that the entire project was born out of Amirpour’s vision.

The sweaty-palmed hype that left with Wood was replaced by an sense of optimism and expectation as the lights dimmed. A Girl Walks Home Alone At Night had Wood’s stamp of approval and the audience expected to be wowed.

The black-and white film treads in the waters of horror, but is just as much a vehicle used to deliver a not-so-subtle social message. A Girl Walks Home Alone At Night will not elicit screams of “DON’T GO IN THERE!” or send a queasy audience away with nightmares of blood and guts. It employs intense visuals, an expert incorporation of sound and sparse, but powerful dialogue to send shivers down viewers’ spines.

The film takes place in the fictional Iranian town, Bad City, and features a hijab-wearing, skateboard-riding young vampire who feasts on the blood of abusive men. The Girl (Sheila Vand) exists alone, in a world separate from the townspeople she stalks. Her only genuine, two-way relationship seems to be with a socially awkward boy named Arash (Arash Mirandi).

Vand’s genteel facial features and penetrating eyes make her mesmerizing as The Girl. The lack of dialogue makes Vand’s ability to communicate through movement and expression, without detracting from the sound and other visual elements, an essential storytelling element.

A Girl Walks Home Alone At Night is not all horror. Amirpour treats viewers to glimpses of romance and even comedy. In one scene, Arash takes a hallucinogenic drug and the audience sees the world from his point of view. The room is spinning in a carousel-like fashion, sounds are both amplified and distant and the look on Arash’s face is one of total confusion mixed with pleasure and a touch of nausea. Arash, clad as Dracula, proceeds to unknowingly go home with a real vampire.

Arash and The Girl share a naive, bur refreshing relationship. Environment, music and movement all come together to create the movie’s sweetest scene: Arash and The Girl coming together in a dance of warm passion under colored lights. Their locked eyes and progression of soft touches create something reminiscent of classy, low key erotica.

The non-descript setting and lack of environmental noise in the film promotes a sense of internalization. The film seems to be set in a state of being rather than a tangible place on the map. A Girl Walks Home At Night exudes a feeling of dark solitude, while encompassing a subtle sense of hope.

This internalized setting makes the frequent utilization of highlights seem natural. Everything the characters do is turned up. Emotion radiates off the screen and into the audience in each scene.

It is the overall emotional vibe of this film that make the horror scenes, well, horrifying. About half an hour in, The Girl runs into a curious little boy on the street. She comes up close to the boy and gives him a repeated warning, “be a good little boy,” followed by a threat. The scene, which involved no blood shed or even particularly graphic language, made the whole theater draw in their breath. The close shooting, pitch of The Girl’s voice and character movement all worked together to create an image that will stay with viewers long after the lights come back up.

As viewers left the theater, they called the content “beautiful” and the overall project “phenomenal,” but where this film really impresses is style, prompting comments like “amazing use of negative space” and “that was a cinematographer’s wet dream.”

A Girl Walks Home Alone At Night has garnered the enthusiastic approval of both Wood and viewers at the Chattanooga Film Festival. It did not just get rave reviews from casual moviegoers, but from people with intimate knowledge of the film industry.

The world’s first Iranian Vampire Western film was a hit, and film connoisseurs everywhere are waiting with bated breath to see what Amirpour comes up with next.

Ashley is a journalist and college student with a passion for justice and informed decision making. When she isn't running the school newspaper or saving the world, she can be found downing energy drinks and tacos to fuel her lifestyle.