Home NewsEntertainment The iTunes 99 Cent Movie of the Week: ‘Amy’
EntertainmentTV and Movies This week, the rise and fall of Amy Winehouse gets the documentary treatment in the Academy Award winning film, Amy. Singing Has Always Been Very Important To Me

There was a time when you couldn’t turn on a radio without hearing Amy Winehouse’s voice. Her sophomore album, Back to Black (2006) wasn’t just a hit, it was an outright sensation. The album’s success propelled Winehouse to legit super star status and netted her five Grammy awards. During that time, you also couldn’t pick up a tabloid without seeing her face on the cover. As Winehouse’s self-destructive personal life eclipsed her undeniable talent, she seemed destined to live up to the phrase ‘live fast and die young.’ It came as no surprise when Winehouse fulfilled that destiny in the summer of 2011. The gifted singer/songwriter was just 27 years old.

Four years after her premature demise, Director Asif Kapadia takes an intimate look at Winehouse’s much publicized life in his heartfelt documentary, Amy. With a stunning mix of home videos, behind the scenes footage, personal interviews, and first-person accounts from Winehouse’s friends, family, and collaborators, Amy offers an aching, intimate look at the life behind modern pop’s greatest sparkle and fade. I won’t claim to have been one of the weeping masses when Amy Winehouse died. My first thought when I heard she’d passed away was, “well, that makes sense.” It’s not that I didn’t care. I knew she had a powerful voice. And I knew she was a gifted songwriter. Anybody who heard songs like ‘Rehab’ or ‘Back To Black’ could tell you that. I also knew she was a junkie. And I just wasn’t a big fan of her music. Or her style. Truth be told, I’m still not. What can I say? Amy Winehouse’s death just didn’t affect me. Yet, at three separate moments in Asif Kapadia’s Amy I found myself on the verge of tears. Turns out there was more to this pop tragedy than met the eye. And Kapadia crafts a vivid portrait of the artist’s struggle to find peace in a world that wanted more from her than it ever had any right to ask.

Kapadia goes to great lengths to distance his film from that world. Much of Amy‘s emotional impact stems from the director’s intimate approach to the singer’s story. Kapadia pieced his film together from a trove of home video footage and personal photographs from Winehouse’s friends and family. The film’s biggest emotional punch stems from Kapadia’s use of audio clips featuring Winehouse’s own voice in conjunction with those personal images. Planting the clips under almost every frame of the film, Kapadia gives the illusion that we’re getting the story straight from Amy herself. And in many ways we are. Though Kapadia utilizes more formal interview clips with friends and family throughout Amy, the film’s deepest insights come in Winehouse’s own scathing dissections of her fame and her own fractured persona. At one point in Amy, the singer quips, “I write songs because I’m fucked up in the head.” As mixed up and insecure as Winehouse was, nobody understood Winehouse better than she understood herself. Music was her emotional ground-zero. The film’s central tragedy plays out as that music eventually becomes a burden. With little else to turn to, Winehouse found her only solace in chemical dependency.

As with any tragedy there are villains aplenty throughout Amy. Her sleazy ex husband (Blake) and selfish, opportunistic father (Mitch) play major roles in Winehouse’s drug-addled existence and eventual demise. You’ll cringe all the way through a late scene that sees her father interrupting Amy’s peaceful island detox by coming to visit with a reality TV crew in tow – and Blake digs himself deep into an emotional black hole every time he opens his mouth. The despicable tabloid media doesn’t fare much better. But Kapadia never ignores the fact that Winehouse was often her own worst enemy. The most heartbreaking moments in Amy come in the wake of some great achievements. It’s difficult to watch a sober Amy telling her friend how boring her Grammy’s party was without the influence of drugs … even though she’d just set a record for female artists by winning five awards. Watching her on the verge of panic attack when recording a duet with her idol, Tony Bennett, is especially difficult to watch when you understand how she will cope with the tension.

Underneath all the tragedy, it’s the music that drives Amy‘s narrative. After all, we wouldn’t know Winehouse’s name if her songs hadn’t been so good. And Kapadia spends much of the film examining Winehouse’s songwriting process and performances. Diehard fans will relish clips from the singer’s earliest performances on the UK jazz circuit. Non fans will discover an artist and a voice they didn’t even know existed. It’s a voice that still begs to be heard. That’s what makes Amy such a devastating and rewarding piece of cinema. 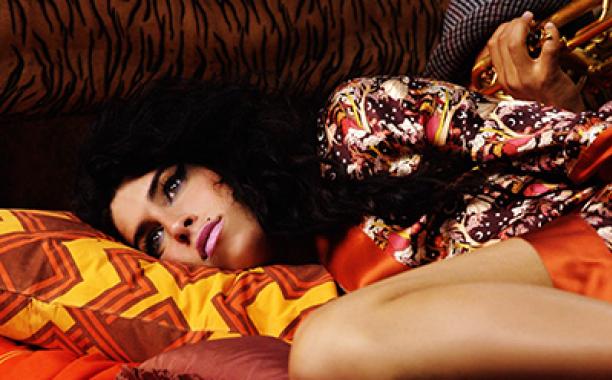 You bet. With an intimate, pull no punches approach, Amy is one of those films that gets its hooks in you and never lets you go. Whether you loved Winehouse or not, you’ll find yourself engrossed in the behind the scenes stories that inform Amy‘s tragic narrative. Along the way, you’ll get a look at the real person – tortured and insecure and insanely talented as she was – behind that narrative in a heartbreaking new light. You’ll even hope that the film can provide a happier ending than her real life did. Of course, it can’t. Tragedies are tragedies because they cannot be anything else. That Amy has that effect makes it worth your time, your energy and yes, your hard-earned dollar.