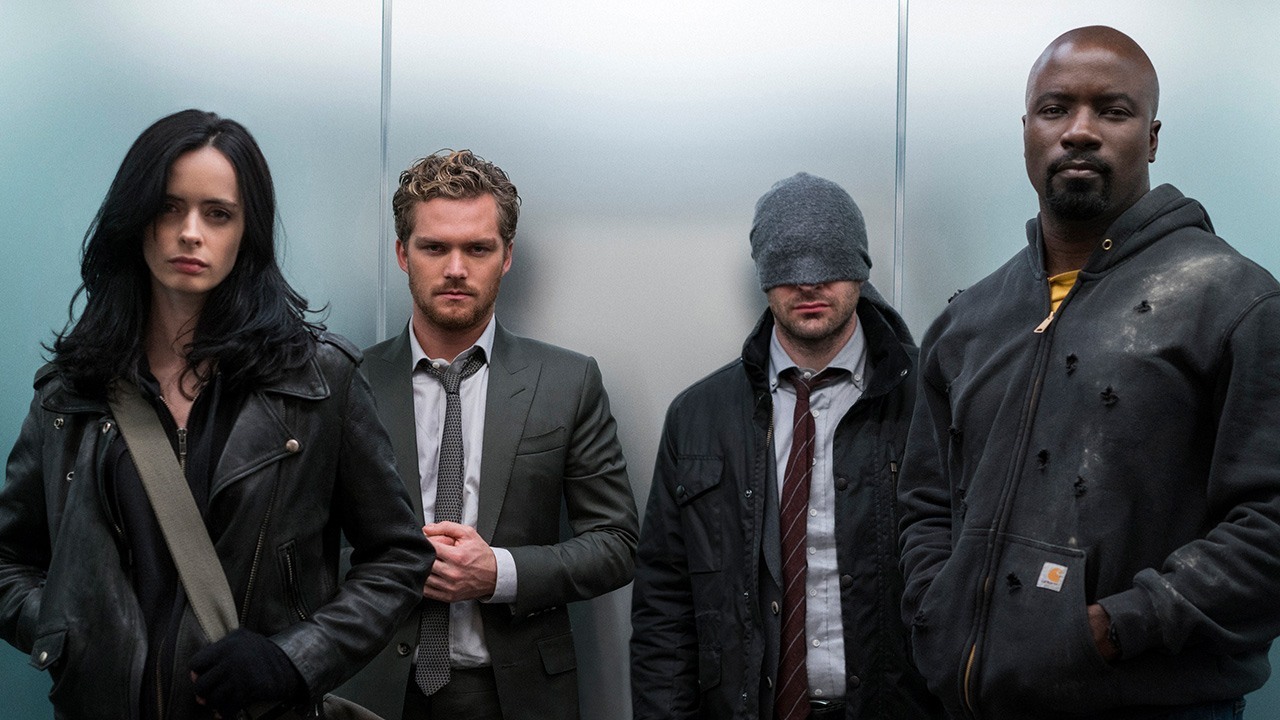 Not only does the group finally team up in episode 3, but we see what The Defenders are truly capable of. Namely, beating up bad guys in hallways. What an action scene that was. With that being said, the Hand still hasn’t developed past bad guys who want to do bad stuff. But we’re learning a little more each chapter. Here’s our recap of the third episode, “Worst Behavior.”

We begin with Alexandra out to eat. The main information we get from this scene is that people are afraid of her. Also she refers to Constantinople, the Turkish city that was officially renamed Istanbul almost 100 years ago. Could this be a slip up from a woman living an extraordinarily long life? Or maybe that was the name of another restaurant she goes to, the Constantinople Café. Her meal is interrupted by some of her cronies. It turns out this whole thing is a flashback. The reason they interrupt Alexandra is because they have Black Sky, the ancient weapon. It’s the dead body of Elektra collected at the end of Daredevil season 2. Stick killed another Black Sky, a young boy, on that season also. But apparently Elektra fits the bill. The Hand resurrect Elektra using that weird blood coffin thing. She’s quite confused when she wakes up. We learn that her instincts and skills slowly return over time. Her memories and feelings, not so much. During her training, we see her beat down various Hand ninjas. Alexandra knows she’s ready when she is surrounded by armed assassins in the dark with no weapons and she emerges victorious. How awesome are these fight scenes!

Now we get back to present day. The last episode left us with Stick chained to a poll, Alexandra’s hostage. The main topic she wants to know about is Iron Fist. Stick only seems to think he’s a weapon. Could he be the key to that secret door Madame Gao was having a hard time getting through last episode? Sounds like it. Well, good thing Danny has been off-the-grid. It would be a real shame if he walked right through the Hand’s front door while they’re looking for him… More on that later. Stick notices Elektra, but she doesn’t react to him. After a scuffle, he escapes by cutting off his hand and sneaking through a vent. Claaaassic Stick.

Matt isn’t having much luck with Jessica at the police station. She’s so annoyed with Jeri Hogarth at the moment, she won’t consider working with Matt because of his loose ties with that firm. She leaves to continue her investigation of the John Raymond case. He did kill himself last episode before the Hand could take him out. But there are even more questions now. So Jessica isn’t giving up the case that easily. She visits John’s wife and daughter. But it seems they don’t know anything. His wife says he was only interested in his family and his job. Jessica notices an architecture award and leaves.

Walking the streets, Jessica realizes she’s being followed. Have the Hand come to kill her? No, it’s just Matt. There’s an interesting cat and mouse scene where it’s unclear who actually has the jump on who. But Matt bails through an alley when he realizes she’s now following him. He parkours his way out of the dead end alley. But not before Jessica snaps some photos. She continues her investigation to the architecture firm John Raymond worked for. Under the guise of a potential client, she learns about John’s most recent work. It’s a building in Hell’s Kitchen called Midland Circle.

Across town, Luke updates Claire on what he found last episode. He’s upset that he left Cole behind to get arrested. He also has an injury for the first time in a while. His jaw is sore. Claire connects the dots here when Luke says the guy who punched him had a glowing hand. “There’s someone that you need to meet.” At Colleen’s dojo, Luke and Danny formally meet for the first time. They basically just bicker back and forth. Luke thinks all of the mystical K’un Lun stuff sounds crazy. But as this is the first time Luke is hearing about the Hand, it’s a good opportunity for Danny and Colleen to recap everything we know about the organization to the audience. They can bring back the dead. They attacked Claire’s hospital. White Hat works for them.

Colleen and Claire leave the guys alone to get to know each other. It’s pretty awkward at first. The conversation then falls apart when they get to the confrontation with Cole. Danny argues that anyone involved with the Hand at any capacity is guilty. Luke points out that Cole and the others needed a job in order to feed their families and have nothing to do with the Hand. It’s an important conversation on race that you rarely see on mainstream television. Luke points out that Danny’s privilege and wealth have influenced him to only see ideals. He may have earned the Iron Fist, but the money has played a role in his life path. Luke, Cole, and the young black men taking the clean-up jobs from the Hand have to worry about survival first. As a result, Cole is sitting in a jail cell.

Later, Cole is annoyed when Luke visits him in jail. It’s bringing too much attention. Cole asks Luke to bring his mom some lottery tickets to show he’s been thinking of her. Luke follows through and visit’s Cole’s mom, Delores. She keeps her lottery tickets in a box on a high shelf she can’t reach. Cole always puts them in there for her. When Luke takes down the box he finds a big role of money with a piece of paper on it labeled “Midland Circle.” Just then Delores gets a phone call. Cole died in his cell. We aren’t given any details, but we know the truth. He was surely killed by the Hand.

After his verbal dust up with Luke, Danny is reconsidering his methods. He is going to try using his access through Rand Enterprises to get to the top of the Hand. He arranges a meeting and tells one of his executives about the Hand’s shell companies. She cross references the locations Danny and Colleen know the Hand have done business. A number of those businesses have made deposits to a place right there in New York. You guessed it, Midland Circle! Back at Colleen’s dojo, she has a visitor. Stick shows up bleeding and handless. He collapses. “Where’s the Fist?”

Danny rolls up to Midland Circle demanding a meeting with the CEOs. He’s even wearing a suit. After being escorted upstairs to a boardroom, he threatens everyone and explains that he knows they’re the Hand. Alexandra joins the meeting interested to hear what Danny has to say. We know from earlier that she was looking for him. Well here he is in her boardroom. He reveals he is going to expose the Hand’s many criminal enterprises.

In the lobby, Jessica shows up to investigate. Matt is right behind her. He knows the Hand are involved and tells her to leave. Jessica threatens him with the photos of his parkour. But he instantly smashes her camera. So no blackmail today. Upstairs, the whole boardroom stands to take on Danny. He is very outnumbered, but does pretty well. Those with guns are only shooting tranquilizer darts. They need him alive. He is finally overwhelmed by sheer numbers when Luke breaks down the door. The scene’s music shifts. Luke is leading the charge now.

Matt, hearing the gunshots upstairs with his head-tilting super hearing, takes Jessica’s scarf to hide his face and dashes to the stairwell. When he gets to the top floor, Jessica strolls out of the elevator. Her catch up with Luke is short. You remember they… got to know each other on Jessica Jones season 1. Other introductions have to wait. Matt senses something else coming. It’s Elektra and an epic hallway fight. They have become a hallmark of the Marvel Netflix shows. A bunch of bad guys attack our heroes in a narrow hallway. This is another good one as Danny, Jessica, and Luke take on the hallway villains one at a time, Matt battles it out with Elektra. It’s not until she’s about to issue the death blow when Matt senses it’s her. She doesn’t seem to recognize him. Danny jumps in just in time to Iron Fist punch Elektra through the wall and save Matt. I anticipate he’s going to have a hard time dealing with the fact that his long time girlfriend who was killed has been resurrected to fight with the Hand.

The episode ends with our hero shot. Jessica, Danny, Matt, and Luke stand side by side in the elevator. Danny looks around and mutters, “Who are you people?” I’ll tell you who! THE DEFENDERS. Okay, they haven’t agreed on a name yet. Maybe they’ll decide on some type of wordplay involving the Hand. “The Gloves” because we cover the Hand. “The Wrists” because we control the Hand. No, it’s The Defenders. I know because it’s the title of the show.

Will VR Be Mainstream for the Next Generation of Gaming?

Constantinople fell in the 1400s buddy. That’s a bit more than a hundred years ago.

Hi guest. Thanks for reading. You are correct. Constantinople did fall in the 1400s. However the name was still commonly used for the city until 1930 when it was officially changed to Istanbul. You can read about that here (https://www.britannica.com/place/Istanbul) if you’re interested. Have nice day.