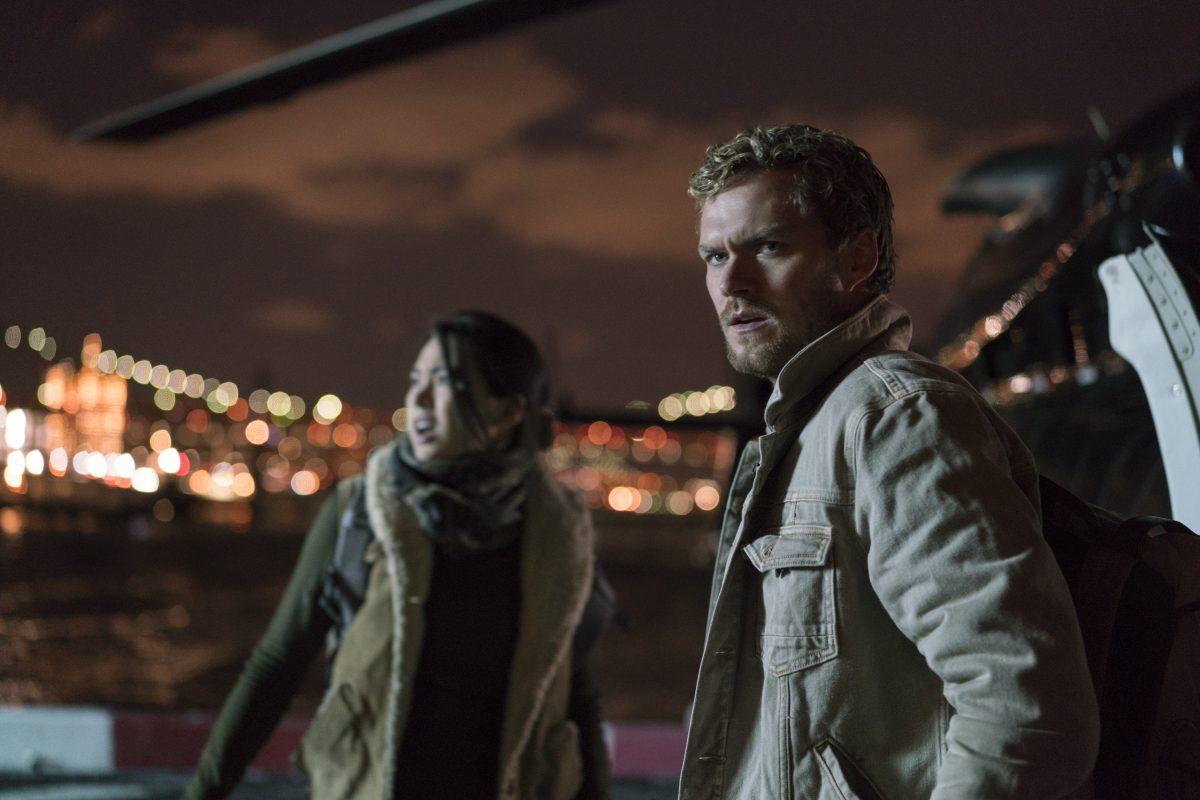 Have you finished all eight episodes of The Defenders yet? It’s the risk of a bingeable series. You have about a day before the spoilers are out there online. Well we’re going to take a more deliberate pace going through the show. Look for our recaps about once a week. If you watched it all in eight hours on Friday, then watch it again with us. Here’s our recap of the series premiere of The Defenders.

This first chapter was essentially a group of short episodes catching up with each of our characters. They kept the familiar color schemes of the individual shows we’re used to. (Daredevil- red, Jessica Jones, purple, etc.) It wasn’t until the final moments that we saw the characters have anything in common. We’ll start off by looking at Danny Rand like the episode did. The open has a mystery guy fighting a mystery woman (let’s call her Shmelektra) in the sewers of Cambodia. We learn that Danny and Colleen Wing are seeking out sewer man to help them find the Hand. Iron Fist season 1 ended with Danny and Colleen finding K’un-Lun abandoned with dead Hand people scattered about. (Now I’m picturing monks with giant hands for bodies. But these were normal people.) Back to the sewer. Danny successfully fends off Shmelektra. It’s a back and forth bout until Danny uses the iron fist. Like any good video game, that finishing move does the trick. But after the iron punch, Shmelektra disappears. Danny and Colleen get one short chance to speak to the man. As he dies from his wounds, he admits he knows Danny is the Iron Fist and tells them to go home. The real fight is in New York City.

We get another scene with Danny and Colleen on a private jet. Danny has a big guilty nightmare with his old pals from K’un Lun dead. Then if that wasn’t clear enough, a second dream Danny addresses real Danny to tell him it’s his fault the Hand have won because he abandoned his post at K’un Lun. When he wakes up, Colleen comforts him and says it wasn’t his fault. My wife and I paused this scene to discuss two topics at length. 1. In the dream, Danny is just out of the shower. Do private jets have showers? We think you’d probably slip and fall a lot if that’s the case. 2. How did Danny get his classic iPod back? He left it behind early in Iron Fist. Did he buy another old iPod? Why wouldn’t he just get a new iPhone? The dude is rich.

Somehow the Iron Fist opening scene was the lone fight sequence in this entire episode. But that doesn’t mean nothing else interesting happened. It’s been a while since we’ve seen Jessica Jones. She’s hanging out at a closed bar in the morning, as you do, before meeting up with her old pal Trish Walker. Trish tries to convince Jessica to tell her story to the media. She isn’t interested even though it would surely help with her PI business. Back at Jessica’s apartment, which has become a perfectly damaged character in itself at this point, she has a potential client. A man has been missing for a week. His wife and teenage daughter are there for help. Jessica dismisses them saying that he’s likely cheating on her and this happens all the time. The angsty teenager is basically a denim jacket cosplay version of Jessica, so I have a feeling we’ll be seeing these two again.

Immediately after their conversation, Jessica gets a mysterious phone call telling her not to investigate John Raymond, the husband. Well now her interest is piqued. Jessica is doing some research on Mr. Raymond when her neighbor, Malcolm, comes by and quickly becomes interested in the case. They are able to trace the call to an area Malcolm knew from his days as a drug user. He says it’s a place people go to get off the grid.

We see Luke Cage’s celebrity status has followed him to prison. He meets with his lawyer, a certain Foggy Nelson, before getting released. He then hops on a bus to return to New York and his beloved Harlem. Claire Temple, our favorite nurse/surgeon/love interest/martial arts student/get away driver /person who always asks way too many questions of our superheroes, is waiting for Luke at the bus stop. They head back to her place and… catch up. Afterwards Luke is anxious to find out what’s been happening in Harlem’s criminal underbelly. Misty Knight comes to the door to say hello. On a nice leisurely stroll, they discuss taking down Mariah and Shades, the last villains standing from Luke Cage season 1. Misty has been promoted to a city-wide position. So she’s not just in Harlem anymore. She brings a case to Luke’s attention where young adult men in Harlem are getting hired for well-paying/secretive jobs and then turning up dead. One of these men was brother to a girl who died in Luke Cage season 1. They also have another brother, Cole, who is seemingly on the same path. So Luke gives him a visit. Cole isn’t that interested in talking and gives Luke very little information before asking him to leave.

Our fourth Defender, Daredevil, isn’t doing much crime fighting at the moment. Well he is, but from the courtroom as Matt Murdock. He wins a case where a young boy has been paralyzed due to a company’s negligence. He then gives the boy a nice speech about how he has to take his own life back after suffering the disability. No one can give it back to him. Karen Page is there doing her reporter duties. She asks Matt out for lunch. They catch up, and in turn catch us up on what they’ve been doing. He tells her he doesn’t miss his Daredevil alter-ego. But he’s lying. He heads off to confession and tells the priest as much. Father Lantom, who we saw regularly throughout Daredevil, says that the need to lie shows Matt’s indecision. His heart and soul are not aligned. Elektra also comes up. But she’s dead… Isn’t she??? (Notice the three question marks. More on that topic in a minute.)

We see one additional perspective in this first episode. The new villain, Alexandra, gets some bad medical news. She has a terminal illness and won’t live much longer. She meets up with Madame Gao in Central Park, where Alexandra is feeding the pigeons. She speaks eloquently about how she hates New York City then tells Gao to move up their mysterious/villainous timeline. Gao thinks it’s too rushed but Alexandra doesn’t care. She also tells Gao to finish feeding the pigeons. Power move! Later, the two meet again on a fancy rooftop garden. Gao says everything is ready to go.

Investigating the apartment building near the mysterious payphone call, Jessica breaks into a room and happens upon cases of explosives. That’s where she is when it hits. A massive earthquake shakes the entire city. Matt hears it first with dogs barking and car alarms in the distance. Jessica looks to the explosives nervously as the room shakes. Danny and Colleen are on a helipad having just gotten back to the city. They have a view as the lights go out in the skyscrapers and screams echo through the air. Luke catches a falling street light before it hits the mother of the deceased brother and sister. Elektra, hooded and looking uncomfortable, joins Alexandra on the rooftop. “It’s just a city. You’ll get used to watching them fall.” The episode ends with Matt, who is frozen with the sounds of screams, cries, sirens, and panic. Even if they’re not together yet, it looks like the city is going to need the Defenders.