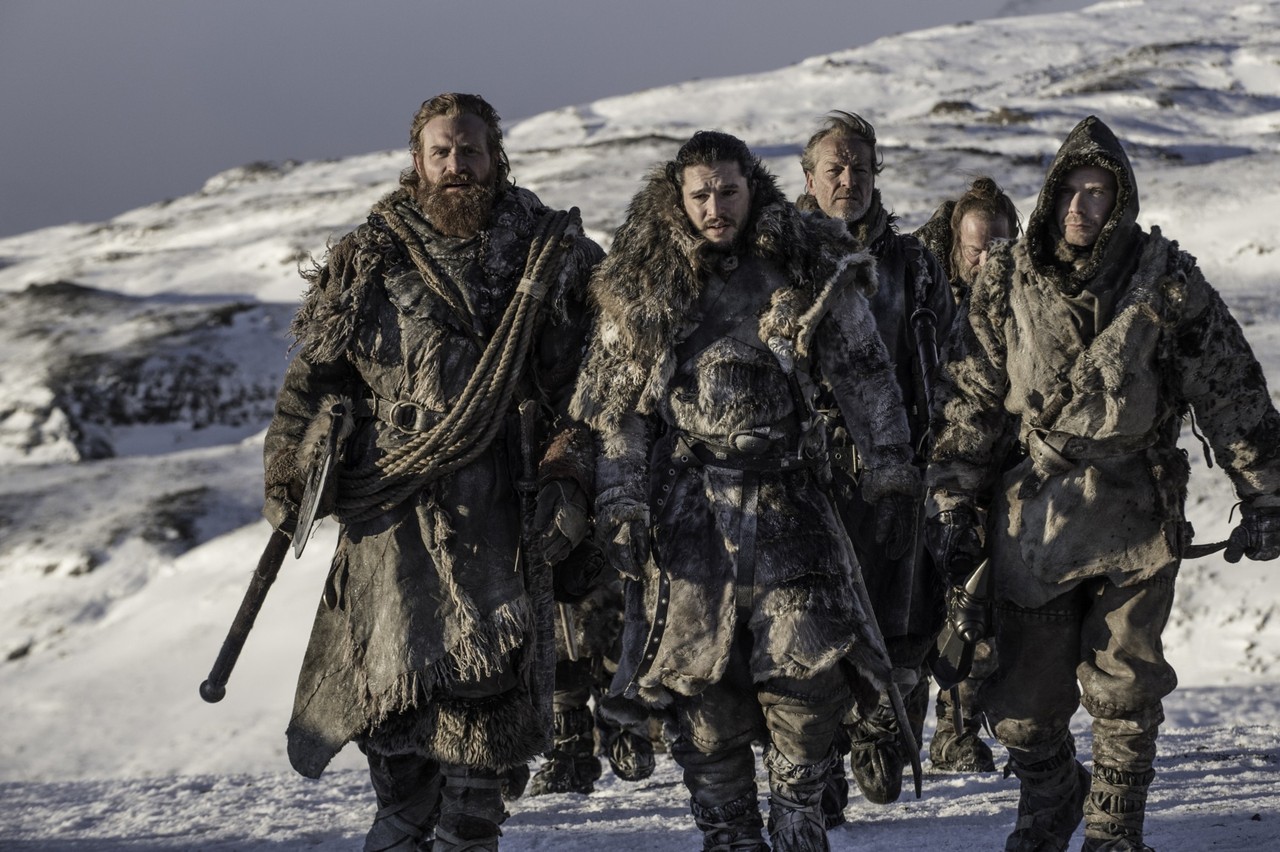 It was all about taking wildcards off the table this week on Game of Thrones. Three separate individuals who have acted as “get out of jail free” cards in the past bit the dust in this penultimate episode of season 7. At this point if characters go “Beyond the Wall,” which happens to be the name of this episode, it’s safe to assume some folks are going to die. Here’s our recap.

Most of the episode was related to Jon’s campaign to bring a wight back from the far north in order to convince Cersei and others that the army of the dead is real. But in addition to that, Sansa and Arya bickered at each other for a while. I guess that’s important too. But dragons were frying zombies in the other storyline! Let’s recap it anyway. After stealing the scroll from years ago when Sansa asked Robb to pledge his support to Joffrey, Arya confronts Sansa about it. Sansa’s logic makes sense. She was a child and Cersei forced her to do it. But Arya isn’t having it. She points out that Jon would believe Sansa, but would the northern lords? Lyanna Mormont is currently younger than Sansa was when she wrote the note. Would she accept that Sansa was just a child? No because Lyanna Mormont is awesome.

Sansa meets with Little Finger to tell him about Arya finding that note. He says he doesn’t know how she found it. He’s lying! He knows! His suggestion is to have Brienne intercede. Since she is compelled to protect both Stark daughters, she would potentially defend Sansa against Arya’s threats. Sansa seems to like the idea until she inexplicably sends Brienne away. A scroll from King’s Landing arrives requesting Sansa to report for a meeting in the capital. Knowing what happened to her father, grandfather, uncle, brother and potentially her half brother, Sansa decides she needs to stay in the North and rule from there. All those other people went south and were eventually killed by enemies. (Jon wasn’t. But she doesn’t know where he is or what he is up to.) Brienne reluctantly agrees to go.

Sansa sneaks into Arya’s room trying to retrieve that scroll. Instead she finds a file folder full of human faces. Nice to see Arya is organized. As Sansa silently tries to figure out what she’s looking at, Arya is somehow in the room without making a sound. Sansa is quite creeped out at this point. Arya tells her she was training to be a Faceless Man. Then she threatens to take Sansa’s face. I don’t think I ever used that threat when I was arguing with my brother. Ultimately Arya just leaves. Sansa is creeped out, but still has a face. She should consider that a win.

North of the Wall, Jon’s group is facing the frozen elements. There are some fun interactions with characters who haven’t spoken, or have rarely interacted, before this point. Jon and Jorah discuss Lord Commander Jeor Mormont. Jon tries to give Long Claw, the ancestral sword of House Mormont, back to Jorah. But he tells Jon to keep it. Gendry continues to harp about the Brotherhood Without Banners selling him to Melisandre. Beric and Thoros explain their reasoning. But it isn’t until the Hound tells him to shut up because he’s still alive that Gendry quiets down. Tormund and the Hound have the best conversation though. Tormund presses the Hound about how he got his face burned. Then Tormund begins talking about Brienne. The Hound is well acquainted with her. She defeated him and then kicked him off of a cliff. The whole exchange is so fun, I was sure one of them was going to die soon.

In a particularly blizzardy part of the North, the group is attacked by an undead polar bear. It kills some of the Wildling extras that have been meandering in the periphery. Beric and Thoros both ignite their swords in unison. But it doesn’t help much beyond looking awesome. Thoros is pinned and wounded by the bear. Jorah eventually stabs and kills it. Beric burns Thoros’ wounds so he can continue on. They find a small group of wights being led by a lone White Walker. This is the only realistic way this crazy plan could work. They ambush the group and Jon is able to kill the White Walker. When he does so, almost all of the wights fall apart. Luckily one is left standing. They tie it up, but not before it screeches to alert the White Walkers and the army of the dead, who aren’t that far off. Jon commands Gendry to hurry back to Eastwatch and get a raven to Daenerys asking for help. Apparently he’s been doing some fun running while living in the slums of King’s Landing. He makes it back in record time before collapsing. The rest of the group runs for their lives away from the army. They emerge onto a frozen lake that begins to crack. They have nowhere else to go. So they continue on to a small island in the middle. When the dead run onto the ice, it collapses under the weight. For the time being, the group is safe with a moat around them.

On Dragonstone, we do have one scene with Daenerys before Gendry’s raven arrives. Tyrion and Daenerys are chatting about the potential meeting with Cersei in King’s Landing. He says they are going to bring the dragons, Unsullied and Dothraki with them and if anything happens to Daenerys they’ll destroy the city. But they won’t have any tricks planned for Cersei. They’re trying to do things the right way. Dany is “breaking the wheel.” Yes, that’s her favorite saying right up there with “bend the knee.” Tyrion again voices his concern that Dany burnt the Tarlys last week. Also there is a little squabble about who will succeed Daenerys as queen/king after she dies since she believes she can’t have children. She isn’t interested in that at the moment. They’ll deal with it after their victory.

After receiving word from Eastwatch, Dany is quick to don her all weather dragon queen jacket to go and save Jon, Jorah, and the others. Tyrion begs her not to go. He is worried about her safety. If she dies the cause dies too. But we know from a few weeks ago, Daenerys is tired of doing nothing. She climbs on Drogon and departs with Viserion and Rhaegal close behind.

A number of hours have now passed up on that frozen lake. Thoros has died as a result of his wounds. They burn his body and Beric says some words. The Hound is getting bored and throws some rocks at the wights. One rock falls short revealing to the undead that the lake has frozen over again. Party time. The group pick up the fight killing the wights one by one. The Hound saves Tormund from getting dragged under the ice. The remaining Wildling extras meet grizzly deaths. Just in time, Daenerys arrives and the dragons lay waste to the army. The ice is melting, the zombies are disintegrating and it looks like another victory grabbed from the clutches of defeat.

But the Night King and the White Walkers are looking on. The Night King tosses his ice spear a ridiculously long distance and strikes one of the dragons. Most people don’t know this, but the Night King won the gold medal for ice javelin in the Long Night olympics years ago. Looks like he’s been staying in throwing shape. It appears that the dragon that was felled is Viserion, named after Daenerys’ dingus brother, Viserys. It’s a brutal death. The blood is pouring out as he crash lands onto the lake and disappears under the ice.

Everyone is understandably a bit shaken up by this. But they have to go because the Night King is gearing up for his second throw. Jon stays fighting off wights so that Daenerys can take off with the rest of the crew and the wight hostage on board. Jon is tackled through the ice, but he is able to emerge more icicle than man. It looks like there is no escape. Then Benjen Stark rides in from out of nowhere. Remember he’s like half of a White Walker now. He had a brief interaction with Bran and Meera last season. He gives Jon his horse and stays behind to go out fighting.

Jon wakes up on a ship with Daenerys looking over him. Her eyes are drawn to the scars he has from being stabbed to death. Or is she just checking out those washboard abs? Daaamn… It was probably the scars. Jon apologizes for going on the mission and Viserion’s death. Dany says she isn’t sorry. She needed to see the White Walkers for herself. She decides she will fight with Jon in the war to come. Jon calls her Dany, a name she hasn’t been called in a long time since she has taken on her various titles of authority. He then corrects himself and calls her his queen. So he finally pledges his loyalty and the North to her cause. Well the North isn’t going to be happy. But they’re never happy. The two also held hands through a lot of this scene. That means they’re going to get married. Just ask any fifth grader who has a boyfriend/girlfriend. Holding hands = marriage. That’s still the case on Game of Thrones.

The episode ends with the zombie army fishing Viserion out of the lake. The Night King strolls up and touches him. Cue close up on his eye. Don’t open. Don’t open. Don’t open. It does and it’s blue. Well the White Walkers have a dragon to join their polar bears, giants, and humongous human army. That’s not good. So Thoros of Myr died. It doesn’t look like anyone will get resurrected from the dead now. Benjen Stark died. So he won’t be swooping in to save anyone else at the last minute. And a dragon died, one of the trump cards that always eliminated all enemies in any situation. This makes the impending war even more impossible than it already was. Also, it’s not the important part of that final scene, but where did the White Walkers get those giant towing chains? Hardhome Depot? Thank you. Thank you. I’ll be here for one more week!