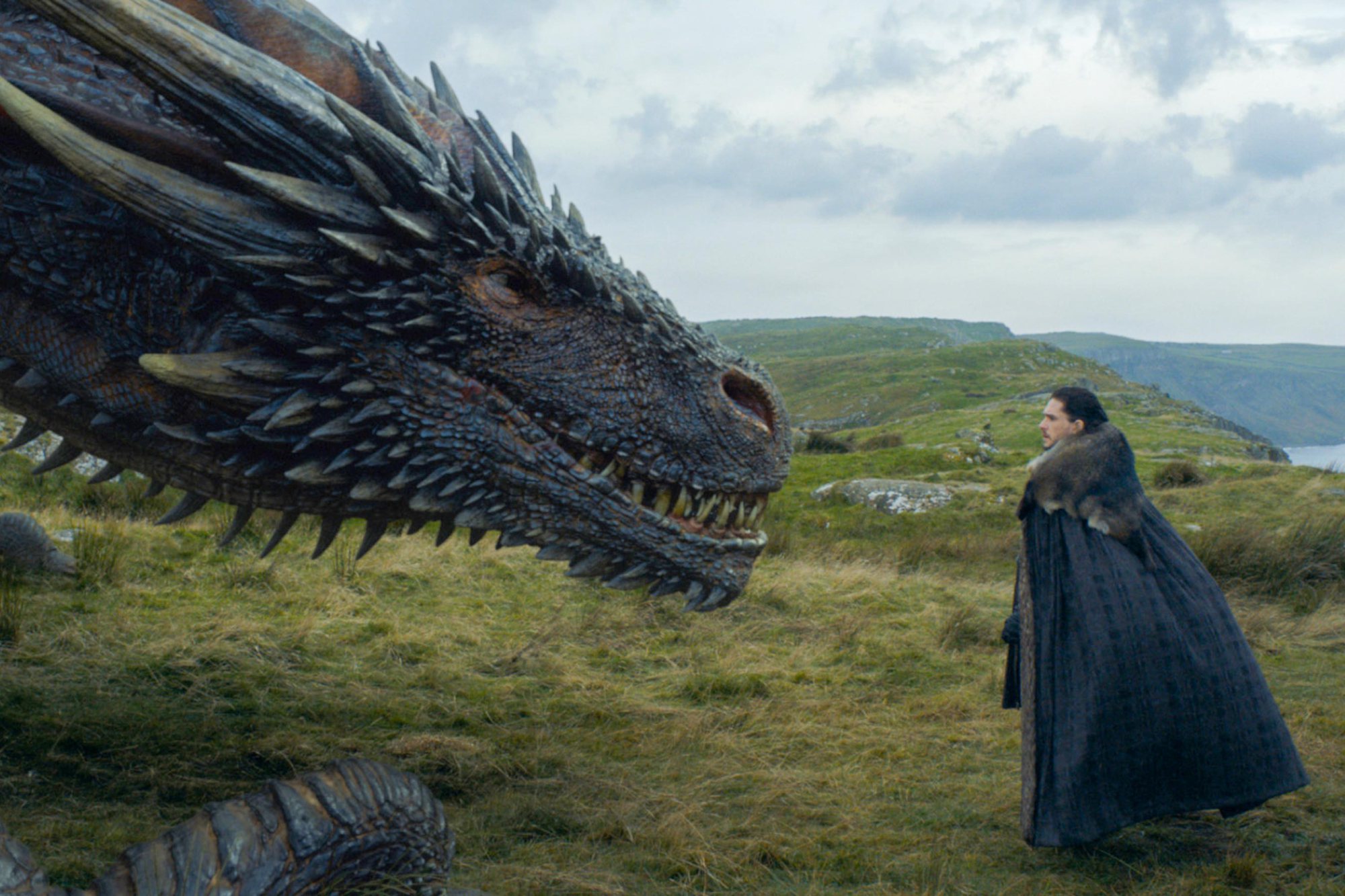 I don’t know how many times I can say this season of Game of Thrones is heating up. The more accurate description this week is cooling down. The focus has shifted to the North, the White Walkers, and the army of the dead. But we didn’t see much of them yet. Instead we had characters meeting, old friends returning, old enemies reconciling. All this while Bran sits alone by that tree. Bran! Turn that tree off and go outside and play with the other kids. Here’s our recap of “Eastwatch.” 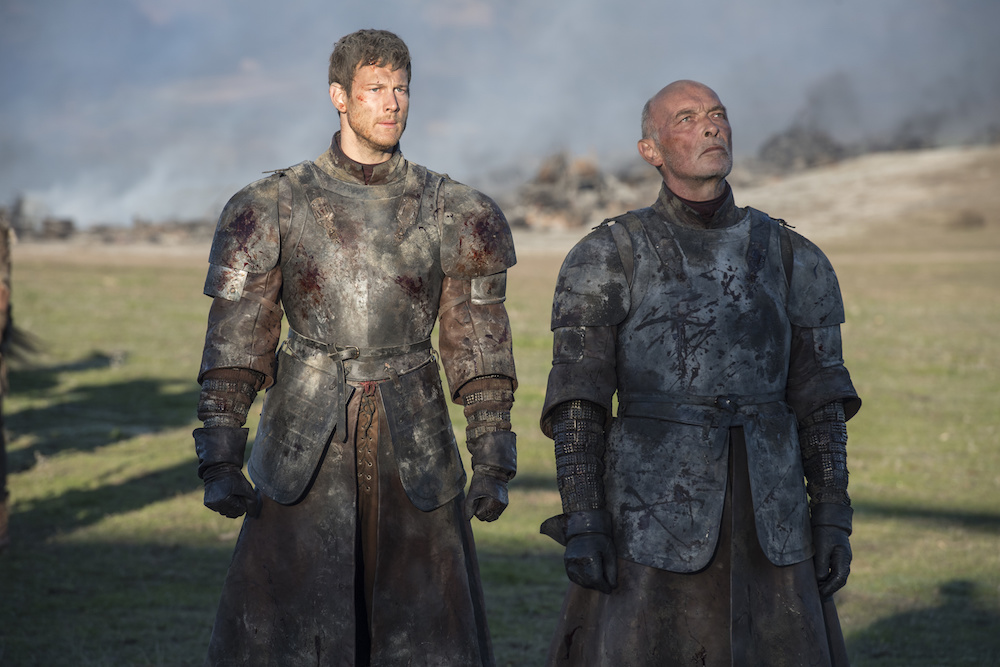 After the major barbecue last week, we were left with some questions. Was Drogon seriously hurt? Apparently not, he’s back to dracarys-ing folks. Did Jaime drown when he fell into that curiously deep watery abyss? No, Bronn saved him yet again. The two flop on shore away from all of the carnage. Bronn acknowledges that he is about done working with the Lannisters. The dragons have changed things. Then the two somehow just walk away. Aren’t there Dothraki looking around for fleeing survivors? Doesn’t Tyrion acknowledge that Jaime hasn’t been found? Apparently not. The surviving Lannister and Tarly soldiers that have been captured are marched toward Daenerys and Drogon. They’re given a choice. It’s Dany’s favorite choice this season. Just bend it, bend it. Get down on one knee and bend it… or die. (Like Michael Jackson’s “Beat It.” It’s all I kept thinking during this scene.) So we get another scene of melting bodies. Sam’s dad and brother, Randyll and Dickon Tarly, resist due to their pride. Tyrion, knowing these are the heads of another proud Westerosi house, urges Dany to put them in a cell or let them take the black. She isn’t having it. With a large crowd of onlookers, she keeps her word and incinerates them. Everyone else is quick to bend the knee after that.

Let’s move on to Mr. Raven at Winterfell. Bran wargs into a flock of ravens, which flies past the Wall and finds the White Walkers not too far away. FYI, my research tells me a flock of ravens is called an unkindness. How weird is that? The Night King notices the ravens and Bran is brought back to his own body. He Asks Maester Wolkan to send warnings of this impending doom to all of Westeros. Meanwhile, the reunion between Arya and Sansa isn’t going quite as well as they may have thought it would. Arya sees Lord Glover and Lord Royce tell Sansa that they would like to serve her, not Jon. Sansa thanks them for the compliment, but declines saying that Jon is the chosen king. These dudes can’t make up their minds. You don’t give a rousing speech after a bloody battle and end it by declaring a guy King in the North and then change your mind because he goes on vacation.

Arya continues lurking around and visits Sansa. She accuses her older sister of wanting the power for herself. Sansa denies it. Arya later sees Little Finger sneaking around and whispering with various folks. First a commoner woman, then Lords Glover and Royce. Then outside of his chambers, Maester Wolkan gives Little Finger a scroll. Arya sneaks in Little Finger’s room and finds it. It was the message Sansa was forced to write after Joffrey beheaded her father. It asks the Starks to pledge fealty to Joffrey. Most people know she was forced to write that, but I wonder if Arya does. She has been gone for a while. As she leaves Little Finger’s room, we see he is watching from down the hallway. Isn’t this an intriguing battle of wits. The girl with no name vs. the man with… little fingers…

In the Citadel, Archmaester Ebrose is having a meeting with the other important folks discussing the message sent from Bran about the White Walkers. They are leaning toward not believing it when Sam comes in to drop off some books and interrupts. He gives his usual, true thoughts on the topic about the army of the dead being real and terrifying. Ebrose tries to appease both Sam and the group by saying he will write to Maester Wolkan for further clarification. Later, Sam is reading/writing with Gilly but he can’t shake his frustration with the maesters. Gilly keeps telling Sam about what she is reading. He’s too distracted to care. Maybe he should be listening because Gilly drops the little ditty that Prince Rhaegar Targaryen had his marriage annulled and he was married again in a secret ceremony in Dorne. Sam interrupts and shouts his annoyance with the inaction of the maesters, not really hearing what Gilly had said.

We know enough to develop this passage more thoroughly. So apparently Rhaegar had his marriage to Elia Martell annulled so that he could marry Lyanna Stark in secret. We know for a fact, from last season, Jon is the son of Lyanna and we are all but certain Rhaegar is the father. Now this means that Jon is not the bastard son of a Targaryen and Stark like we thought. He is the trueborn son of a Targaryen prince. Jon would be Daenerys’s nephew. At this point in Game of Thrones no one is all that interested in your lineage as a claim to power. It’s all about strength and armies and such. However, this is going to be a big development when the characters learn about it. Back to Sam and Gilly for a moment. Sam has had enough with the Citadel and decides to leave. He goes back to steal a bunch of books and then departs with Gilly and baby Sam.

At Dragonstone, Jon Targaryen/Snow is on the cliffs when Daenerys returns from the battle with the Lannisters. After landing, Drogon seems intrigued by Jon and even allows him to pet him. The Dothraki approach with Jorah, all healed from his greyscale. Dany welcomes him back with a hug. Anyone else notice how windy this scene was? It must have been a task to keep Jon’s hair in place while filming. The King in the North can’t exactly have a baseball cap on in one scene. Back inside the wind free castle, Tyrion and Varys discuss preventing Dany from losing control and turning into her crazy father. Varys also received Bran’s message. Jon is particularly surprised by this message since he thought Bran and Arya were both dead. Jon decides that it is time to leave since the Walkers are getting so close. He doesn’t have enough men, but it’s time to act. Dany is reluctant again to join him due to Cersei still ruling on the Iron Throne. But Tyrion has a plan. If they can present Cersei with one of the undead men from north of the Wall, then maybe they can convince his sister to join them in the fight. Does anyone believe this plan will work? I do not. The first reason, Cersei is a crazy person. Jon departs to go north and get the wight/dead person. Tyrion departs with Davos for King’s Landing to try to meet with Jaime who will in turn convince Cersei to meet with them. Again, what could go wrong?

It doesn’t take long for Tyrion and Davos to arrive in King’s Landing. The Onion Knight uses his smuggler skills to bring them to a secluded beach. In the dragon skull storage locker under the Red Keep, Bronn brings Jaime down to train. It’s all a ruse though as Tyrion is waiting for them. Tyrion tries to defend his killing of Tywin, but Jaime isn’t interested in hearing it. Jaime can’t decide if he wants to hug his brother or kill him. Tyrion asks Jaime to request the eventual meet up with Cersei and then leaves. Jaime delivers the message to Cersei, but she already knows Tyrion was there. Jaime reveals that Tyrion didn’t kill Joffrey, Olenna did. Cersei is peeved. The Queen also thinks a meeting with Daenerys is a good idea. Not because she believes Tyrion’s warning about the dead, but because she is losing and needs to be clever to defeat Daenerys. Who knows what that means. Oh and Cersei is pregnant. Jaime is the father. They decide to name the baby, Awful-Timing Lannister.

While this is all going on, Davos is wandering around King’s Landing. He’s looking on the Street of Steel for a certain someone who has been MIA since season 3. Gendry is back working on swords and armor and the like. It’s good to see he made it to dry land eventually after his row-boat escape from Dragontone. Davos asks Gendry to leave with him and he instantly agrees. He says he’s been training and now he has a crazy warhammer. That’s the weapon his father, King Robert Baratheon, was famous for. Whenever I read the word warhammer I think of Donkey Kong throwing hammers at Mario. Apparently this is different. We see that quickly as Gendry bashes in the heads of two guards that recognize Tyrion as the trio make their way out of King’s Landing.

Everyone regroups on Dragonstone before they depart. Gendry introduces himself to Jon and they talk about the friendship of their fathers and also how they are both similar and different to Robert and Ned. (Jon is talking about Ned here. He still doesn’t know about Rhaegar.) They are formal, then joke around a bit, then instantly seem to find a connection. Did we just become best friends? Yup. Jon, Davos, Gendry, and Jorah leave Dragonstone for the Night’s Watch castle of Eastwatch-by-the-Sea. When they arrive, they meet with Tormund who is bummed that Brienne didn’t come with them. Tormund doubts this plan to take a zombie prisoner will work. But he’s ready to fight anyway. Oh and the Brotherhood without Banners is there too. They’re chillin’ in the cells. …because it’s very cold. We see that all of the characters involved here have a relationship/beef with some other characters. But they set those issues aside to fight against this grave threat. I’m tempted to write about the dynamic between these characters and how some know each other from even before the events of the books/show. But I’ll spare you that extra level of nerd research. It’s a fun scene. I’ll leave it at that.

The résumés for this group are quite impressive. As they head out into the thick snow, there are two men who have been resurrected from the dead, an anointed knight, the assumed leader of the Freefolk, a former member of the Kingsguard, a warrior priest, and a …hammer expert. They’re like the Justice League of Westeros. What a group. What an episode. Only two left this season!