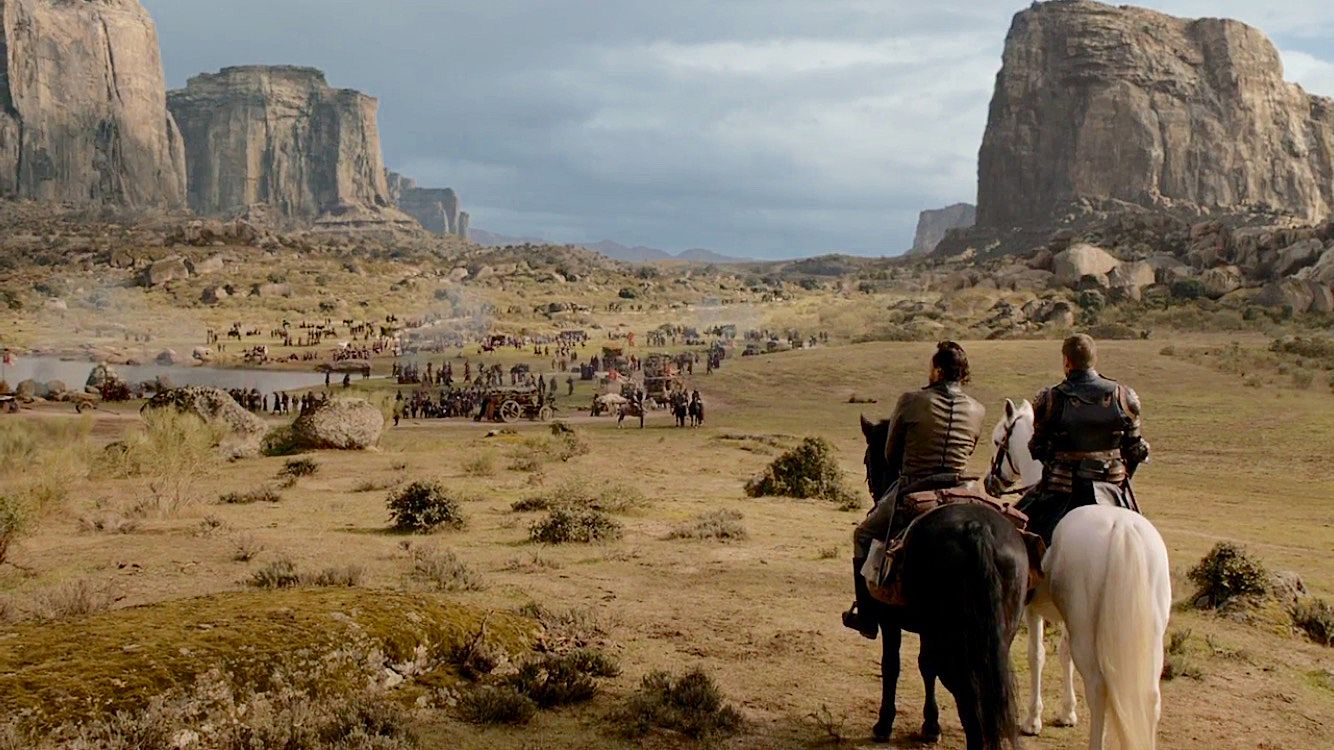 Sometimes it’s easy to forget that this expansive group of characters from Game of Thrones are occupying the same world. But as Jamie charged with a spear in hand at Daenerys, it became quite clear that season 7 is playing for keeps. In that moment, Dany likely didn’t realize this pursuer was the same dude who stabbed her father in the back. But we sure did! Here’s our recap of the midway point in Game of Thrones season 7, “The Spoils of War.”

As everyone else is fighting, Cersei continues to brood in King’s Landing. The Iron Banker, Tycho is still there too. But we see his demeanor significantly changes with the promise of getting paid back. With Cersei paying off the Crown’s debts with gold taken from the defeated Tyrells, the Lannisters and the Iron Bank are now good friends. Tycho offers to help with another loan if needed. Cersei reveals that this may be necessary. They have contacted the Golden Company, a group of sellswords from Essos, to help reinforce her army. You know, Dany has a company of sellswords in Essos too. Daario Naharis and the Second Sons. Let’s get them over to Westeros!

The scene at Winterfell is a happy yet complicated one. Bran has become one of those kids who goes off to college and returns a morose hipster. “I’m the Three-Eyed Raven. Listen to my freestyle poetry on Sound Cloud.” Little Finger gives Bran the dagger that was used in a plot to kill the newly crippled Bran back in season 1. At the time, Little Finger claimed the dagger belonged to Tyrion. But it didn’t. Baelish tries to strike up a conversation, but takes pause when Bran tells him “chaos is a ladder.” That is one of Little Finger’s lines to Varys in a pivotal scene from season 3. Bran was in the North at the time and didn’t hear the exchange. So Little Finger is intrigued. After he leaves, Meera comes in and tells Bran she is leaving to go home now that he is safe-ish. Bran, the now cold Three-Eyed Raven, gives an apathetic response. Meera is understandably offended, but it is quite clear Bran Stark and his human emotions are gone now.

After so many close calls, Arya is finally reunited with some of her family at Winterfell. But first the Beavis and Butthead of guards don’t want to let her in. After she gets by them, Sansa meets up with her sister in the crypts. We get another appearance of that awesome Ned Stark statue. Whenever HBO decides to merchandise those, count me in. Everyone needs a larger than life stone likeness of Sean Bean for his or her home. The Sansa-Arya reunion is a bit reserved. Neither of them have any idea what the other has been through since the last time they saw each other in season 1. Arya mentions her kill list, which Sansa laughs at. You know who isn’t laughing? Walder Frey and the other people Arya crossed off that list. Sansa brings Arya to see Bran, which proves to be another cold exchange. Bran brings up some more events that he shouldn’t know, but nothing too crazy. He mentions Arya’s kill list and how she changed her course from King’s Landing to Winterfell. Bran gifts his attempted murder dagger to Arya. So now she has a Valyrian steel weapon.

Brienne sees the Stark children together, but is quick to dismiss her role in the process when Podrick commends her on fulfilling her oath to Catelyn Stark. Later, Brienne and Pod are practicing with their swords. Or more accurately, Brienne is whooping on Podrick. Arya comes over and asks if she could get some practice. We see an impressive matchup with completely different styles. Arya has her Braavosi water dancing style and Brienne her traditional knight style. The skills are fun to watch for everyone except Sansa. She realizes Arya has definitely changed. “Who taught you how to do that?” asks Brienne. “No one” replies Arya. Ah, see what she did there? 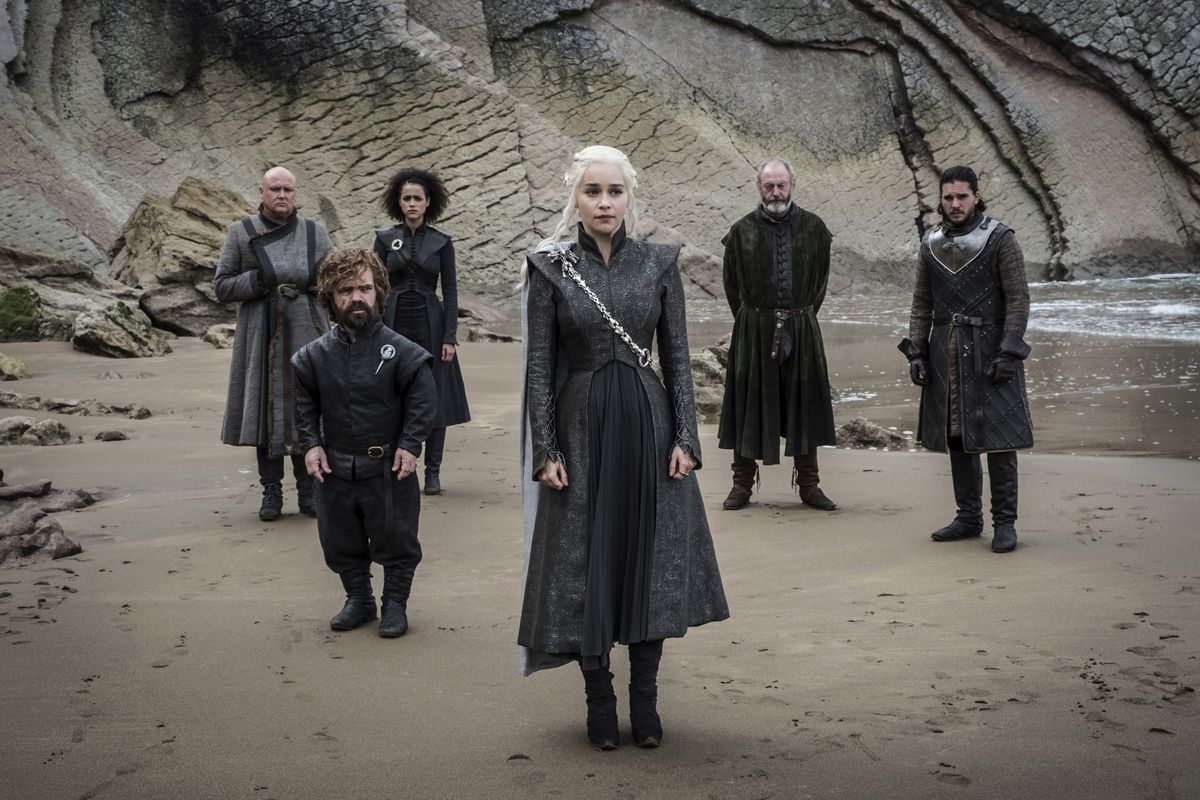 ‘Game of Thrones’- The Spoils of War (Source: HBO)

On Dragonstone, Jon is preparing to mine the dragonglass. But first he shows Daenerys carvings he found in the caves representing the Children of the Forest and First Men teaming up against the White Walkers. It appears Dany now believes the threat is real, but she still wants Jon to bend the knee before she fights with him. Wouldn’t it be funny if Jon and Davos drew those in the cave like 20 minutes ago? That’s not really Game of Thrones’ style, but that was my first thought when watching.

After they get out of the cave, Tyrion and Varys explain the minor victory and massive defeats that occurred at the end of last week’s episode. You know what really grinds Dany’s gears? Colossal military failures. She takes it out on Tyrion since these were his plans. She seems to even imply he might be doing it on purpose out of sympathy for his family. Surprisingly she turns to Jon for advice. He insists that if she attacks King’s Landing with the dragons, she will be another mad tyrant who takes control of Westeros. She has to be different to win over the people.

Later on, a lone Greyjoy ship rolls up with some of the few survivors from the naval massacre in episode two. Among them is Theon. He comes face to face with Jon. These two haven’t been together since the beginning of season 1. Jon grabs Theon and claims the only reason he isn’t going to kill him on the spot is because Theon helped Sansa escape Ramsay. This is a reunion that has been teased several times throughout the series. Theon was repeatedly counseled to seek refuge in the Night’s Watch to forgive his crimes and stupidity. But he refused, believing Jon would kill him when he arrived. Theon says he has returned to ask for Daenerys’ help in rescuing Yara. But the Queen is gone. “Where did she go?” asks Theon.

We cut to the Reach where a big line of carts is transporting resources taken from Highgarden to King’s Landing. Jamie stops the cart loaded up with gold to give a big bag to Bronn. Bronn asks for a castle, specifically Highgarden, too. But Jamie insists Bronn wouldn’t want that. As the caravan continues on somewhere between Highgarden and King’s Landing, the group consisting of Lannister and Tarly soldiers are set upon.

First we see the Dothraki horde from a long way off. Jamie tries to organize his soldiers. But when a roar rings out from a distance, it becomes clear how hopeless Jamie’s efforts are. Daenerys, on the back of Drogon, begins roasting soldiers and all of the wagons, chariots, and carts in the caravan. We finally get to see the Dothraki in open battle and their mastery on horseback. They’re mowing down opponents. Dothraki archers jump to standing positions on the backs of their horses to shoot opponents while still maintaining the charge. It looks like a one-sided massacre. But then Jamie sends Bronn to use the giant crossbow, the scorpion, built by Qyburn to bring down the dragon. Eventually Bronn does hit it, but Drogon survives. He destroys the scorpion just as Bronn jumps out of the way. Daenerys lands Drogon and struggles to remove the bolt stuck in him. Jamie sees her from across the field and charges with spear in hand. If he is successful, the war is over. Tyrion watches on from a distance. Dany sees Jamie coming. But so does Drogon! He opens his mouth wide, the flame building in his throat. Jamie braces for death. Right at the last second, Bronn leaps from his horse and knocks Jamie into the adjacent water. Saved from the flame, we see Jamie slowly sink under the weight of his armor.

At this point I’m not sure why other shows even exist. This was yet another Game of Thrones battle like none we’ve ever seen before. Just when you think it can’t get more intense (like a charging Dothraki horde), they always go one step further (like a dragon flying over the horizon). I can’t imagine what will happen in the next episode. Bran can, but he’ll be unnecessarily vague about it.

Best Comic I Read This Past Week: Paper Girls Volume 3

Why ‘Pokemon Moon’ Didn’t Match up to My Expectations