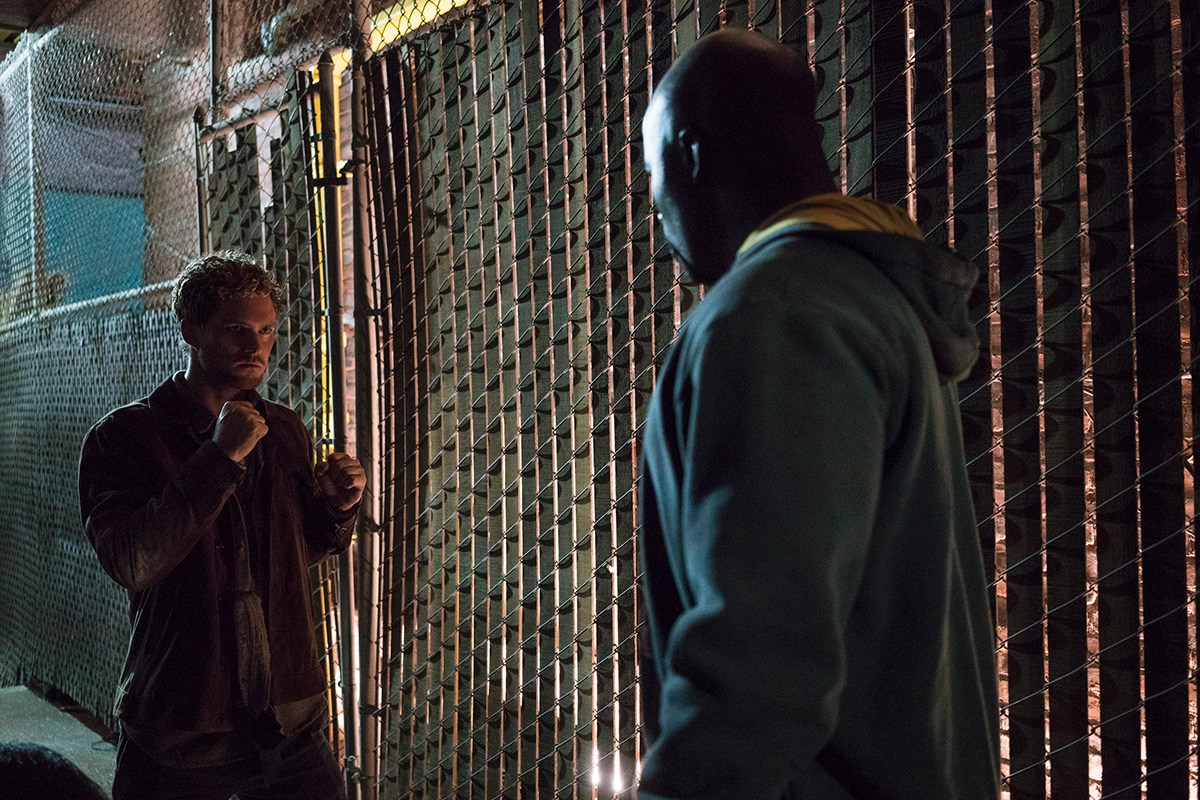 The premiere episode of The Defenders had everything you would expect from our four super-powered (don’t call them) heroes. Luke Cage stood up for his neighborhood. Jessica Jones dove into a mysterious disappearance. Daredevil wrestled with his two lives. And Iron Fist… wasn’t sure what to do and complained about the Hand. Episode 2 developed all of that a bit more, but now we’re dealing with the aftermath of the huge earthquake. They haven’t become The Defenders yet, but we’re getting closer. So let’s continue our slow roll recap of the series with episode 2, “Mean Right Hook.”

Matt is having a hard time after the earthquake orchestrated by the Hand. He heads out on the roof and can hear people in the distance injured and scared. There’s also some crime going down. He keeps tilting his head from side to side like my dog does when I’m eating a sandwich. I guess that means he’s listening. He’s forced into action when an electronics store owner pulls a gun on some teenagers stealing from him. Matt jumps in, out of costume, to protect the criminals from being shot over a television. Back in his apartment, he unlocks the trunk with his Daredevil suit, but gets a call from Foggy before he can put it on. They meet up at Josie’s, their old dive bar hangout. They weren’t on the best terms at the end of Daredevil season 2, but this is a pretty nice conversation. Well it’s nice until Foggy brings up Matt’s vigilante alter-ego. He offers Matt a bunch of case files he’s too busy to work on over at the big Hogarth-led law firm. He figured he could outsource them to Matt in order to keep him busy and away from the dangerous crime fighting.

Luke Cage isn’t that busy today. He’s just helping with the clean up effort in Harlem by lifting up heavy things. He tells Claire he’s going to hit up some bars to try to see what the local riff-raff knows about the boys turning up dead in the area. He finds one criminal he’s well acquainted with, Turk, who we met several times in Luke Cage season 1. Turk says that Mariah and Shades have gone dark and don’t seem to be involved in anything at the moment. He’s heard about the case Luke’s looking into though. The person recruiting the young men is a new guy called White Hat, who wears a white suit and hat. Luke finds him exactly where Turk tells him to look. He’s sending his recruits out on a job. Luke calls Misty, but holds off telling her where this is going down because he sees Cole there too. Cole was the guy whose brother and sister recently died. So Luke is trying to get him out alive. It’s the Luke Cage- “Saving Private Ryan” subplot. Luke decides to follow him instead of break it all up immediately.

Over in Colleen’s dojo, Danny is brooding over some classic iPod jams. I always imagine it’s music that hasn’t aged all that well. Dreaming about killing the Hand while “The Thong Song” gets him pumped up. Colleen points out that the sewer man who died last week was an ally and there are others who can help them fight the Hand. Danny is being a loner about it all. He mocks the idea of joining a team. Colleen apparently recognized the rare type of sword that sewer man had. She figures they should look into a local workshop that is a world leader in making those rare swords. How come my hobbies never lead to detective breakthroughs like that? (That’s a Game of Thrones collector’s edition blu-ray. We should check out the local Best Buy.) When they arrive at the sword workshop, everyone there is dead. It seems they went out fighting. Hanging there is a map of K’un-Lun. Hmm, very intriguing. Danny and Colleen hide when they hear people coming. It’s the guys from Harlem. They’re working as a clean-up crew melting the bodies with acid or something. Danny and Colleen beat them up. But they’re not much of a fight. Danny chases one outside. It’s Cole! But right then Luke steps in to defend him. Luke proceeds to pound on Danny in a fairly one-sided affair. Danny is able to redirect some of Luke’s punches, but Luke is definitely winning. Until…. IRON FIST! Danny connects with the “mean right hook” from the title of the episode and sends Luke flying across the alley. Luke, Danny and Colleen flee as the cops show up. Cole is arrested, but that may be a good thing. Well until the Hand find out. Then it’s probably a bad thing.

Speaking of the Hand, Alexandra is getting a private concert of some classical music. She compares Beethoven and Brahms, which surely is some kind of metaphor for the overall plot. But I’m more of a classic iPod kind of guy. So we’ll move on from the Beethoven references. Madame Gao turns up to tell Alexandra that their plans have been halted due to some type of magic wall that they are unable to tear down. Alexandra thinks it could be a door. Now they need to find the key. Later, Alexandra has a prisoner. It’s Daredevil’s old pal and mentor, Stick.

In the world of Jessica Jones, Trish is on her radio show talking about the earthquake. One supposed expert calls in pointing out that it didn’t act like a normal earthquake. But the call is cut off when the big wigs upstairs tell the producer to curb the earthquake chat. Jessica was in that apartment with all the explosives when the earthquake hit last episode. Now Misty and the police are there after Jessica called it in. On her way out, Jessica steals some evidence. Of course she’s not giving up on this case. Looking through old records, she’s having a hard time learning anything about the company she’s investigating because they’re covering their tracks well. Jeri Hogarth turns up and tells Jessica she needs to back off the case. The government is now heavily involved due to the ridiculous amount of explosives found in the missing guy’s apartment. Jessica uses her keen detective skills to connect the dots. Hogarth doesn’t want Jessica doing anything that would reflect negatively on Hogarth’s firm, Jessica’s former employer. Hogarth later passes the task of keeping an eye on Jessica to Foggy.

When Jessica returns to her apartment, John Raymond, the missing guy she had been investigating, is there. He has Malcolm at gun point. He wonders if Jessica is with “them.” We can safely assume the dangerous pursuers he is referring to are the Hand. John says they were going to “take down the city” and he was trying to stop them. Elektra shows up and is about to kill John. He beats her to the punch and takes his own life. Jessica tries to stop Elektra, but is easily kicked aside. Jessica tries to chase her out of the building, but has no luck finding her. When she gets outside, Misty is there to arrest her for stealing evidence at the bomb apartment crime scene. Oh and now she has a dead body in her apartment too.

After some interrogation room banter, Jessica begins to tell Misty that this case is a weird one. Then the door opens. “My name is Matthew Murdock. I’m your attorney.” We’re starting to get some Defenders team-ups here in episode 2. Luke fighting Danny. Matt defending Jessica. It’s all coming together. Now let’s just get some bad guy ninjas for them to beat up!