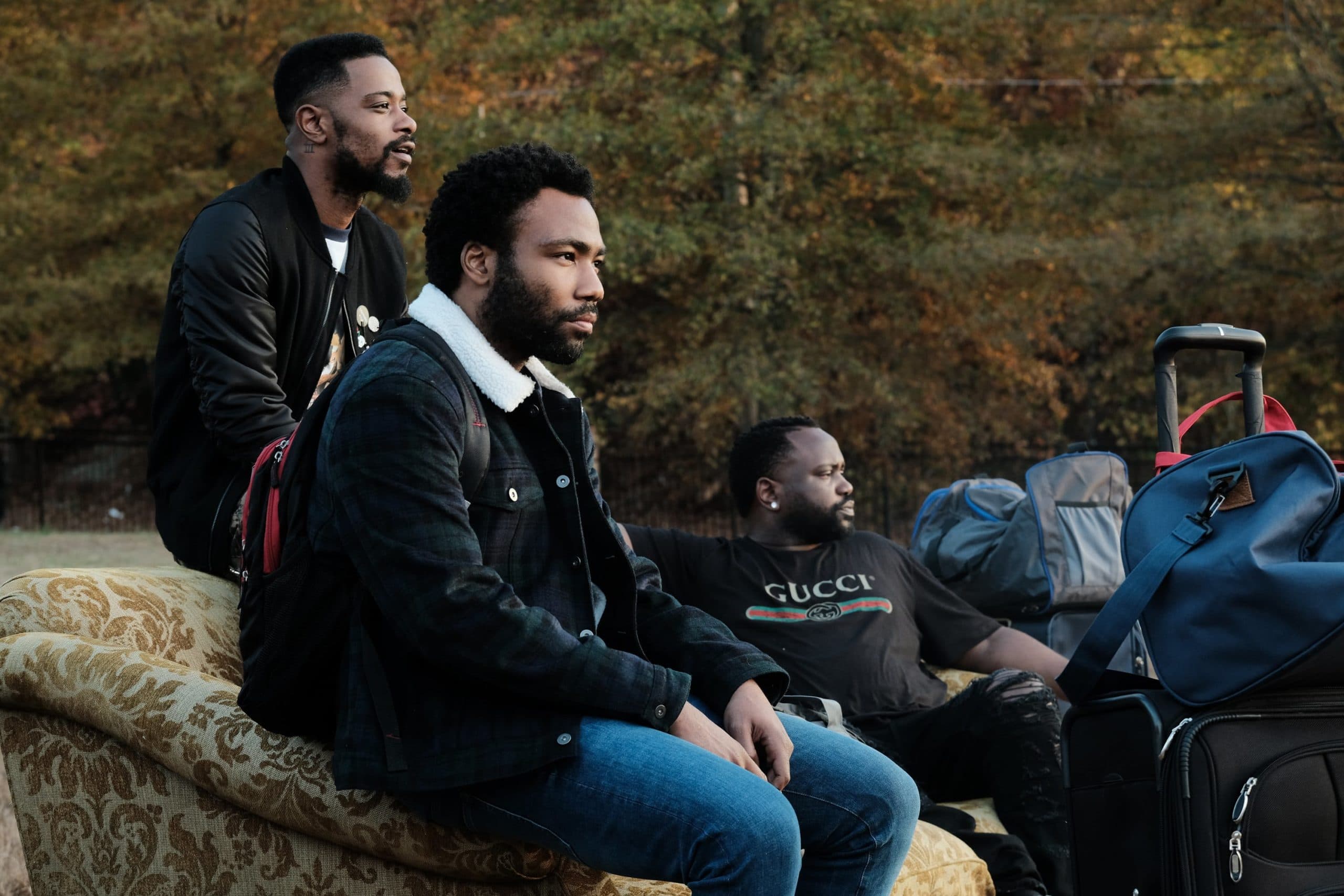 Often, human beings describe a feeling of deep, kneading anxiety in their chests.  Sometimes it can feel like shattering bones, car crashes, or gunpoint robbery. As if your nerves, all on high alert, skidded to halt as soon as they raced off faster than light. The beam of dread seeps through you. This is what “Crabs in a Barrel” feels like. Earn’s journey comprises a series of hurdles, seemingly fruitless in the face of racism and class struggles.  All he needs to do is get Alfred on a plane to Europe.

“Crabs in a Barrel” is not so much like the episodes before it. It is straightforward AND brutally cold. With pounding chests, the audience follows Earn from parent-teacher conference, to moving van, to the red-eye Europe flight with Paper Boi and Clark County.  More importantly, this episode proves that Earn is capable of not robbing himself of what he deserves. Finally, he manages to bail himself out with swagger.

The episode opens with Earn and Lottie taking a Lyft to a meeting with Paper Boi. The driver refuses to use the GPS, preoccupied with her god-praising and gospel-singing, as Earn tries his polite best to push her to drive faster. “Sorry I’m late, my Lyft driver was…religious,” Earn says as he arrives to the meeting. The meeting, with a potential entertainment lawyer for Paper Boi, turns out to be a bust.

A shot of Lottie wearing headphones as a song’s “nah nah nah-nah nah nah” gibberish plays symbolizes it perfectly. Al doesn’t care that this guy represents F-list rappers and low level reality TV stars. He urges that next time he wants to see a “Jewish dude.” He wants to level up, and after his European tour (with Clark County) things will be different. Earn comments to Al, “you should be headlining that tour.” Al agrees, they split, and Earn goes to pick up a moving truck. Again though, Earn’s management is called into question.

I love Earn’s relationship with Lottie throughout the episode. He’s incredibly caring and thoughtful towards her, and the young girl’s acting is compelling. The movers arrive as Earn drops off the truck, seemingly incompetent (Earn catches them drinking before the job). Al found Willy’s golden gun, from “Alligator Man,” and makes Earn take care of it. As if Earn’s day couldn’t get busier, Darius’s passport is expired. Just another thing to do before they catch an international flight. No stress right? There’s nothing to freak out about at all. He stashes Willy’s gun in his bag. Enter Lottie’s preschool teacher. 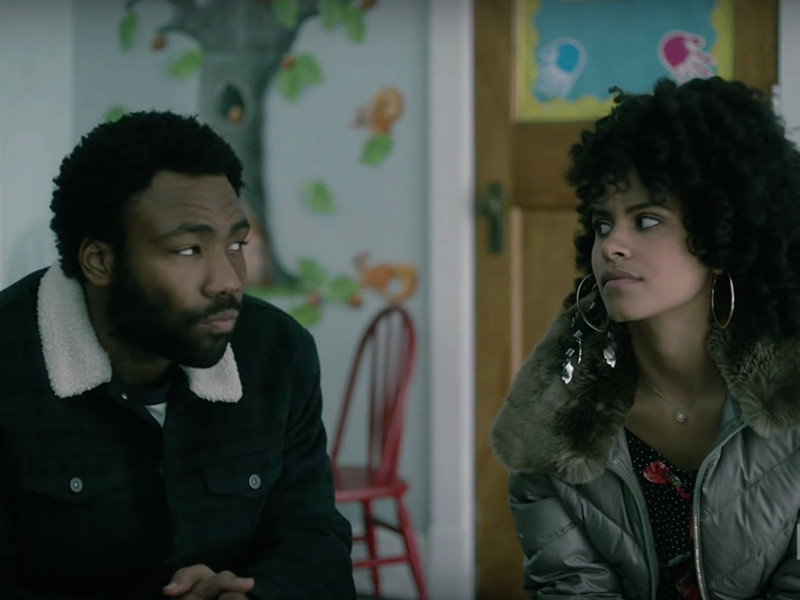 The teacher, almost as aloof as little Lottie, discusses with Earn and Van (looking radiant and obviously doing better since “Champagne Papi“) the advanced learning capabilities of their daughter. Relieved, the conversation moves forward as the teacher suggests to the parents that Lottie go to private school. “This school is awful,” she deadpans to Earn and Van, basically threatening that Lottie’s intelligence will be compromised if she remains in her current school.

“Is there something we could do for Lottie that, um, would be…cheaper?” Earn questions, delivered in wonderful fashion by Glover. The teacher bitingly remarks they should raise Lottie in a two parent household. Van asks, “would you have told us the school was bad if she were a regular student?” To which teacher replies, “No. If I see a steer smart enough to get out of the pen, I leave the gate open.” Utterly chilling. This lady literally referred to these children as if they were in a slaughterhouse.

Outside, in the parking lot, they discuss the ups and downs of private vs. public schools and Earn’s ensuing absence for Paper Boi’s tour. Van admires Earn’s intelligence, and he does the same to her, happy that Lottie turned out so well in their less than desirable situation. She comments on his black eye (from “North of the Border“) to which he ineffectively shrugs off. Van doesn’t dwell much, leaves him with a goodbye and a “have fun.” It’s great to see she’s made peace with things with Earn, at least somewhat. 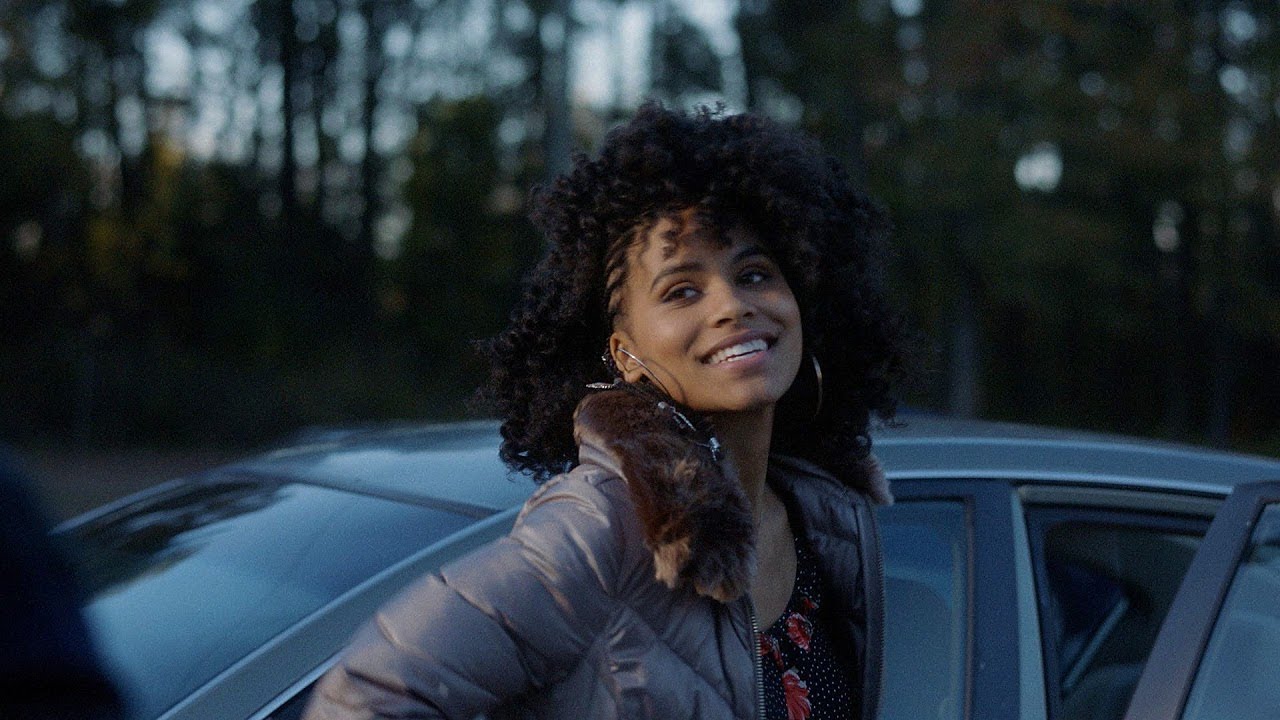 Back at Al’s, Earn rounds up the moving crew to keep working with an extra cash bribe. He grabs Darius and they head to the passport renewal place. Darius discusses the politics of peeing over your boxers, or through your zipper and how things change when he’s wearing a suit. Earn is clearly more upset than at the beginning of the episode, worried that Al will fire him, complacently listening as Darius talks through him. Also worth noting you can see Darius wearing a Benny Hope shirt, a nice nod to “Teddy Perkins.”

One of the clerks at the passport center talks with Earn and Darius about their rap aspirations. To Earn’s glee, Darius’s passport will only take two hours to renew. Additionally, the clerk drops that his uncle has great connections as an entertainment lawyer. Seemingly, another piece of manager ammo falls in Earn’s lap. He asks the clerk, “be honest. Do you think there’s a black lawyer who’s as good as your cousin?” The clerk affirms there are great black lawyers, but the connections a white, Jewish lawyer has are greater for “systemic reasons.” A text from Van flashes. She says she may move back into her mom’s with Lottie. Earn does not take it well. “Is Al gonna fire me?” Darius doesn’t know. “I know you’re always at peace with everything but my whole world’s falling apart,” Earn utters. Darius gives his best affirmations to Earn, telling him that “learning requires failure. Al just trying to make sure you ain’t failing his life.” Being that they are both black, Earn and Alfred both cannot afford to fail in a world which offers them zero handouts or worse. “Do Nigerians get a chance to fail?” Earn asks. Darius replies, “Don’t you start that. Nigerians don’t fail.”

The couch from Season 1 makes a triumphant return, bringing feelings of great glee. The joy and warmth of season 1 have been missed with all the cold chaos of Robbin’ Season.  As Al lounges and smokes a blunt, Earn wants to talk about what’s going on. “We’ll talk when we land,” Al replies. The guys playfully push Earn to smoke weed, trying to break past his frustrated, anxious demeanor.

At the airport, tensions get high. Clark County’s manager tells Al, in front of Earn, that he’s got an entertainment lawyer lined up for him. Earn, annoyed, corrals them all towards the TSA check in. In perhaps the season’s most breath-taking, jaw-dropping, “what”-uttering moments, Earn finds the forgotten golden gun in his backpack. The look Glover emotes on his face is harrowing, calculating, almost lifeless. As if he couldn’t screw up enough, now he’s brought a gun in the airport.

Miraculously, Earn manages to escape TSA without anyone discovering he had the gun. As they wait on the plane, Al finally opens up to Earn. He saw Earn ditch the gun, stunningly, at TSA. “Just know that’s exactly what I’m talking about,” Al says. “You my family, Earn.  You’re the only one that knows what I’m about. You give a fuck. I need that. All right?”  Just like that, Earn is back in Al’s good graces.

Do You Love Me?

Clark County arrives a bit after them, and it’s revealed that Luke, his manager, had a gun in his bag and took the fall for Clark (though it’s more likely the demonic Clark threw him under the bus). Earn then tells Al he put the golden gun in Clark County’s luggage. Willy’s advice from “Alligator Man” comes to mind. Early on, when handing Earn the golden gun, he tells him he’ll need it in the rap game. Assuredly, it did save him and perhaps help Al move into the upper echelon. How comfortable Al is with that move is unclear.

Nina Simone’s “I Shall Be Released” plays out the final minutes of the episode as the plane takes off. Back at Al’s old place, Tracy fruitlessly bangs on the door to be let in. Seems no one told him he could play security in Europe, a silent power move by Earn probably. A closing shot of the sacred couch is shown. Credits roll.

I can’t help but feel a little empty. Atlanta has been a crutch for me the last two months.  It’s been a joy writing and thinking about it as each episode has been its own special surprise. It’s what makes “Crabs in a Barrel” so unique in comparison to all of Robbin’ Season. It has the most linear plot so far and brings all four main characters together for apt closure. While it remains unclear if we’ll get a season three yet, “Crabs in a Barrel” deftly tied together all the loose ends, while throwing in plenty of references from Season 1 and 2.

Earn has concretely secured his manager position and Van is moving on. Al is set to become a huge touring rap act. This could be the end of the series, even, with how tightly kept the script was. Robbin’ Season felt so lonely and dangerous, almost despondent.  Separating the characters into solo episodes really helped to harness this effect. It’s clear that Earn and Alfred are more powerful when in sync with each other. 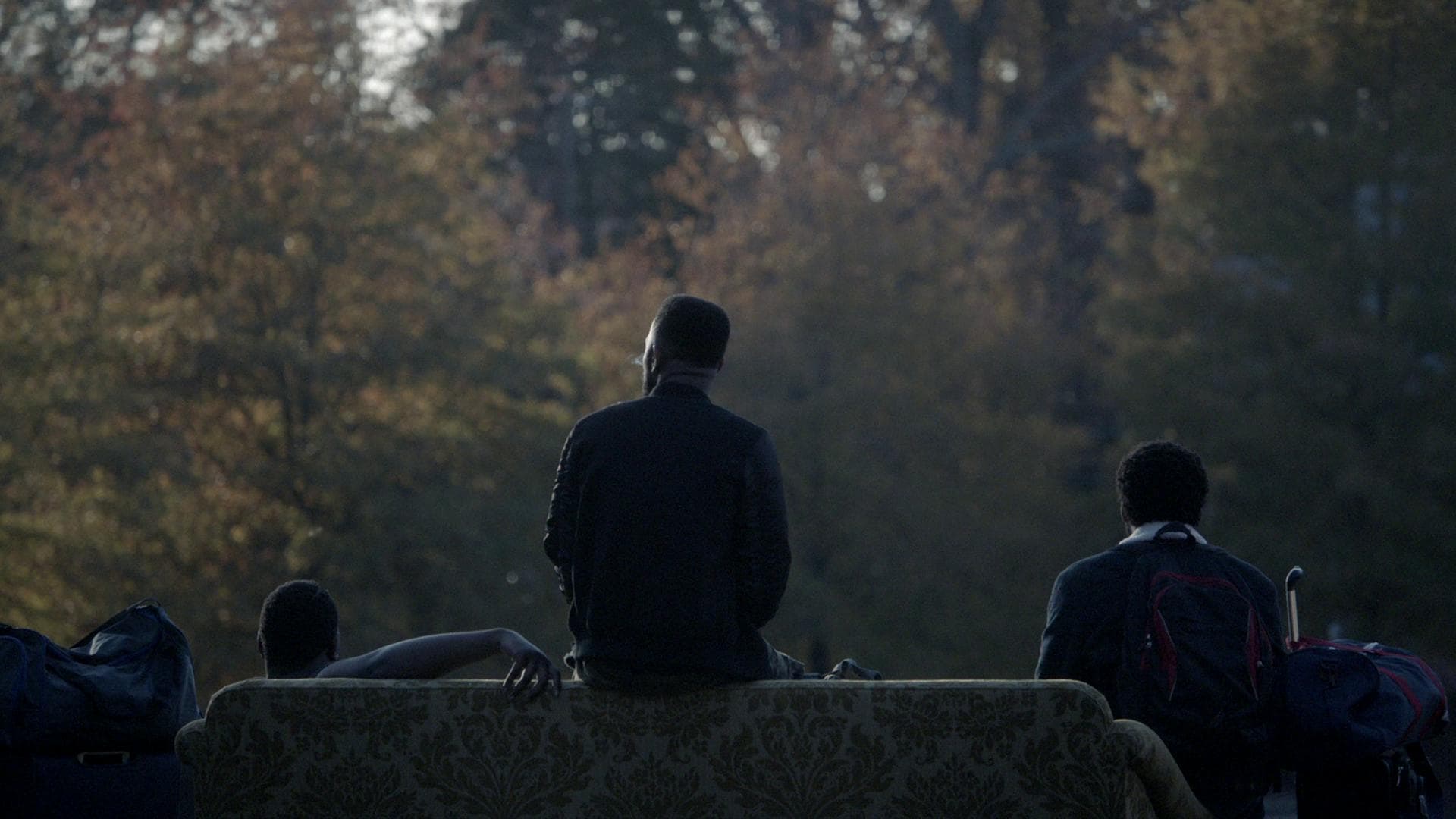 Robbin’ Season proves itself as the finest piece of scripted television to come out in the last decade (read: of all time). This is activist television, this is genre-pushing. It is setting the way for changing how we view fresh, original script writing. Just like when Benny fires off the shotgun to kill Teddy, then himself, so goes the gun violence in America. The unexplainable rage of the world. Toxic masculinity. The confounding, inherent racism of America. Atlanta provides a haven for inspiration, creativity, and commentary. While the experience may have been scary, enlightening, and humbling for viewers and characters alike, we can all agree on one thing. Earn seriously kicked ass in “Crabs in a Barrel.”  Audiences will be talking about the impact of Robbin’ Season for years to come.

Atlanta airs on FX Networks. The show stars Donald Glover, Zazie Beetz, Brian Tyree Henry and Lakeith Stanfield. Check out our past recaps here, and stay tuned for any and all upcoming news for the future of Atlanta!