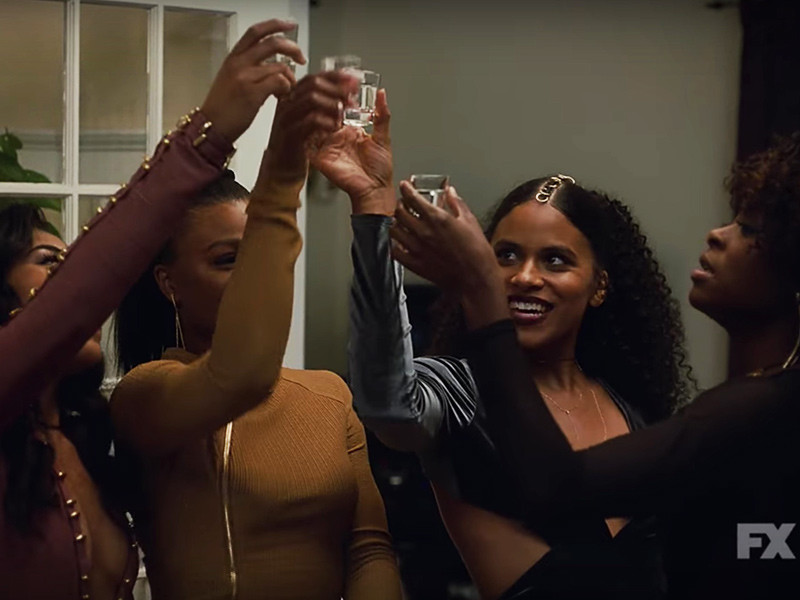 The episode starts with Van’s friend Candice (Adriyan Rae) hosting an Instagram live feed as she promotes products and poses for the camera. Candice brings Van into frame, who consequently glares at the smartphone. Van is preparing to go out for the night with her friends. Tammi (Danielle Deadwyler) does lines off the coffee table, while Nadine (Gail Bean) and Van discuss IUDs and birth control. Nadine reveals they’re heading to Drake’s party at his Atlanta-located mansion for a New Year’s Eve bash.

While Van’s friends chatter about chasing Aubrey, she scans her Instagram feed. She stops to watch a video of Earn with a woman fawning over him. He’s seemed to move on since the ping pong match in “Helen” and Van plans to do the same. “I need a photo with Drake, my Instagram is weak as fuck,” Van says. Her feed is all pictures of her daughter Lottie, chicken, and lone posts of Earn. “Delete the Earn,” Candice replies. “And replace the Earn with Drake,” Nadine adds. They take shots and depart for their adventure. Jlin’s phenomenal “Never Created, Never Destroyed” chimes out.

As the girls seek out the shuttle to take them to Drake’s, a pizza delivery guy pushes a pizza. “This pizza needs to go inside him,” says the delivery dude referring to Drake. They reach an unmarked shuttle, Candice recites a numbered passcode and they hop in. Inside, blue light surrounds them while the sounds of a crying woman is heard among the bus’s static noise. “I’m just so happy,” the crying woman sobs. If ever there was a public figure to cry over meeting, it would certainly be Drake.

Do It for the Gram

Social media, Instagram specifically, is ever-present this episode. Its facades and falsities are put in the forefront.  Further, the lengths to which people go to look “cool” or “accomplished” through a phone camera is disheartening to say the least. Millennials, if you feel me, please stand up. Van and friends are all fixated on identity, as they should be. Being four powerful, beautiful black women, the world has surely not been kind to them. A picture with Drake is well worth the effort to spruce up their online timelines. At the very least, it provides a moment of respite from the pain of the everyday. Van being a mother, it’s likely even more difficult to escape the pigeonholes of “the single mom” or “Earn’s girl.” This seemingly special event with Drake would fulfill a momentary emptiness, but is still ultimately an unsatisfying simulation.

The girls enter Drake’s mansion as lines are drawn. They meet DJ, Candice’s boo (or one of them), who gives them all a weed gummy. Nadine is made to loosen up for the party and Van is pushy about meeting Drake. Tammi notices a presumed Hollywood actor, Devyon Johnson (Brandon Hirsch), with a white girlfriend (Melissa Saint-Amand) on his arm. Upset by this, Tammi calls Devyon “cliche” from afar, but continues to fixate on him throughout the night.

Nadine’s edible kicks in to the tune of Vince Staples’s “SAMO.” “I feel weird,” Nadine says, as a woman rides a bucking bull machine in the same room. It’s truly lit. Low lights, folks dancing and swigging drinks. Nadine, freaking from the weed gummy, calls 911. Van saves her, placing her in a chair beside a giant portrait of Drake holding an owl. She leaves Nadine there to rest, and runs into Brandon (Jordane Christie). He starts off friendly and inviting but quickly changes into a pushy, overly-helpful creeper. Luckily, once Van finds the bathroom, he goes off to find some food for them, which allows Van to delve further into the house to find Drake. Brandon disappears the rest of the episode, which is welcome.

The runoff from last week’s “Teddy Perkins” purposely plays with the audience in “Champagne Papi.” There are several creepy turns the episode could take this time around. The shuttle driver’s strange flirtatious kidnapping joke and Brandon’s lingering both give off ominous feelings. The writers skirted these expectations as the “woman’s night out” trope usually leads to terror and male violence.

Van finds herself in a grand, ornate bathroom somewhere on the estate. After charging her phone, she shuffles to the next room and discovers Drake’s personal closet. In one of the more whimsical moments of the episode, the camera watches as Van dances and sings while trying on Drake’s jacket. A mystical piano rendition of “Passionfruit” plays quietly. Here we see the purity of Van’s soul, attractive and graceful. She craves love and self-love, hence oozing charm and passion.

Nadine sits outside by the pool, Kelela’s “Jupiter” serenading in the background. The rippling water surrounds her as she seemingly asks to no one, “is this real?” Who better to respond than the voice of Darius? “No. No, it is not,” Darius replies. “Have you heard of Bostrom’s simulation argument?” He explains that if a simulation were to be as developed as the reality humans currently live in, it would be indistinguishable from that reality. “You’re a simulation,” he responds, “like a Sim.”

They share an apple and Nadine asks if he can help her stop thinking. “Is she real?” Nadine says towards the woman dancing in the sequestered circle pool behind them. Darius responds, “real fake.” This scene’s cinematography mixed with Kelela’s beautiful music really creates the classic, dreaminess of Atlanta. “I knew it,” Nadine murmurs. (Refer to Jean Baudrillard’s Simulacra and Simulation for more information on theories of simulation.)

The arguments make it transparent that the white woman’s privilege is evident in her relationship with a black man, here Devyon. Tammi says, “don’t even act like you don’t know what’s going on out here. You got all the advantages in the world.” Really, the quote says it all. Tammy’s frustrated rage is correct, and the damages of white privilege and white supremacy are evident across the landscape of the United States. She continues, “No. No. Type ‘beautiful woman’ in Google Images, honey. Then you can talk to me.” Devyon arrives at the end of the conversation. His self-aware “sorry” makes it evident this predicament has happened before.

Now lost, Van enters a darkened room where a man is prattling in Spanish. He’s fiddling with a TV remote, clearly annoyed by the screen’s mocking static. The older gentleman is revealed to be Drake’s abuelo. Van asks for his assistance finding Drake, to which he responds by pointing to a soccer calendar. Scrawled in marker across the calendar are the words “Euro Tour.” “Hold up,” Van utters perturbed, “Drake’s not here?”

Heading downstairs to alert Tammi and Nadine of the horrible news, Van passes a line of eagerly waiting ladies. She discovers the line is for a room of Drake photo cut-outs where you can pay $20 dollars to get a selfie with a fake Drake. “10,000 followers, guaranteed,” promises one of the promoters. Do it for the gram! Van throws a vexed look, and goes out to the pool. She discovers Darius with Nadine.

Drake Was Never There

Darius affirms he knows Drake’s chef Guillermo “from the glorious days of pick-up soccer.” Classic. Van tells Nadine that Candice ditched them for T-Pain’s party. Nadine replies, “that sucks. Me and Darius figured out that I am nothing. We’re all nothing. It’s a simulation, Van. We’re all fake.” Van gazes at her. “You’re right. There’s no Drake.  So don’t ruin your high and just enjoy yourself.” Nadine embraces Van and calls her “a good friend” as Tammi announces they’re being kicked out.

In the wee hours of the morning, the ladies and Darius walk down the side of the road. Likely contemplating the simulated evening of meaninglessness, Van’s eyes go wide as she speaks the episode’s true purpose: “Drake’s Mexican.” Speculation of Drake’s ethnicity aside, Fuego’s remix of “Hotline Bling” plays as the episode closes.

Didn’t It Make You Better?

“Champagne Papi” is a welcome comedown from last week’s episode. “Teddy Perkins” was a tale of fallen heroes, whereas “Champagne” gave the spotlight to black women. Drake was a MacGuffin for the episode, a red herring of sorts. Tammi, Candice, Nadine, and Van assuredly dominated the major episode progression. Instead of focusing on “Your’s Truly the Boy,” this week’s episode decided to give a much-needed focalization to the black women of Atlanta. Their collective struggle to invigorate their Instagram is all too familiar. Not only that, but their daily struggle just being black women in a white man’s world is one to be respected and taken seriously.

More importantly we get a deeper glimpse into Van’s duplicity. Simultaneously relatable and frustrating, her need to be more than a baby mama is compelling enough. What’s frustrating is that she, like many people her age, is looking for the wrong thing. So often in 2018, distractions distort our reality. What we need is often staring us right in the face, patiently waiting for our eyes to open. Perhaps the best lesson from “Champagne Papi” is that self-love is only found in one place: yourself.