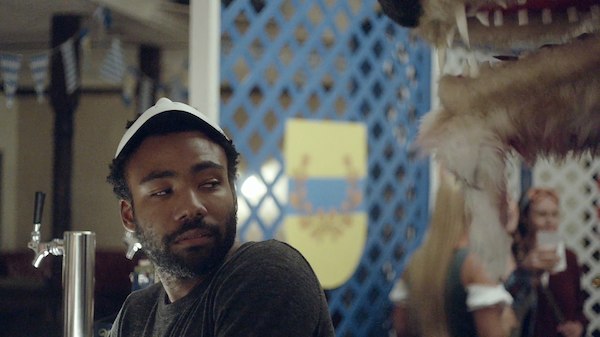 Episode four of Atlanta is markedly weirder than those before it. If you thought season one had plenty of bizarre, surreal imagery, season two, especially last Thursday’s “Helen,” promises a departure into dreamlike territory. Think Raymond Roussel’s Locus Solus and Andre Breton’s Manifesto of Surrealism. Back when Donald Glover and company were promoting the show, he would describe Atlanta as “Twin Peaks with black people.” However, it was in “Helen” where I really started to feel like it was switching from Lynchian momentum to nearly Kubrickian tone. Atlanta grows immensely denser, lusher, and more layered. “Helen” finds Earn and Van on a trip to Helen, Georgia, a town about 90 miles from Atlanta. Formerly a logging town, Helen was in a steep decline until adopting a Bavarian alpine style aesthetic, but in the Appalachians instead of the Alps. Helen feels and looks very German. This is made even more apparent by a 1969 zoning law that made franchise-owned businesses adopt the Bavarian-style. It’s very tourist-y. Enter Van and Earn, on a seemingly romantic getaway, free from the burden of child care. 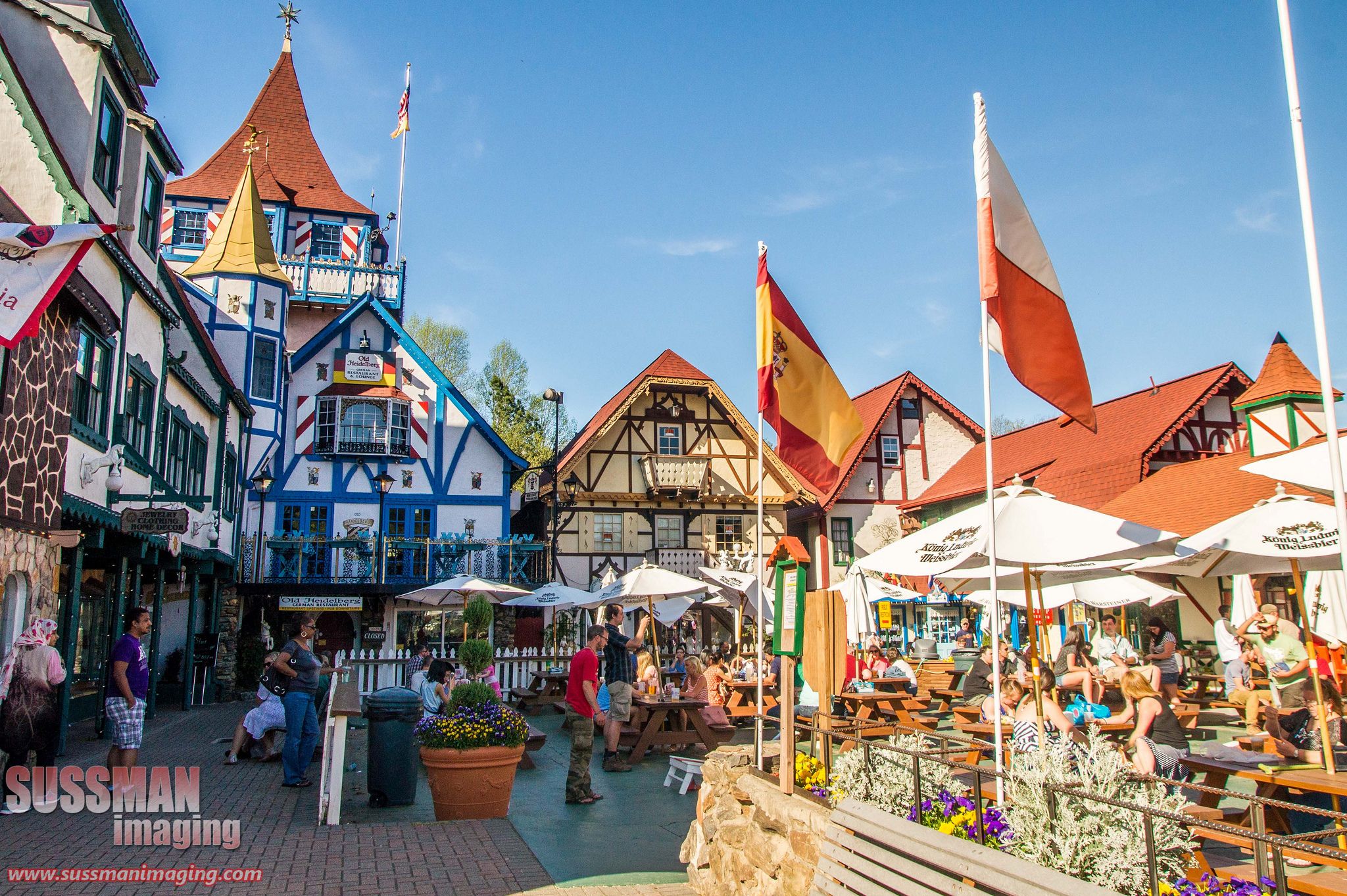 The episode’s opening shot is Earn going down on Vanessa, while the camera shows scattered children’s toys and clothing around the room. As they drive to Helen, Earn and Van discuss paranoia and “high questions” like Van’s line, “are black women considered brunettes?” Following the question, Van gasps as Earn brakes for a huge hog hanging out in the middle of the road. Van remarks, “is it weird that that made me hungry?” Earn replies, “me too.” When they pull up to Old Heidelberg German Restaurant in Helen, he asks if they’ll be the only black people there. Van coaches Earn on ways to win the dance competition, talks his “weird swag,” and mentions the racist Moor character that white people show up as. Perhaps one of the funniest moments of the episode occurs concerning the latter. A white dance-goer mistakes Earn for the Moor caricature only to find that he is actually black.

In this episode, we see the n-word spouting white radio broadcaster Dave from season one’s premiere episode “The Big Bang.” He’s here with Vanessa’s childhood friend Christina as her date/boyfriend. Dave offers Earn a mask and says, “you’d look good in it” (Earn is the only person dressed in plainclothes). A Schnappviecher roams around emitting a low cackle, as Earn stares at its creepiness. Terms like Schnappviecher, Fastnacht, and other German holiday/celebration buzzwords abound in this episode. We learn that Van is half-German and also fluent in German. With an added layer of nuance, Van’s character flourishes more. Her different qualities will soon test Earn, inciting drama between the two.

A schnappviecher, much like the one appearing in the episode.

With Helen’s obscure backdrop, Earn and Van are clearly not in Atlanta anymore. Earn doesn’t like to dance and all Van wants is for Earn to have fun with her. She wants him to do things that she likes with her, because she does things that support Earn. Throughout the show’s duration, Van and Earn exude an on-again-off-again trope. As they playfully compete for champion of the ping pong table, the embers of a fight start to smolder. Earn’s stubbornness to play nice and active disdain for the Oktoberfest festivities has Van questioning if their relationship isn’t skidding to a halt (again). Earn is uncomfortable in this unusual setting, and not very adaptive. Their relationship identities are on the line. Both are figuring out where they stand within their version of love. Earn and Van (Zazie Beetz) argue over ping pong. It’s deeper than that.

Quietly exasperated, Earn asks, “why’d you do that?” in response to Van’s bold ping pong victory. Angry, Earn adds, “When we play basketball, I don’t destroy you in front of everybody.” “There’s nobody here. They’re all dancing,” Van replies. The camera shows a shocking, shrunken, and baby-faced masked person that’s been watching Earn and Van the whole time. I take it as a commentary on the voyeuristic gaze of TV-viewers in the age of social media. Even fictional characters are never alone. Atlanta manages to break the fourth wall without literally implementing the technique. There are many shots of masks worn by the partygoers throughout, giving off an Eyes Wide Shut-esque sensibility. It’s worth nothing that the cinematography in this episode is the best I’ve seen so far this season.  Van storms back to the party, upset with Earn’s standoff-ish behavior.

Following the ping pong debacle, Van discusses her Earn problem with Christina, the only other person of color at the German party. Two of Christina’s white friends walk up, and she introduces Van as “Lottie’s mom.” To be debased by a friend to the status of a “stay at home mom” in the company of complete strangers, rather than expand on her true identity is bottom line offensive. Christina resorts Van’s status to her choices, “to choose black” (Earn) instead of white, and basically says she got what she asked for. A pretty brutal thing to hear from a “friend.” With a lot to unpack in this scene, it is well worth subsequent watchings. Their conversation ends abruptly, as Dave runs over to get a picture to document his recent victory. Van realizes she’s been “Schnapped” when she can’t find her phone to take a picture for Christina and Dave.

While walking in a small parade, lanterns surrounding her, Van discusses with the bartender from earlier in the episode, in German, her relationship with Earn. The man asserts, “You should start a relationship with yourself, if you really want to learn to love someone.” Which is absolutely sound advice. Van asks back, “Do you believe that love can die?” I love these moments in this episode. I always wished season one had more Van in it. Zazie Beetz is just too damn good not to be on camera more. As she steps off to pee in an alley, she is startled by the Schnappviecher and knocks him out. She finds her phone, with a lone text message from Earn: “we should talk.”

Earn is back by the ping pong table. Van asks, “what do you want? In our relationship? No bullshit.” She wants “to be in a committed relationship where I’m valued as a human being and not as an accessory that you can fuck.” Earn replies, “that’s a good answer…I don’t know what I want. I know this arrangement works for me.” Van is tired of having the same conversation, and Earn will not fully commit. Earn doesn’t want to waste anymore of her time. Van says, “Let’s settle it.” They play another ping pong match, with the stakes set high. That Earn only sees Van when he’s picking up or dropping off their daughter, Lottie. Van hits a couple smashes. The audience watches the match unfold as Harry Belafonte’s “My Angel” queues in.

The Wrong Side of a Door

As they sleep, Earn and Van are shown top down, not in each others arms. They lay separate. “My Angel” continues to play. On the car ride home, Earn lights a spliff to share but Van rejects it. Once they return home, Van says goodbye, closing the door in Earn’s face. Here, like so many instances before, Earn is left out to dry. I finally get the gist that he is kind of a loser. As soon as he reaches a good point with Van, where things seem solid and he’s even the major breadwinner (it’s hinted that Paper Boi is helping pay the bills), the man just can’t help but fuck up. Perhaps qualities like this are why he is so relatable. Earn’s flaws are human on a deep level. Atlanta is just that: a show about humans being humans.

Atlanta airs on FX every Thursday at 10PM. Starring Donald Glover, Zazie Beetz, Lakeith Stanfield, Brian Tyree Henry. Stay up to date on this fantastic show with our weekly recaps.