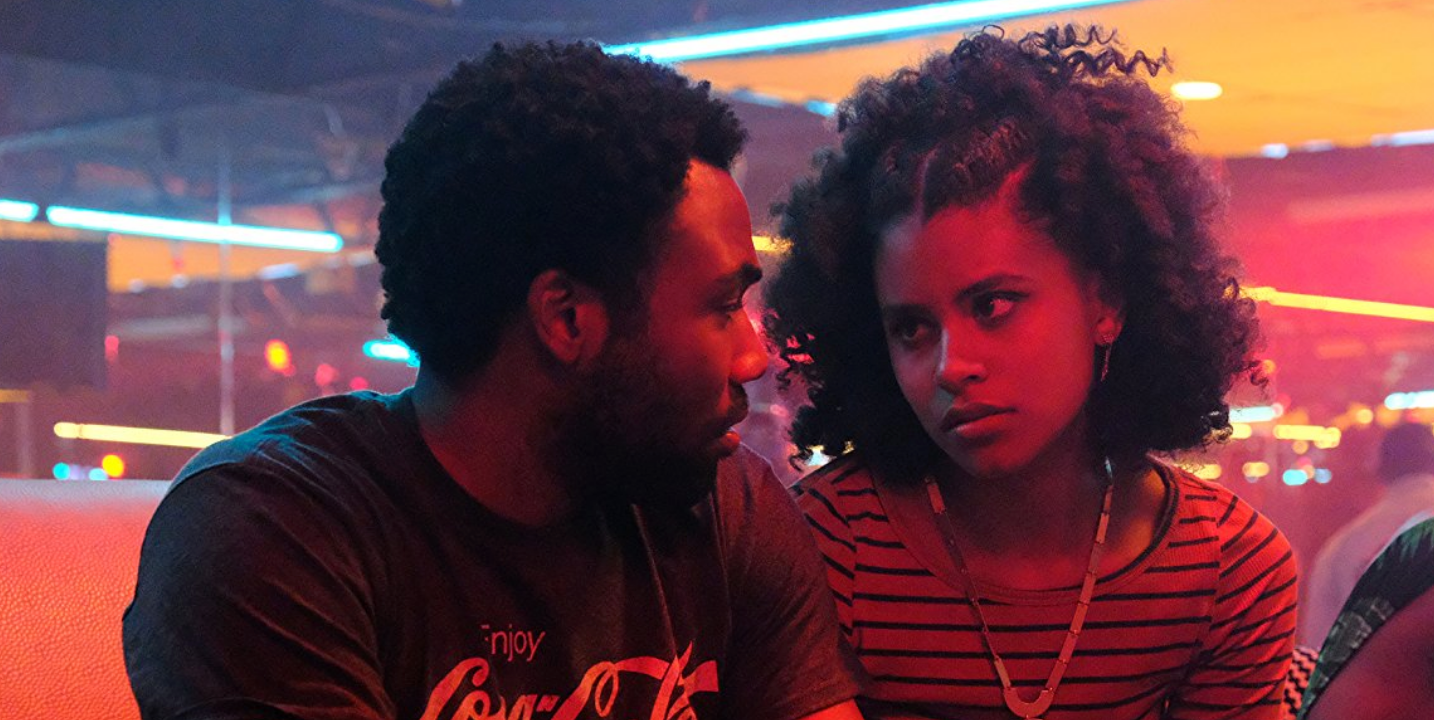 Back in 2016, a video of a white mother crying over Vince Staples’s song “Norf Norf” went viral. Vince had a couple of things to say about it, and so in “Money Bag Shawty’s” intro, we see a clip inspired by that. Same situation, but this crying white mom is ranting on about a Paper Boi song. The standout lyrics: “Still might have to slap a trick, shout out Colin Kaepernick.” While simultaneously hilarious, it is also a comment on political culture’s spite for hip hop. They claim it’s damaging and a bad influence. It also signifies a major theme of the episode: class, power, and money. Who are the ones who can accurately speak about art and on those who created it? Namely, I am talking here about black artists, like Paper Boi, trying to make a name for themselves in a world that has robbed them of everything for centuries. This white woman has no context and no knowledge of what is actually going on in the world outside her SUV and XMRadio’s walls.

We’re off the Clock Right Now

After commenting that a sobbing white lady is the best thing that could happen to Paper Boi’s career, Darius, Al, and Earn toast to the future and white tears. A restaurant waiter joins their dedicatory toast and follows by asking Alfred to “put him on.” Earn butts in, “we’re off the clock right now,” but the worker shuts him down hard. The waiter gets pulled back to work, as Alfred and Earn have a back and forth about bankroll and fame. Earn is “always getting stunted on,” to which Alfred says, “welcome to Atlanta. All you need is some money.” Greenbacks are significant for the episode, as we will see. The scene ends with a hilarious and strange Darius-ism, “I feel everything,” in stony-eyed, dead pan fashion. Perhaps he really does feel everything.

Earn and Van meet up at her place, talking while lounging on the bed. Earn’s got his money and feels the need to spend it to prove himself as one who can stunt. When Earn shows her his check, Van comments, “you’re gonna get us robbed.” Cash is chaotically cherished. Spend it, or be spent.

Something Wicked This Way Comes 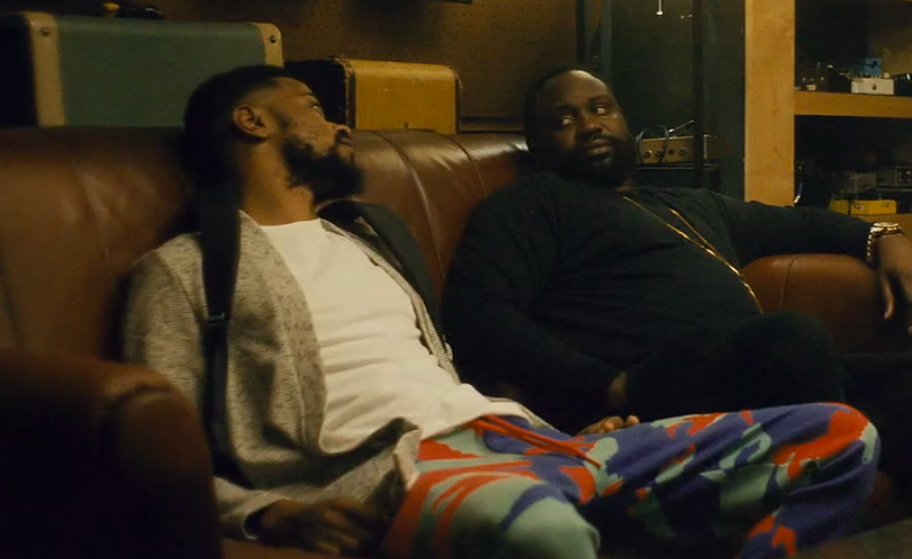 Getting further into Season 2, the mood is murkier. Things are darker and social overtones become even more pronounced. In “Money Bag Shawty,” Earn and Darius meet with rapper Clark County, of “YooHoo” song/ad fame, to record a few bars and maybe a hook or two. Clark County denies Alfred’s blunt and Hennessy, saying he doesn’t drink or smoke. The mood is set off kilter, which seems to be in fashion for Al’s solo scenes, and that tilted vision pervades the rest of the episode. Clark County is rude, domineering, and downright sinister in his scenes, played by a fantastic RJ Walker. Alas, he’s only that way towards the white studio producer, who can’t help crashing the audio workstation every time they go to record. Threats abound from Clark as this happens, switching from go lucky ease to flat affect seething.

Racism at the Movie Theater

Next, social power dynamics play out while Van and Earn are at the movie theater. Earn tries to pay with a hundred-dollar bill, only to have the white clerk reject his large bill. When he tries to pay with credit, she claims that his information must be taken down, which would be time-consuming. Earn, exasperated, gets out of line. A white man walks up, pays with a hundred-dollar bill, only to be accepted by the clerk. Earn calls him out, and as he does the white man reveals a holstered gun underneath his jacket. Defeated by the racist situation, Earn and Van try their money elsewhere. Back at the studio, Clark County, Al, and Darius discuss the rap world, marketing, and image. Branding is a big thing for artist prominence and once again wealth plays a large role in the conversation. Paper Boi turned down a Rap Snacks promotion, a flavor called “Cocaine White Cheddar.” Asked to load another song for Clark County, the audio engineer engages a fatal misstep. Clark County tells his associate Bugs he’s gonna “go for a walk” and leaves his associate to prove what it means to work with Clark County. Paper Boi and Darius are forced out, Bugs coldly urging “ya’ll should go home” as we leave the studio engineer to his doomed fate. Calamity may be synonymous with Clarke County.

At the hookah lounge, Earn gets the racist treatment AGAIN, as he is patted down and questioned about paying with an alleged fake hundred-dollar bill. The bill is checked, it has the correct watermark, but the bouncer doesn’t believe him. Earn decides to leave, but because he already went inside the club, he has to PAY. Do the money problems ever cease? As Van and Earn depart, a security guard remarks, “Hey. We all know that the bill was real, but the owner was tripping.” Van replies, “Well that was definitely racist.” Earn, saddened by the course of the night, still wants his celebratory evening. He’ll take his money where its wanted: the strip club. He calls in his crew, picking them up in a sleek and shiny stretch limousine.

You Can Strip It

As they enter the strip club, an omniscient promoter’s voice introduces Paper Boi and his posse. As the night progresses, our pushy omniscient club promoter berates Earn and forces him to tip the strippers. The table that “came with a bottle,” is a full price table and you also have to BUY the bottle. He’s about 400 or so dollars deep and more of his money keeps leaving his pocket.

Alfred and Earn discuss “the hundred-dollar bill” scenario. They return to their talk from earlier. “Money is an idea, man,” Alfred says while touching on how race and class, in unfortunate reality, play a role in how people are viewed in the world. He stresses that Earn needs to start treating himself better, so that other people will do the same. “I don’t even know why I’m here. This place has been finessing me all night.” “Duh, this is a strip club,” Alfred retorts, “that’s what it’s for.”

While leaving the strip club, in perhaps the episode’s second most bizarre moment, behind Clark County’s bipolar disposition, Michael Vick is racing people outside the strip club. Earn takes the challenge, once again trying to prove himself and his ability to stunt. A Rocky-esque freeze frame happens, triumphant music accompanying it, transitioning to Earn and Van back in the car. Looking annoyed and tired, Van remarks, “It’s Michael Vick,” while glaring out the window. Earn clearly lost the race. Once again, we’re back to square one with Earn. What did we learn? Atlanta airs on FX on Thursdays at 10Pm. It stars Donald Glover, Zazie Beetz, Brian Tyree Henry, and Lakeith Stanfield. Stay up to date on this fantastic show with our weekly recaps

P.S. This song isn’t in the episode, but is obviously relevant. Enjoy. East Atlanta Santa, himself.