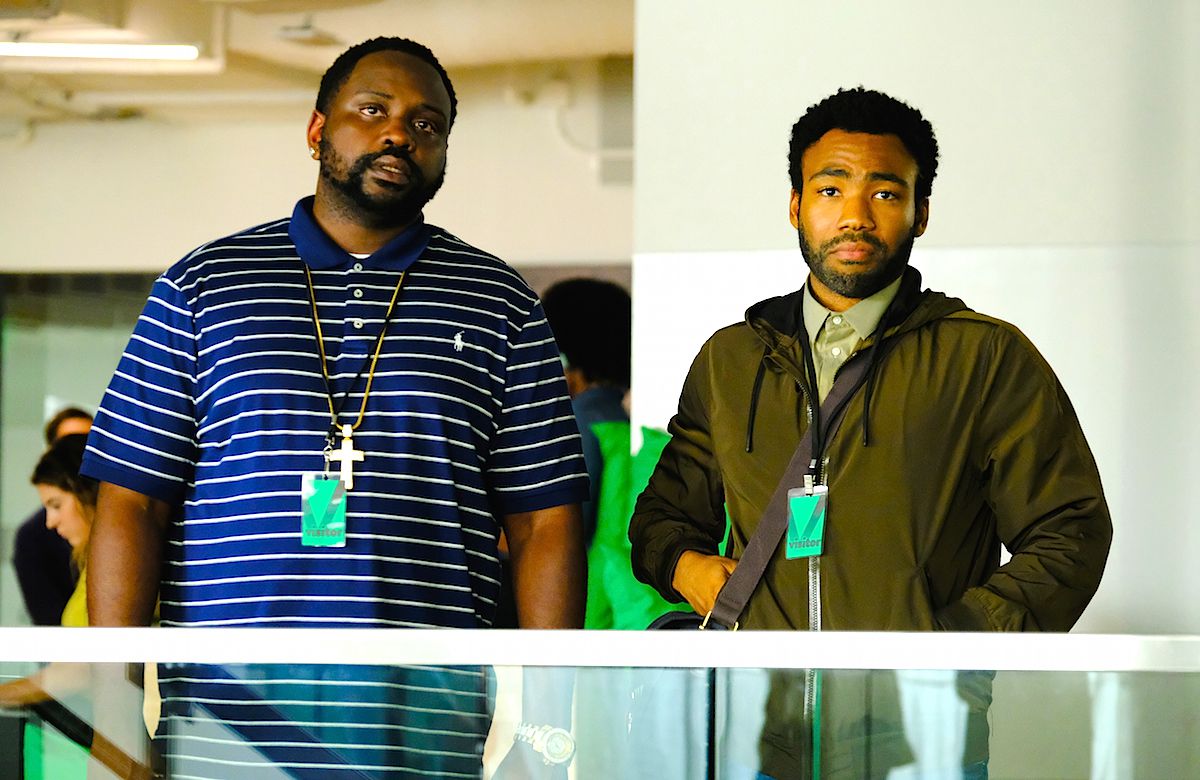 Episode two of the current season of Atlanta sees Alfred, aka Paper Boi, getting most of the spotlight. “Alligator Man” was a more Earn and Darius heavy episode so it’s good to see Alfred play catch-up with the audience. We can assume by now that Alfred is off house arrest, and that his music is actually not keeping him as afloat as people seem to think. Everyone’s a “fan” and wants a picture with him this time around, and he could not be less enchanted by these encounters. In the first five minutes, Alfred is robbed by his dealer in an extremely awkward fashion. The dealer urges Alfred to not be mad at him, that his new song “i’ll go platinum or something,” and that he “appreciates him.” All Paper Boi can do is watch in stunned aggravation. Hustle or be hustled, it seems. Bad shit happens, life sucks, you’re not alone. Cue Jeezy.

Enter a 35-year-old white dude, talking about his music facility’s fully stocked organic, gluten-free kitchen, referring to himself as “35 Savage” Somebody else quips, “Pretty soon we’ll be calling you 36 Savage!” Laughter all around the boardroom, as Earn and Alfred sit idly by watching the odd goings-on of corporate, and predominantly white, life. The next scene has Paper Boi reciting radio plugs for the still-unnamed music company, totally not enthused by the sound engineer’s suggestion to “say it like you’re at a party and everyone’s going crazy!” Next we see possibly the best scene of the episode, as Earn contemplatively watches Alfred through the studio glass, munching a baby box of Cheerios, while in the background the entire office of music execs just STARE at him, until he turns around and everything turns to normal, phones ringing and files passing hands. If this show is remembered for anything, it will be for these brilliantly bizarre moments.

Curiously though, and in following the show’s theme, how might this be a take on how streaming companies and music labels view black artists as potential exhibits? Existing in these spaces as “other” to the people who work there, something at which they can gawk while eating a banana. Paper Boi, in total discomfort, starts trying to rouse the office while intro’ing his hit single, and as the backing track begins to play, he walks off the small stage, exasperated.  It’s a broken performance, not by Paper Boi’s doing, but by the space’s inability to permeate real creativity and enthusiasm. At the end of the day, when did music change? When did they all become mindless entertainment drones? White people showing up in the spaces of Atlanta only serve to undermine our main characters and the other people of color they encounter. Earn is chuckled at by rapper Clarke County’s (RJ Walker) manager, and consistently pushed out of opportunities to sell Paper Boi. There is an inherent flaw in the way human beings, especially those in the United States, treat other human beings. Glover plays Earn with an unfazed disposition that alone speaks leagues about race relations within television shows and around the country.

Things get a bit lighter and funnier from this point in the episode. Darius and Al go to score weed, and Earn gives Tracy the four grand he just received for the puppies he had a hand in selling (an excellent callback and nice follow through from Season 1’s “The Streisand Effect” and also the episode Darius and Earn officially became friends). Tracy apparently flips cash for mall gift cards to double profits. He also steals from the mall shoe store because they have a “no-chase policy.” Hard to believe Earn falls for that kind of scheme from a dude like that. Seems as though Tracy might be due for some poetic justice in the near future.

Darius and Alfred talk shop with a new dealer, and as they’re testing out the various bud strains, their dealer takes a photo, to Alfred’s dismay. “Did you just take my photo?” “No,” the guy replies, only to stand up, walk to the corner, post the photo to Instagram, while Darius and Alfred get a notification that they’ve been posted online. Alfred just got off house arrest, and it’s definitely not a good thing that there’s a public photo of him with his hands in a giant jar of weed. The recurring theme of the “fans” and “insta-fame” ripple throughout this episode, reaching a fever pitch when Alfred exchanges numbers with a TJ Miller lookalike who claims to get the best weed ever from Humboldt County. As he leaves the house, he gets a text from TJ Miller’s tiny clone Andy with girlfriend Amber’s acoustic cover of “Paper Boi.” Darius remarks, “white girls love that shit.” THEN Amber texts Alfred and asks him to get a drink with her later. Poor Alfred can’t catch a break. He tosses his phone out the window and heads home with Darius.

“Some Old Lady Got My Vitamix…”

Back at the mall, Earn stays to actually buy his shoes, using the shady mall gift cards, but gets a text from an absent Tracy saying that “they’re onto you.” Clearly trying to get as much as possible from his mall gift cards before he loses all his money, we then have Earn carrying way too many retail bags and merchandise. He’s forced to take the bus, as Tracy left him behind for his job interview. When he returns to Alfred’s place, Earn comments that “some old lady took my Vitamix” on the bus, while Darius urges, “hope you got the insurance on that.”

The episode’s last moment includes an AWESOME commercial music video from rapper Clarke County, called “YooHoo,” which also serves as advertisement for the classic beverage. Best line of the show: “Flex on a bitch, YooHoo!” Then we see Tracy at his job interview armed with his “miraculous” waves, only to see the interviewer/job manager decline him the position. The manager remarks, “I think you have a lot of potential…unfortunately, I don’t think we’ll be able to offer you a job here right now,” which causes Tracy to storm out and exclaim “Ameri-KKK!” This is kind of absurd, considering that they clearly HAVE a job opening, but there’s something that stops them from hiring Tracy. The American workforce is definitely biased, and Tracy is not far off asserting the inherent racism in these kinds of moments.

There’s a lot to unpack here, but I’ll keep it brief. Music companies are weird, it’s awkward to be a black rapper, and once you get even semi-famous, everyone’s a fan. Where Season one had a glow to it, a hint of lightheartedness, there’s been a dramatic tone shift. The satire is heavier, the messages more truthful and uncomfortable. That said, we could all stand to be a little bit uncomfortable once in a while, if not all the time. EPISODE HIGHLIGHT:  watching Alfred stoned as hell staring at a winged bearded dragon is the funniest thing to me, especially as Flying Lotus’s “Coronus the Terminator” plays quietly.

Atlanta airs Thursdays at 10PM on FX. Starring Donald Glover, LaKeith Stanfield, Brian Tyree Henry, and Zazie Beetz. Stay up to date on this fantastic show with our weekly recaps.