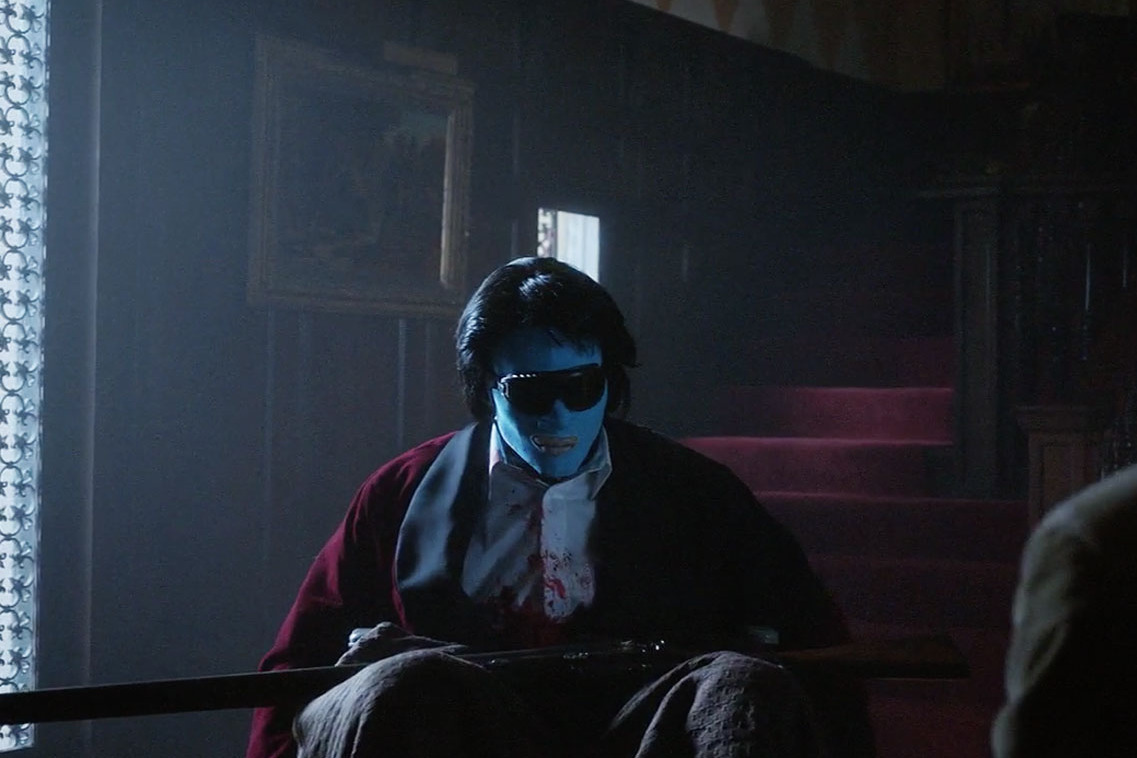 Thursday’s latest entry in Atlanta‘s second season may be the best yet. “Teddy Perkins” is a solo tale starring the king of vibes, Darius. The episode opens with him at a convenience store. “Do you got any dehydrated mango?  Ginger?” Darius asks to no avail. Soon after, he spots a confederate flag hat that reads: “SOUTHERN MADE.” He snags a red Sharpie marker and crosses some letters out so the hat reads “U Mad.” Onlookers gawk as Darius hops in his U-Haul truck. He’s off to receive what we can assume is a mysterious and large package.

While Stevie Wonder’s “Sweet Little Girl” blasts through the stereo, Darius pulls into a driveway and rings the buzzer. A croaky voice answers, “Hello?” As Darius confirms he’s arrived for the pickup, the gate opens and he drives in. An enormous, ramshackle mansion is shown and things seem a bit off. Darius saunters up to the door. It creeps open, forebodingly.

Out of the darkness of the front foyer emerges our titular character, one Theodore Perkins. Teddy evokes a caricatured Michael Jackson with a Get Out sensibility and some Looney Tunes thrown in. Behind all the prosthetic makeup and vibrant blue contact lenses, lies Donald Glover. Once you hear his voice, it just clicks (I FREAKED OUT). Perkins’s cartoony-ness immediately places him in the uncanny valley. He extends a double-handed handshake towards Darius to no avail. Teddy is definitely different. The ensuing discomfort of watching Teddy disembowel a hardboiled ostrich egg (“an owl’s casket”) follows. While he gobbles the ostrich goo, it’s revealed why Darius has arrived. He’s come to pick up a seemingly free vintage multi-colored key piano.

The piano is owned by Teddy’s brother, Benny Hope. It’s told that Benny Hope was a famous musician who worked with the likes of Nina Simone, Ahmad Jamal and Stevie Wonder. Evidently, Teddy and Benny have a storied past in the music industry. Teddy remarks, “My brother and Ahmad, they were staying in a hotel in Brooklyn…he told me something I’ll never forget. He said, ‘Your brother plays pain better than anyone.'” Pain is a recurring topic for Teddy. He mentions he takes care of Benny now because of a rare skin condition that makes him allergic to sunlight.

The Promised Glass of Water

Darius remembers that Teddy’s butler never brought him the glass of water he requested. Teddy reveals there is no butler, that he actually recorded the command so he could remember it. He plays back the recorder and it repeats, “Finish that hat for Dionne Warwick…Wash your hands, immediately…Darius would like a glass of water when you have a moment.” Teddy leaves to presumably get Darius’s remembered water. Unable to sit by the ostrich egg remains, Darius walks into a nearby study. The camera transitions to a security room full of screens, one of which watches Darius. All is not well. With a jump cut, Darius sneezes, and Ahmad Jamal’s “Piano Solo 11” starts ringing through the mansion. 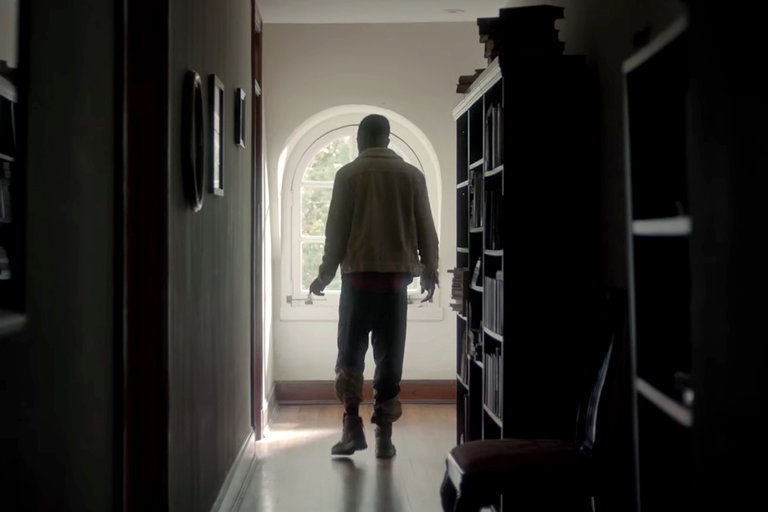 As his footsteps thud, Darius looks at the various pictures framed in the hallway. One in particular displays a wheelchair bound gentleman adorned in a yellow face mask with sunglasses. Darius reaches the source of the music when Teddy suddenly opens the door. Teddy shushes him as Benny is supposedly sleeping. An empty wheelchair sits by the piano. Teddy asks if Darius still wants the water, musing on the bottled options: Fiji, Evian, and Poland Springs.

Next, Darius paces outside Teddy’s mansion while on a phone call with Alfred. Darius lays out the situation, but is clearly put off by Teddy’s stalling. Al urges him to leave and remarks, “is you willing to die for it, though, man? He sounds like a serial killer.” Darius replies, “If I leave, I’ll regret it. I have a two regret life limit pact.” At this point, it’s evident that this episode works only with Darius at the helm. He loves weird shit, and weird people. Al or Earn would have peeled out after just seeing Teddy. He’s equally as interested in the owner of this kaleidoscopic piano.

Darius is convinced Benny made up Teddy to “make up for the fact that he made himself look like a ghoul.” He adds,”he looks like somebody left Sammy Sosa in the dryer. Have somebody type in ‘Sammy Sosa hat’ in Google image search’.” Google it yourself, and you’ll see what he means.

The interaction with Al is crucial because Darius’s situation at first seems like atypical Darius fare. Their phone call roots Darius back into reality, a brief respite from Teddy’s funhouse. As Darius reenters the mansion, Teddy shows off his “gift shop,” a trophy room for Benny’s various merchandise. For Darius, however, he saves the best for last.  As he opens a set of newspaper-covered doors, you’d think Darius would be sprinting out the door.

Surrounded by darkness, the doors closing behind them, a light shines on a faceless mannequin clad in a full suit.  The mannequin’s throat seems to be slit, and what looks like caked blood sits on its neck. “This is my father. He’s the reason for all of this,” Teddy says. “It’s because of him we have all this.”

Teddy goes on to talk about his father’s rigorous practice schedule for Teddy and Benny. At the end of the week, if they had not finished their lessons, it was met with physical punishment. Teddy claims it was necessary, that the pain made them into better musicians. “We were his sacrifice,” Teddy says. “To make an omelet, you have to break a few eggs.” Darius is flabbergasted that Teddy shows no resentment toward his father. “I want this wing of the museum to be dedicated to great fathers. Joe Jackson, Marvin Gaye Sr., Tiger Woods’s father…” Teddy trails on. All these men are known for being abusive to their children, though some claimed the hardship aided their success.  Darius cuts him off, eager to take care of the piano. Teddy seems perturbed by this.

Upstairs, they sign paperwork and partake in hostile conversation. Teddy slams down the contract, and storms out to turn on the elevator. Darius notices a stray drop of blood among the rainbow piano keys. Sensing it’s time to escape, he slings the piano onto the elevator. He watches in fear as the elevator takes him past the first floor to the basement. “Fine, destiny,” Darius mumbles, as he enters the bubbling, gurgling dungeon of the Perkins mansion.

A silent, wheel-chaired man pops out from behind Darius. He scrawls on a chalkboard that Teddy plans to kill both he and Darius, and that Darius must grab his gun from the attic. Darius, somewhat bothered, remarks he’s going to get the gun after loading the piano.

The episode reaches a fever pitch. As Darius rolls outside, piano finally in his clutches, he notices Teddy’s car is blocking the driveway. He asks Teddy to move it, to no response. Fire poker in hand, he walks back through the gift shop to find Teddy watching old home videos of tortured rehearsals with his father. Teddy pulls the “attic gun” on Darius, an enormous shotgun, forcing him downstairs.

Now handcuffed to an ornate chair, Darius makes attempts to console Benny. It starts to feel like Darius might even die here. As Darius talks about his daddy issues, Teddy paces uncomfortably. Darius mentions the “what if factor.”  He says, “What if you would have seen love, instead of all the other shit, like Stevie?” Teddy says, “Stevie had his own sacrifices. He was blind.”

While they talk, the elevator starts to rumble. Teddy, in shock, remarks, “Benny. You’re alive,” as Benny emerges from the compartment. Grabbing the shotgun, Benny blasts Teddy. He wheels over to Darius, who thinks Benny is trying to free him. Benny takes the fire poker from Darius, using it to rig the shotgun in order to shoot himself.

Stevie Wonder’s “Evil” closes out the episode, as Darius is left to put together all the pieces of this familial murder-suicide. He watches as the police cart Benny, Teddy, and finally the coveted piano, out of the house. Much like in last week’s “Barbershop,” Darius’s somewhat normal day gets interrupted by the surreal. Among its many nooks and crannies, Atlanta still manages to skirt sitcom conventions and truly tickle the audience’s craving for the fresh and bold. “Teddy Perkins” is a television masterpiece, calling back to imagery like The Jumping Man from Twin Peaks as well as several other cinematic classics. I’m putting it out there: Atlanta will undoubtedly sweep the Emmys this year.

Atlanta airs on FX at 10PM every Thursday. The show stars Lakeith Stanfield, Donald Glover, Zazie Beetz and Brian Tyree Henry. Be sure to stay up to date on our weekly episode recaps here.