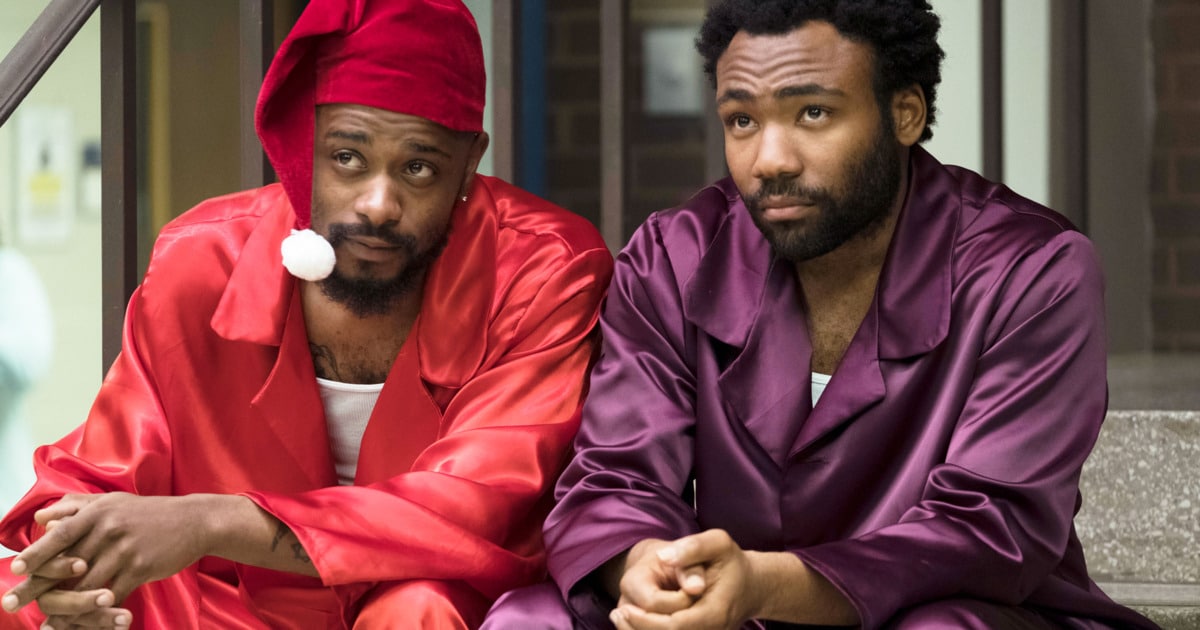 Atlanta S2E9: “North of the Border”

“North of the Border” touches on many of the hints season two has scattered throughout the episodes thus far. With only two episodes left in the season, the loose ends start to tie up. Al finally addresses Earn about his management skills (or lack of) and makes it clear their paths may go separate ways. This all happens at an out-of-town event in Statesboro, Georgia.

“Earn are you allergic to jicama?”

The episode opens with Al and Earn hurriedly gathering their bags. Al, begrudgingly, searches for his gun, subtly questioning the decision to play another free show. Likely he feels he’s paid his dues to the rap community, and Earn should be booking more major paid events (though this event promises a future $60K for a Spring Fling). Tracy shows up to Al’s dismay (he nearly shoots Tracy). He barely flinches when Al calls him out for continually breaking into his house (“what happened to ‘one-week Tracy’?”). Earn tries his best to deflect Tracy’s attempts to join their trip, until Al offers him $200 for event security. In terrifically over-serious form, Tracy takes the offer. Later, as Kodak Black’s “Patty Cake” plays quietly in the background, he jumps at any car that follows them for more than a few blocks.

The Crane and the Alligator

Again, to Al’s displeasure, he finds out Earn’s “hotel” is actually the guys crashing with some college ladies. Their apartment is in a basic housing complex. “A1, that’s a good sign,” Earn comments before knocking on the door. Violet, who runs the Pajama Jam answers the door and shows Al to her room. Earn’s choice to stay with these ladies likely plays to Paper Boi’s vanity and his wanting to rap to college girls. However, Violet ends up enacting some unnerving pillow talk with Al, a retelling of her dream where Al, “a beautiful white crane,” is eaten by her in the form of an alligator (potential Alligator Man reference??). Violet embraces him and says, “And I knew that meant that we were connected.” Al glances at the ceiling, noticing a faint footprint. He chuckles, but his face says it all.

Things begin to go awry at the Pajama Jam. Clarke County has apparently stopped by to perform, with his sleek manager in tow. The manager seems a little familiar with Al, maybe trying to make a deal for Paper Boi. Violet and the ladies follow Clarke County upstairs for bottle service as Al hangs back, glad to skrrt Violet.

Earn and Darius discuss Clarke County’s definite potential as a rap industry plant, while Al cools it with a gorgeous, literature major student (“like a Paper Boi paper?”). A drink falls on him from above, and we see that Violet is the culprit. Here, things get tricky as Tracy confronts her, eventually pushing her down the stairs. For the longest five seconds, I thought for sure this woman would break her neck. Earn breaks her fall, luckily, but then she slaps him. Tensions get high, as a group confronts them. Earn tries to settle it, until Tracy clocks one of the dudes out of nowhere. They sprint through the school hallways to safety.

“That Shit Was Crazy. Me and Paper Boi!”

Al, frustrated, is thirsty for some weed. The guys happen upon a frat house and some white, die-hard hip hop fans. They gladly smoke Paper Boi up, all while screaming orders at their frat pledges. In one of the most Atlanta scenes of the series, we watch a roomful of naked men dance to D4L’s “Laffy Taffy,” to hilarious effect. It is also this moment, like so many others in Robbin’ Season so far, that it feels like things could get so much worse.  Seeing Al, Earn, Darius and Tracy sit in front of a giant Confederate flag in a house full of privileged white boys, with boatloads of guns, doing weird shit…it just left sinister feelings.

“North of the Border” feels heavy for the apparent reason that it has the most important plot development of the season. It took nine episodes for them to get here. Al determinately confronts Earn about his (or to Earn, their) rap career. “Tonight was some bullshit,” Al remarks, “I think we need to talk about a real problem.” Earn thinks it’s about Tracy, to which Al giggles, and replies, “I’m talking ’bout yo’ ass.” Al is talking to Clarke County’s manager currently, “cause money is important.” Earn is family, and he’s loyal to that, but Al says “I gotta make my next moves my best moves, man. Something’s gotta shake.” To Al, Earn isn’t cut out for managing Paper Boi. Rough words for a guy who can barely keep his life together as is. To lose everything is to lose Paper Boi.

Reap What You Sow, Earn

The wee hours of the morning approaching, the guys exit the frat house. It’s just funny to see them in loose pajamas while college students saunter to class. When they arrive at Violet’s apartment, they find their car in shambles, their clothes cut up, and eventually Earn finds his laptop is missing. Al is furious, but manages to keep it cool, now unburdened by the conversation with Earn. It gets even more cringey when Al laughs into the sky and Earn starts yelling at Violet’s door. He proceeds to kick it in, and sets off the fire alarm.  Tracy watches gleefully at the continual chaos Earn sows. It becomes even more apparent that Earn is bad news for Paper Boi’s career.

The drive home remains awkward as Tracy, playing with a stolen rifle from the frat house, teases Earn about his behavior and management. In an attempt to rouse his pride, Earn forces Al to pullover so he can fight Tracy. In blatantly symbolic fashion, Earn is beat down by the one person who continually tortures him throughout the episode. It’s difficult to watch. We are watching the downfall of one of Atlanta’s main characters. Just like trying to beat Michael Vick in a foot race, Earn loses again. The episode’s closing shot is a bloody, swollen Earn reentering the car. “Am I A Good Man” by Them Two plays out the credits. It left me wondering the same about Earn.

Is Earn a Good Man(ager)?

If Al fires Earn, he’ll have no cash flow to care for his daughter Lottie. Add to that having zero chances of regaining favor with Van. With a character like Earn, though, it’s hard to tell if he cares much about that (Van, not Lottie. Earn’s at least proved to be a decent dad). He’s pretty much on his last family bailout through Paper Boi. If he screws this up, it’s lights out. I considered the chance that Earn may not even be on the show next season, seeing as how season two has mostly avoided coherent plot lines and conventional characters. All that being said, I do like a victory lap and hope the best for Earn. I’d love to see him win something for once. Robbin’ Season has been a doozy so far. I can’t wait for Thursday’s episode “FUBU” to see where they take things.