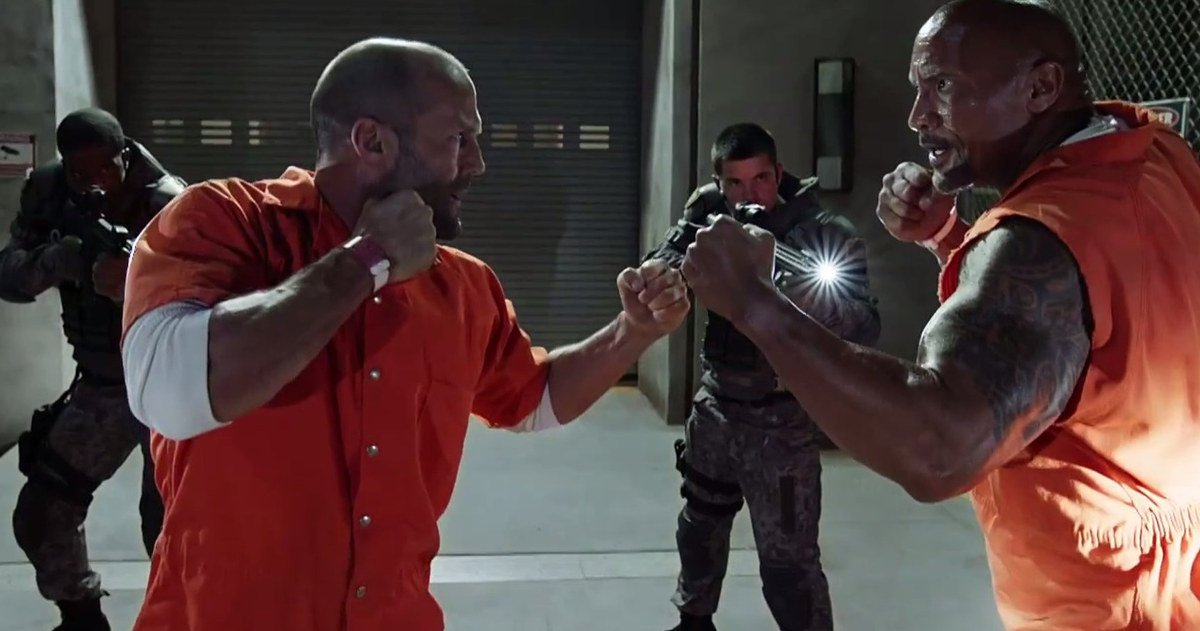 Even with a bunch of other cool titles hitting theaters last month, the box office was dominated by Beauty and the Beast. Looking at April movies, it’s probable that we’ll be seeing another single movie take the bulk of the movie money this month. But this one, The Fate of the Furious, involves big dudes punching each other in the face, crashing expensive cars, and a lot of exposed biceps. So it’s only slightly different from Beauty and the Beast. Here’s our April movie preview.

Going in Style has quite the list of iconic leads. Morgan Freeman, Michael Caine, and Alan Arkin play friends who decide to rob a bank to get back their money that was unfairly taken from them. The movie is set up as one big joke about being old. Even the tag line is, “You’re never too old to get even.” One moment used heavily in trailers has the characters attempting an escape on a mobility scooter. It still looks funny though.

I will admit I saw the two previous Smurfs movies in theaters. Did I enjoy either one? Not particularly. But the latest, Smurfs: The Lost Village seems to be a bit of a change in direction. This one is completely animated. The others were a hybrid with Neil Patrick Harris starring as a human alongside the animated blue Smurfs. The voice cast has also changed. Demi Lovato now plays Smurfette in place of Katy Perry. Rainn Wilson, Joe Manganiello, and Mandy Patinkin also lend voices to The Lost Village.

April 14th– The Fate of the Furious

As the Fast and the Furious franchise has progressed it has become less about the cars and more about the over the top stunts. Audiences don’t seem to be complaining as the movies draw huge money at the box office. The eighth movie, The Fate of the Furious has Vin Diesel’s character, Dom, apparently turning to a life of terrorism. The word “family” is mentioned about 86 times in the three-minute trailer, so expect Dom’s family of the furious… fast and the family to lure him back to the good side. In terms of stunts, there are cars flying from windows and a high-speed ice chase involving a submarine, a tank, a Lamborghini, and The Rock redirecting a torpedo with his bare hands. What a movie.

Planet Earth II recently rekindled my obsession with nature shows. So the release of Disney Nature’s Born in China is pretty well-timed. Like the other Disneynature films, this one follows a group of animals and builds a narrative around them. John Krasinski narrates the stories of a panda mother and her cub, a golden monkey, and also a snow leopard family. It’s a good choice for the family to celebrate Earth Day.

Free Fire is a quirky action comedy centered around two gangs meeting in a warehouse in 1978 to make a deal. It results in a shootout of epic proportions with everyone attempting to escape and gun down their rivals. Brie Larson stars alongside Armie Hammer, Sharlto Copley, and Cillian Murphy. Since it looks like the entire movie takes place in the one warehouse, that strong cast is important.

Oscar Isaac and Christian Bale star in The Promise, a wartime drama about the last days of the Ottoman Empire. Based on a true story, Isaac plays a medical student who falls in love with a woman (Charlotte Le Bon) who is in a relationship with Bale’s character, an American journalist. But World War I and the Armenian genocide means there are threats around every turn. The movie looks like a powerful take on a point in history that isn’t commonly discussed in American schools.

Unforgettable has Katherine Heigl playing a crazy ex-wife. Not too long after her divorce, Heigl’s ex (Geoff Stults) gets engaged to a woman played by Rosario Dawson. But as Dawson’s character is excited to get married and also become a stepmother, Heigl’s character isn’t as thrilled. She tries to break the couple up and things turn quite creepy.

April 28th– The Circle, How to Be a Latin Lover, Sleight

Emma Watson is back, but this tale isn’t as old as time, it’s as old as the Internet. In The Circle, Watson rises through the ranks of a prominent tech company, but is faced with a difficult situation when she learns the privacy of the public is being compromised by the company. Tom Hanks also stars as the head of the company alongside John Boyega, Karen Gillian, and the late Bill Paxton. It’s a thriller for the digital age and probably worth a watch. It will make you want to put some tape over your laptop’s camera. That’s for sure.

How to Be a Latin Lover follows a man (Eugenio Derbez) who made a habit of seducing rich older women. But now he’s on his own after a long marriage. So he moves in with his sister, played by Selma Hayek, and her son. He begins to see what having a family is all about. But not before finding himself in some comical and embarrassing situations.

There aren’t any comic book movies this month, but Sleight may just fill that void. Jacob Latimore plays a street magician who gets in too deep with some illegal activities. When his little sister gets kidnapped, he uses his magic skills to save her. But it looks like the sleight of hand may be more of a superpower than an illusion. We’ll find out the truth when this hits theaters.

Like I said at the start, The Fate of the Furious is definitely the stand out April movie. So I’m gearing up to see that one. Beyond Fate, Free Fire looks like a unique project. I’m interested to see how that one pans out. It’s hard to believe, but next month is May, which means summer blockbusters are coming. Get ready!

The iTunes $0.99 Movie of the Week: ‘Deepwater Horizon’