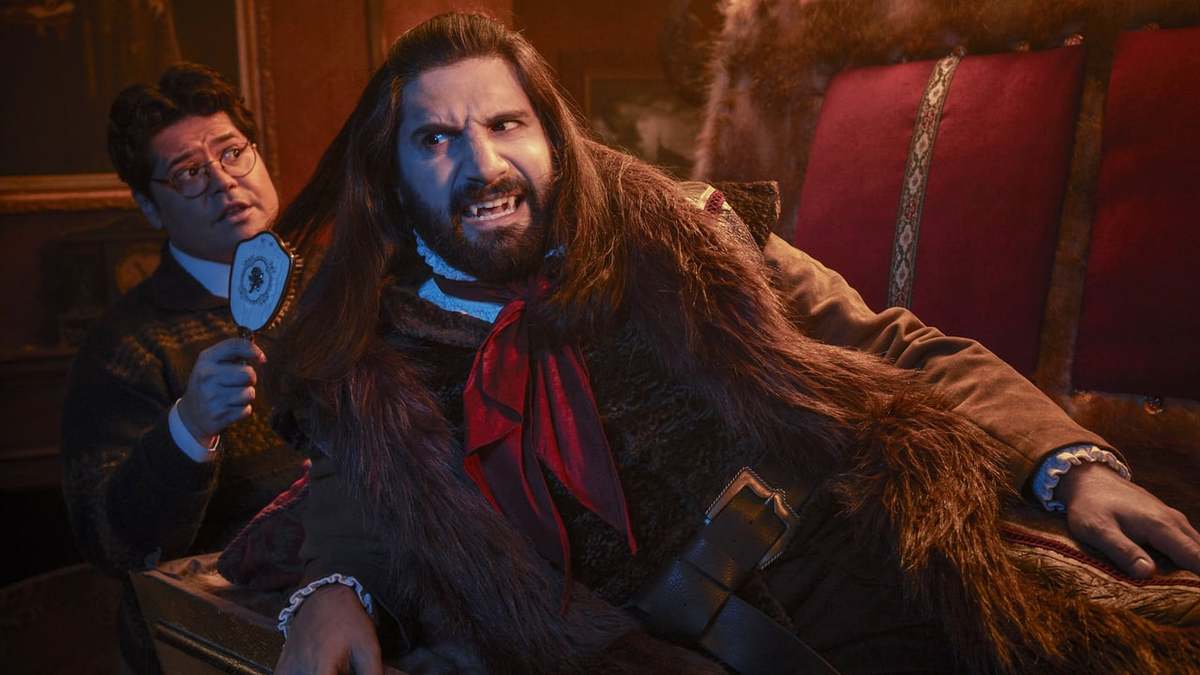 Before we dive into the nitty-gritty (clever code, here, for “Kelly’s continued pure, unmitigated delight”) of episode 2, I have done a little bit of pro bono digging, and found that the name of the What We do in the Shadows theme song is called “You’re Dead” by Norma Tanega, and I highly recommend Youtube-ing the shit out of it. We could call it a useful accompaniment to this review, but realistically, it’s just an earworm that you’ll be delighted you got stuck in your head for the next 24 hours or so. In a way, it’s the perfect distillation of What We do in the Shadows so far – a deceptively upbeat and perky approach to something very dark.

Because What We do in the Shadows is a new series, episode 2 still works as a bit of a table setter. The vamps now have a bit of a plan. The Baron (who only gives his orders during the moment of orgasm, so no one hears them clearly or knows what they’re agreeing to) pretty emphatically wants them to take over the land – there is some debate amongst the assembled about whether that means Staten Island, the New World, North America, and if Canada should be involved at all. Luckily, Colin Robinson knows all about how to curry power and favor, being as any good energy vampire would, an aficionado or local city council meetings. Though they are loath to endure his company, the vamps go with Colin Robinson (who is only ever referred to by both names. Presumably and act of respect for the most fearsome creature they can conceive of) to what turns out to be a zoning meeting.

Nandor, as the unofficial spokesperson of the group, attempts to lay out their demands-including but not limited to Laszlo’s ban on all turtlenecks – but is shut down pretty quickly by the council leader, Barbara Lazarro. She – very politely, given the deeply ominous tone of Nandor’s declarations – explains that it’s a zoning meeting, but if he wants to come back another time, he’s welcome to.

Our vamps now have a general (and let us be abundantly clear here…it is VERY general) understanding of the workings of local government. Barbara is the head and has some semblance of control, but she can be voted out by Doug Peterson, who is running against her in the local elections. Nandor thinks the best course of action is to turn Doug Peterson into his puppet and have him unseat Barbara. Laszlo thinks the trick is to woo Barbara. Nadjia doesn’t really give a shit either way, she is more interested in helping out Jenna, the sad and sole lady LARP-er we met the last episode.

Alas, success is not quickly forthcoming for the boys of the band. Laszlo’s offering of a copious pile of dead raccoons he wooed by playing the clarinet (writing that sentence made me so happy) frightens Barbara Lazarro, and the absolutely insane invective Doug Peterson directs at her under Nandor’s control at the council meeting renders him toothless. Nadjia, on the other hand successfully turns a very confused Jenna into a vampire, to Guillermo’s quiet chagrin.

Certain sneaky little elements are beginning to reveal themselves about the show. In the sort of “what happens when people stop being polite and get real” confessional, solo interviews with Nandor and Laszlo, both reveal a certain, creeping contempt for the other. Laszlo, however, qualifies – don’t let Nandor see this. In his own, strange way, Laszlo fancies himself a diplomat. He’s wildly wrong, of course, but he believes in his charm and in using it to get his way – and in talking shit behind the back of someone more powerful than him, provided they’ll never hear it. Nandor is more open with his reservations about Laszlo, and it seems inevitable that such a tension will come into play frequently throughout the rest of the season.

Nadjia, on the other hand, has the potential to be the most intriguing of the three. She is less interested with vampire bureaucratic bullshit and shows signs of fatigue with the sweet dumb dumbs she lives with. It’s easy enough to believe that her decision to turn Jenna into a vampire is spurred by a desire to give the girl a gift – she sees some of herself in a woman being looked over in favor of men – but it is equally plausible at this point that she wants a companion who won’t be drawn into alpha male posturing. We shall see.

As before, the show utilizes the culture shock between the old world and the new one to great effect. The vampires are very funny, but so is the absolute lack of reaction from any of the modern humans around them. Why shouldn’t they wear capes and ruffs and release strange polemics in city council meetings? Of course, it is New York….

Still, perhaps the greatest charm is in the strange and often weirdly innocent turns of phrase the show throws around. I wish that I had taken the time to write down more exact quotes – and in the future I will, though the delight of reading them could never match the absolute pleasure of hearing them delivered by such and adept cast – but a standout is certainly Nandor chastising Guillermo to be careful when dusting around a spider’s web – “you wouldn’t like it if a spider came around dusting your house.”

As a parting gift, here is a link to the theme song. Trust that it will be stuck in your head until next week, when we meet again to discuss episode 3: