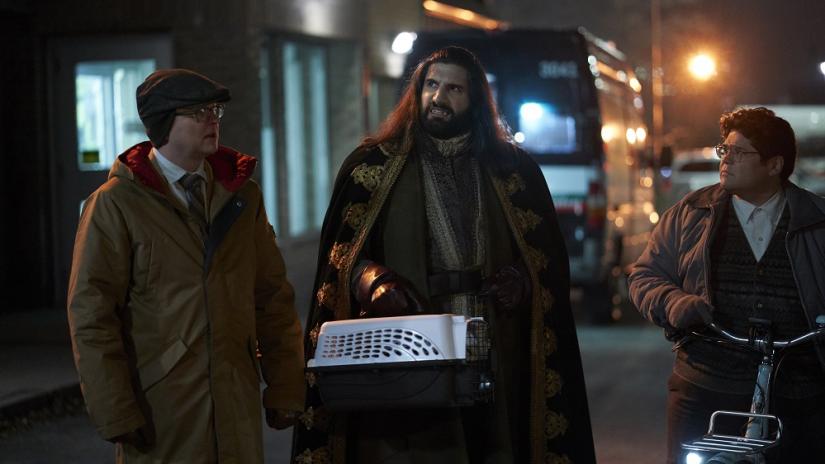 If you can divorce yourself emotionally, there is a sort of pleasure in watching the growing pains of a freshman show. Sometimes it’s the unmitigated delight that we as humans  – perverse critters that we are – feel watching a chain reaction train-wreck. But often it is the charm of watching a doe find it’s feet. There will be stumbles and tripping, but increased grace and confidence as it develops. And while I’ve had little to criticize with What We Do in the Shadows, I’m still just pleased as punch (whatever that means. If you know the origins, please let me know) to see it become a stronger, more cohesive show. This week, for the first time, we were able to have an A and a B story that began wholly separate from each other, but blended together damn near seamlessly to unite our heroes.

After a night of fine dining, Laszlo decides to turn the vamps’ new neighbor, Phil, into dessert and turns into a bat to infiltrate Phil’s home. He gets in through the window, but as Phil is about to “submit to his dark power” (his words, not mine, and if you can manage it, I implore you to hear it in Matt Berry’s voice. It enriches the experience so much), Phil’s girlfriend arrives home, and Laszlo attempts to make good his escape in bat form. Unfortunately, Phil’s lady love is quick with a broom, and beats the ever loving vampire snot out of bat Laszlo. Nadjia, having gotten bored by “submit to my dark power,” has wandered off to find Gregor/Jeff (he’s back!), but luckily for Laszlo, Guillermo and Nandor were watching the whole scene from their window. Colin Robinson – who may, in fact, be the season’s stealth MVP – joins the pair as they go to rescue Laszlo. Unfortunately, Animal Control gets there before they do, and Laszlo is carted off, still a bat. The rest of the A storyline is Nandor, Guillermo and Colin Robinson tracking down Laszlo and attempting to free him, and Laszlo, having come to in his vampire form in a cage, trying to convince the other animals caged with him to help him stage a coup. And yes, I understand fully that humor is subjective, and how much mileage you comedically get out of Matt Berry simply saying things may vary, but for me personally, every time he very earnestly addressed a cat, I sort of lost my shit. I wish I had more eloquent phrasing for that, but alas, it’s what happened, in the most honest of terms. Nandor eventually turns himself into a dog to try and free Laszlo, a plan which only lands them both in animal jail, which, as Laszlo points out, is a very bad plan.

Meanwhile, Nadjia has found her many times reincarnated lover Gregor-now-Jeff, working at a parking garage. I had previously expressed some concern that his character was rather unceremoniously abandoned, but his return made the absence worth it. Jeff, it turns out, is indeed the spirit of Nadjia’s former lover, but he is not Gregor-not washerwoman Gregor, not many-kinds-of-mongering Gregor, and certainly not used-to-be-a-horse Gregor. He’s just a sort of sweet dummy. And that will not suffice, so Nadjia regresses him through his past lives, until he remembers the Gregor he once was. They are about to celebrate the return of his old self by boning on the filthy floor of his garage (a thought that even though fictional, made my skin crawl) when Nadjia receives a call from Guillermo, informing her that Laszlo had gotten himself into some trouble. Nadjia leaves a now irate Gregor behind to go to animal control, hypnotize the front desk fellow, and retrieve Laszlo and Nandor. Both plots meet in an organic way.

I had, at some point, taken a slight bit of umbrage with the idea that Nadjia could so easily do what the four men could not – initially it seemed like perhaps narrative laziness in the face of wrapping things up within the half hour allotted. But ultimately, there is precedent here. Nadjia has consistently been more practical and efficient than the men. Guillermo – to his credit – has no powers, so that’s certainly not on him. Laszlo is a bit of a gluttonous goofball, so not terribly effective. Nandor is too much a creature of the old world to be effective in a modern sense. And Colin Robinson can only drain energy. Well, drain energy and talk shit. As much as we’ve come to know these characters by now, the show threw a fun new quality to Colin Robinson in this week (see: stealth MVP) by having him pretty constantly burning the more traditional vampires and their inability to be in the sunlight or eat brunch.

There are also, for the vampire enthusiast (you know who you are. Don’t be ashamed!) a couple of fun nods to the Francis Ford Coppola Dracula in this episode. Nadjia tells Gregor-Jeff that she has crossed oceans of time to be with him, almost exactly what Dracula tells Mina. Also, she turns into a large, writing pile of rats when she leaves him to rescue Laszlo, which has no narrative significance other than to nod to Gary Oldman’s transformation into same in the aforementioned film.

We have now seen the return of two ancillary characters. Though Jenna didn’t get much screen time last episode, Gregor-Jeff was pretty damn fun this episode, and though he has, Nadjia informs us, a terrible history of being decapitated in every incarnation, I am hopeful he’ll stick around for awhile. The show has pretty surely found it’s legs.