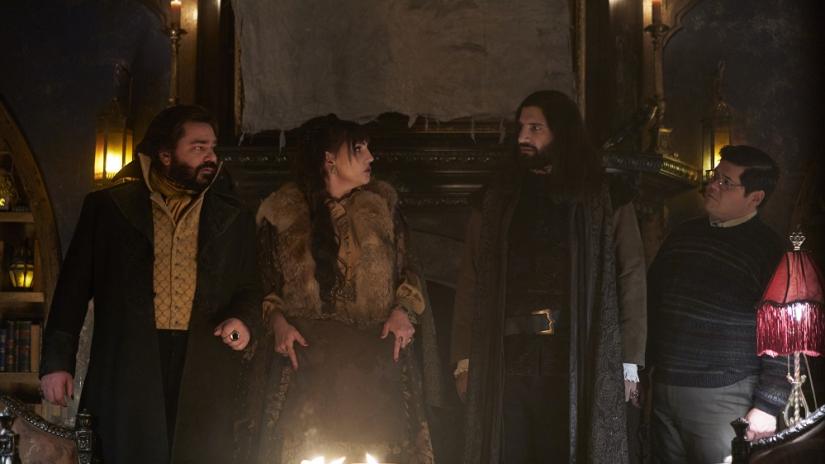 I abhor lateness, and yet here we are. I spent the past several days in a Mucinex haze (they do not sponsor my life in any way, though if they wanted to, I would take the money. Waiting on you, Mr. Mucinex), doing little beyond blowing my nose and watching Pet Sematary movies. All of which is to say, this is happening a lot later than I intended and for that I apologize. Especially because the most recent episode of What We do in the Shadows is an awful lot of fun.

It opens – as all things probably should – with Matt Berry giving a delighted speech about his passion for topiary. He gives an ecstatic tour through his various shrub sculptures, culminating in his garden of vulvas (and raising the question of whether or not he was Jack the Ripper, when the first vulva he shows was modeled after Polly Nichols, a Ripper victim). Listen friends, I know it is not particularly high-brow humor to have sculptures of vulvas quite literally made out of bushes, but if there is any small part of you possessed by a 13-year-old boy, any cell infused with that life, you too will grudgingly appreciate that bit of low art. Anyway! When Laszlo reaches the point of pride, a vulva sculpture that is disturbingly inspired by his mother, he smells werewolf urine, and seems pretty pleased to have an excuse to put out a werewolf trap. He catches one, and neither Nandor nor Nadjia is particularly pleased with the development. As Nandor explains, “for tens upon tens of years” – which, c’mon, that’s a great joke – a truce has existed between the werewolves and the vampires, and this pretty clearly is going to be a violation of that truce. They set the werewolf free, and surely enough, he comes back with his pack. Nadjia and Laszlo are prepared to brawl then and there, but Nandor, fastidious rule follower that we now know he is, insists on following protocol and meeting somewhere neutral (and away from the eyes of human neighbors). They do so, the battle to be fought by each side presenting a champion and the weapon of their choice. Nandor is the vampiric champion, and the werewolves present a brand new convert, the enormous and roided out Toby. Toby transforms into his somehow even huger werewolf form, and Nandor wisely chooses his weapon – a squeaky toy he then throws off the roof, with Toby tumbling after it. Set: vampires.

Meanwhile, energy vampire and man of two names, Colin Robinson, discovers he has competition in his office when a new employee, Evie, turns out to be an emotional vampire, or about fifty percent of your high school friends on Facebook. She feeds off of telling stories of traumas (most of which have pretty clearly never happened; Colin points out at one juncture that since he’s known her, she has had six grandparents die). The two begin as adversaries, competing to feed off of their office mates, but ultimately strike up a partnership. By the end of the episode, though, they have broken up, with Evie still feeding off of Colin in little gulps.

Three episodes in, What We do in the Shadows is consistently a lot of fun and always very funny. If I am to make a level and objective assessment, my largest complaint is a lack of any kind of serialization. There have, now, been a couple of elements that have been introduced in ways that seem to indicate they will return and have an impact on the continuing storyline that have borne no fruit. I’m not suggesting that a half hour comedy needs to be a grand, unified object, but it would be nice to know, for example, where the Baron is now, and what he’s doing, and if the vamps are continuing to pursue local seats of government. There is a slight sense that everything might be a tiny bit rushed – I didn’t expect Colin and Evie’s storyline to be completely resolved in this episode and yet it was. Also, last week we saw Nadjia turn a woman into a vampire, which is something you’d expect there to be follow up on, as well as Nadjia’s human love interest, from the pilot. Again, it is clearly not necessary for this to be some sort of elaborately plotted, giant serialized thing, but if plot elements are introduced that would clearly have deeper implications to the world we are currently inhabiting, they should be explored and not just completely abandoned.

That said, we are three episodes in. There is nothing that says with any certainty that those things will not be revisited in their own time. We will see. But if the ecstatic high this show reaches is only Matt Berry waxing delighted rhapsodic about his perfect bunny sculpture, well, it’s already surpassed most sitcoms. See you later this week, guys, when my improved and restored immune system will show up on damn time, I promise.