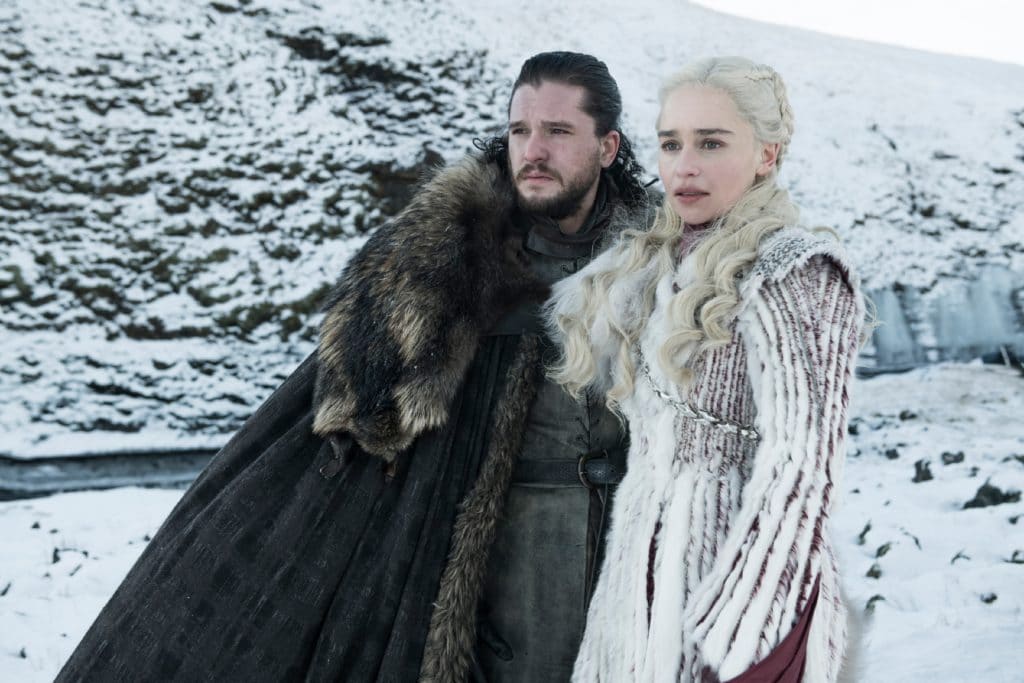 We have gone just about 600 days since the season seven finale of Game of Thrones. Since then I’ve aged more than Melisandre taking off her magic necklace. Now the wait is over… at least for the premiere. We still have a ton of questions that will hopefully be answered over the coming weeks as the drama plays out. But don’t worry, while we fear for the lives of everyone in the realm, Jon and Dany are smooching in the snow having a grand ol’ time. Here’s our recap of the beginning of the end. This episode was called “Winterfell.” Names are hard, guys.

We have to begin with the sleek new credit sequence. Since we don’t have many locales being featured anymore, this makes sense. Winterfell, King’s Landing, and a newcomer—Last Hearth. (That’s the home of the Umbers for those keeping track at home. Most of them were killed already and then the last one we know died tonight. So best we just forget about them.)

The episode features a few moments that mirror the show’s first episode. King Robert’s season one royal procession to Winterfell is replaced with Daenerys and Jon leading the armies, dragons, and a treasure trove of characters we know toward the castle in this one. The northerners aren’t impressed and the great lords and ladies inside the castle aren’t either. They’re mad at Jon for bending the knee. Even though he keeps telling them how like super-duper helpful Daenerys has been. (And also she’s “dayum fine.” I think that’s a direct Jon Snow quote from the show.) Sansa continues throwing shade Jon’s way too. Turns out the Glovers have gone home after Jon’s pledge to Daenerys. As a viewer it feels like we should be beyond some of these political quarrels. The Night King is a-coming.

Most of the episode is filled with character reunion scenes. Some had plot purposes, but mostly they just seem to be meant to remind us of the past relationships. Here’s a quick lightning round to be sure we don’t leave anyone out. Jon is excited to see Bran. Bran is too three-eyed cool to care. Tyrion and Sansa exchange pleasantries. Jon and Arya compare swords. The Hound (almost) compliments Arya. Arya and Gendry give each other googly eyes. They appear to be vibing on each other. Jon and Sam hug it out. More on them later. The episode ends with Jaime and Bran coming face to face for the first time since the tower window back in the pilot.

While wandering around Winterfell, Davos suggests to Tyrion and Varys that our Dragon Queen and King in the North should get hitched. (Although it seems once he bent the knee, Jon is no longer King in the North.) Varys and Tyrion downplay the idea claiming none of them have the influence to convince their leaders. We know Tyrion is already aware of their… partnership. But he doesn’t tell the others. Not that it should be too much of a surprise. Jon and Dany are rubbing elbows and smiling at each other all the time. I went to high school. I know what that means.

While we have all of these fun smaller moments, we do have a few bigger more significant Game of Thrones-ier moments we have to acknowledge. Down in King’s Landing, Euron Greyjoy, the creeper of the Iron islands, delivers the Golden Company to Cersei. The infamous company of sellswords will build up the bulk of Queen Cersei’s army. We don’t hear much about her plans for them. However she is super bummed that they left their war elephants back in Essos. I bet Tywin never brought her to the circus as a kid. That explains a lot. Nonetheless, the Golden Company has 20,000 fighters. Cersei then accepts Euron’s booty call request.

Elsewhere in King’s Landing, Qyburn interrupts Bronn at a brothel to pass on a job from Cersei. She wants him to kill Jaime and Tyrion if they survive the fight up north. That’s just a bothersome development. Ain’t nobody got time for that. On Euron’s ship, while he’s in the capital, Theon and a handful of Iron Born proceed to free Yara quite easily. It was so easy, I wonder why Yara didn’t just do it herself. I mean you’re a hero, Theon. Yay? Yara then decides she is going to sail for the Iron Islands and rule there in case Daenerys needs to escape to an island when the White Walkers kill everyone on the continent. With Yara’s leave, Theon decides to go to Winterfell instead and help defend it.

The episode’s two biggest moments surround Jongon Targarysnow. Or should it be Aejon Snowgaryen? After Daenerys learns that her dragons aren’t liking the cold of the North, she goes to take them for a spin around the block. She also offers Jon the chance to ride Rhaegal. He tentatively accepts. (Yes, the dragon he rides was named after Daenerys’ brother, Rhaegar, who happens to be Jon’s birth father.) The two love-birds then go on a joy ride through the snow, landing nearing a romantic waterfall. The dead are coming, so they better snog while they can.

Later, Jorah introduces Daenerys to Sam as they’re both very grateful Sam took the risk of treating the knight’s greyscale at the Citadel. Unfortunately, the nice chat takes a turn when Daenerys connects the dots of who Sam is and reveals that she burnt his father and brother alive last season. Sam doesn’t exactly take it well. As he goes for some fresh air, he meets Bran. Bran has spent the entire episode staring at various characters like an old man on a porch telling the neighborhood kids they need to get a job. He tells Sam to talk to Jon about the whole parentage situation.

Down in the crypts, Sam does just that. But first he questions Daenerys’ killing of his family members. Jon doesn’t really see any wrong with his queen at the moment. So he takes her side. Sam eventually gets around to the fact that Jon’s name is actually Aegon Targaryen, and the truth that he is the actual heir to the Iron Throne with a better claim than Daenerys.

We’ll wrap up this premiere recap with the small bit of information we got about the ultimate Game of Thrones baddies, the White Walkers and their army of the dead. Tormund and Beric were lucky to survive the destruction of Eastwatch when the Night King took down the Wall last season. Now, on their way south to Winterfell, they investigate the seemingly deserted home of the Umbers, Last Hearth. Inside they come upon Edd, our old pal from Castle Black and some of the Night’s Watch. They are headed to Winterfell also. But first they find poor Ned Umber, the young boy who became Lord of Last Hearth after most of his family died fighting for Ramsay in the Battle of the Bastards. Earlier in the episode Jon sent him home to gather his people to take refuge at Winterfell. That obviously didn’t work out. He has been killed and nailed to the wall among a spiral of human limbs. The boy proceeds to reanimate as a wight and screech like a velociraptor. Beric burns him with his flaming sword igniting the modern art installation around him.

Ultimately we made some progress toward the endgame with this episode, but it’s clear the biggest moments are yet to come. For those who thought season eight would be one giant battle, it appears the Game of Thrones brand of political drama will still feature. But the big standout fact of the week has to be the amount of fan-favorite characters operating in close quarters as the final battle approaches. Man, it’s going to be a bummer when they start getting turned into snow zombies.