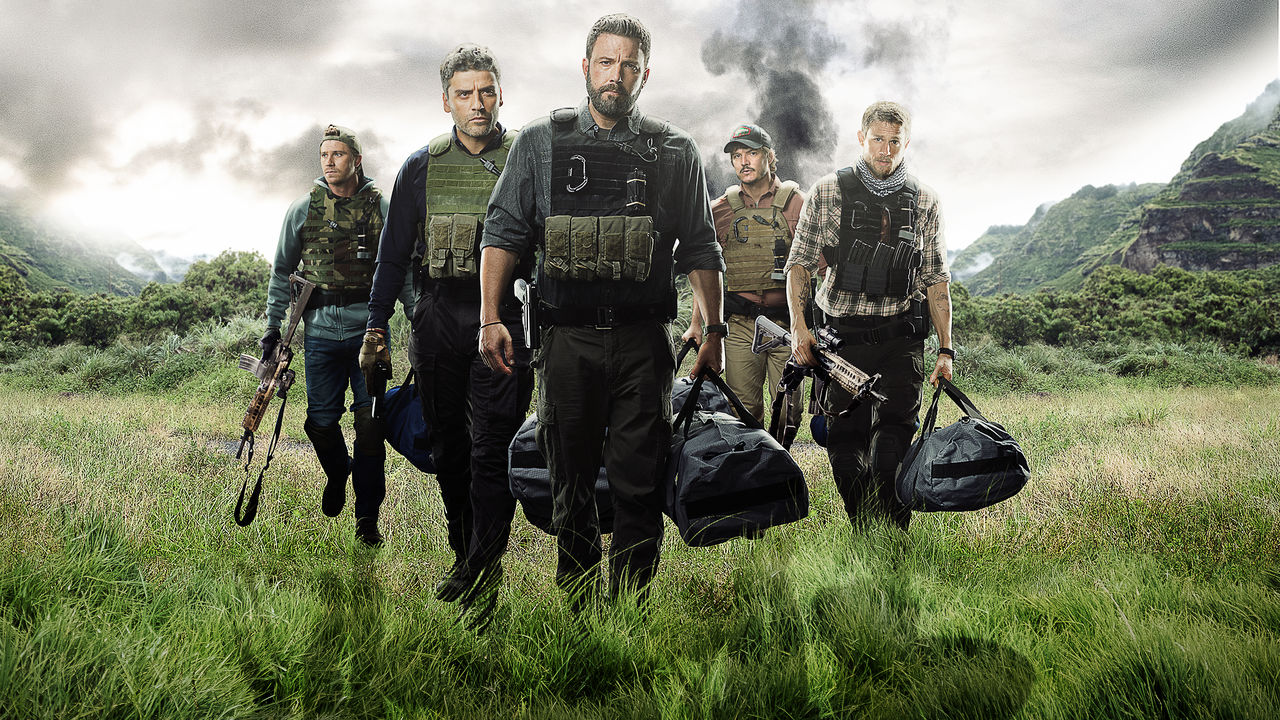 Triple Frontier is a Netflix original movie that the platform released for streaming on March 13. A week before, Netflix had released it in select theaters. It is an action thriller starring Ben Affleck, Oscar Isaac (Ex Machina) and Charlie Hunnam (Sons of Anarchy). Oscar Isaac plays the role of American retired Special Forces operative Santiago “Pope” Garcia, who now works in the private sector as a military consultant helping Colombian authorities fight the drug cartels.

In the field, Pope comes across some information about where infamous drug lord Gabriel Martin Lorea is hiding: a safe house in the jungle. He also learns that Lorea’s hideout is where he keeps all his drug money, a presumed fortune of at least seventy-five million dollars in cash. And so Pope has the idea to recruit his old friends from the Special Forces, all of which are, in one way or another, struggling to adjust to civilian life, to devise and execute a plan to rob Lorea, after which they would be financially set for life.

Obviously, the idea is both risky and illegal. So, at first, Pope doesn’t disclose his intentions. Instead he convinces his old buddies to do the recon work, misleading them into thinking they are being privately financed as consultants helping authorities in the effort to capture Lorea. But once the assessment work is done and a version of an infiltration plan is sketched, eventually Pope confesses that, all along, the whole thing had been the brainchild of his own solo initiative, with the sole purpose of stealing the money, and tries to persuade them to go through with it by themselves.

After pondering and some hesitation, they decide to do it. And so we have ourselves a heist. But, of course, it wouldn’t be a movie if things went exactly according to plan. Now, let’s pause to acknowledge the feeling of déjà vu: Latin American drug lords, elite Special Ops fighters coming out of retirement for one last job, military style operations in the jungle, epic heist action – yes, we’ve seen it before, and not just once or twice. So the question to be asked is: is Triple Frontier mere entertainment? Two hours of your life destined to not stay with you, like countless movies of that genre with those same elements?

Well, it certainly doesn’t intend to be, at least judging by the caliber of people involved in it. Directed by Academy Award nominee J.C. Chandor (A Most Violent Year, Margin Call), Triple Frontier was a project that had been in the works for over a decade (at various points, Tom Hanks, Johnny Depp, Sean Penn, and Christian Bale were rumored to be attached to the project). And, for this movie, Chandor rewrote a screenplay that had originally been written by Oscar-winner Mark Boal (Zero Dark Thirty, The Hurt Locker).

In the beginning, this was Boal and Oscar-winning director Kathryn Bigelow’s project, the two had worked together in Zero Dark Thirty and The Hurt Locker, and Bigelow was set to direct Triple Frontier also, but she eventually abandoned the director’s chair, reportedly over differences with Paramount, the movie’s original backer, which eventually canned the film, until Netflix rescued it by buying its distribution rights. Boal and Bigelow retained executive producing credits, but, aside from Boal’s original story, neither had a creative role in Chandor’s final product.

Certainly, all the aforementioned pedigree is indicative of above average high hopes and intentions for an action movie. It’s not hard to intuit that the aim for Triple Frontier was to somehow classy up the genre. Is that achieved here? It is to some extent, but not completely.

This film is visually very attractive and beautifully shot. The name Triple Frontier translates La Triple Frontera, the Spanish name for the tri-border area of South America where Brazil, Argentina and Paraguay intersect (the general area where the heist takes place). And the cinematography is amazing, with its vivid jungle scenery and ambitious action (spectacular explosions, the color intensity of the tropical forest, an improbable helicopter get-away flight through the Andes).

The adventure side of the script is well written and as muscular as the best of them, but the action is gripping without being implausible: these men are painted as mere mortals, not unrealistic action heroes. The heist-film suspense (the obstacles, the adrenaline, the moments of tension) is also well achieved. However, psychologically, although some interesting and unexpected moral dilemmas occur along the way, this is a movie that doesn’t grab you like you hope it would. The characters are not written intensely enough for the viewer to feel emotionally invested.

Even though Triple Frontier is effective and entertaining as an action movie, it feels like a wasted opportunity to bring new life to the genre. The psychological density is just not there. Taking in consideration what Bigelow and Boal did with Zero Dark Thirty and The Hurt Locker, one wonders what that duo’s original vision could have done for this film, and to what extent this final Netflix product is an adulterated version of that.

If you’re looking for distraction and entertainment in the form of a competent action drama, and you’re in the mood to throw away two hours of your life that you’ll never get back (like I often am), then Triple Frontier will work for you. If you’re looking for something more, this movie will frustrate you. Not because it’s not something more, but because it could have been.