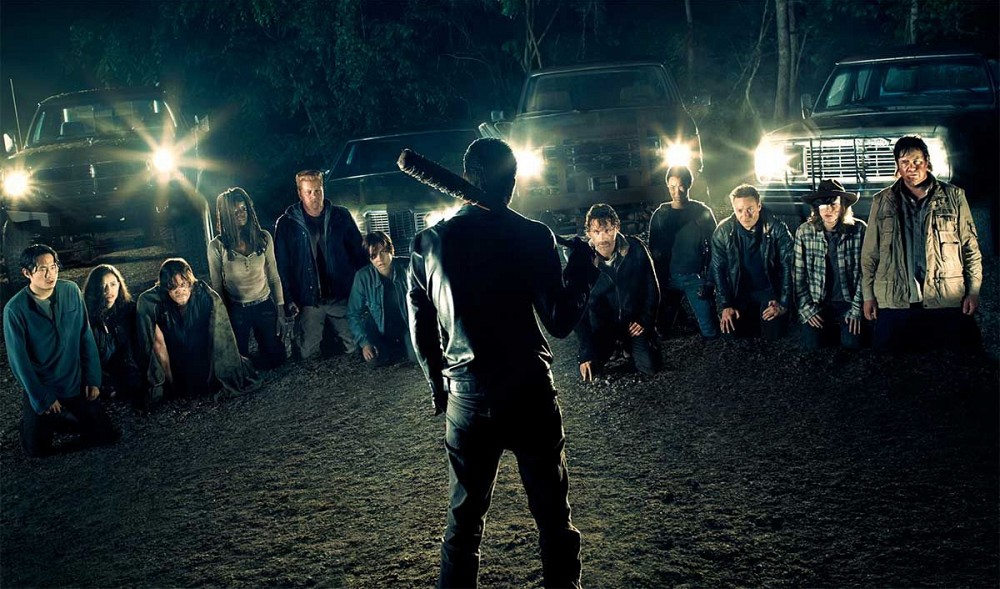 It’s always an interesting game to witness when the cast of The Walking Dead makes a public appearance. The principal cast is a large group and they’re always evolving with new individuals and others meeting their end on the show at every turn. But as a show with an obsessive fear of spoilers, what exactly can they talk about in public? Twelve of those actors and five producers met a crowd of thousands for New York Comic Con on Saturday and unwanted spoilers were nowhere to be found. The conversation instead focused on more pressing matters like new enemies, prank wars, and disobedient hairstyles.

NYCC had a number of popular panels and events over its four days. But it wouldn’t be too much to claim that The Walking Dead was the most popular of all of them. Not only was every chair in the 5,000 seat Theater at Madison Square Garden full for hours leading up to the show, the queue of people hoping for a chance to get in the hall ran thousands deep. Before anyone was introduced, a sizzle reel caught everyone up on the highlights from season six. Then one after another, we saw all of the teaser commercials asking if this was the end for each of the characters being threatened by the new big bad, Negan, in the most recent finale.

After a delay (that darned NYC traffic) the host of The Talking Dead, Chris Hardwick, hit the stage to introduce the large group. Many of the fan favorites were on hand including Norman Reedus (Daryl), Melissa McBride (Carol), Steven Yeun (Glenn), Lauren Cohan (Maggie), and Danai Gurira (Michonne). Negan himself, Jeffrey Dean Morgan repeatedly received large ovations. Hardwick interrupted one exclaiming, “Easy, he’s killing people you love!” Remember the end of season six left us with a cliffhanger. Negan beat one of our group members to death with his bat, Lucille. Who that is, we don’t know. But the internet sure has theories.

Going into the panel, it was advertised that some cast members wouldn’t be on hand. But one name that was listed was lead actor Andrew Lincoln (Rick). The crowd was audibly bummed when he wasn’t introduced. But he did send a letter with Reedus to read to the audience. It began by forcing Reedus to compliment Lincoln and then revealed that other cast members had copies of the letter to make sure Reedus was reading it verbatim. A prank war between Lincoln and Reedus has amused fans for months now. Reedus posted a video online showing Lincoln crank up his car’s air conditioning after a hot day of filming and finding his vents filled with glitter. Reedus shared that the most recent prank perpetrated by Lincoln floated Reedus’ motorcycle out to the center of a lake on a raft.

Most of the hour-long panel went back and forth between stories like that and general comments on how their characters are feeling going into the season premiere. While Michael Cudlitz (Abraham) was flirting with his on-screen love interest Senequa Martin Green (Sasha), Martin Green’s elaborate hairdo came loose to the amusement of her and her cast mates. Austin Nichols (Spencer) offered insight on his character’s loneliness after losing his family and how he was drawn to Rosita. But after one too many unintended sexual innuendos, the crowd wouldn’t let him off the hook. It was one of the funnier moments of the session.

Queen Carol and the First Couple of the Apocalypse

Many of the fans used the opportunity of being in the same room as their favorite actors by showering cheers and applause at every turn. McBride could hardly say anything as the theater praised her every word. Yeun and Cohen were given a lot of admiration as they described the romance between their characters as “classic.” Cohen even put her head on her costar’s shoulder as he spoke. It became clear that the folks involved in the show are as uneasy about the impending death as the fans. Cohen broke down, fighting through tears as she talked about how important the show and its fans are to all of them involved.

Season seven of The Walking Dead promises to be quite an occasion. The crowd was the first to see a scene from the premiere where Rick threatens Negan. It doesn’t appear to end well for Rick. After that, the mood in the room got very tense. Or maybe that was just me. But while things aren’t looking good for the group and we don’t know who gets killed, we know who it isn’t. Hardwick said it should just be a random Alexandrian we’ve never seen before who gets to meet Lucille. Then the characters can pretend to be sad at the loss of “Gary.” It was a joke, but I would definitely be up for a painless resolution like that. Unfortunately it appears like the season premiere on October 23rd will be bloody… and not in a good way.