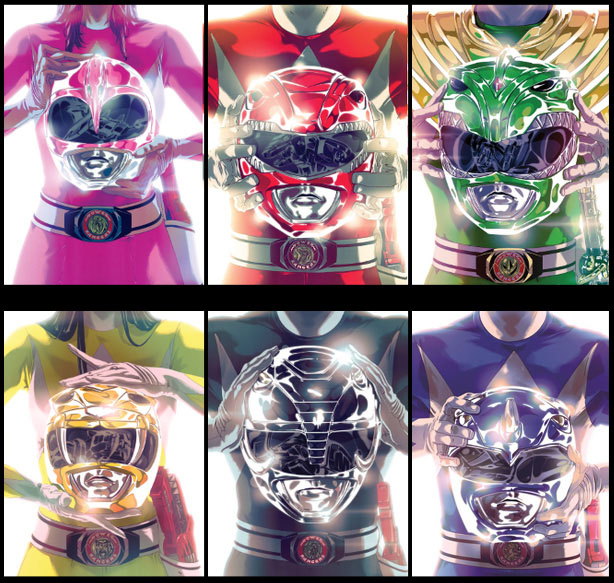 It always surprises me just how popular Power Rangers is at big conventions like New York Comic Con. Sure the television series is on its 23rd season, Power Rangers Dino Super Charge. But fans aren’t dressed like those characters. It’s Mighty Morphin Power Rangers that stands the test of time. This year at NYCC those fans were rewarded with a number of different ways to express their love for a TV show that ran from 1993-1995. There was a Q&A with original cast members, a look into the hugely successful comic book series published by Boom! Studios, and even a sold out Madison Square Garden panel to hear from the cast of the new live action movie coming in 2017. Life’s never been better for the team of teenagers with attitude.

It’s been over 20 years since Saban Entertainment took footage from the Japanese show Kyoryu Sentai Zyuranger and mixed it with American actors and new plots to create Mighty Morphin Power Rangers. We all know about the success that followed. That influence was still clear when two of the original cast members from that first season appeared at NYCC. David Yost (Billy the Blue Ranger) and Walter Jones (Zack the Black Ranger) made their presence felt over the four days at the convention. Autographs, photo ops, interviews, and a panel on Sunday that was standing room only. And yes, the crowd may have sung the theme song aloud before they hit the stage.

The duo discussed stories from their time on the show. One of the most memorable included Jones with Jason David Frank (Tommy the Green Ranger) and Austin St. John (Jason the Red Ranger) breaking free during a lesson on how to ride ATVs for the show. They were meant to take it easy, but Frank sped off and rode up a hill disappearing from sight. St. John and Jones followed suit. They thought he rode right off a cliff.

Sure enough Frank survived and was actually also at the con this weekend. But he was promoting a different project, so he didn’t make an appearance at the panel Jones referred to as the “OG Rangers.” The duo also talked about what they’ve been up to in recent years. They have a movie coming out called, The Order, which stars a cast of all former Power Rangers. They also showed their excitement for the new Power Rangers movie and the comic book series.

Boom! The Return of the Power Rangers

Speaking of the comic book series, Boom! Studios launched a Mighty Morphin Power Rangers ongoing comic in January of this year. The title has generated plenty of interest in that time with sold out variant covers and a spin off series taking shape. The stories include the original cast of characters that bare a resemblance to the original actors (Yost and Jones included). The comic book platform allows the writers and illustrators to go above and beyond what the small budget of the 90s show could allow. At a panel on Sunday morning at NYCC, those responsible for the comics talked about the title’s appeal. Picking a favorite Power Ranger was compared to choosing your Hogwarts house before Harry Potter. For that reason, the first issue of the series featured variant covers with each Ranger color featured.

You really get the impression that these folks care about the impact the series has had on fans. Continuity came up repeatedly. The group makes sure all the mythology and canon of the original show is respected in the comics. With that being said, the series does update that timeline. The characters use cell phones, their personal lives are more thoroughly developed and gaps in the timeline are filled in. For example, Mighty Morphin Power Rangers: Pink is a series following Kimberly the Pink Ranger and her struggles and successes. The comic is a way to get new Mighty Morphin Power Rangers stories with the original characters.

A more traditional reboot is in store with the 2017 film from Lionsgate, Power Rangers. The cast took to the stage at the Theater at Madison Square Garden on Saturday for a sold out panel discussing the new movie. While the actors have the names and general qualities of their TV show predecessors, the group isn’t color coated by race as was controversially done in the 90s. But the group is incredibly diverse with the five main actors coming from four different countries.

Director Dean Israelite described the film as a “character driven origin story.” The teaser shown to the crowd backed that up. The group comes together at a Breakfast Club-like Saturday detention session before finding the power crystals that would make them Power Rangers. The group discussed their quick bond as friends off camera as well as the importance of merging practical elements with computer generated imagery. Apparently the zord cockpits were built to move and react as if the group were actually in 100 ft. robots fighting massive space monsters.

At the end of the panel when the crowd got one more look at the teaser video, the cast stood up to watch with their arms around each other. While these are actors, that moment showed the appeal of the brand. The Avengers and The Justice League are individuals who come together as teams when needed. But the Power Rangers are exclusively a team, which is fun to watch play out on TV, in comic books, and in film. If you’ve forgotten about that kids show from the 90s, you’ll soon be reminded because the Power Rangers appear to be back.