Home Entertainment Vinyl Me, Please September Edition: Glass Animals ‘How To Be A Human Being’
Entertainment 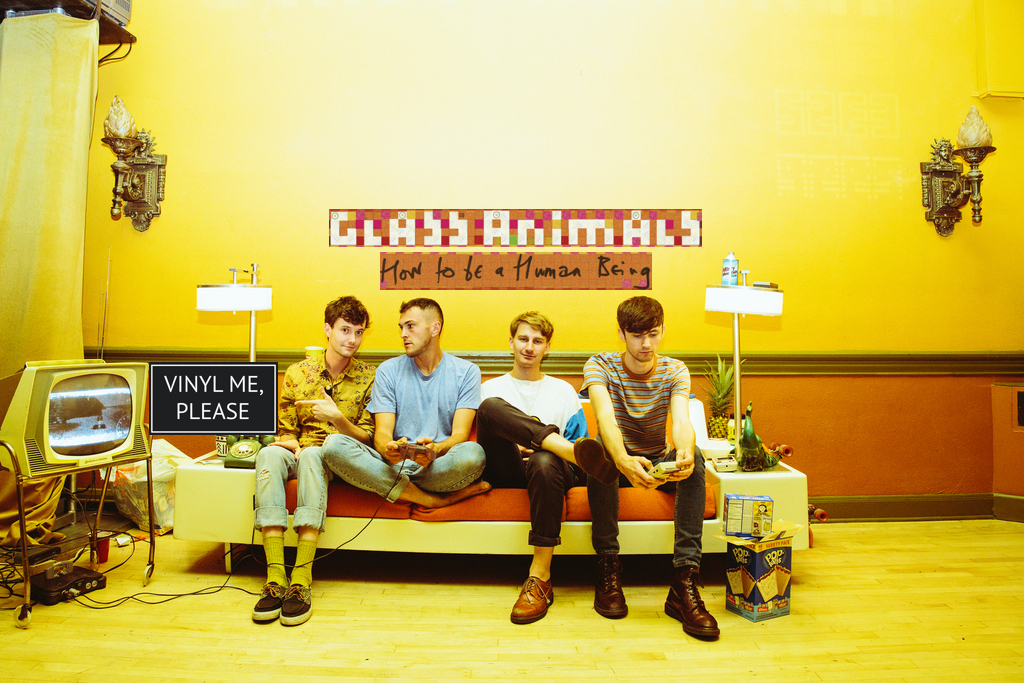 Here’s how it works. You supply Vinyl Me, Please with $23 a month and they supply you with one meticulously selected album worthy of your time and attention. Stupid easy, right? Each custom pressing (often in color!) also comes with special features like original artwork and even a recipe for a companion cocktail. There’s also the chance to get some of the free swag that the VMP team dishes out with alarming regularity. Best of all, you get access to the VMP members-only store. The store is now open, giving you the chance to grab a copy of previous VMP selections from the archives – including August’s gorgeous release of My Morning Jacket’s ‘Z’ – plus additional rare and exclusive releases. And there’s more goodies on the way.

This month’s store features folkie experimentalist Devandra Banhart’s new album, Ape in Pink Marble (ltd. to 500 copies and comes in translucent purple marble), Bon Iver’s much hyped 22, A Million and a reissued mid-90s classic in supergroup Temple of the Dog’s grungy self-titled release. And if you’ve got $200 burning a hole in your pocket, there’s a sick 13 LP David Bowie box set collecting his releases from ’74 – ’76. Call yourself a Bowie fan, do ya? Here’s your chance to prove it.

Me? I’m drooling over Norwegian songstress Jenny Hval’s latest, Blood Bitch. Hval’s music is dark and dirty and spooky and sexy. But’s it’s also fearless and hyper-intellectual. It’s not for everyone. But one day it will be. And you owe it to yourself to get in on the action now. Why not do it with a 2 LP limited release (500 copies) on clear wax with pink swirls? Do it.

If you’re still on the fence about signing up, just know that VMP’s Swaps Program is in full effect. That means you can flip any record you don’t like for something a little more your speed. And if you want to discuss the matter face to face with fellow VMPers, keep an eye out for VMP’s road-show, The Spins. They may be coming to a bar near you in the very near future. But don’t overthink it. Do yourself a favor and sign up today.

Before you do, let’s have a look at what’s inside this month’s box. If you haven’t been paying attention, the album is ‘How To Be A Human Being’. And it comes by way of Oxford, UK electro-maestros Glass Animals. Now who’s ready to get down? And yes, you will get down. ‘Cause the songs that comprise How To Be A Human Being toe a spirited line between synth-pop psychedelia and hip hop hysterics. The band kicks off the jams with a stone-cold slacker anthem in ‘Life Itself’. Big and boisterous and fueled by powerful, primal beats, ‘Life Itself’ feels like a blast of energy sent to Earth from outer space. To say that it sets the tone for the songs that follow is an understatement. ‘Life Itself’ is the tone. And Glass Animals charge forward with a booming mix of indie-pop hubris and youthful abandon.

Speaking of youthful abandon, you’ll find plenty in How To Be A Human Being‘s break-pumping second track ‘Youth’. Less a full on party jam than its predecessor, it still builds on the opener’s energy with slick beats, wavy synths and a simple but groovy bit of guitar work from frontman Dave Bailey. It’s a subtle bit of song craft that knows when to go big and when to go chill. And that’s true of every track on How To Be A Human Being. Particularly on the eight-bit slow jam of  ‘Season 2 Episode 3’. But the Super Mario synths and do-wop vocal tracks that lend ‘Season 2 Episode 3’ its cool only serve as a preamble for another booming bit of pop. And Glass Animals waste no time bringing that boom in the form of ‘Pork Soda’. The hook-laden stunner features big beats, big synths, sweeping guitars, and even a magical bit of sitar psych. It’s a perfectly orchestrated, flawlessly produced slice of pop. And its easy to imagine legions of fans will be waving their hands and screaming the song’s infectious chorus at the top of their lungs at live shows.

‘Pork Soda’ is so good, in fact, that it’s almost impossible for Glass Animals to follow it with equal intensity. And the album’s bustling energy does flag a bit in its wake. But that’s ok, the band finds their groove soon enough in the trip-hop frenzy that is ‘The Other Side Of Paradise’. And they find their guitars on the beautiful and bluesy ‘Poplar Street’. Like all great blues songs, ‘Poplar Street’ tells a somber story of loss and regret. And if you were paying attention to the songs that precede it, you may have noticed a similar narrative bent to each. That anecdotal approach makes How To Be A Human Being a concept album of sorts. But it’s not concerned with telling the story of a single being. Rather, every song on the album tells a separate story. Tales of missed chances, lost loves, underachieving gamers and lowly waitresses abound through How To Be A Human Being‘s 11 tracks. Together, they form a kaleidoscopic family album of humanity at a singular time and a singular place. That time and place is right here and right now. And that’s just where Glass Animals want you to be.

If How To Be A Human Being is a family album for humanity, then why wouldn’t the cover reflect that family in its countless states of absurdity? 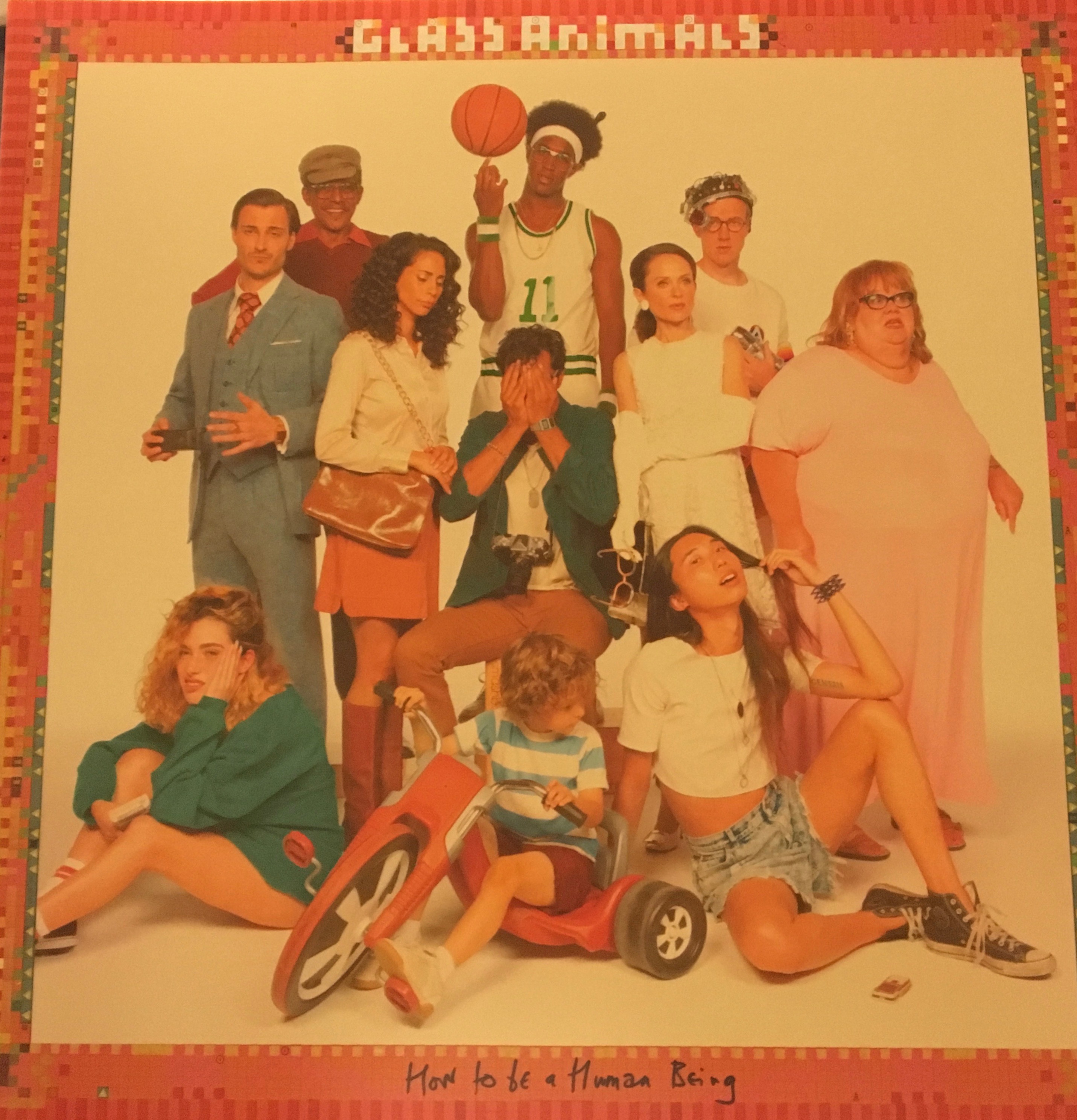 Before you rip open that shrink-wrap and start digging through the sleeve, take note of the all-important info on this sticker. Another month, another Exclusive Pressing from team VMP. Well done, guys.

As always, the album comes wrapped in a half-sleeve chock full of important info – like the artist’s name and the album’s title. You’ll even get the initials of the VMP Staffer who handled your disc. Thanks for the love, MH. 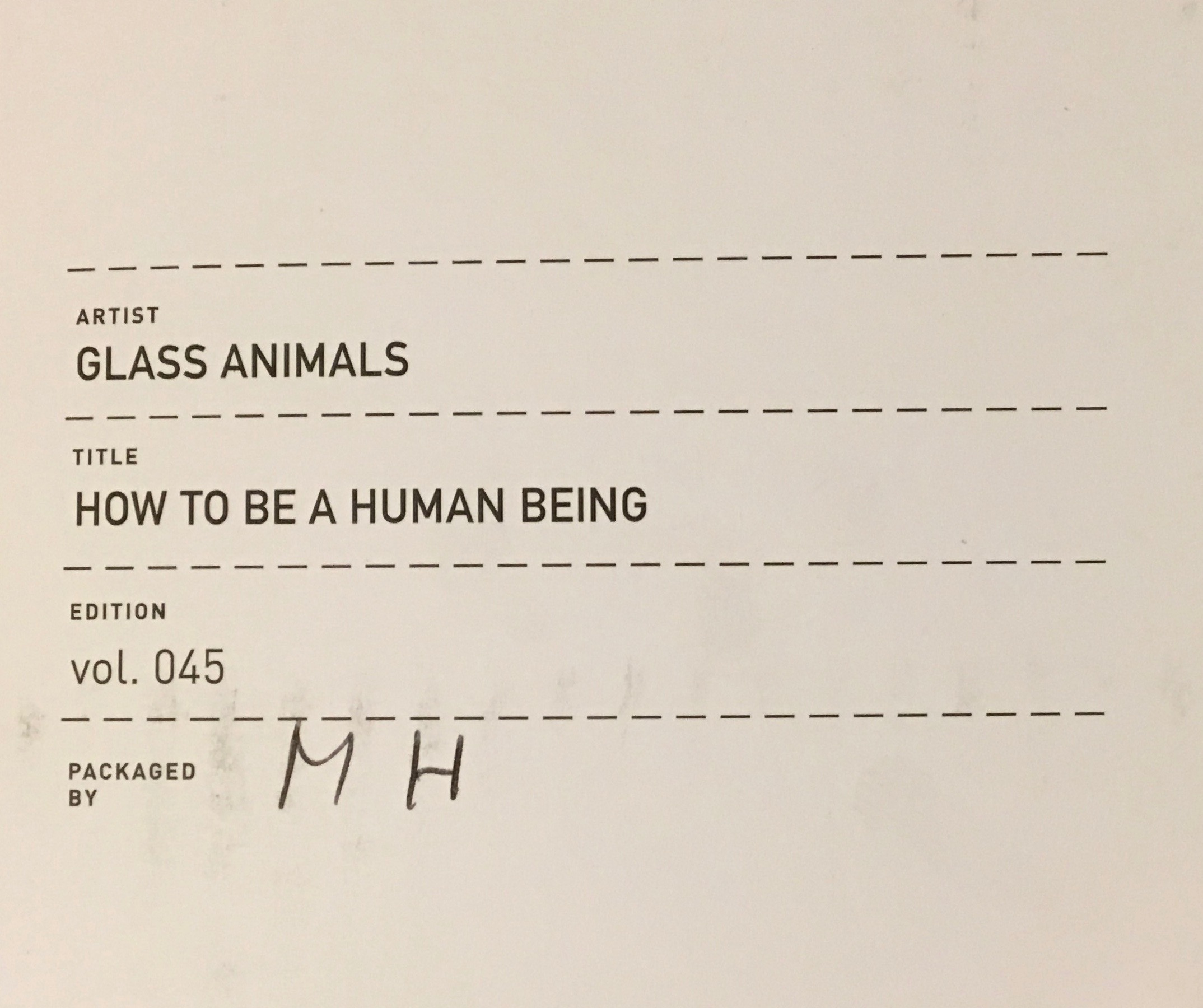 Don’t overlook How To Be A Human Being‘s companion cocktail, the Pork Soda. Sadly, it has nothing to do with Primus’ early 90s rocker. It’s just a fancy name for a pineapple jalapeño margarita. And one look at the recipe will tell you that … it’s a little complicated. Like chili powder and pineapple wedges and jalapeño slices complicated. Still, it is named after Glass Animals’ near perfect pop song, so I’m sure it’s tasty.

You’ll find a couple of hidden gems in the box too – like these super kind words from VMP’s own Tyler Barstow explaining why they chose How To Be A Human Being. You’ll also find a tag-teamed 12″x 12″ print from LA based multimedia whiz Ashten ‘Whoopi’ Winger and Ukranian pixel painter Mykola Dosenko. It’s a full eight-bits of awesome and cleverly matches Glass Animals’ blippy vibe. 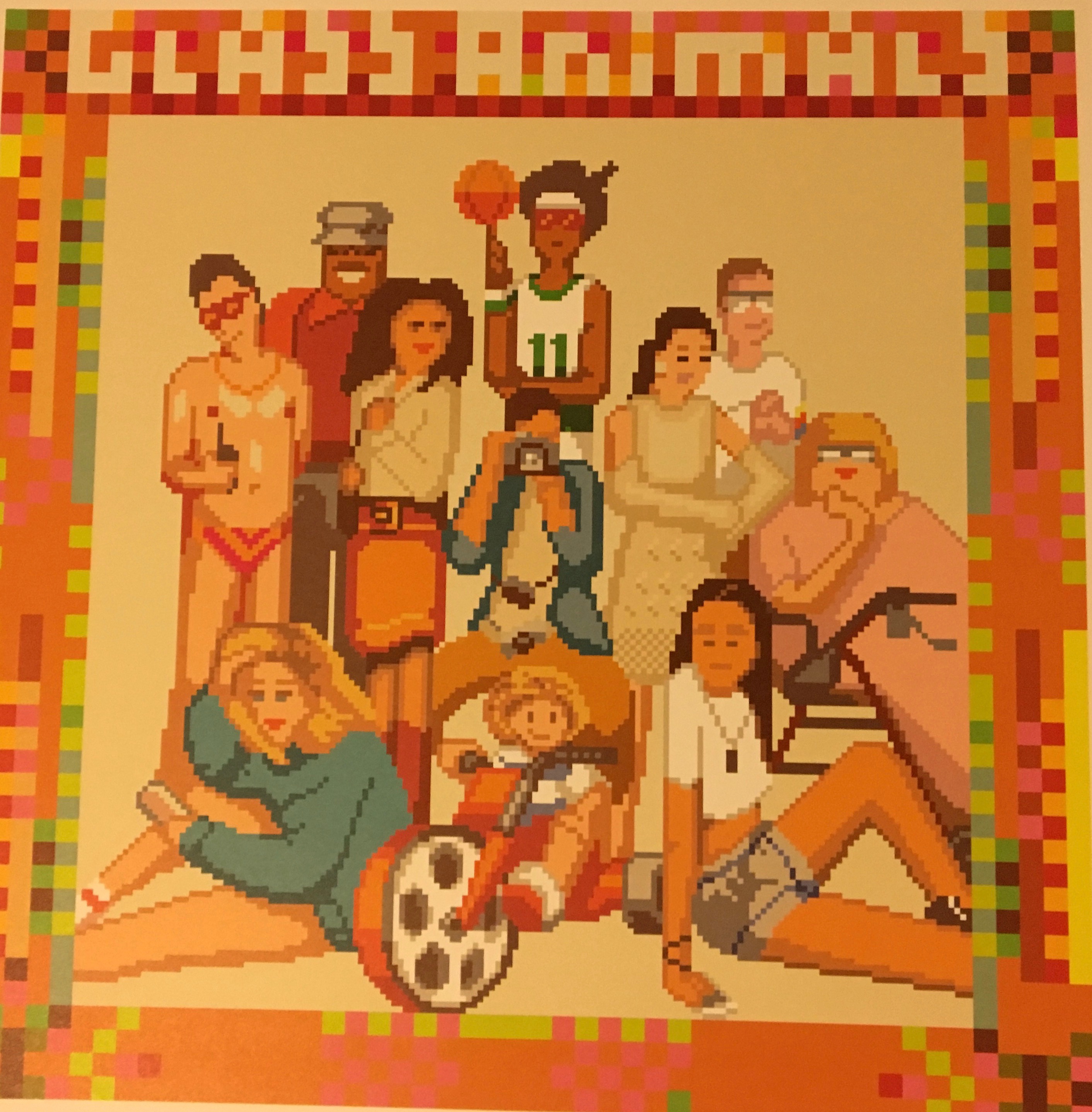 You’ll also find a little teaser for what’s coming to the VMP Members Store this month. Yes, there’s a shiny new pressing of the soundtrack to Jackie Brown. And yes, you need to own it. ‘Cause everyone should know how much you like The Delfonics.

Don’t overlook that gatefold, ’cause it’s kind of genius. Every family photo needs a frame. So it’s only natural that the gatefold should function as one.

Make sure you check that sleeve carefully – ’cause this little card is buried inside. And on the back you’ll find you’re very own digital download code. Trust me, How To Be A Human Being is gonna sound great in your headphones.

Before you dig that record out of its sleeve, have a gander at this nifty 12″ X 24″ fold out poster.

And don’t forget to flip it over for a full lyric sheet and even more pictures. Anybody else think these guys used to work as set decorators for West Elm photo shoots?

Now, let’s have a look at that wax.

If blue is the warmest color, then this coral blue is on fire. It’s gonna look all kindsa hot on your deck too. But not quite as hot as it does my red one.

How’s it sound? Like you’ve been up all night playing video games with strangers. You pry yourself off the couch and head out into the world in search of eggs and waffles. You step out the front door and see the sun on the rise. You throw on a pair of shades and stuff your earbuds into you ears. You hit shuffle on your iPod and beats begin pumping the blood through your body. You shove your hands into your pockets and walk off into the growing, golden haze.

I’d never heard of Glass Animals. And I had no idea what to expect when VMP announced their album as the September feature. But How To Be A Human Being is stylistically complex, lyrically incisive, and bustling with an energy lacking in most modern pop albums. It’s not my favorite disc that Team VMP has selected, but it is another score from my dearest deck divas. And yet another album that I wouldn’t have heard without them. Thanks, VMP for sending it my way. And thanks for making every new selection an adventure … ’cause that’s the whole point of music.

A big THANK YOU to our friends at Vinyl Me, Please for sponsoring this subscription. Don’t forget to check out the official Vinyl Me, Please website and sign up to get some choice wax delivered right to your door each month! Can’t wait to see what crunchy treat they send our way for October.