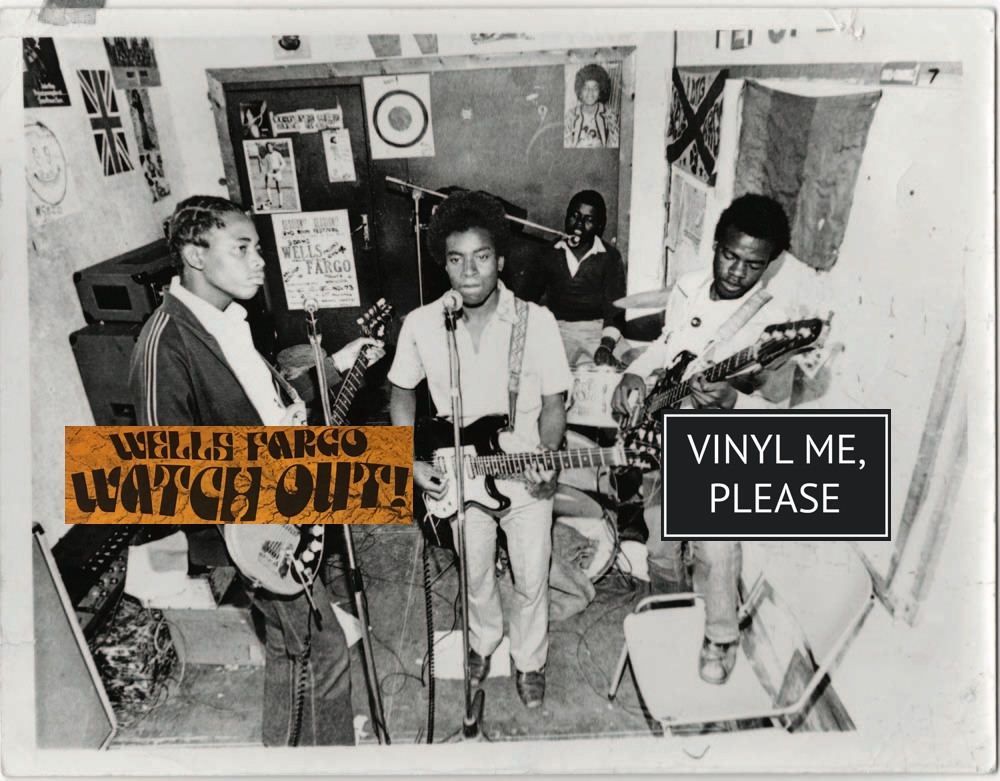 Good things come in 12 inch packages. Delivering limited edition pressings of new and classic albums directly to your doorstep, Vinyl Me, Please operates under a simple philosophy: The Album Lives. With a carefully curated catalog of new and hard to find releases, the subscription service is more than just a record club … it’s a lifestyle choice for folks who wish Record Store Day could happen every month. In their living room.

Here’s how it works. You supply Vinyl Me, Please with $23 a month and they supply you with one meticulously selected album worthy of your time and attention. Stupid easy, right? Each custom pressing (often in color!) also includes tons of special features like original artwork and even a companion cocktail recipe. There’s also the chance to get some free vinyl swag that the VMP team dishes out with alarming regularity. Best of all, you get access to the VMP members-only store. When the Member Store opens on June 16, you’ll have a chance to grab a copy of previous VMP selections from the archives – including the May release of Weezer’s Pinkerton – plus additional rare and exclusive releases. This month’s store will feature a dynamite reissue of Parquet Courts’ crunchy classic Light Up The Gold (VMP exclusive in pretty pink vinyl – ltd to 500 copies), a vinyl pressing of Aphex Twin’s spaced out new release Cheetah, John Carpenter’s re-recording of his iconic scores on Assault On Precinct 13 b/w The Fog, and that ridiculous-in-the-best-way Star Wars: The Force Awakens Original Score with holograms. ‘Cause you need holograms with your vinyl. Oh, and if you didn’t hear, sample-happy ’90s-dance maestros The Avalanches almost broke the internet a couple of weeks ago when they announced the release of a new album after a 16 year hiatus. It’s called Wildflower. And VMP will have 2,000 copies of an exclusive pressing on red vinyl. VMP Members take note – THIS DISC WILL NOT LAST LONG. If it’s on your must have list, you’ll want to hit the Member Store early.

If you’re still on the fence about signing up, just know that VMP’s Swaps Program is now in full effect and you can read all about it right here. But don’t overthink it. Do yourself a favor and sign up today. But first, let’s have a look at what’s inside this month’s box. 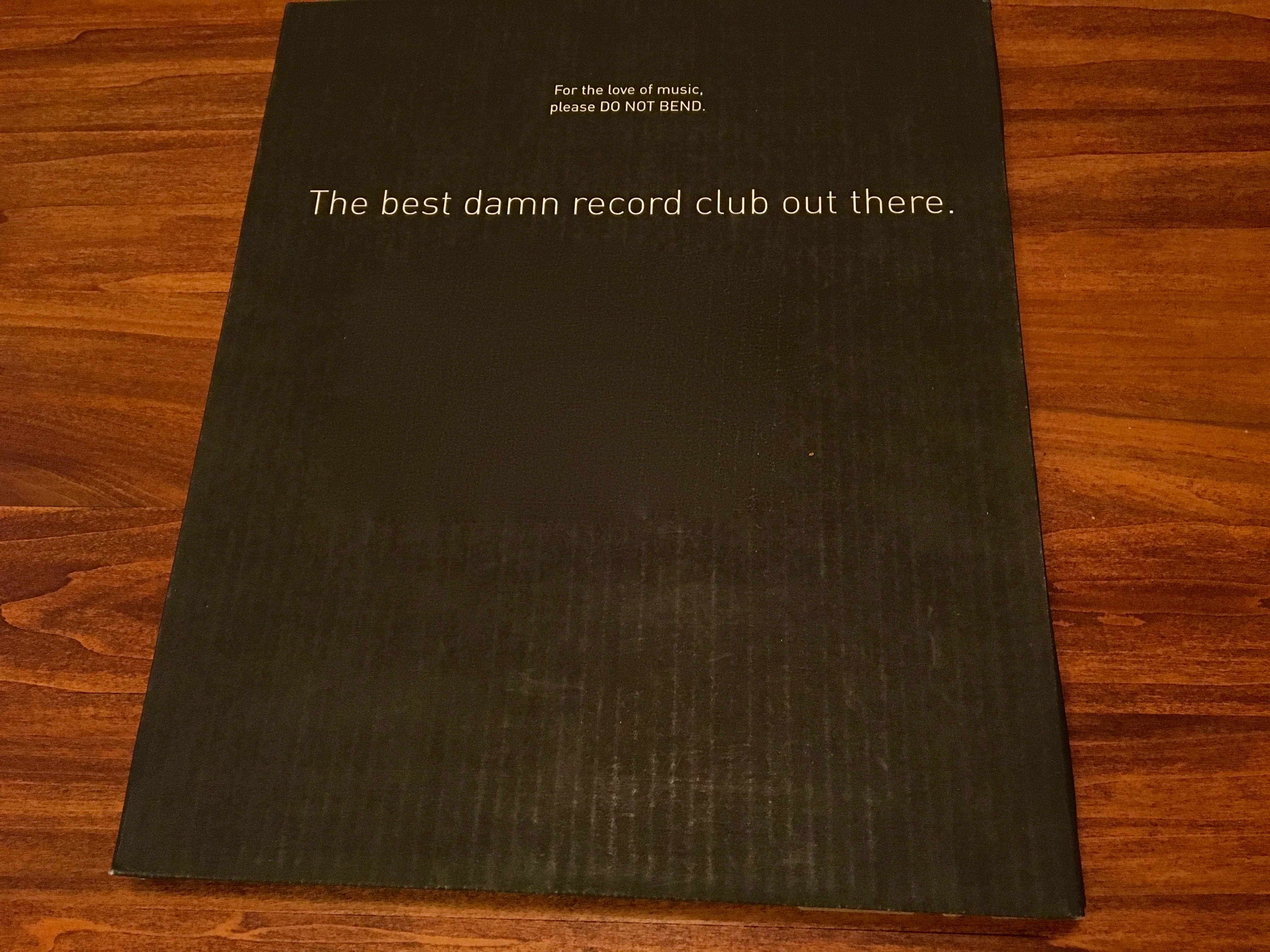 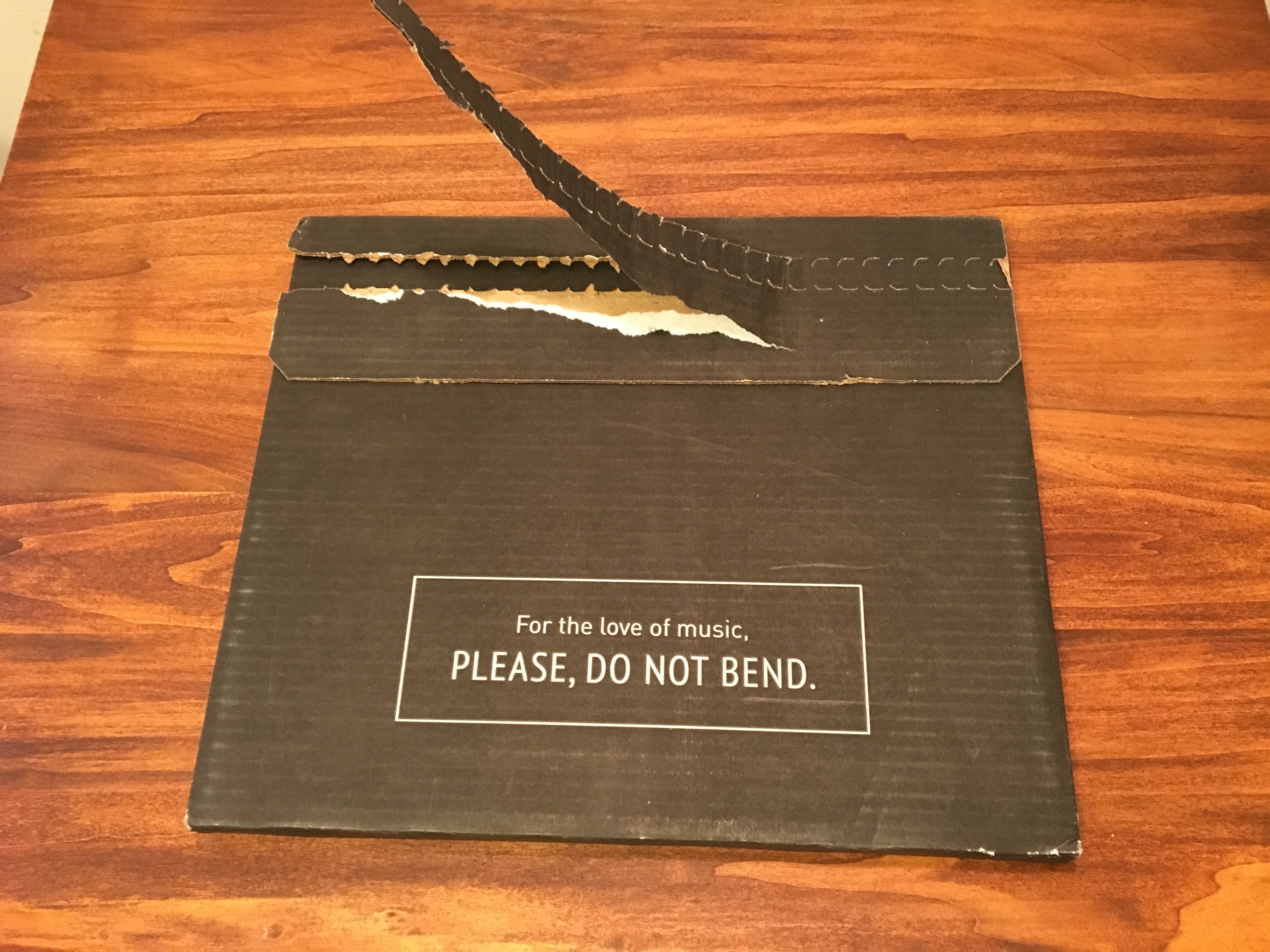 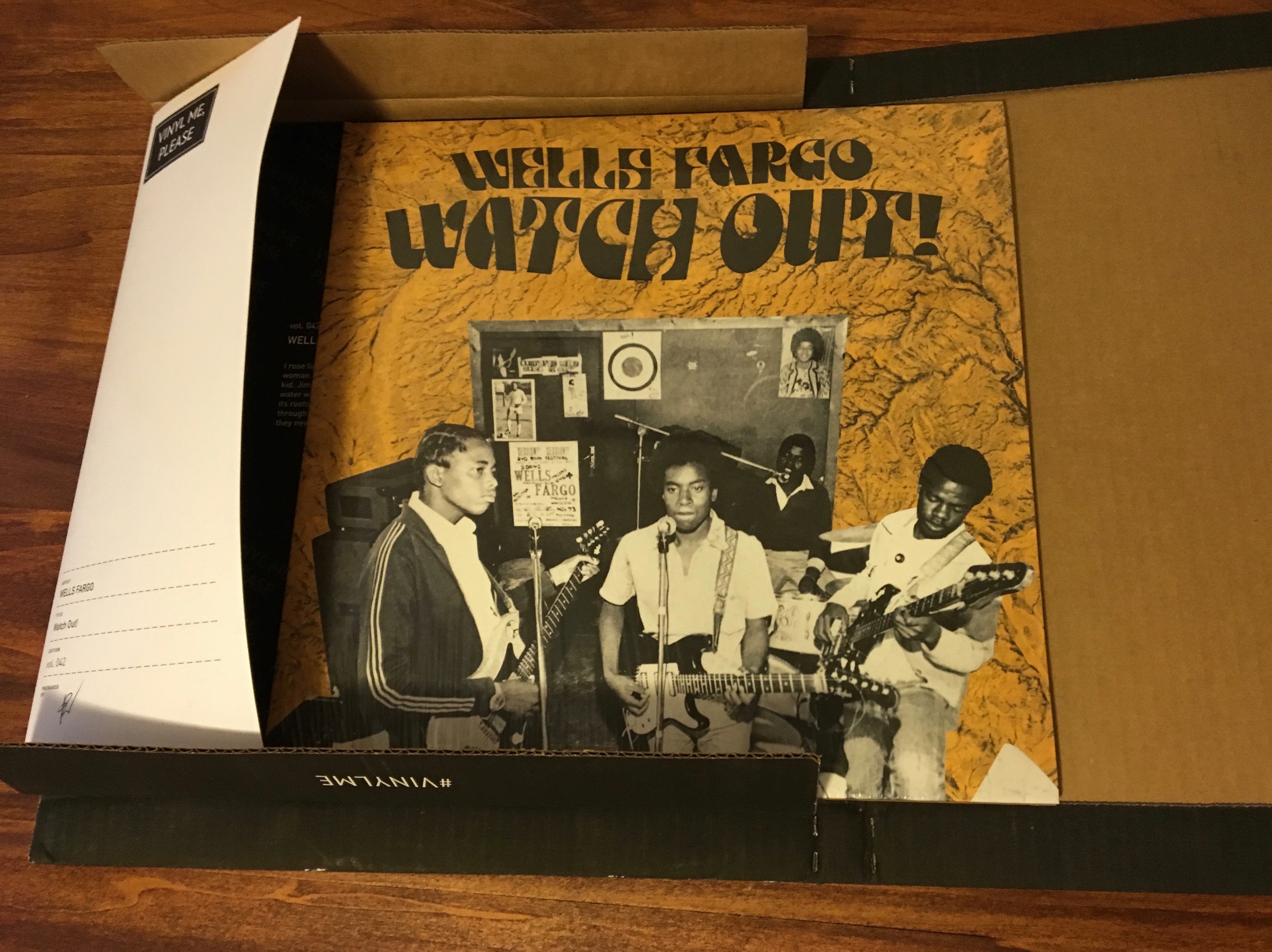 I went shopping in the Members Store myself last month and scooped up a copy of Marisa Nadler’s gorgeous new album, Strangers. You you may want to track down a copy for yourself, ’cause it’s one of the best albums you’ll hear in 2016. 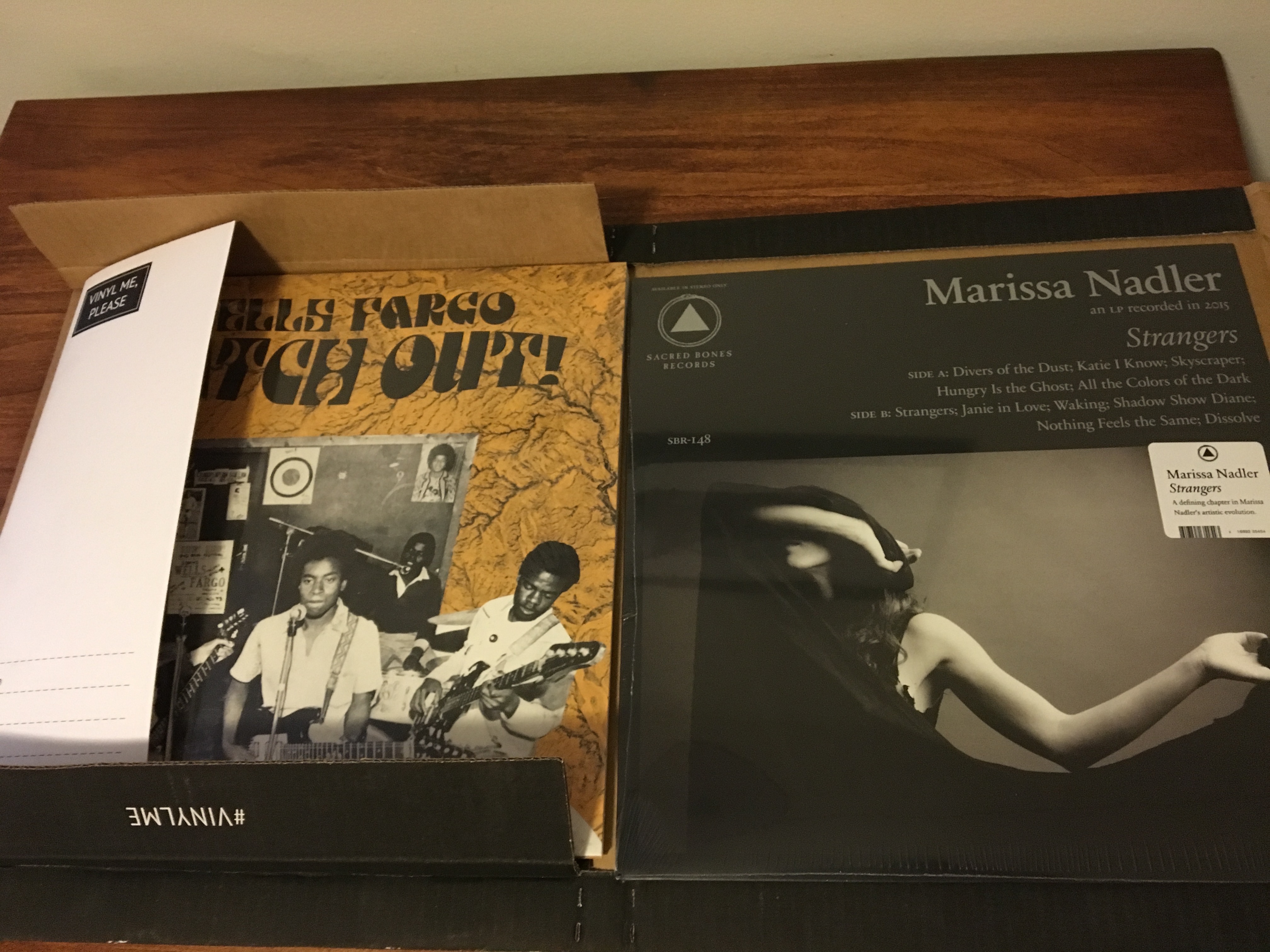 Now, on to June’s release, Watch Out! by Wells Fargo. And boy, did the Vinyl Me, Please team dig deep for this one. Go ahead and raise your hand if you’ve ever heard of these early ’70s purveyors of Zimbabwe styled ‘Heavy Music’. No one? Yeah, me neither. And that’s ok. You don’t know it yet, but Wells Fargo is the greatest band you’ve never heard of.

In the final decade of Zimbabwe’s turbulent war for independence, the country lay divided with many citizens still at the mercy of an oppressive foreign government. Caught in the middle was a generation of young Zimbabweans with no outlet for their voice. Like so many voiceless youths before them, they found their calling in rock & roll. As angry youths began to put down their weapons and pick up guitars, a counterculture movement swept the nation. One led by a call for hope and unity. At the forefront of that movement was Wells Fargo. Driven by the swaggering beats of Elvis Presley and the psychedelic abandon of Jimi Hendrix, Wells Fargo forged a sultry sound as earnest and playful as it was gritty and angry. It was a sound born of the seedy music halls and sweaty garage parties of the real Zimbabwe. A sound built for revolution. A sound that racist Zimbabwean record labels refused to acknowledge. With thinly veiled call to arms anthems like ‘Watch Out!’ and soulful ruminations on perseverance like ‘Carrying On’, it’s easy to see why. Every crunchy riff, psyched out solo, and thunderous beat signaled the sound of their own demise. I can’t even imagine what those label owners made of the raw sexual energy present in a song like ‘Bump Bump Babe’ or the hip shaking ballad ‘The Crowd’. Whether they wanted it or not, a new Zimbabwe was coming. And it could not be controlled. Wells Fargo was the voice of the next generation. Though no label would put out a Wells Fargo album proper, the band still managed to get a handful of 7″ singles pressed. With every new single came another ray of hope for a future of peace and unity. And now, 40 years after the band first started making music, those singles have been collected for the release of Watch Out!. An album out of time, but never out of place.

Like I said – Wells Fargo may be the greatest band you’ve never heard of. But not for long.

Top to bottom, the songs on Watch Out! have a decidedly homegrown feel. It’s only fitting that the cover sees Wells Fargo rocking out in a basement studio. And don’t overlook the stoic resolve on the faces of the band’s members. They already knew how much their music mattered before they ever got out of the basement. And they’re cooler than you will ever be because of that. 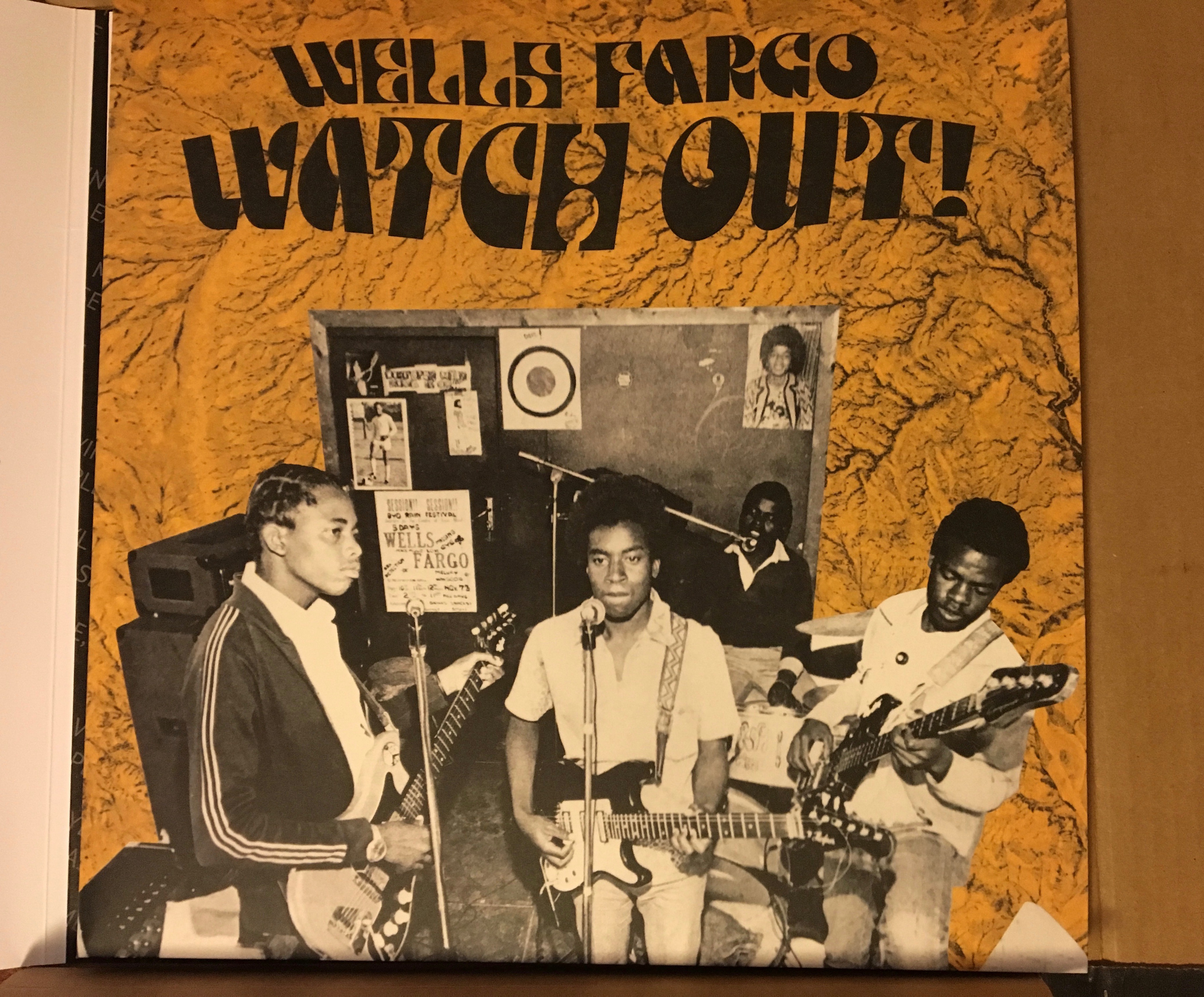 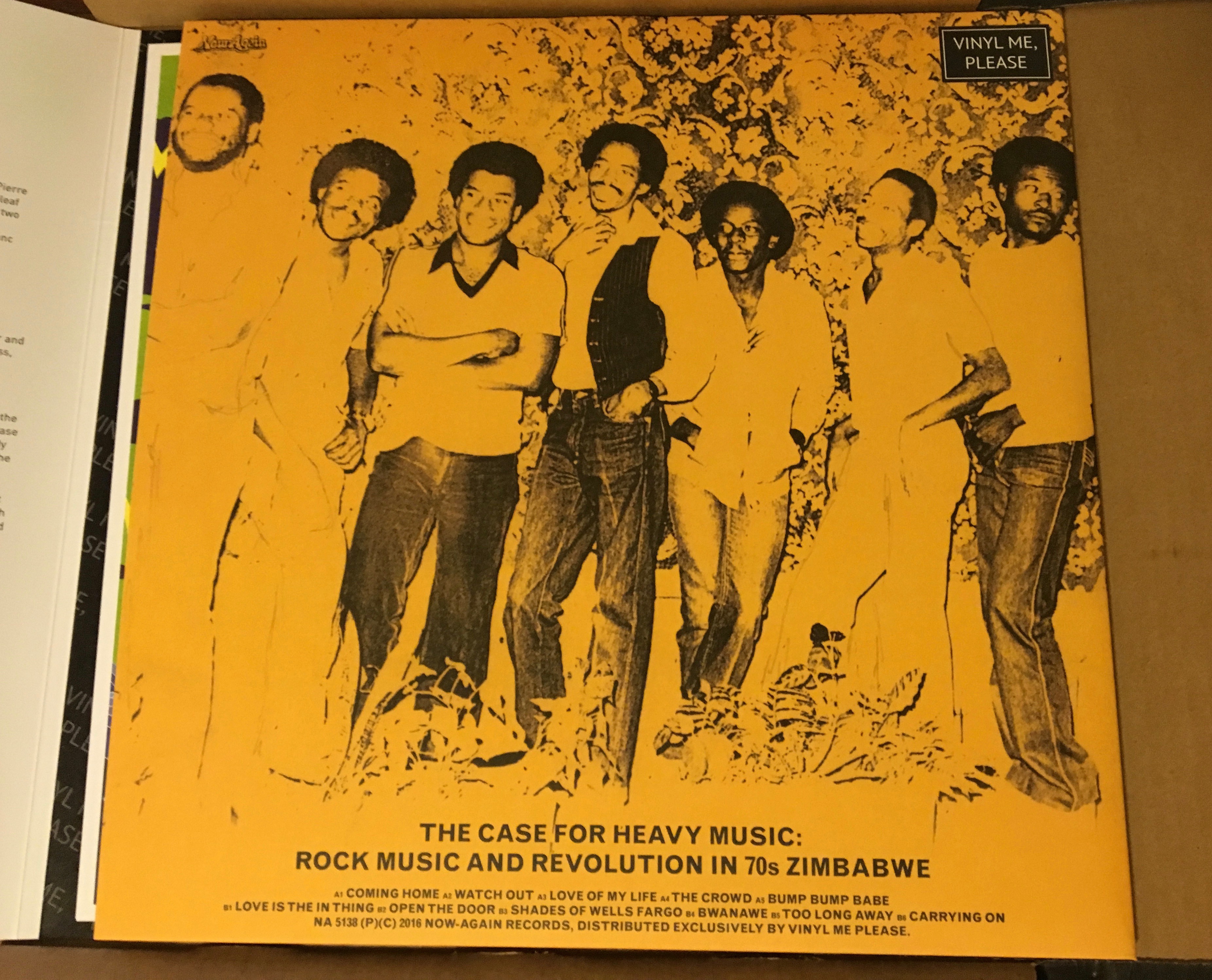 As always, the album comes wrapped in a mini-sleeve chock full of important information. Artist’s name – check. Album title – check. Month of issue – check. They even offer the initials of the person who personally handled your disc. Good looking out, PW. 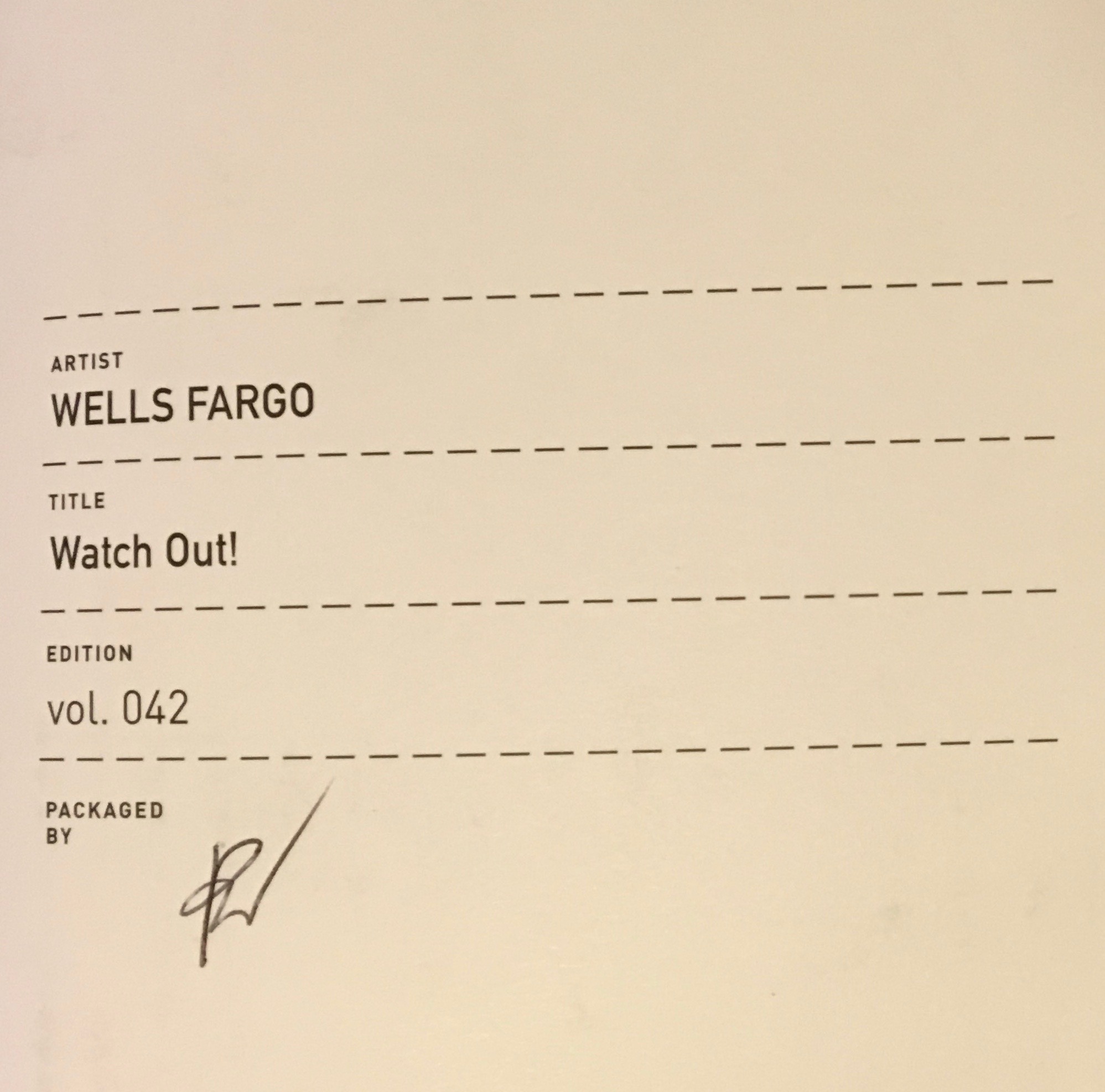 Don’t forget to flip that sleeve over and scope out Watch Out‘s companion cocktail, cleverly called Watch Out! It sounds fruity and bitter and perfect for summer time sipping. 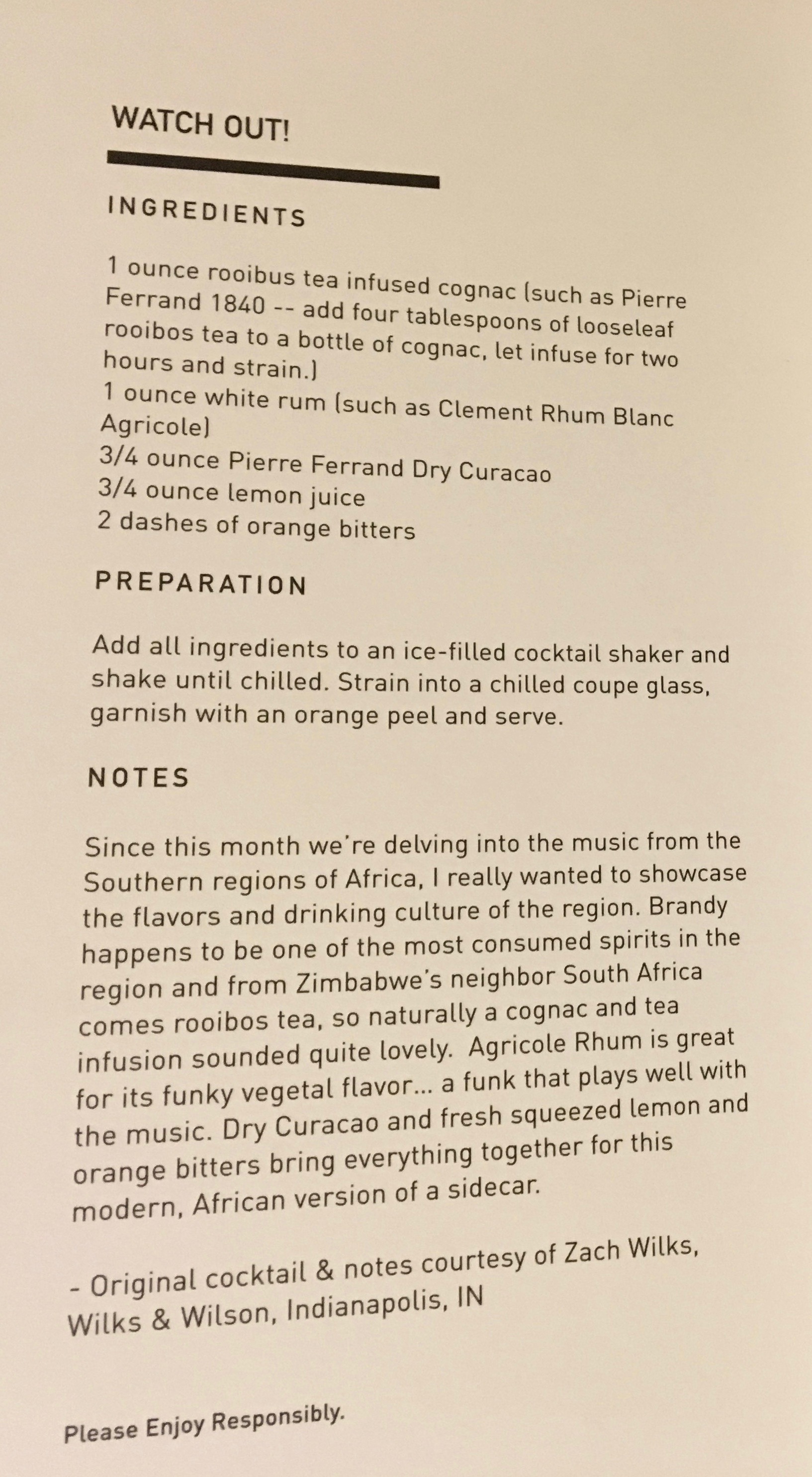 Digging deeper, you’ll find two hidden gems – a bit of poetic rambling from VMP’s own Tyler Barstow and a killer 12″x 12″ print from artist Sangho Kim. It’s a powerful piece of ’70s inspired psychedelia. And a fitting tribute to Wells Fargo’s brand of revolution rock. But I’m more in love with the handy sketch work on the back. 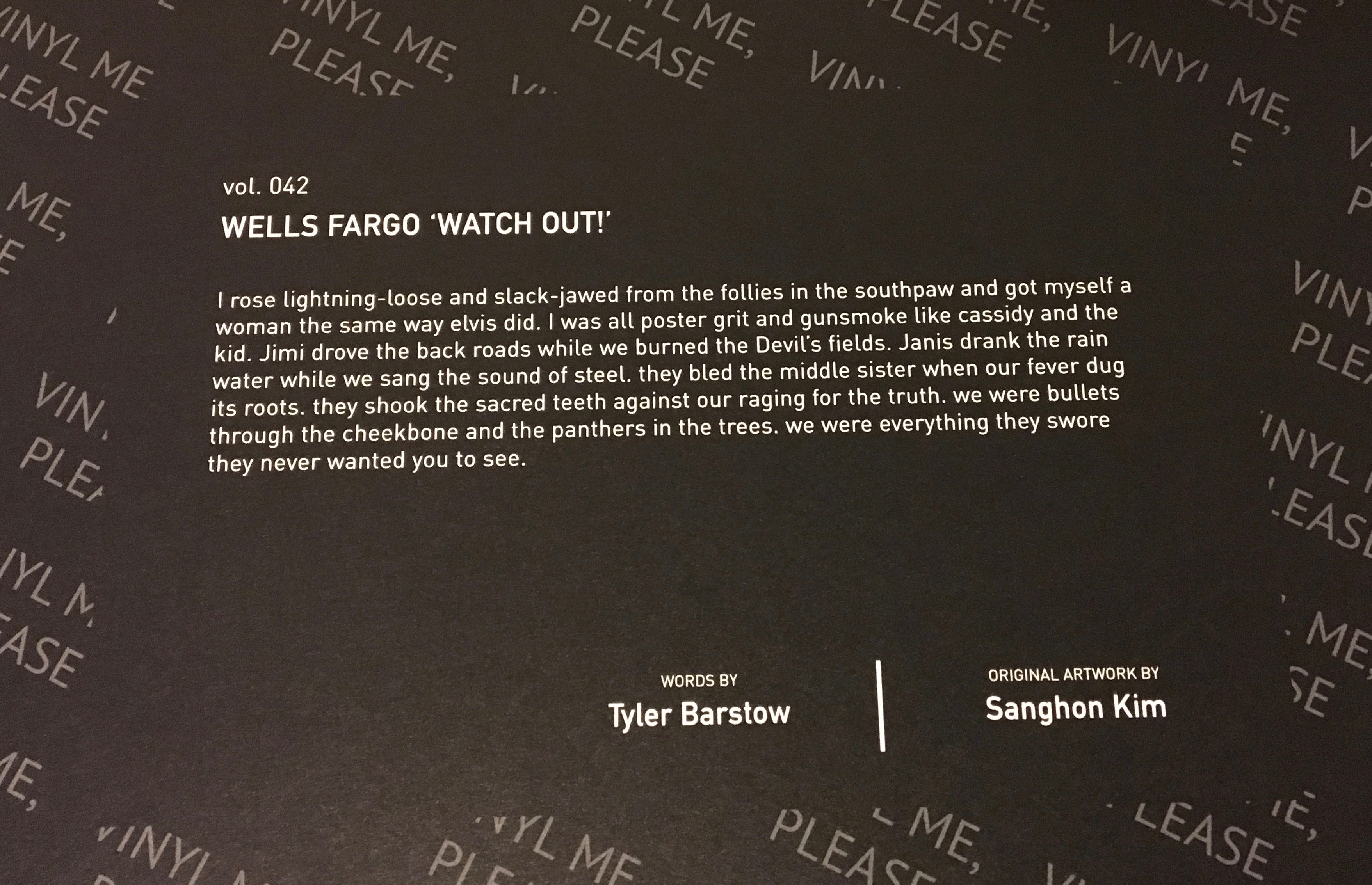 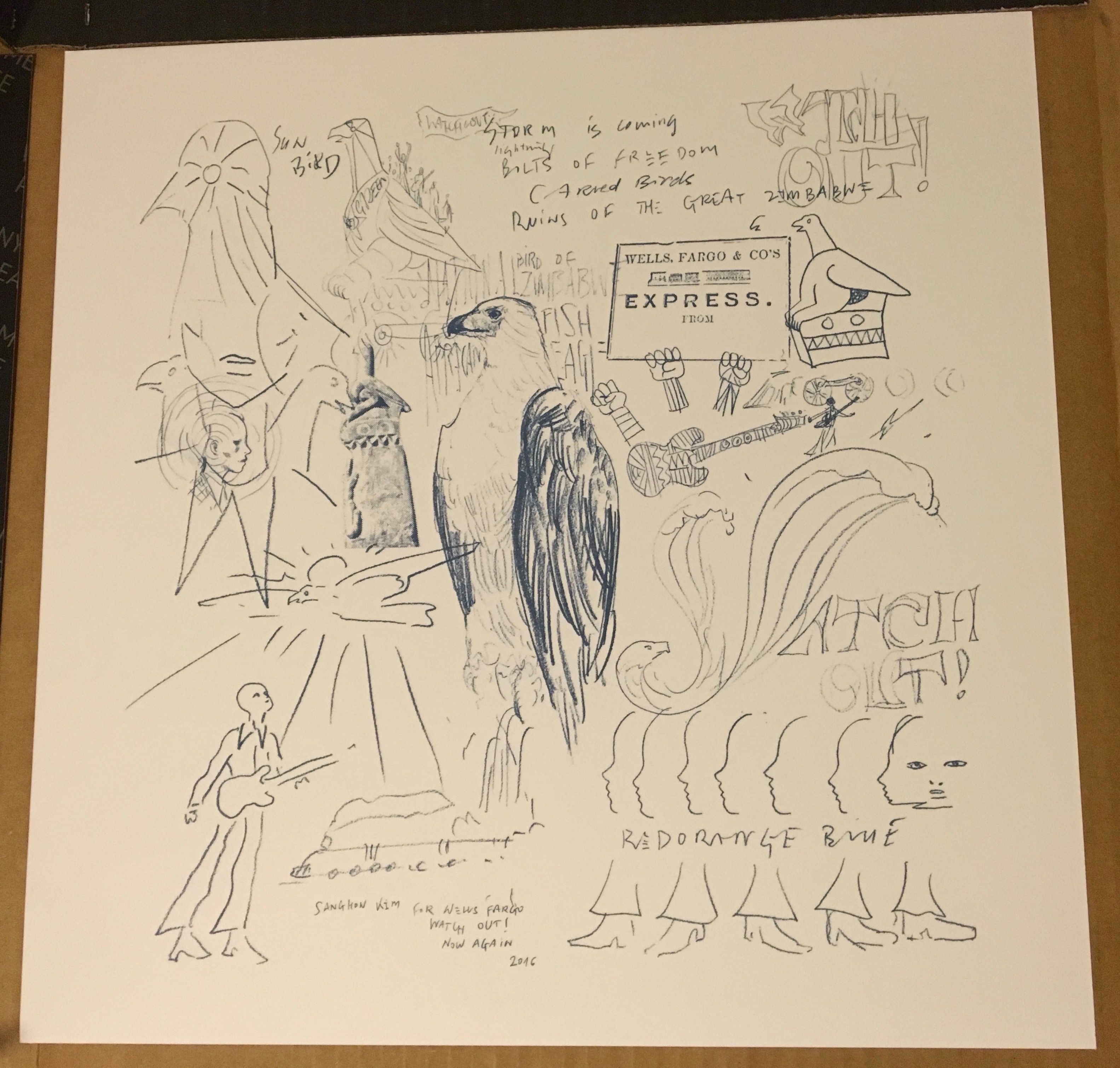 You’ll also find a little teaser for what’s coming to the VMP Member’s Store. Did I forget to mention that VMP Exclusive pressing of Kurt Vile’s bedroom-rock classic Smoke Ring For My Halo? Hmmm. Must’ve slipped my mind. 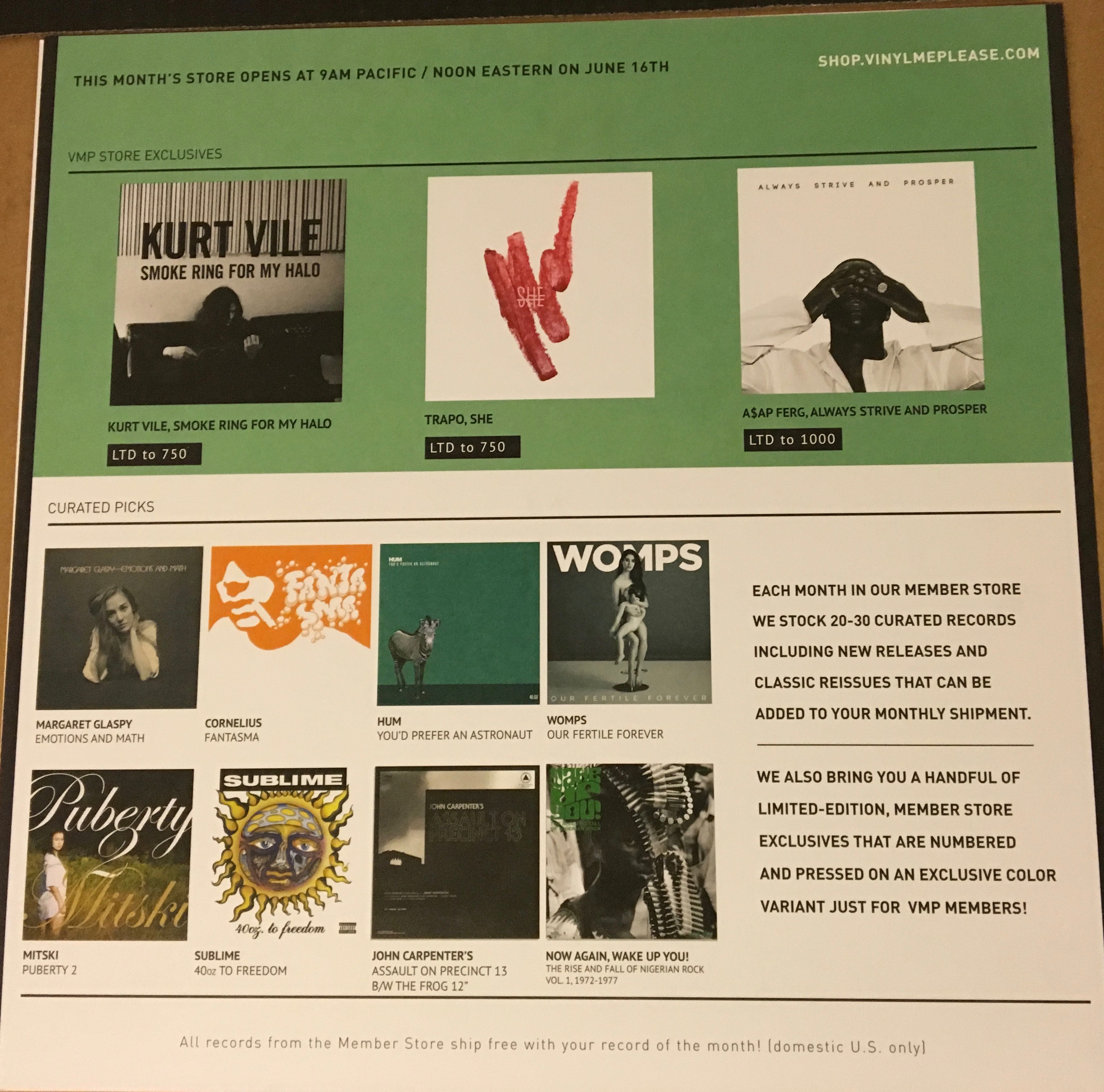 Once you get that plastic off, have a gander inside that gatefold. Totally digging that old gig-poster feel. 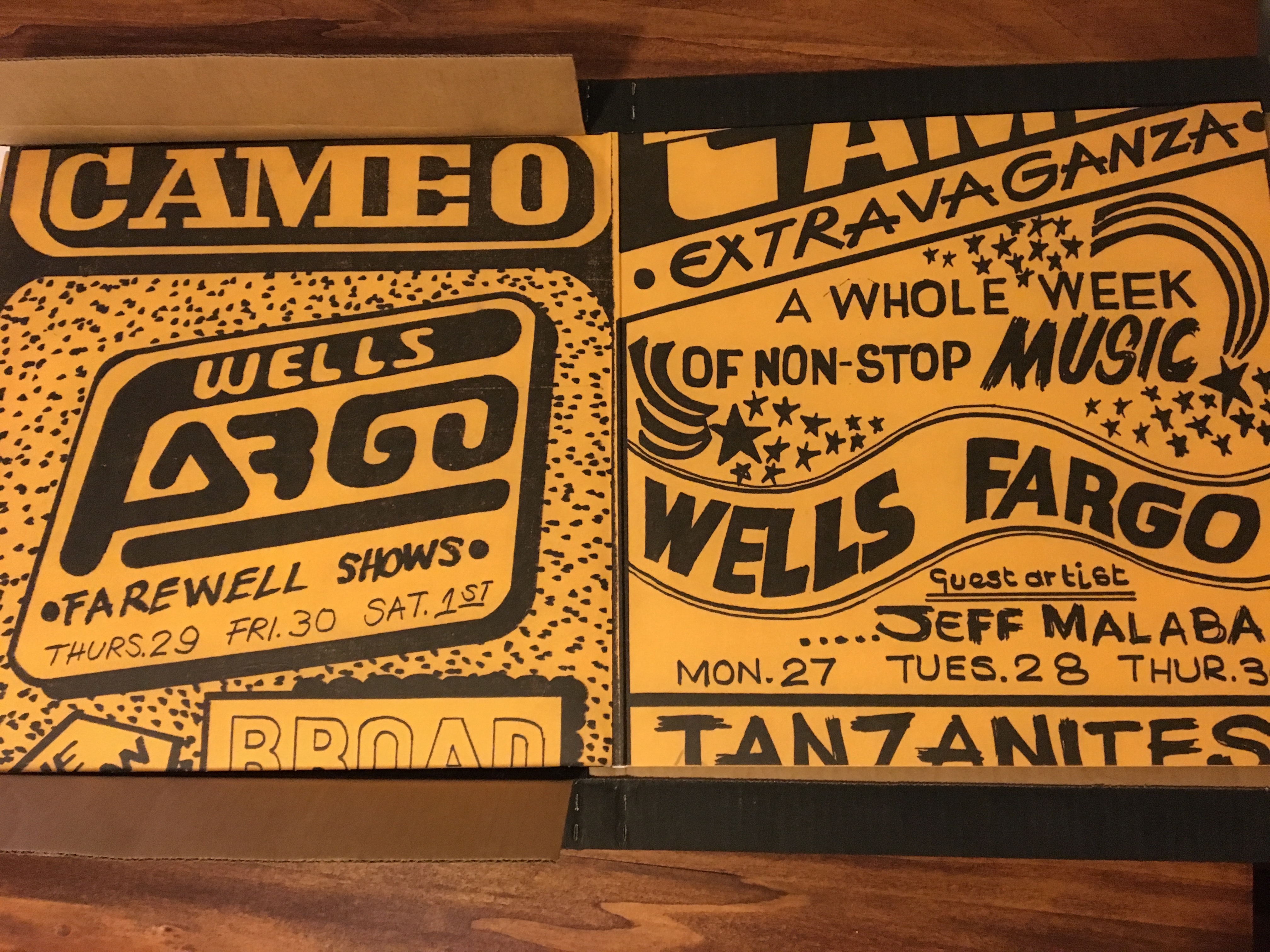 Once you get inside that sleeve, you’ll find a booklet with 20 pages of liner notes and rare photos of the band. Given how little information is out there about Wells Fargo, this book is an invaluable document for anyone who wants to know more of their story. Not to mention Zimbabwe’s ‘Heavy Music’ scene. 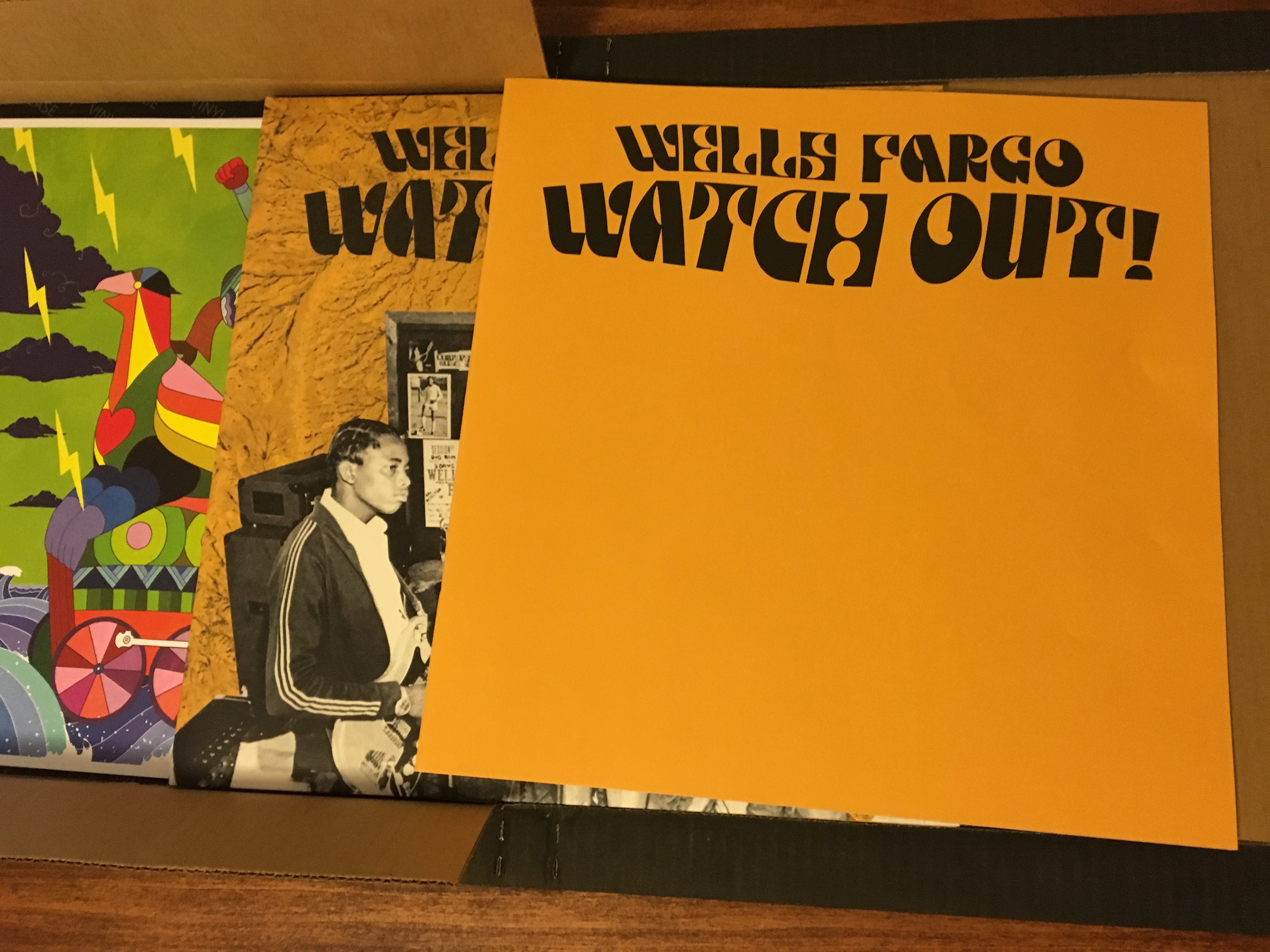 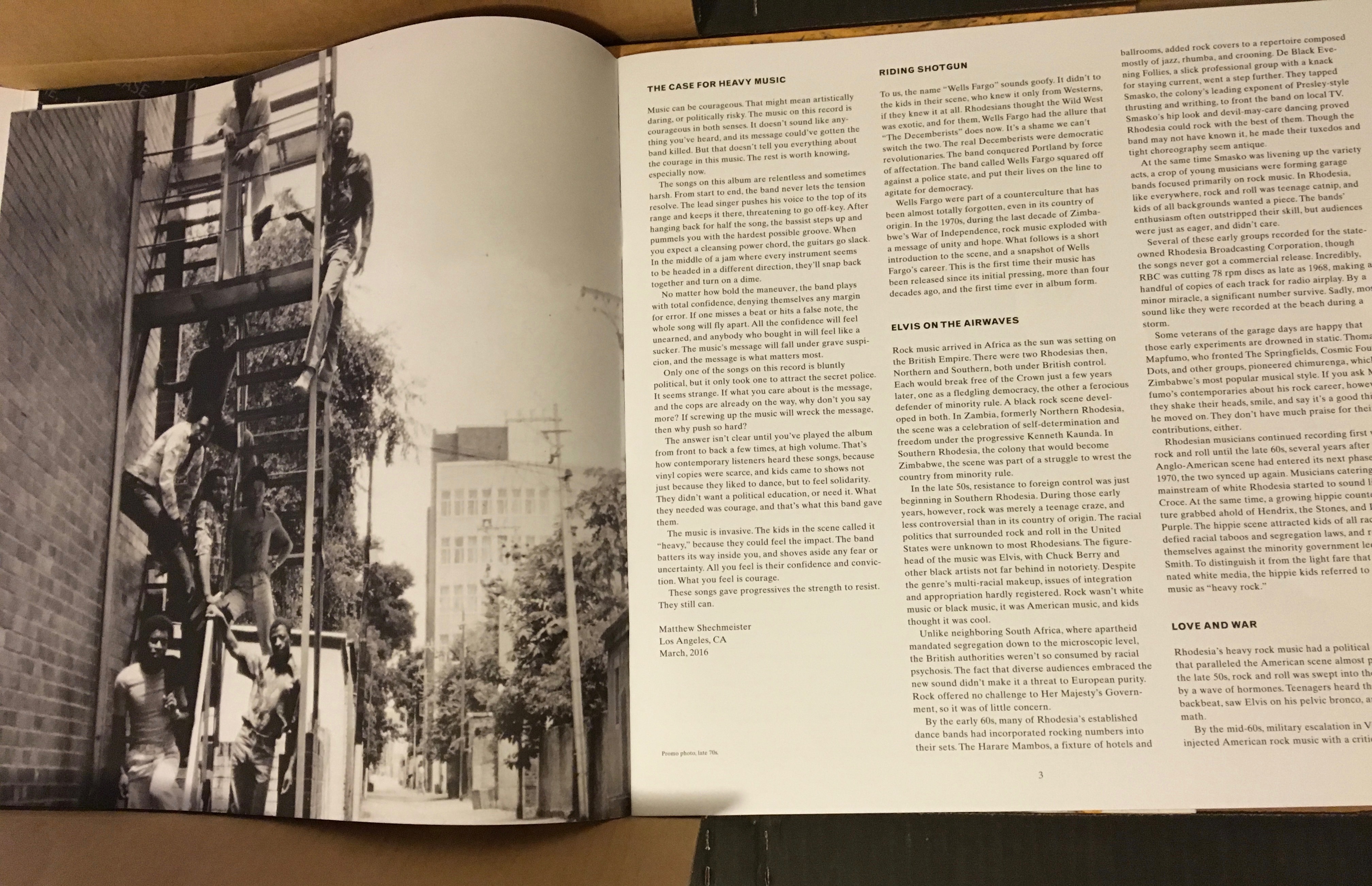 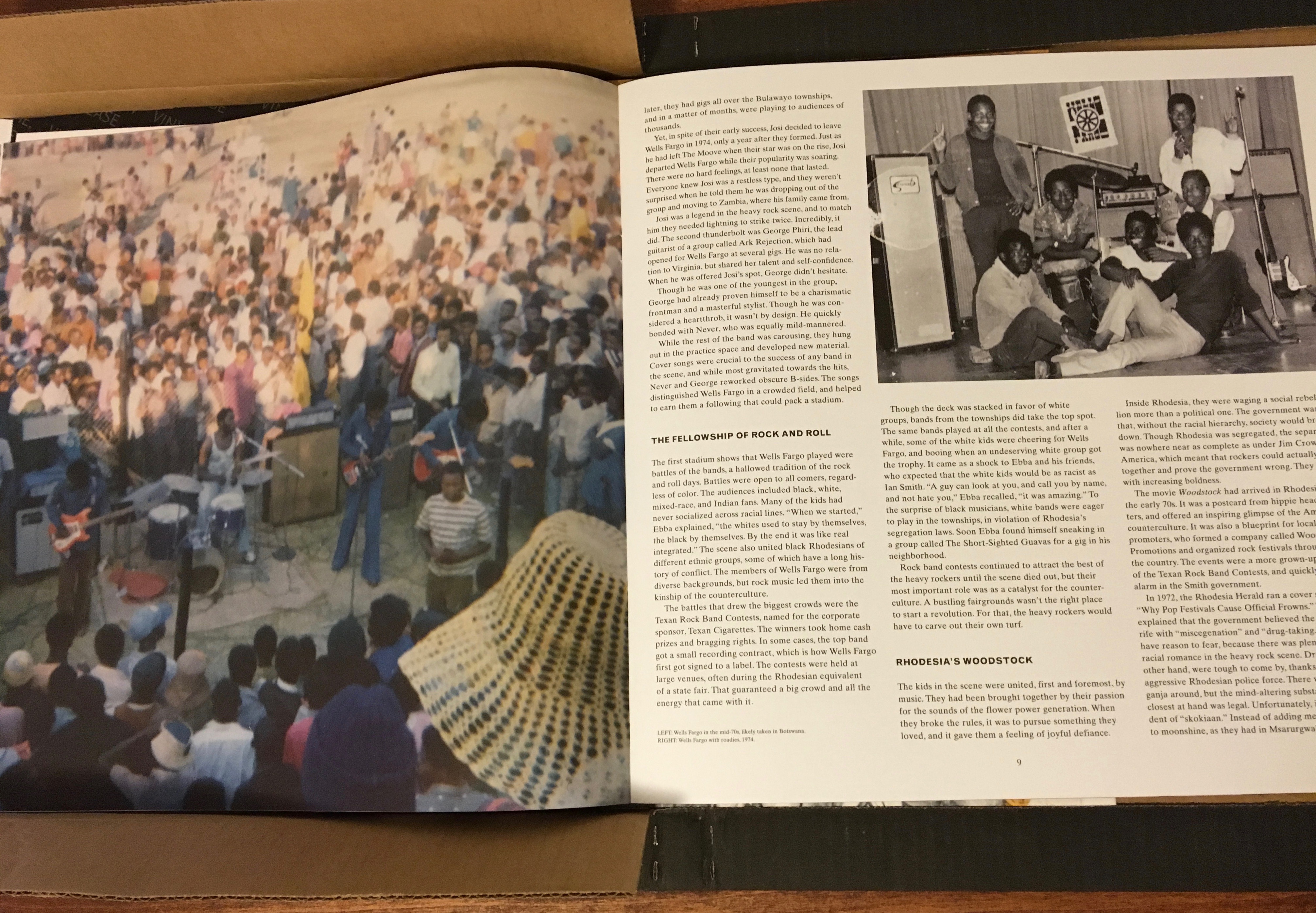 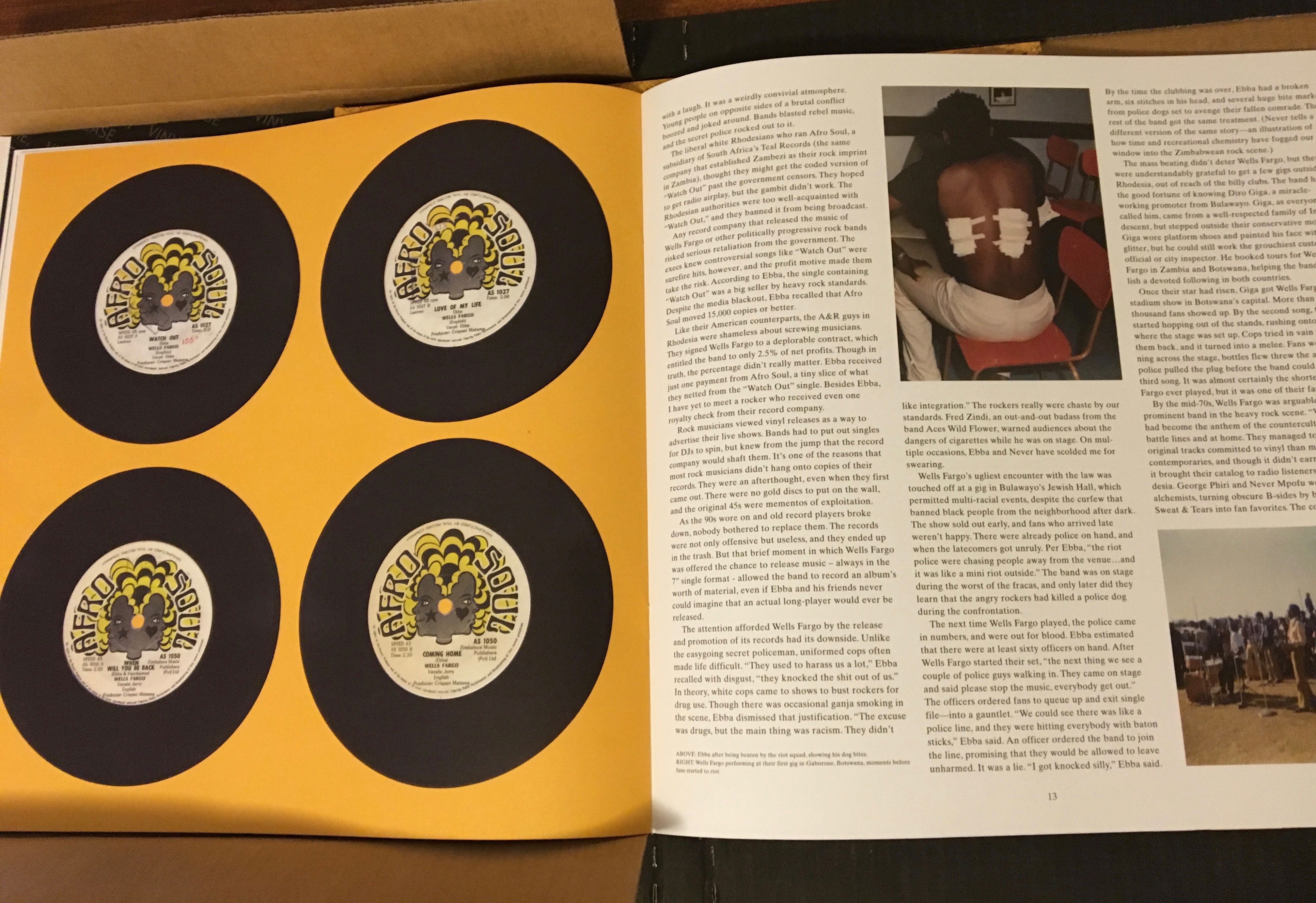 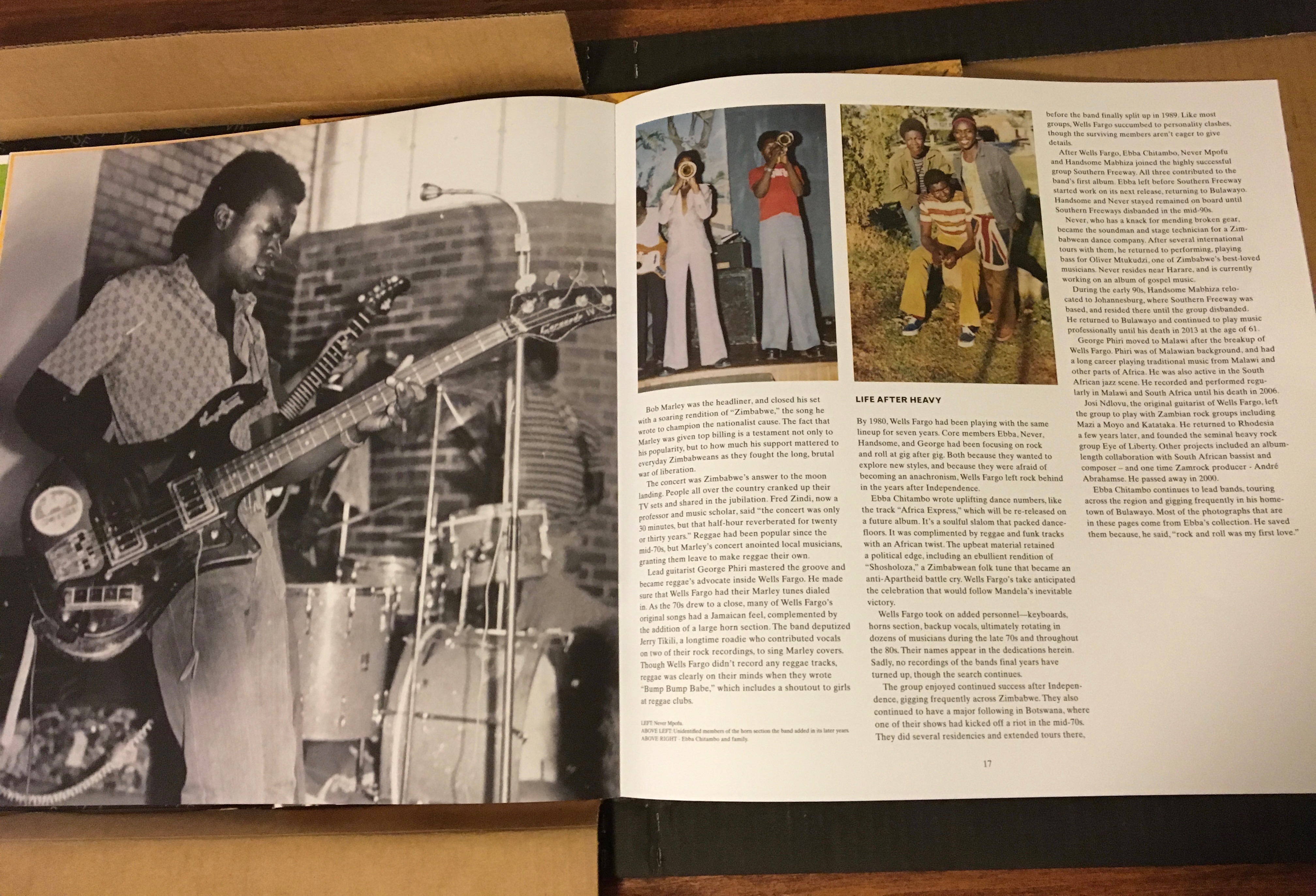 And once you slide that disc out, try not to freak over this psychedelic yellow and green tie-dyed disc. Just wow. 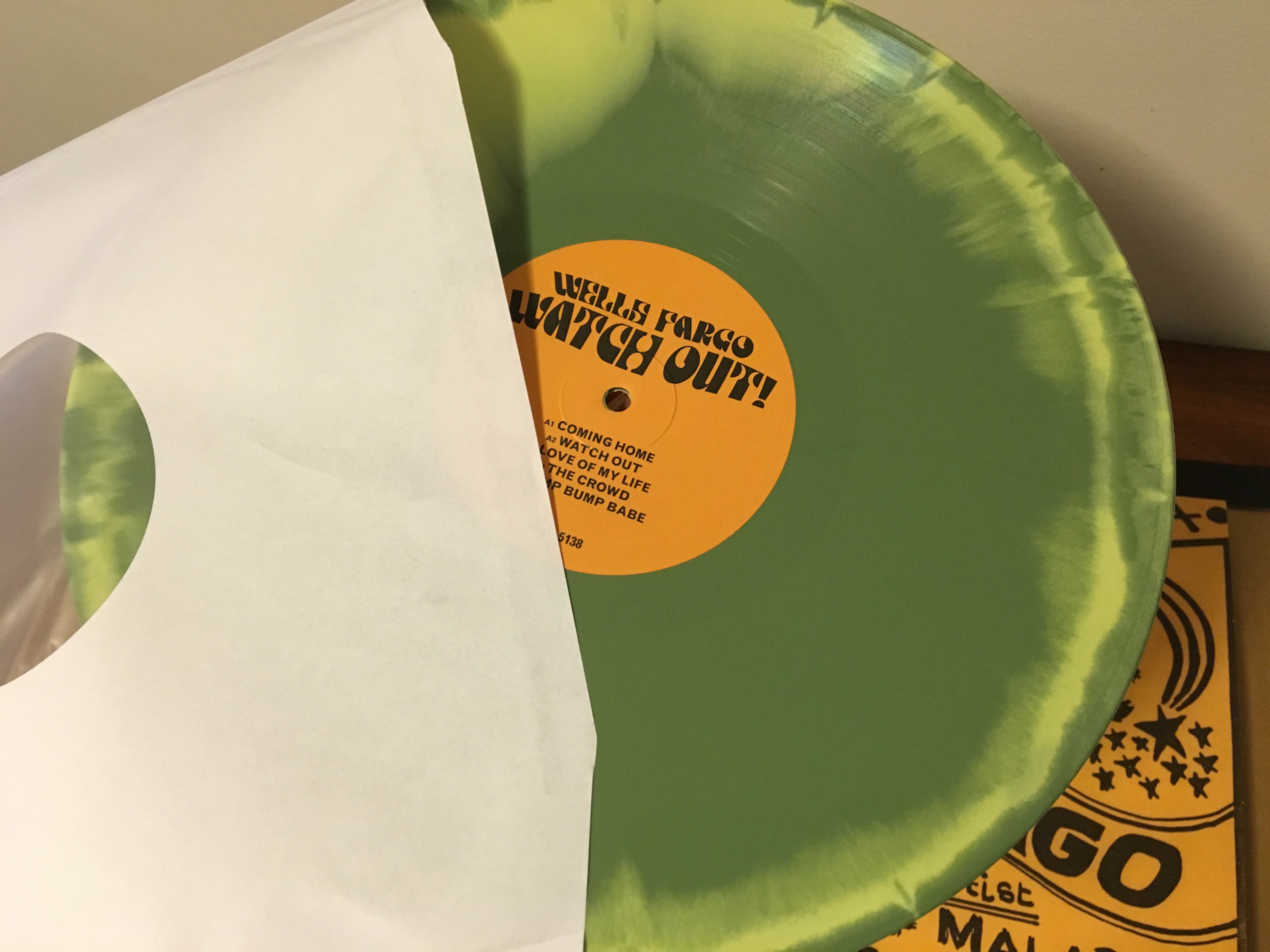 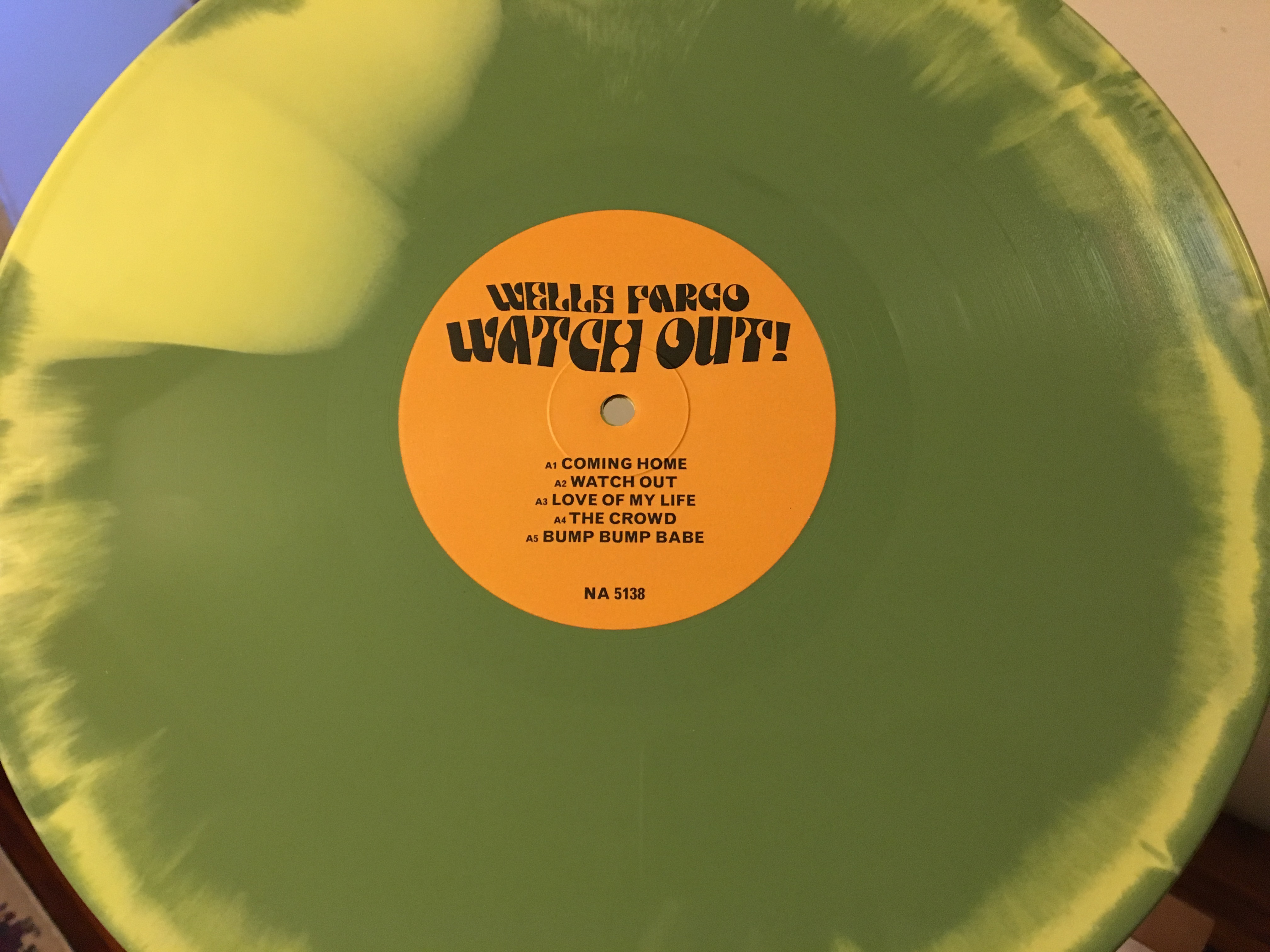 And wait ’til you see it spin. 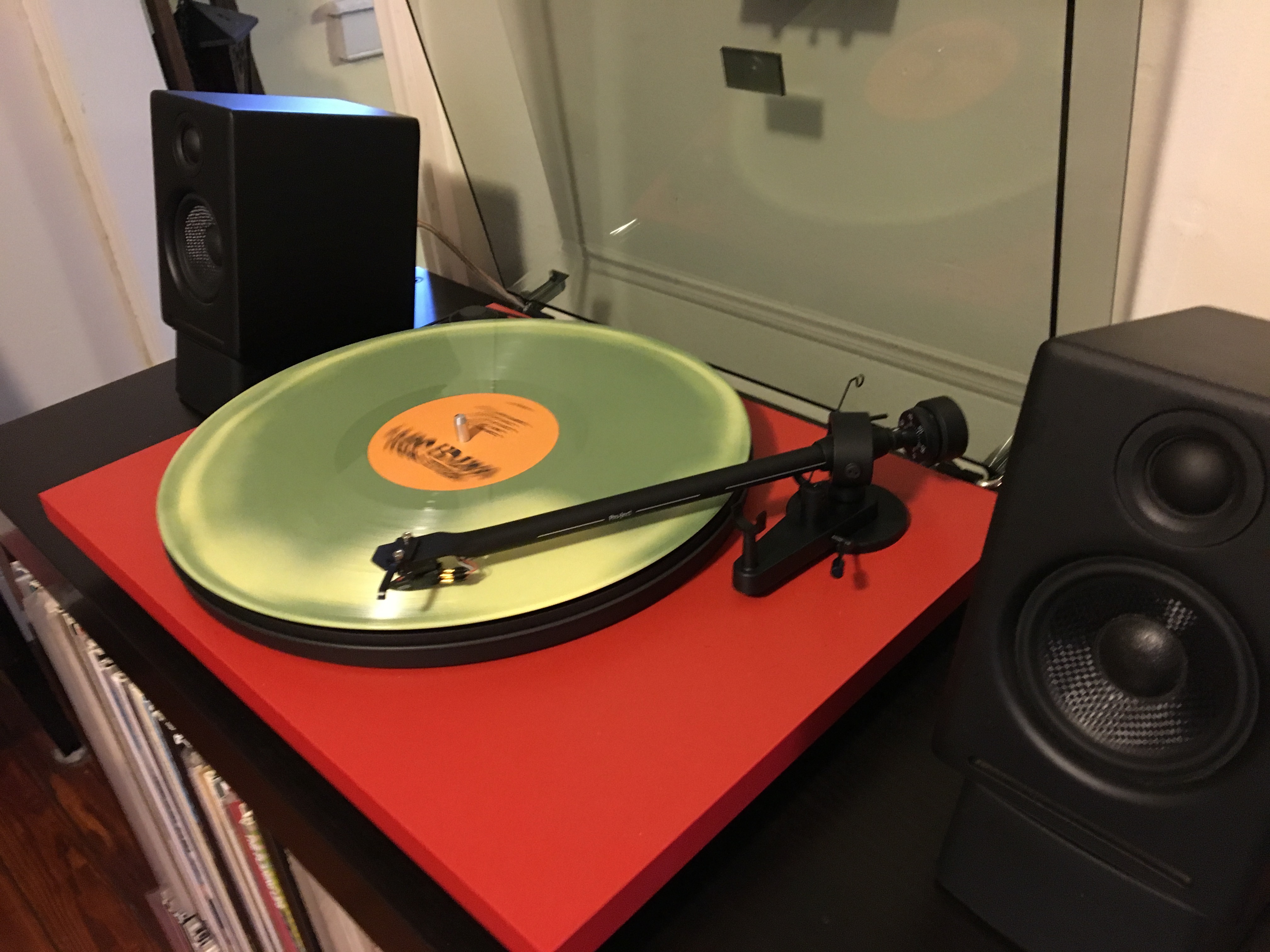 How’s it sound? Like you locked yourself in a basement with a few of your buddies determined to make the greatest rock & roll album ever. And then you did.

Ok, so Watch Out! may not be the greatest rock & roll album ever. But it will come as a bit of a revelation for many listeners. I know it did for me. Conceived in love and born into revolution, Watch Out! is a rock album of a time and place almost forgotten in the annals of history. And now it has a chance at vinyl immortality. Props to Vinyl Me, Please for plucking this album – and Wells Fargo – from obscurity and sending it out into the world. And for putting it in such sexy package. Of course, you may not always love the music VMP sends your way, but it will always be an adventure … and that’s the whole point of music.

And if you’re dying to know more about Wells Fargo right this second, have a listen to this VMP produced radio documentary about the band’s turbulent existence. Well done, VMP. Well done, indeed.

A big THANK YOU to our friends at Vinyl Me, Please for sponsoring this subscription. Don’t forget to check out the official Vinyl Me, Please website and sign up to get some choice wax delivered right to your door each month! Can’t wait to see what tasty treat is in store for July.
music geekRecord ClubVinyl GeekVinyl Me PleaseWatch Out!Wells Fargo