Here’s how it works. You supply Vinyl Me, Please with $23 a month and they supply you with one meticulously selected album worthy of your time and attention. Stupid easy, right? Each custom pressing (often in color!) also includes tons of special features like original artwork and even a companion cocktail recipe. There’s also the chance to get some free vinyl swag that the VMP team dishes out with alarming regularity. Best of all, you get access to the VMP members-only store. When the Member Store opens on August 16, you’ll have a chance to grab a copy of previous VMP selections from the archives – including July’s release of IV from BADBADNOTGOOD – plus additional rare and exclusive releases. And there’s more goodies on the way.

This month’s store will feature the self-titled release from doom pop maestros Preoccupations – formerly known as Viet Cong (store exclusive limited to 500 copies on blue vinyl), a transparent blue and beige pressing of glitchy synth jammer Tobacco’s new album Sweatbox Dynasty, and a special pink variant of that surprise new Wilco album, Schmilco. Oh yeah, folk songstress Angel Olsen’s new album My Woman will also be on hand in translucent purple vinyl. If you’re interested in that sort of thing. FYI – you should be. And that’s not even to mention a slick, 180g reissue of Art Blakely’s Jazz Messengers with Thelonious Monk. Jazz enthusiasts, do not sleep on this release.

If you’re still on the fence about signing up, just know that VMP’s Swaps Program is in full effect. You can read all about that program right here. And if you want to discuss the matter face to face with fellow VMPers, keep an eye out for VMP’s road-show, The Spins. They may be coming to a bar near you in the very near future. But why overthink it? Do yourself a favor and sign up today. Before you do, let’s have a look at what’s inside this month’s box. Spoiler alert – it’s Z from My Morning Jacket. Who’s ready to rock? 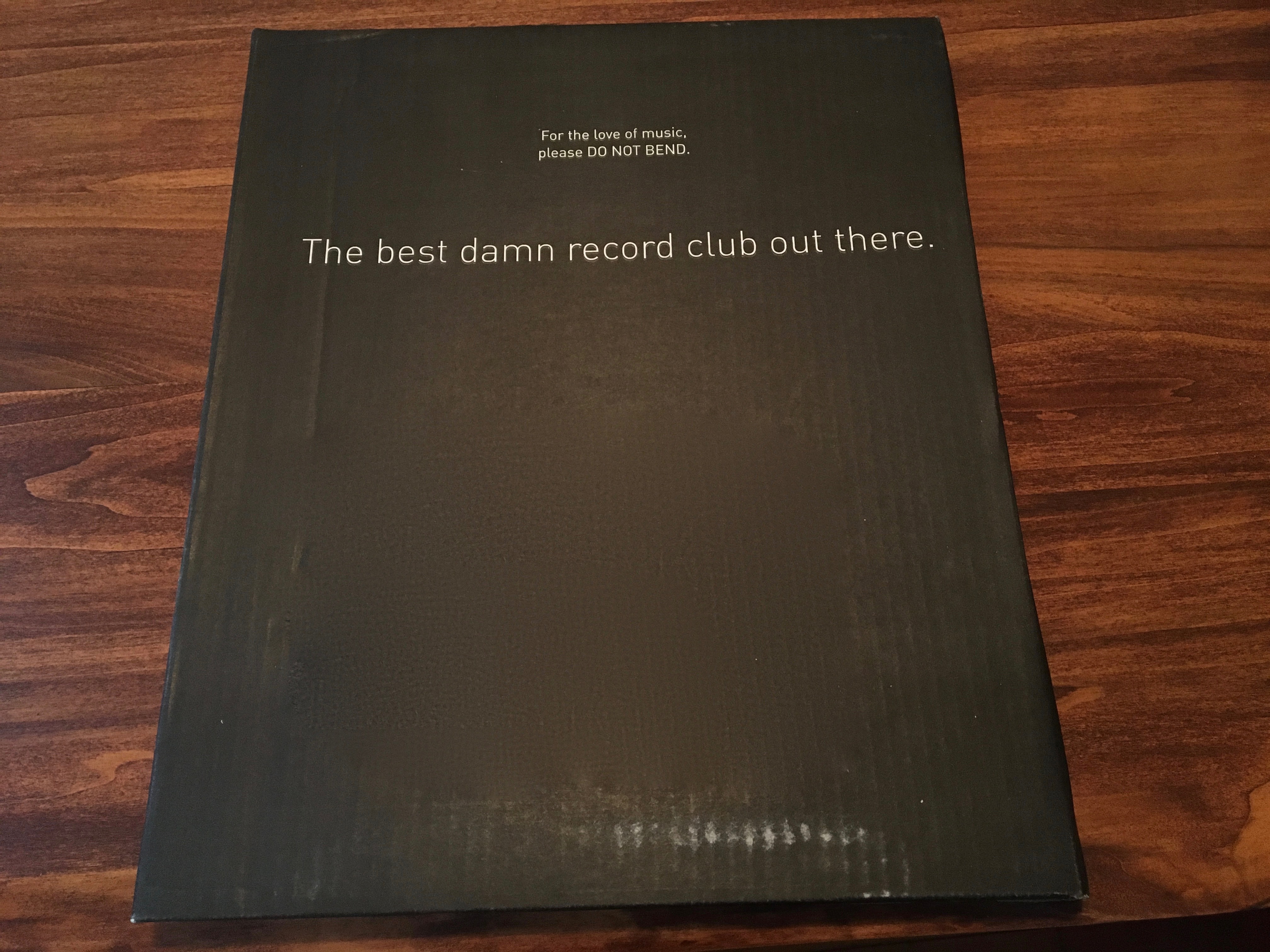 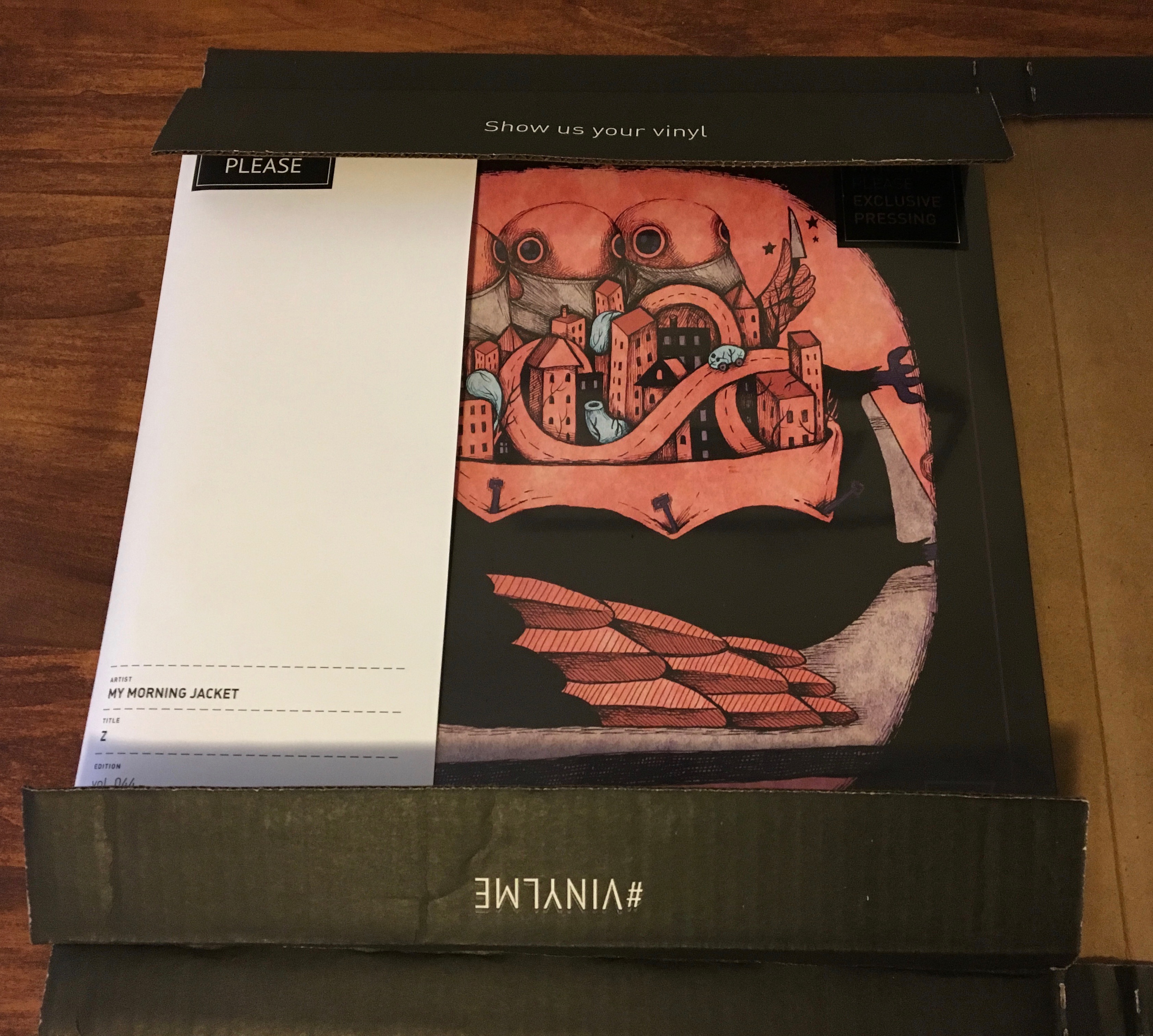 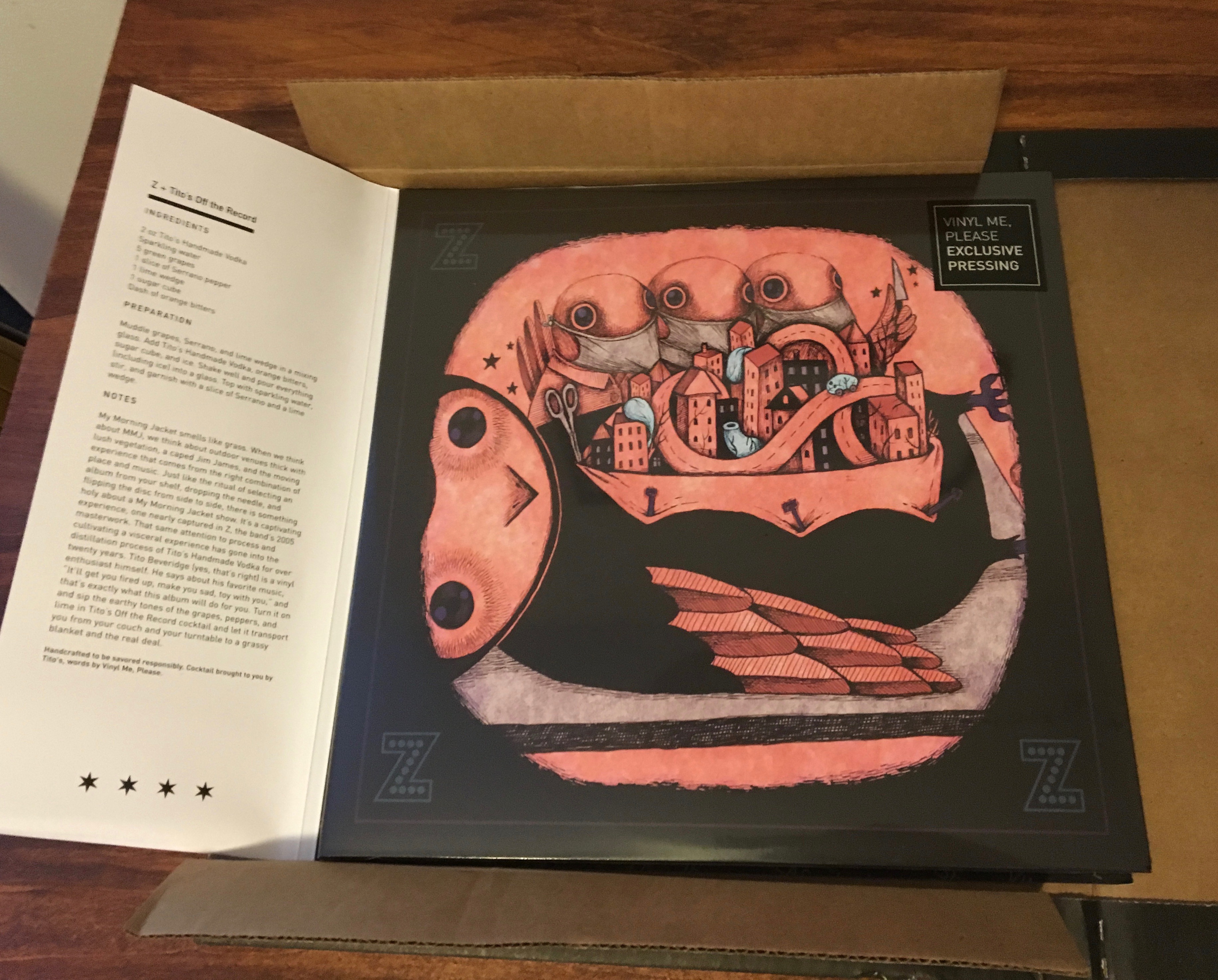 Z doesn’t really sound like a My Morning Jacket album. That much is obvious from the album’s moody opening track. The trembling synthesizers that lead ‘Wordless Chorus’ are a far cry from the hard rocking, country-soaked soul the band built its reputation on. Even when Jim James’ unmistakable voice echoes in a few moments later, ‘Wordless Chorus’ still feels like alien territory. It’s over a minute before you hear anything resembling the twangy guitars you expect from the Kentucky rockers. Even then, those guitars arrive behind a harmonious explosion that delivers on the song’s title. As ‘Wordless Chorus’ progresses, James’ haunted vocals evolve into the wild howls of an animal lost in the woods of his own soul. It’s dark. And brooding. But somehow James lets a gentle ray of hope shine through. In just over four minutes, James & Co. set an edgy, ominous tone for their album. They set a bold new course for their band in the process.

And Z is nothing if not bold. Through the percussive jangle of ‘Beats 4 U’ to the dancey, dub-infused ‘Off The Record’ or the haunted circus of ‘Into The Woods’, the band explores themes of loss and love and loneliness and spirituality with staggering insight and dramatic flair. And flair is exactly what you get in Americana classics like ‘Lay Low’ or full on guitar rockers like ‘Anytime’ and ‘What A Wonderful Man’. But ‘What A Wonderful Man’ also doubles as a heartfelt ode to James’ friend Aaron Todovich. Todovich’s suicide shaped much of the content on Z. It’s felt most in the album’s sombre closer ‘Dondante’ as James mournfully croons “well I saw it in your movements, even though you never knew it, well I knew.” As James’ falsetto soars off into the ether, you can feel the ghost in the room with him. The full on guitar assault that follows a few moments later seems only a temporary respite from the loss.

Through all of its highs and lows, Z is an album full of loss and ghosts and glimpses into the dark corners of the soul. But it never fully succumbs to its anguished overtones. Above all else, it’s an album about looking within and finding the pure joys in life through good times and bad. And bad times will come. When they do, just know that – if nothing else – you can turn to Z for a little comfort. And a little joy. And maybe even a flame to light the torch that leads you out of the darkness. There aren’t many albums that can claim that sort of power. So here’s Z – a voice echoing to you out of the static. A voice that begs to be heard and a voice you really need to listen to.

Z is an album that’s all about looking inside yourself and finding a way to deal with all the light and dark and lunacy that lives there. Sometimes that means ripping everything out and having an up close and personal look at things. So yeah, this cover is pretty much perfect. And yes, that’s a VMP exclusive color variant. Sweet. 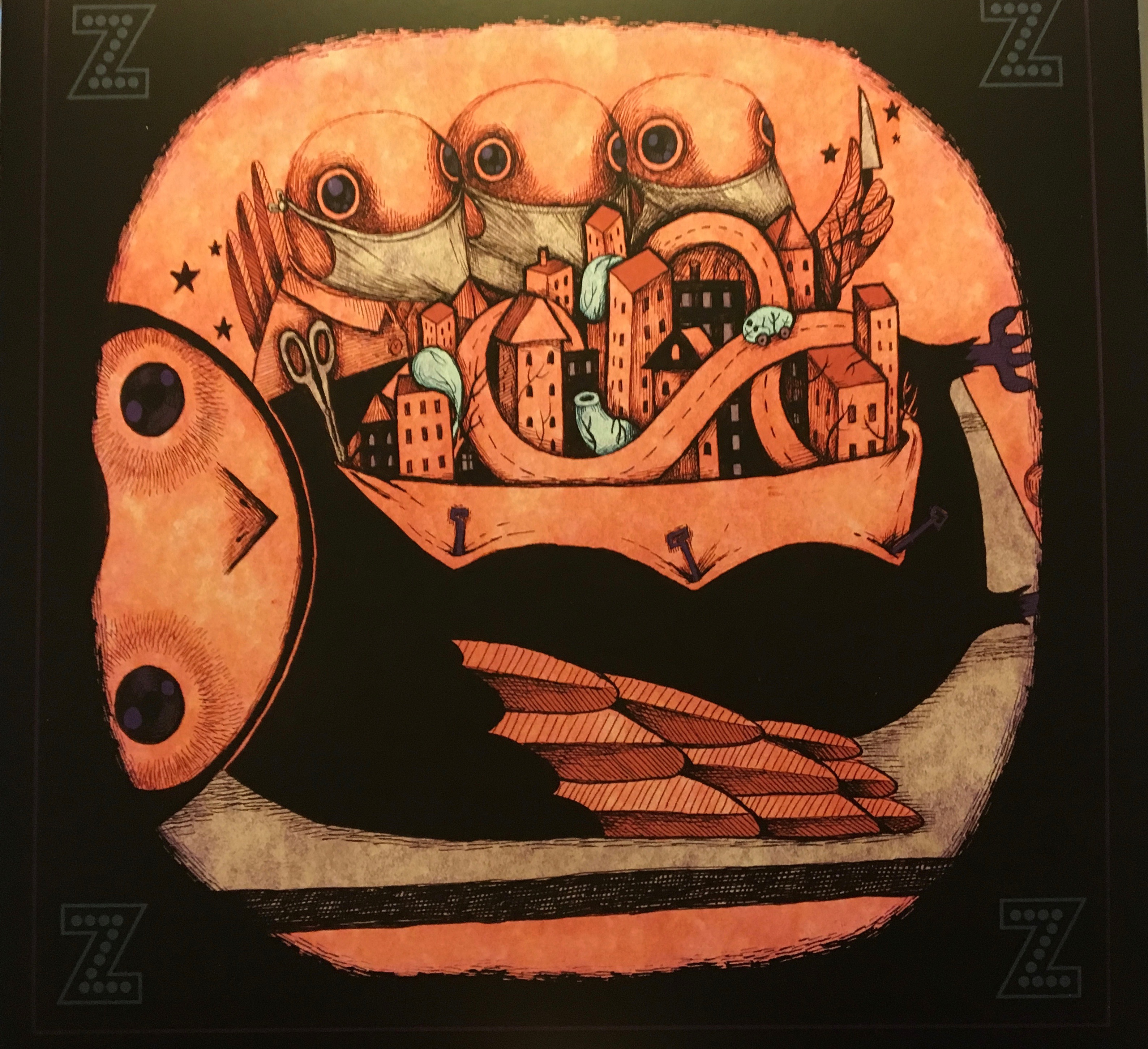 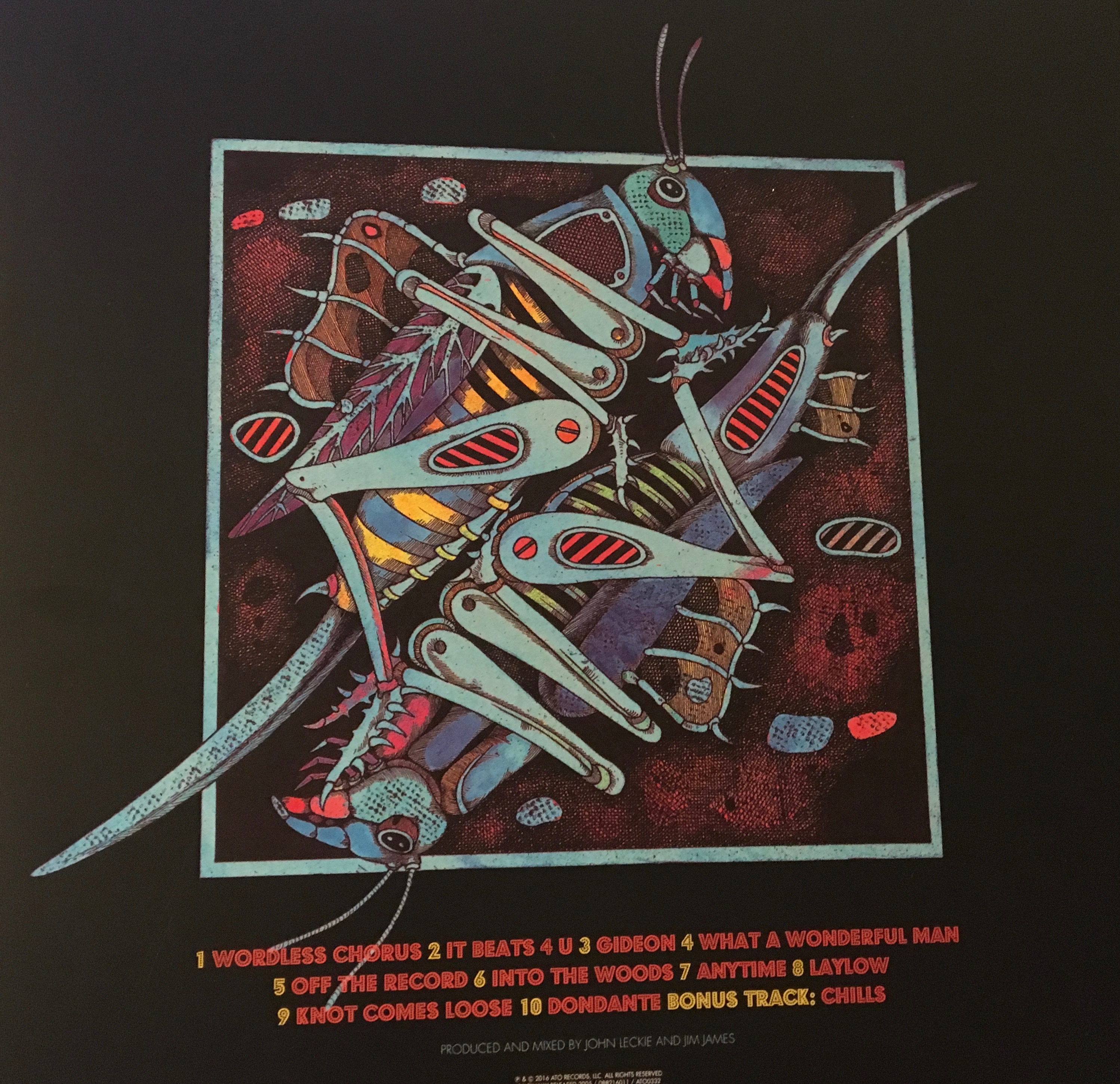 Take a few moments to absorb all that lovely artwork. And take note of the bonus track listed. Very nice. But before you rip open that shrink-wrap and start digging through the sleeve, take note of the all-important info on this sticker. Hi-5 to the VMP team for leading the league in Exclusive Pressings. Now, let’s commence to digging. 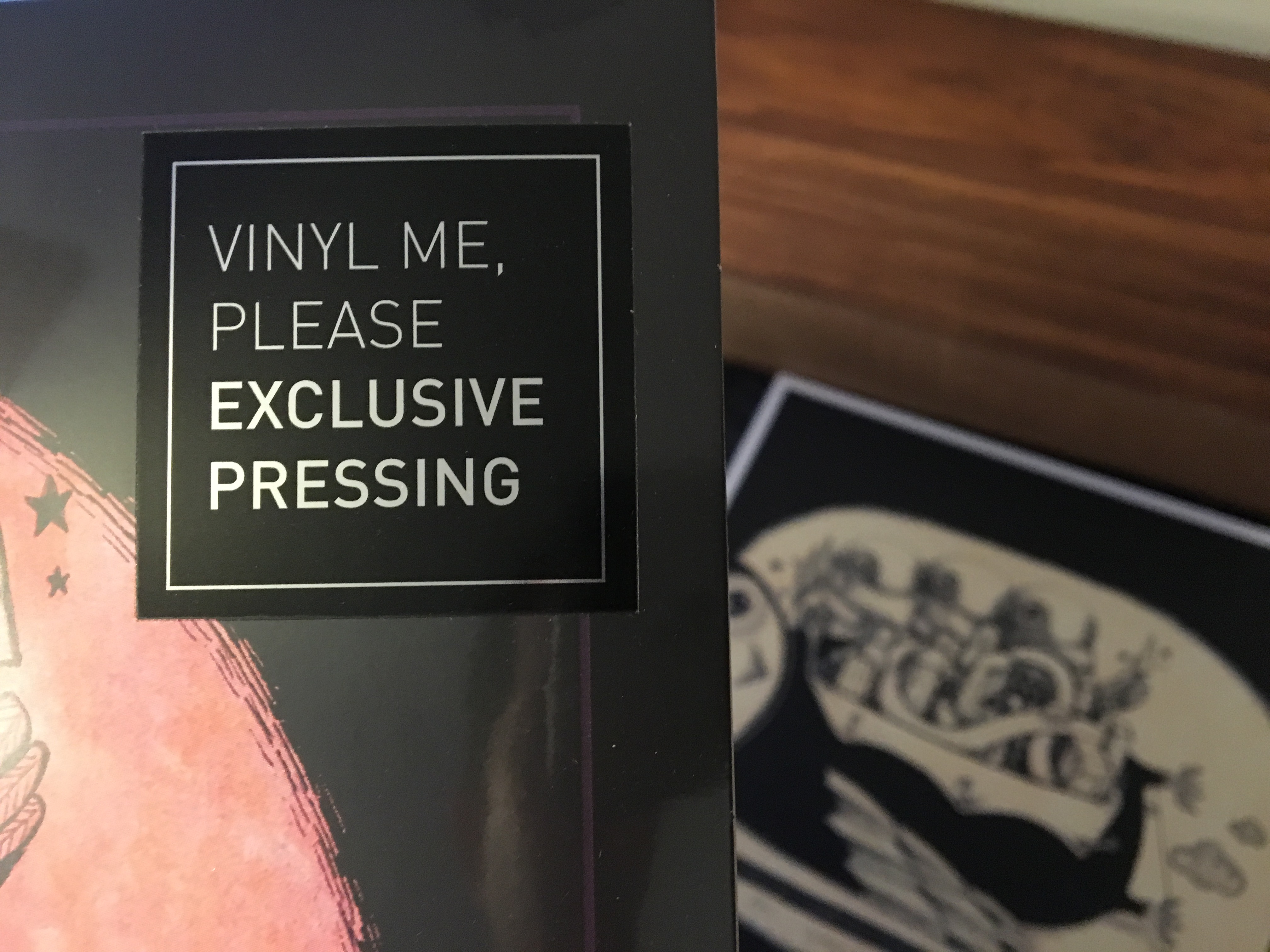 As always, the album comes wrapped in a half-sleeve chock full of important info. Artist’s name – My Morning Jacket. Album title – Z. Volume – 44. Even the initials of the VMP Staffer who handled your disc. You’re my hero, SR. Thanks for the love. 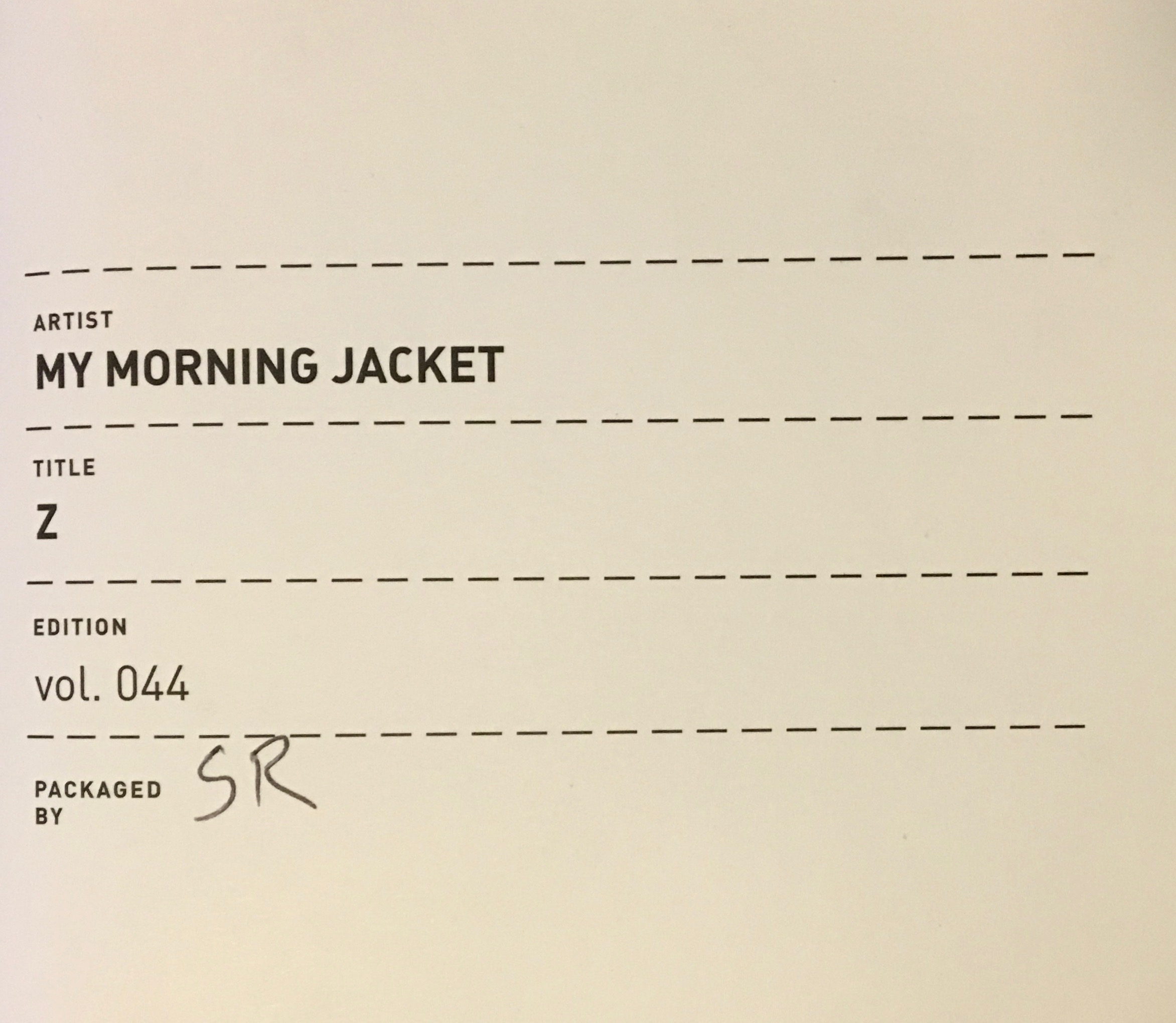 Don’t forget to check out the album’s signature cocktail – Tito’s Off The Record. It features delicious Tito’s vodka, requires five green grapes and sounds refreshing as hell. But given the band’s Kentucky roots, it sure seems like bourbon was in order this month. Just sayin.

You’ll find a couple of hidden gems in the box too – like this bit of rambling from VMP’s own Tyler Barstow. There’s also a killer 12″x 12″ print from Kathleen Lolley. If you think it’s just an alternate play on the now iconic cover art, think again. That’s the original sketch that inspired it. And if you read the blurb below, you’ll hear from Jim James himself on why it was chosen. Which is pretty damn cool. 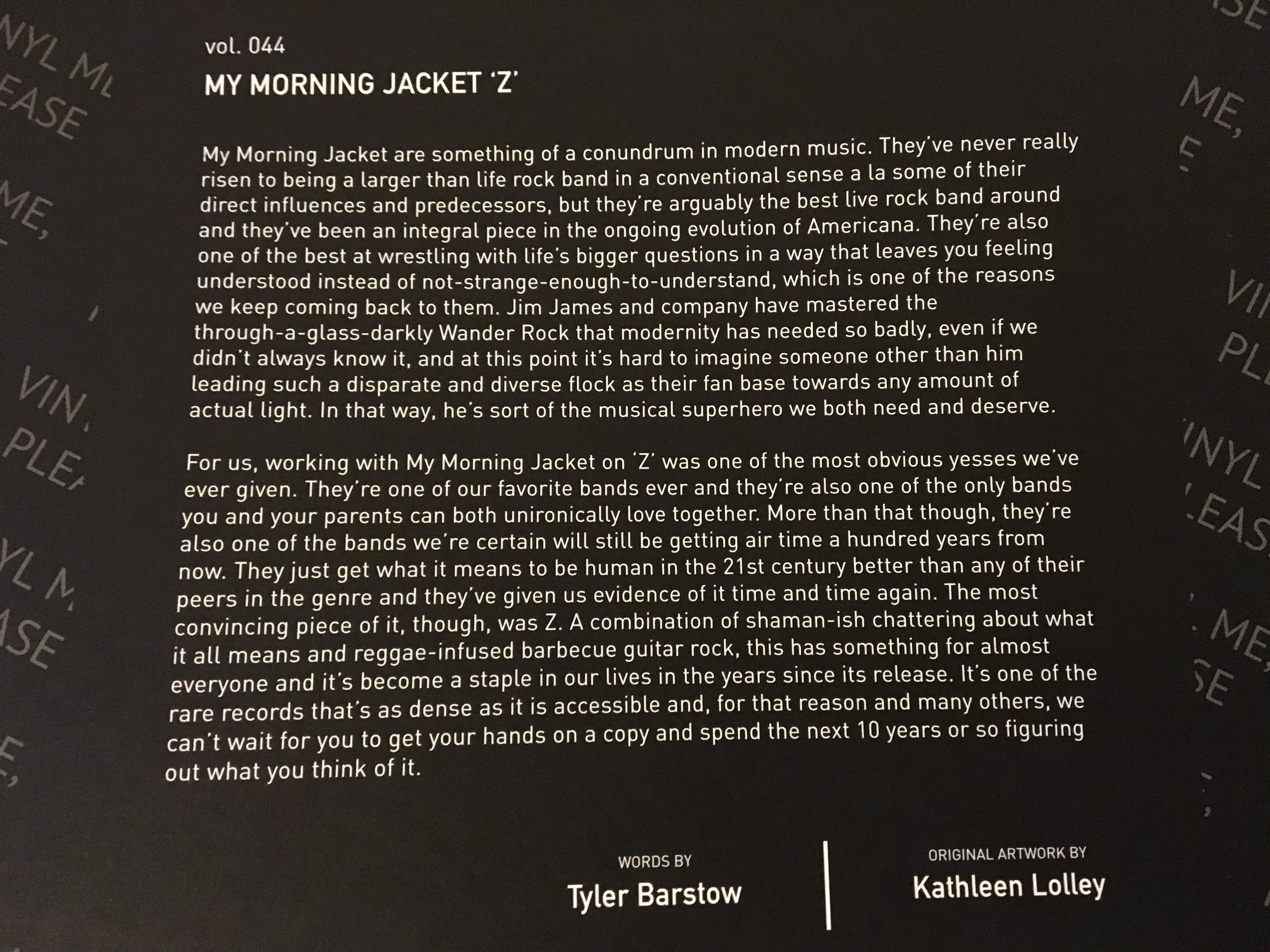 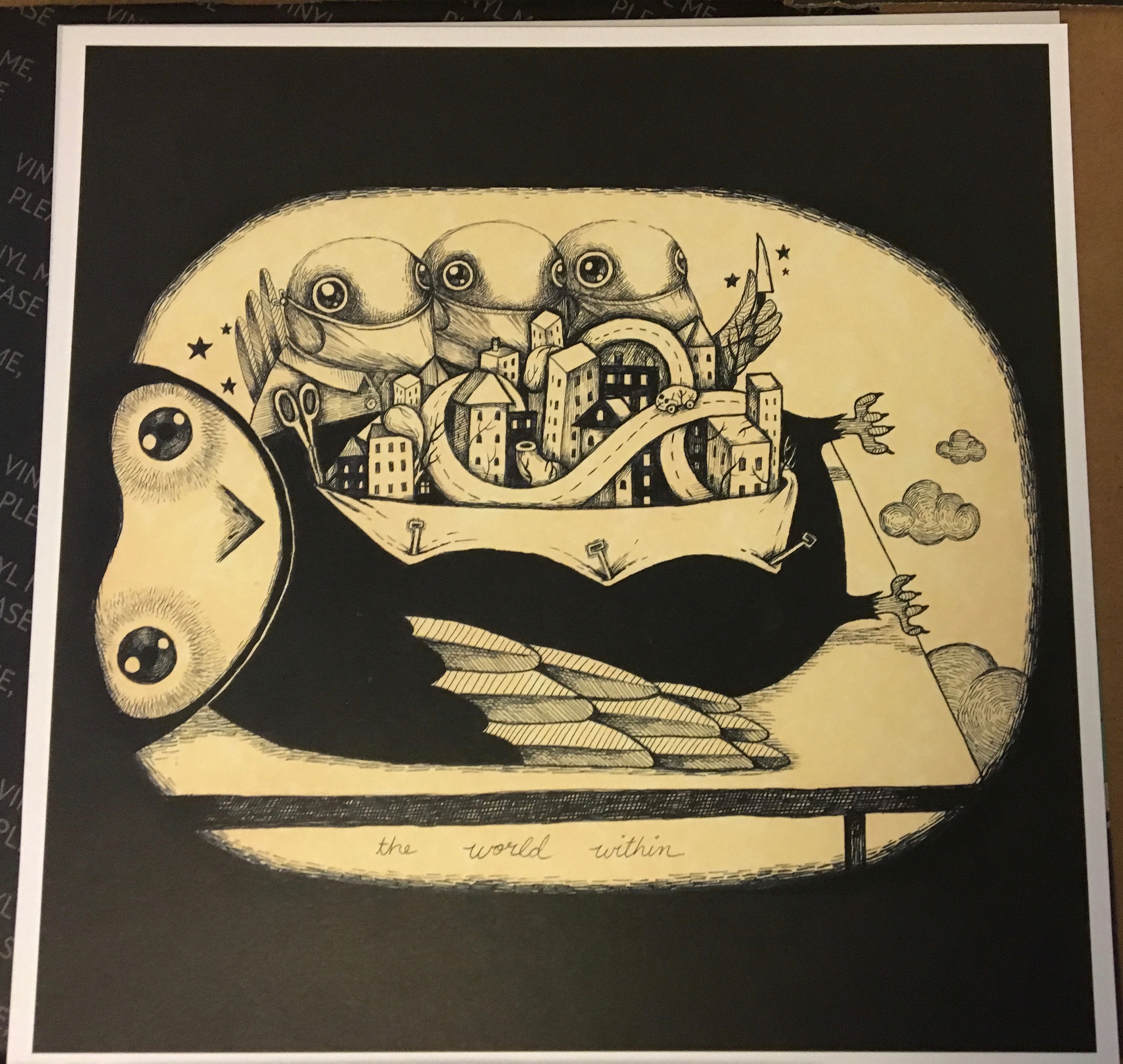 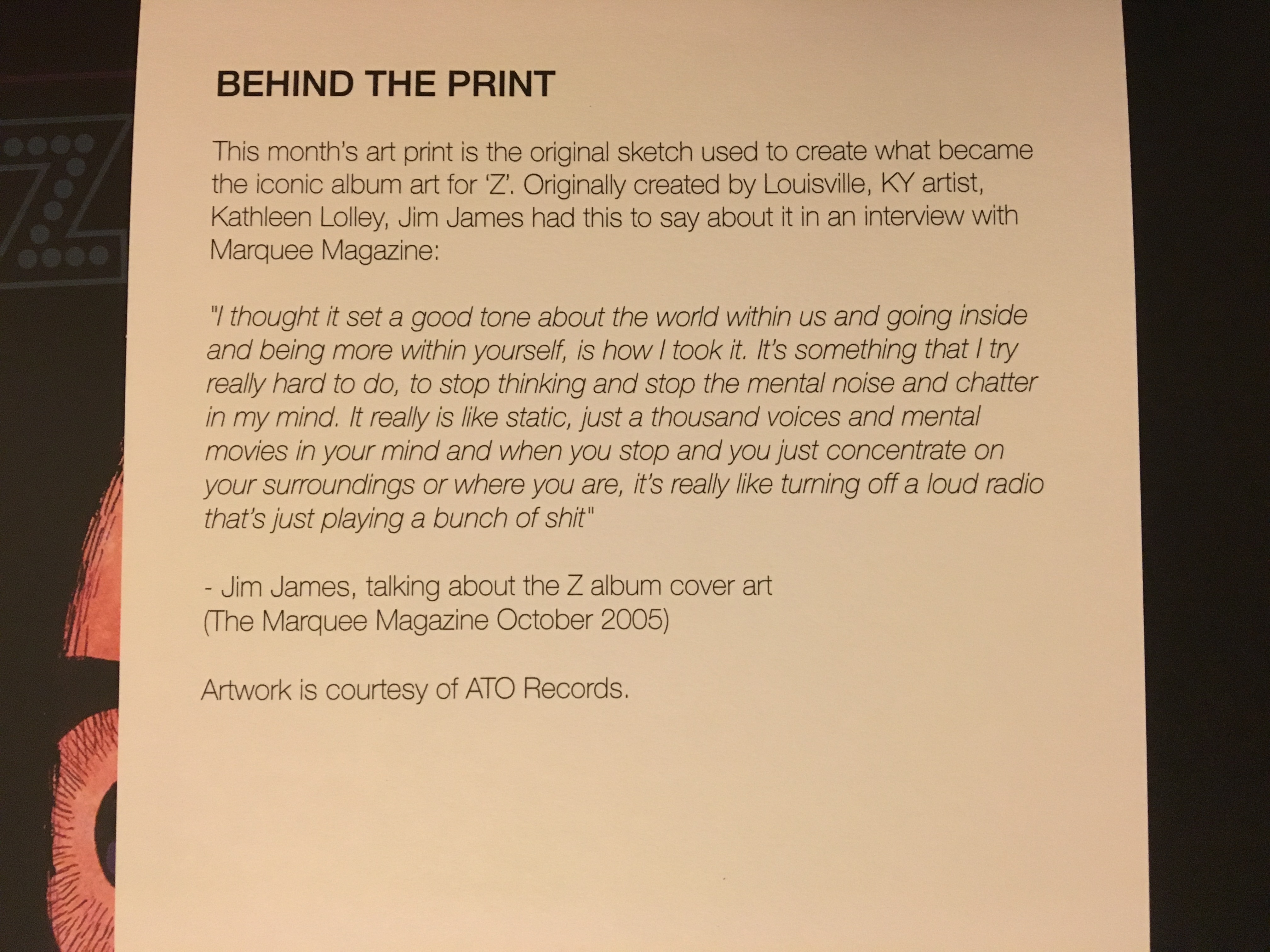 You’ll also find a little teaser for what’s coming to this month’s VMP Members Store. Oh hey, did I forget to mention that Exploded View’s much anticipated debut album is hitting the store this month? ‘Cause it is. 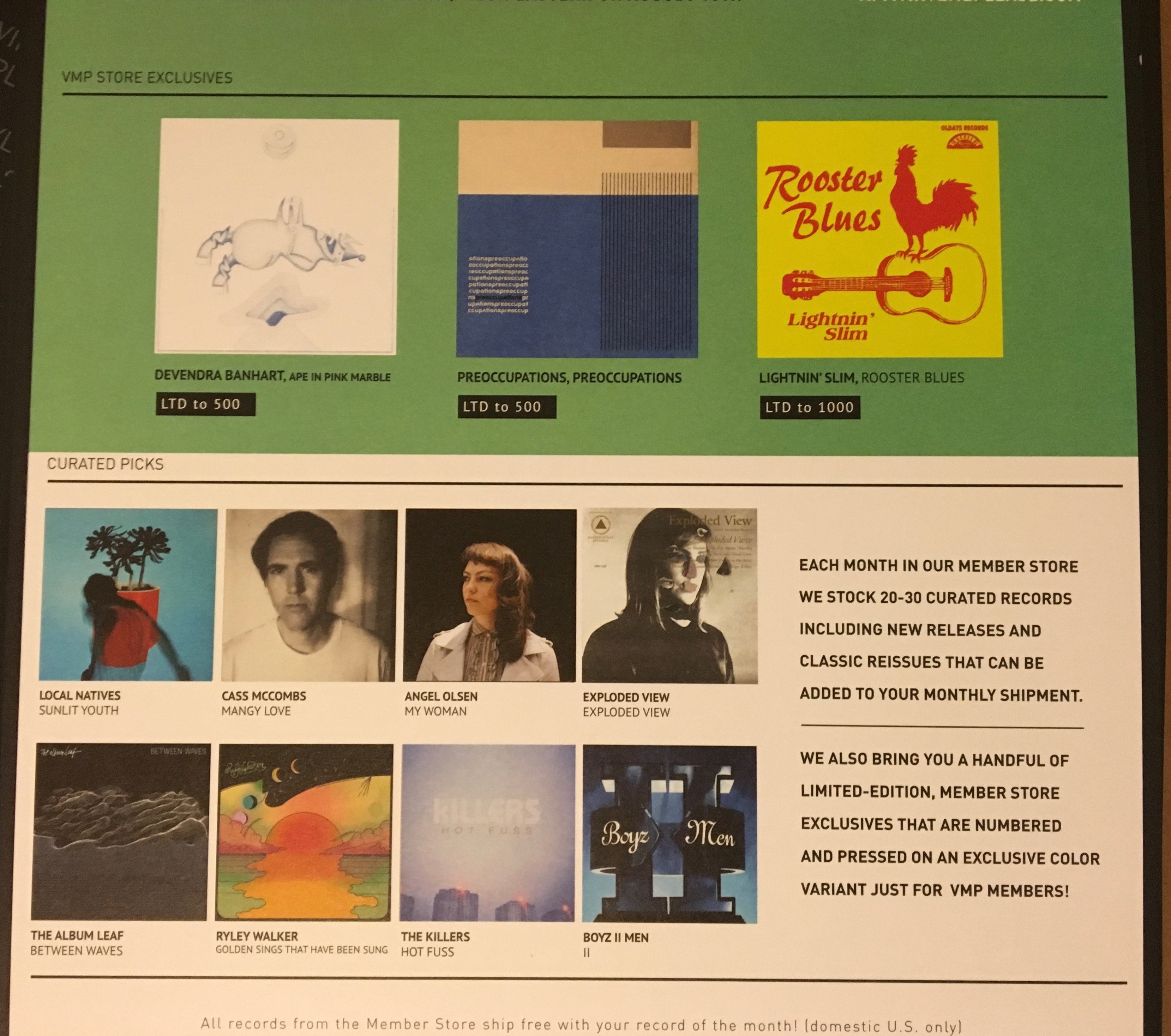 Don’t overlook this lovely bit of sketch work once you get that shrink-wrap off. There’s no shortage of eye-catching artwork with this release, and the band makes marvelous use of that gatefold. 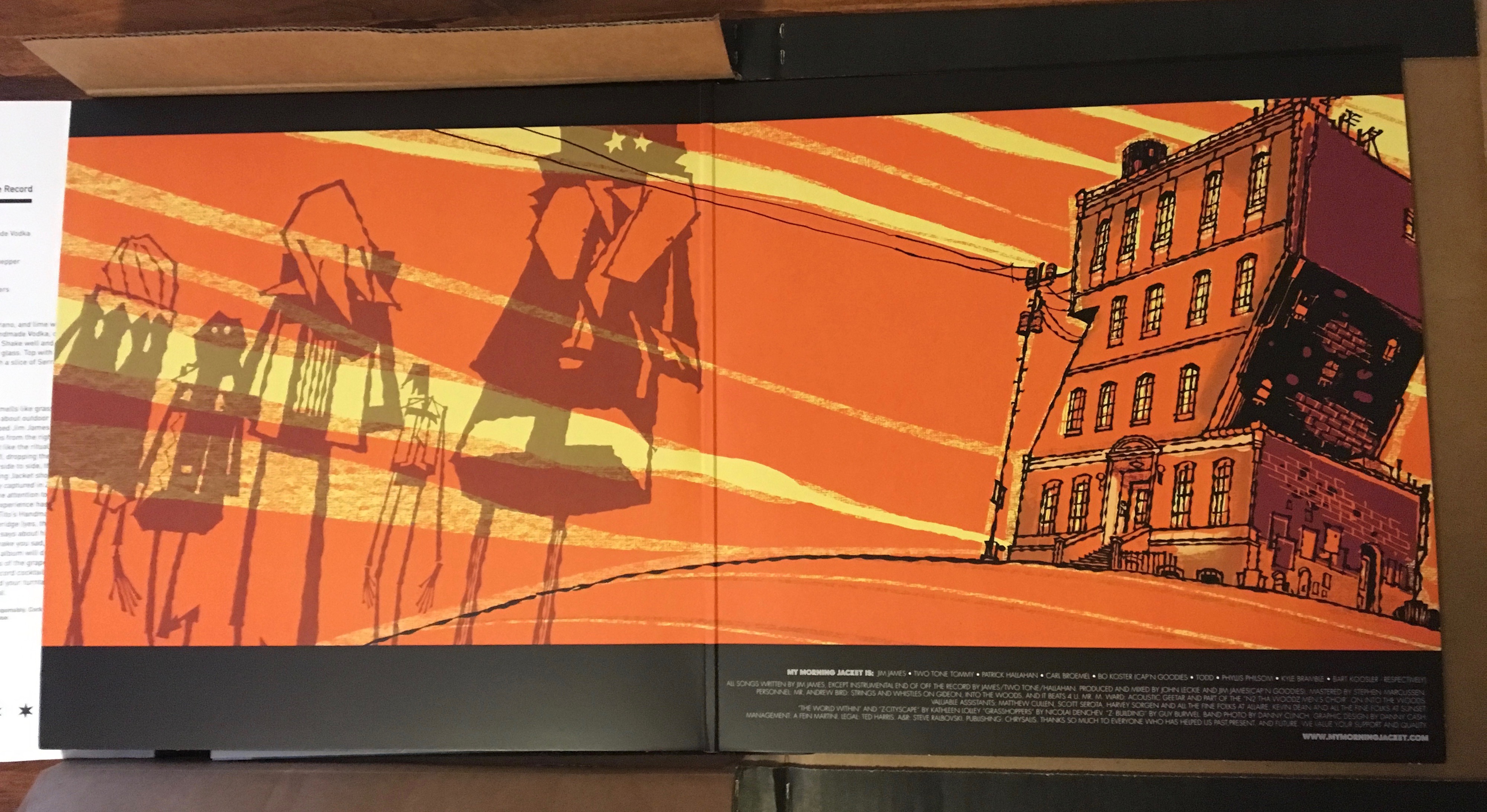 There’s more goodies inside those sleeves too. Like a digital download from the folks at ATO Records. 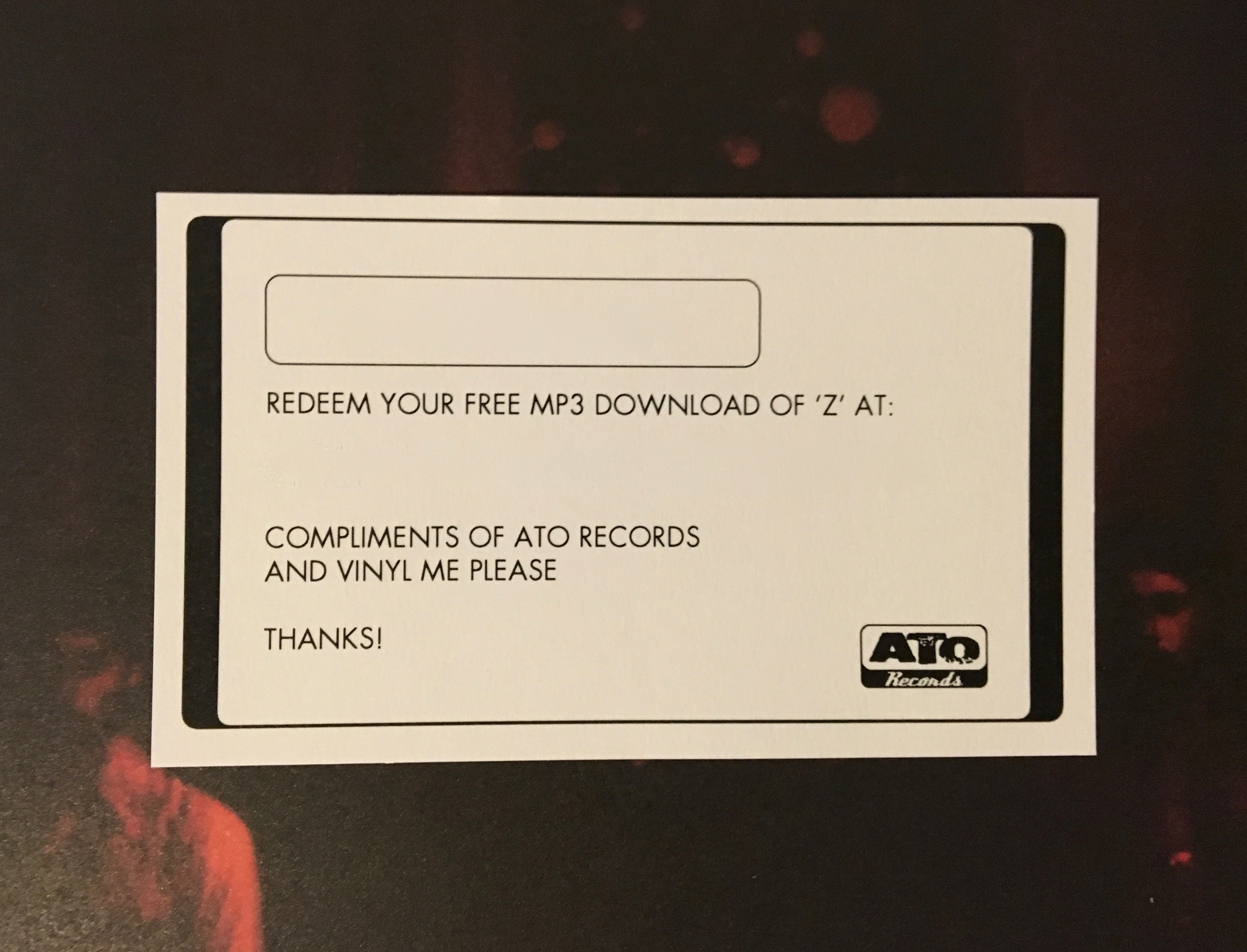 And a full lyric book for those of you who like to sing along. There’s some more killer artwork on the front and back covers too. 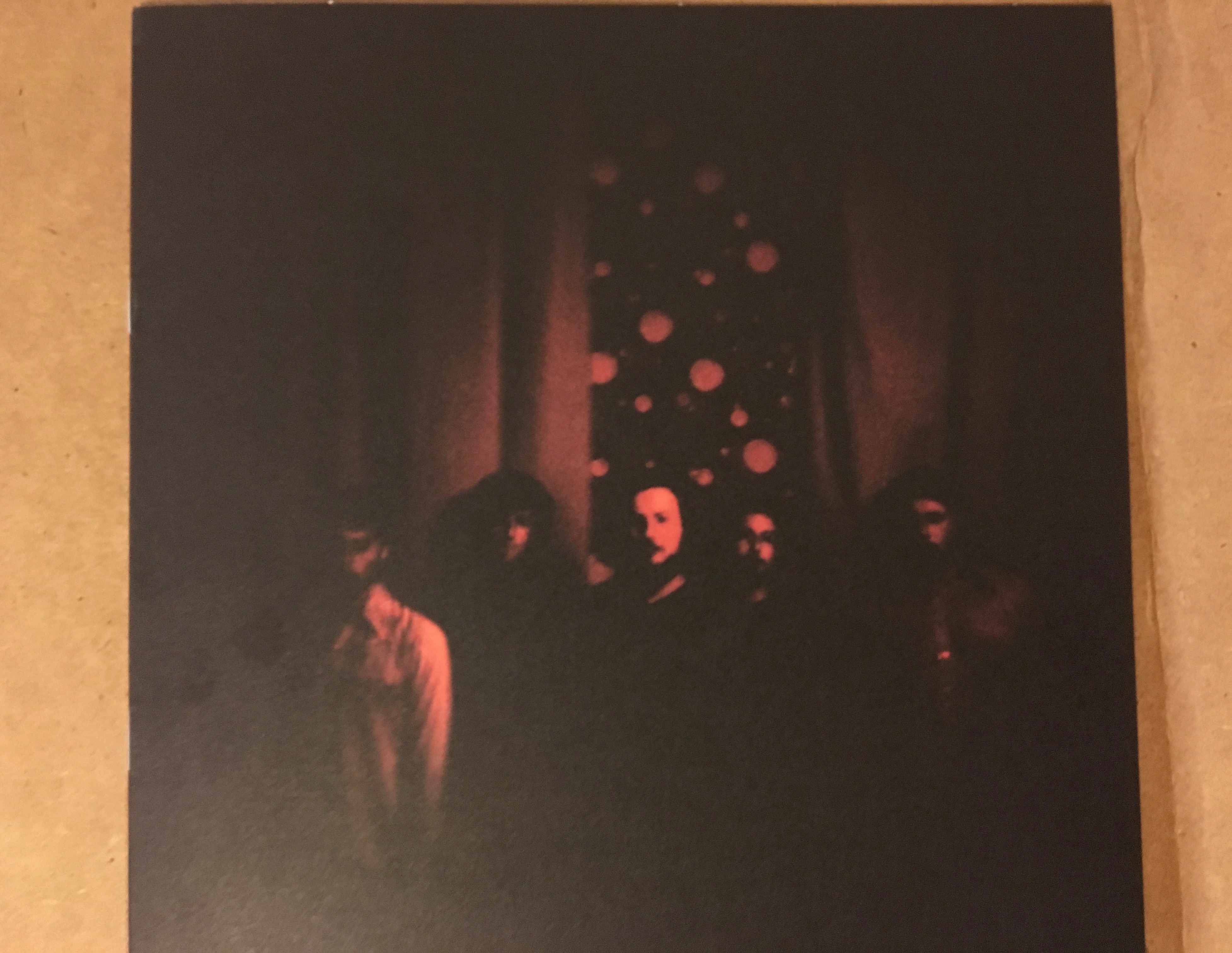 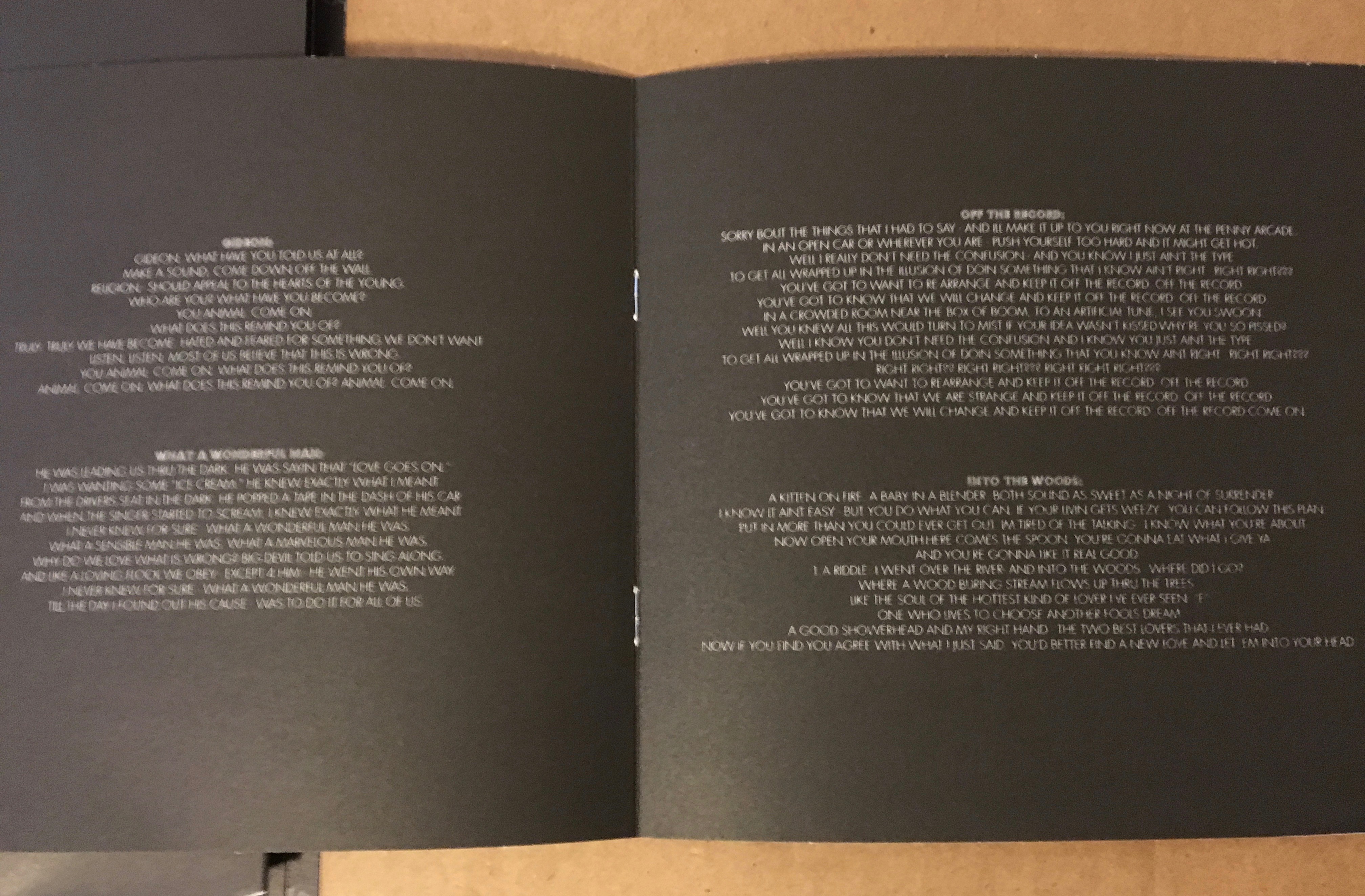 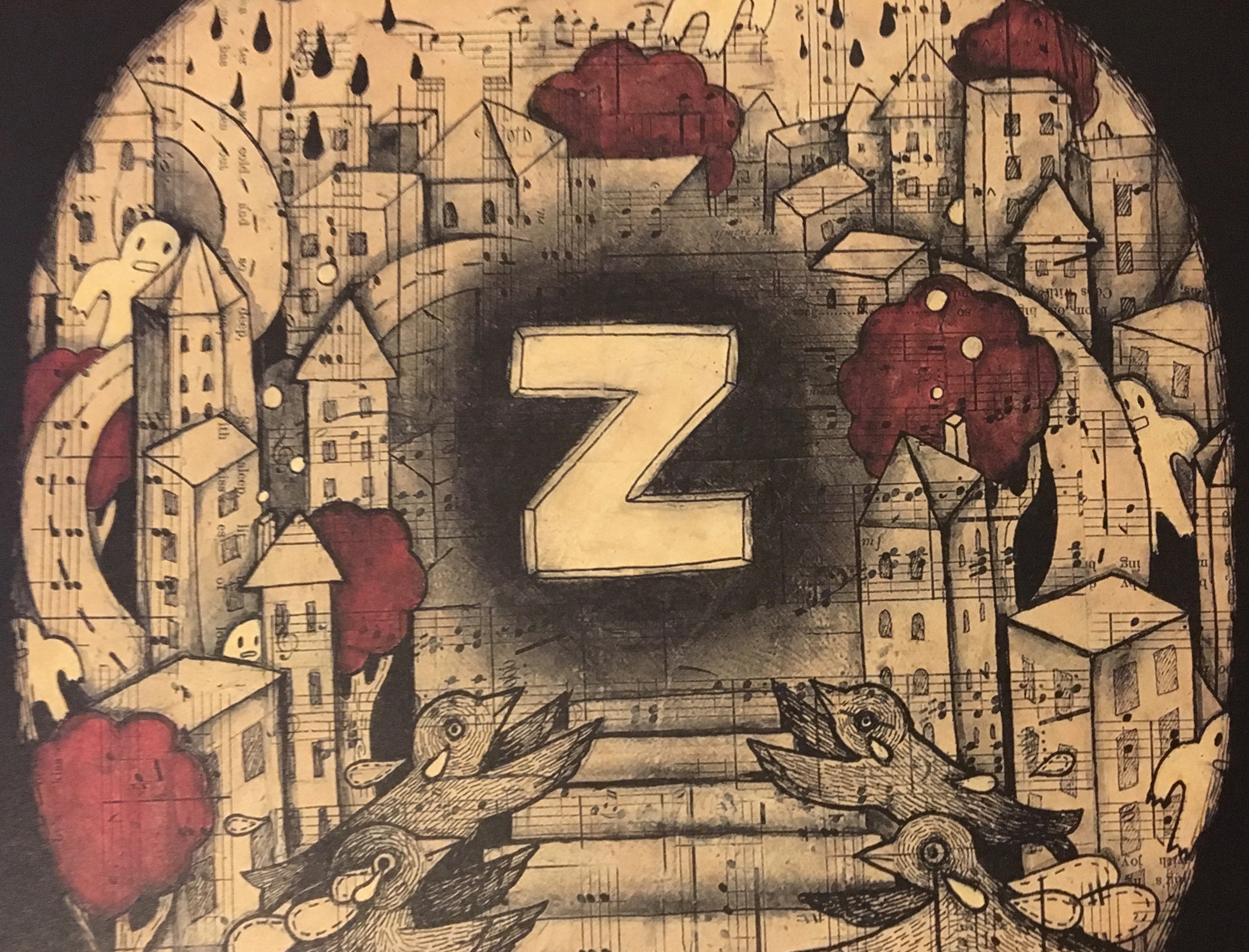 Try not to splatter yourself when you take this translucent splatter disc out of that sleeve, ’cause it’s kinda bonkers. And there’s two of them. 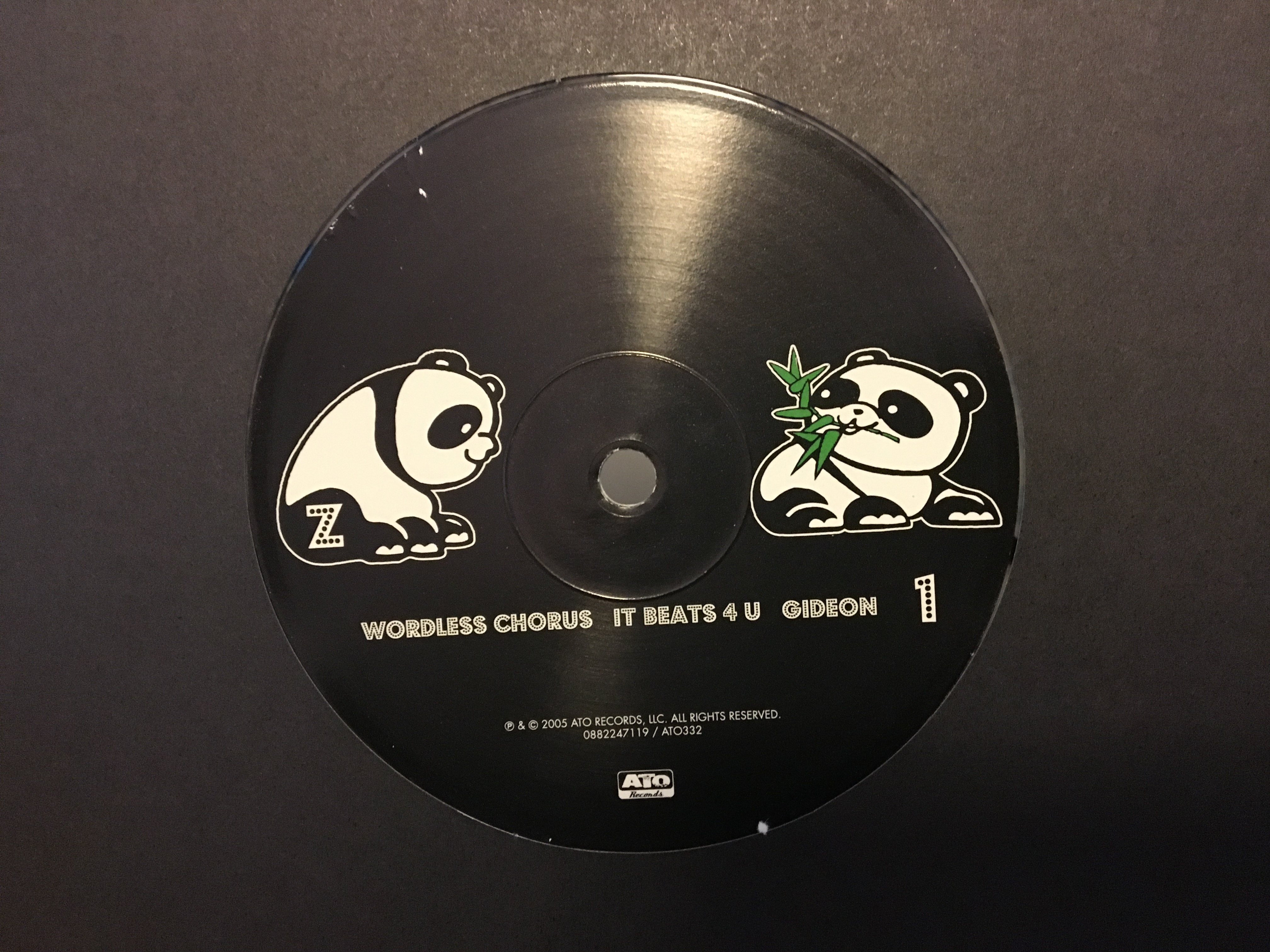 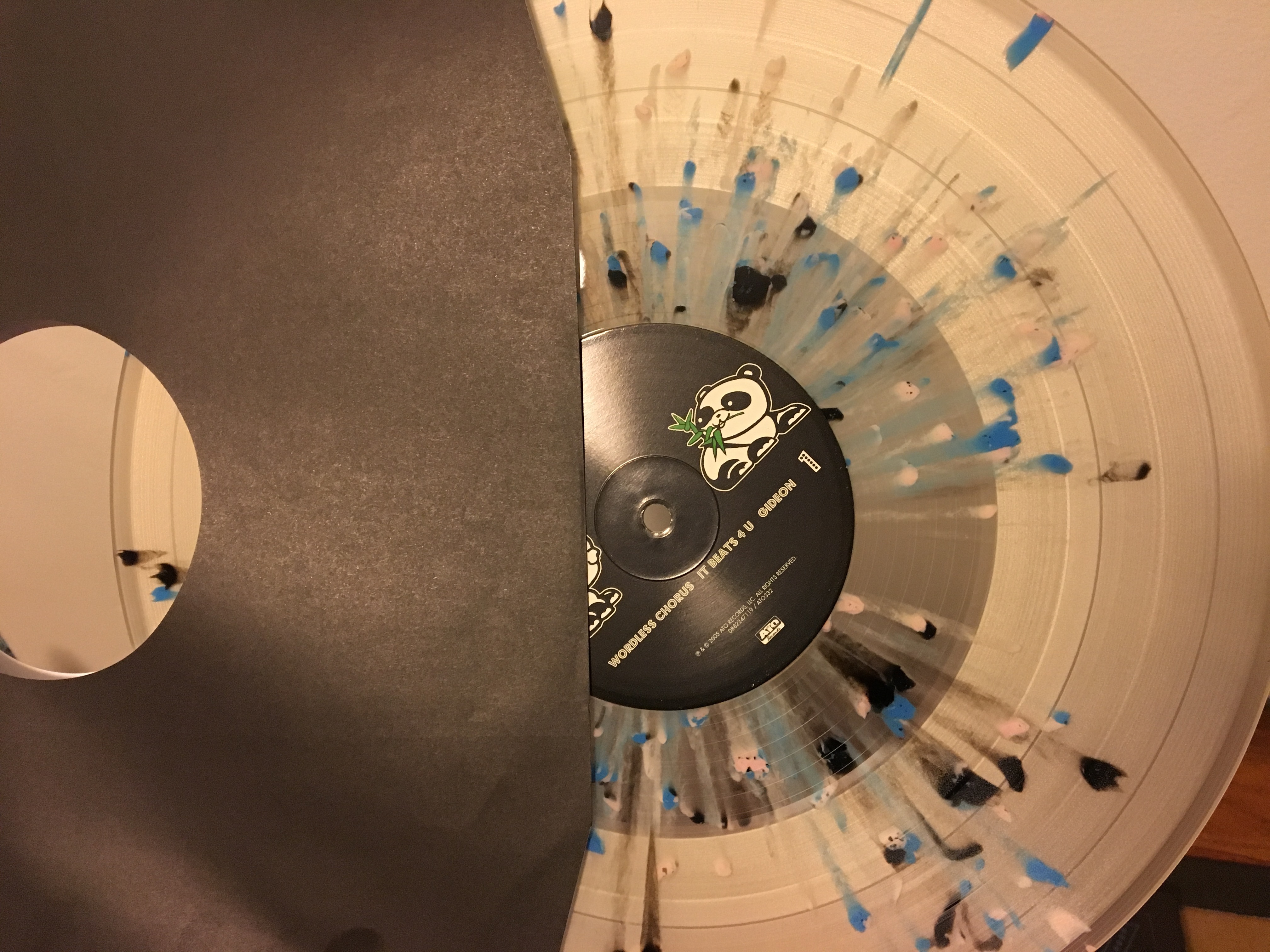 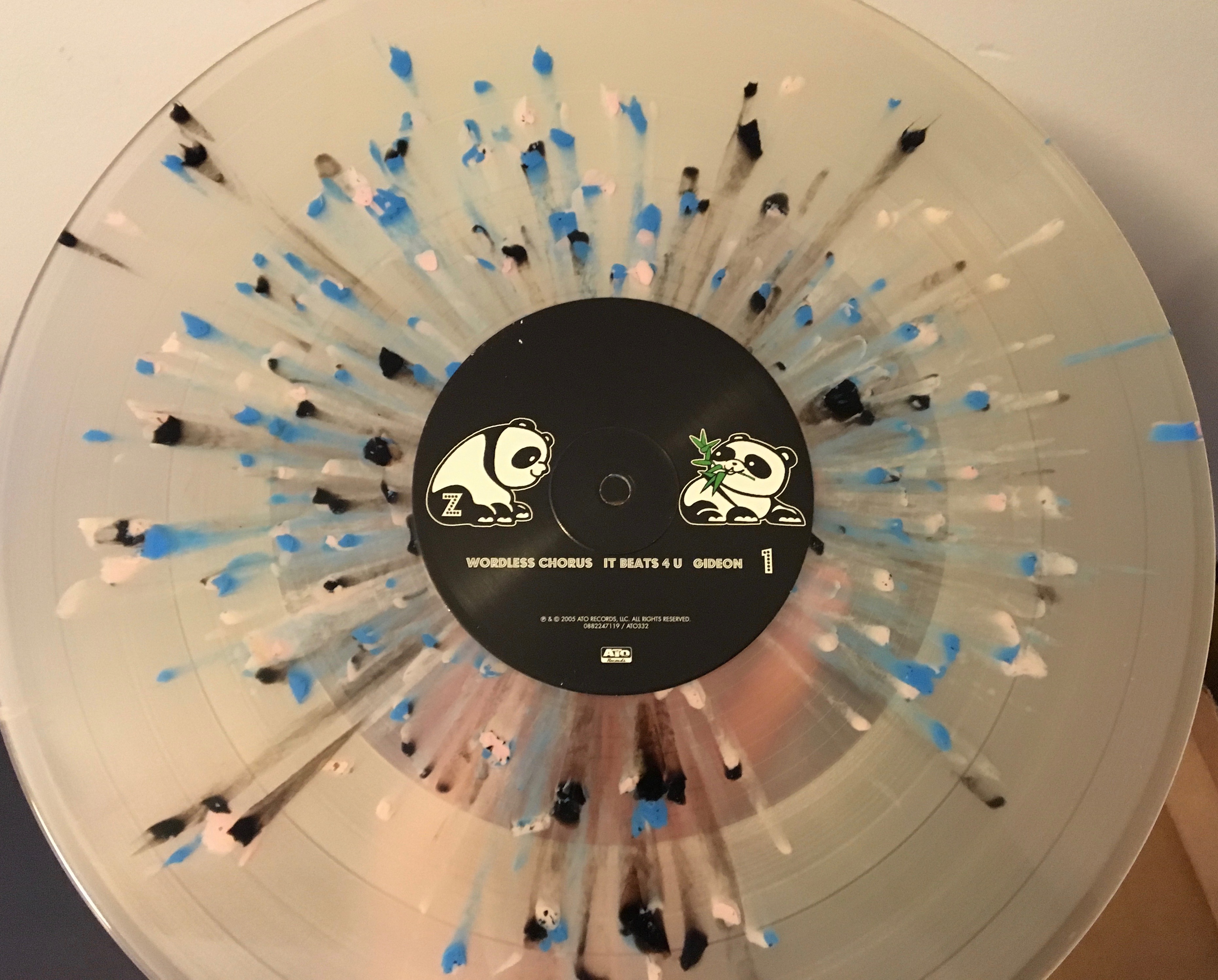 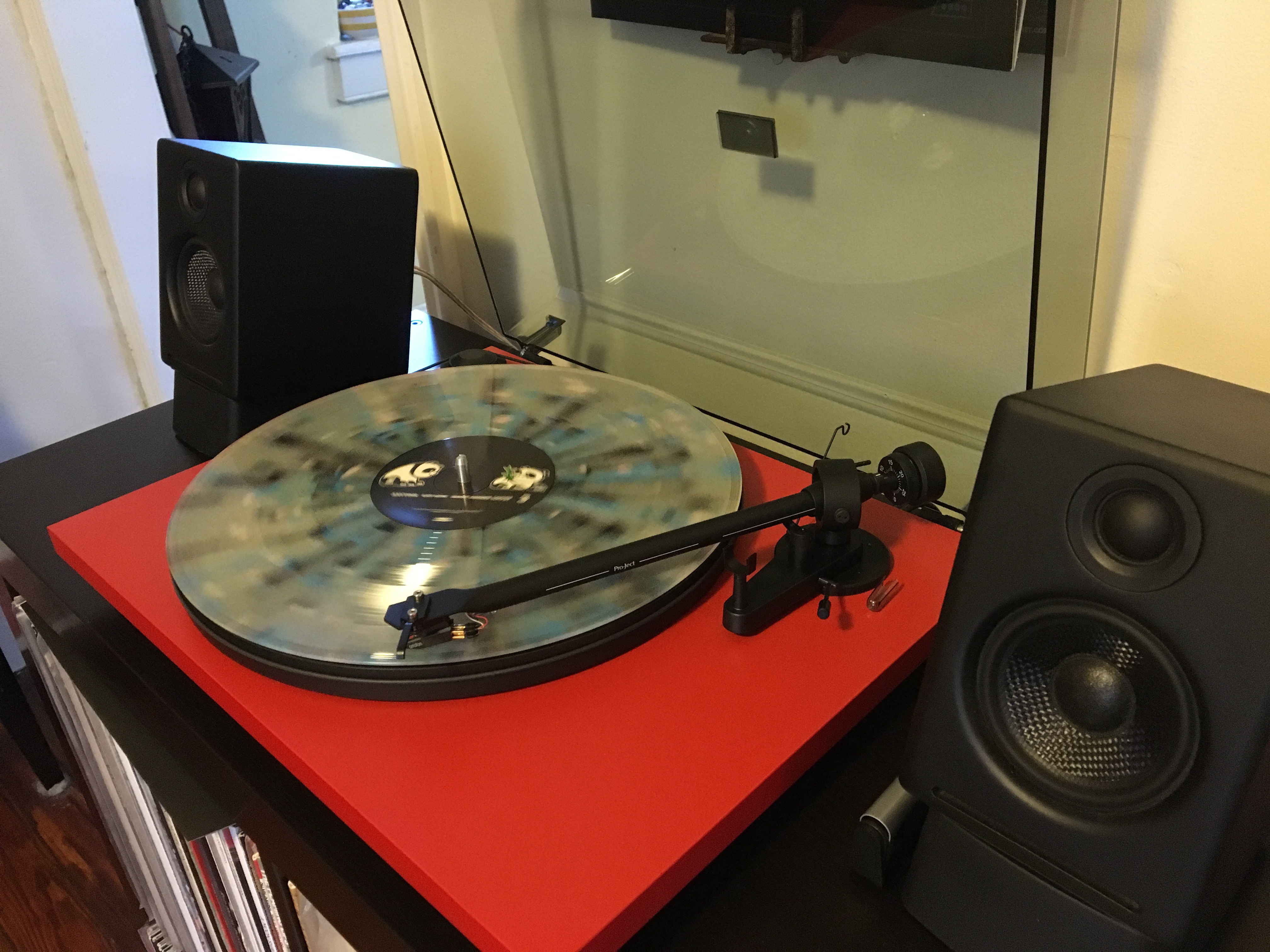 How’s it sound? Like you fell asleep on a train roaring through the desert. You toss and you turn. You wake up and look out the window at barren landscapes barely lit by the moon. Someone two seats back is lightly strumming a guitar. You drift off again and dream about coyotes crawling inside of you and taking control of your spirit. You dream about wandering through mountain passes and sleeping under the stars and fighting off snakes and scorpions and all manner of foul things. You dream of stumbling across a traveling freak show in need of a wolf man. You try to explain that you’re a coyote man and not a wolf man – not that average folks will notice. You join the show anyway and travel the world, wowing slack-jawed gawkers by biting the heads off of chickens. But something is missing. There’s a void in your mind. And in your heart. And just when you start to understand what it is, you wake up … at home … in your own bed … wet with sweat and chewing feathers from your pillow. But somehow you know that all is right with the world.

Another month, another amazing release from Vinyl Me, Please. And another album I’ve been jonesing to add to my collection. You should want Z in your collection too. If only because it may go down as one of the last great rock albums. It’ll certainly go down as My Morning Jacket’s finest. Of course, that may not matter to you. If I know anything about My Morning Jacket, I know that they’re one of the more divisive bands around. And their folky, bluesy blend of arena rock and introspective soul is not for everyone. However you feel about the band, you need to give this album a chance. Or a second chance. Or a third chance. Trust me, there’s more going on here than meets the eye … or the ear. And Z is an album that gets better with every listen. It’s high time you heard it on your turntable. Thanks, VMP for making that happen. And thanks for making every new selection an adventure … ’cause that’s the whole point of music.

A big THANK YOU to our friends at Vinyl Me, Please for sponsoring this subscription. Don’t forget to check out the official Vinyl Me, Please website and sign up to get some choice wax delivered right to your door each month! Can’t wait to see what’s headed our way for September.

What is the easiest crypto exchange to use?

Advantages and Disadvantages of Crypto Signals You Should...

How to Geek Out Your New Apartment

How to properly exchange XMR for BTC