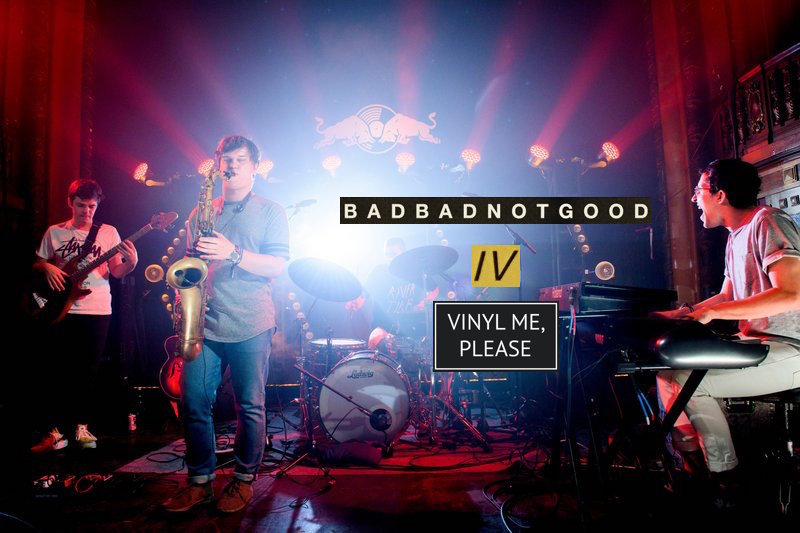 Here’s how it works. You supply Vinyl Me, Please with $23 a month and they supply you with one meticulously selected album worthy of your time and attention. Stupid easy, right? Each custom pressing (often in color!) also includes tons of special features like original artwork and even a companion cocktail recipe. There’s also the chance to get some free vinyl swag that the VMP team dishes out with alarming regularity. Best of all, you get access to the VMP members-only store. When the Member Store opens on July 18, you’ll have a chance to grab a copy of previous VMP selections from the archives – including June’s outstanding release of Wells Fargo’s Watch Out! – plus additional rare and exclusive releases. This month’s store will feature a sexy new pressing of Destroyer’s Kaputt (2LP, Red Vinyl, VMP Exclusive LTD to 750 copies), a long overdue reissue of The Chills laid-back rocker Kaleidoscope World (2LP, Red Vinyl, VMP Exclusive LTD to 750 copies), a shiny new release of piano-maestro Max Richter’s The Blue Notebook, and a killer re-release of Squirrel Nut Zipper’s neo-ragtime classic Hot. And for the soul set, be sure to grab a copy of Ann Peebles’ I Can’t Stand The Rain. Trust me, this is one album you do not want to miss out on.

If you’re still on the fence about signing up, just know that VMP’s Swaps Program is in full effect. You can read all about that program right here. And if you want to discuss the matter face to face with fellow VMPers, keep an eye out for VMP’s road-show, The Spins. They may be coming to a bar near you in the very near future. But try not to overthink it. Do yourself a favor and sign up today. But first, let’s have a look at what’s inside this month’s box. 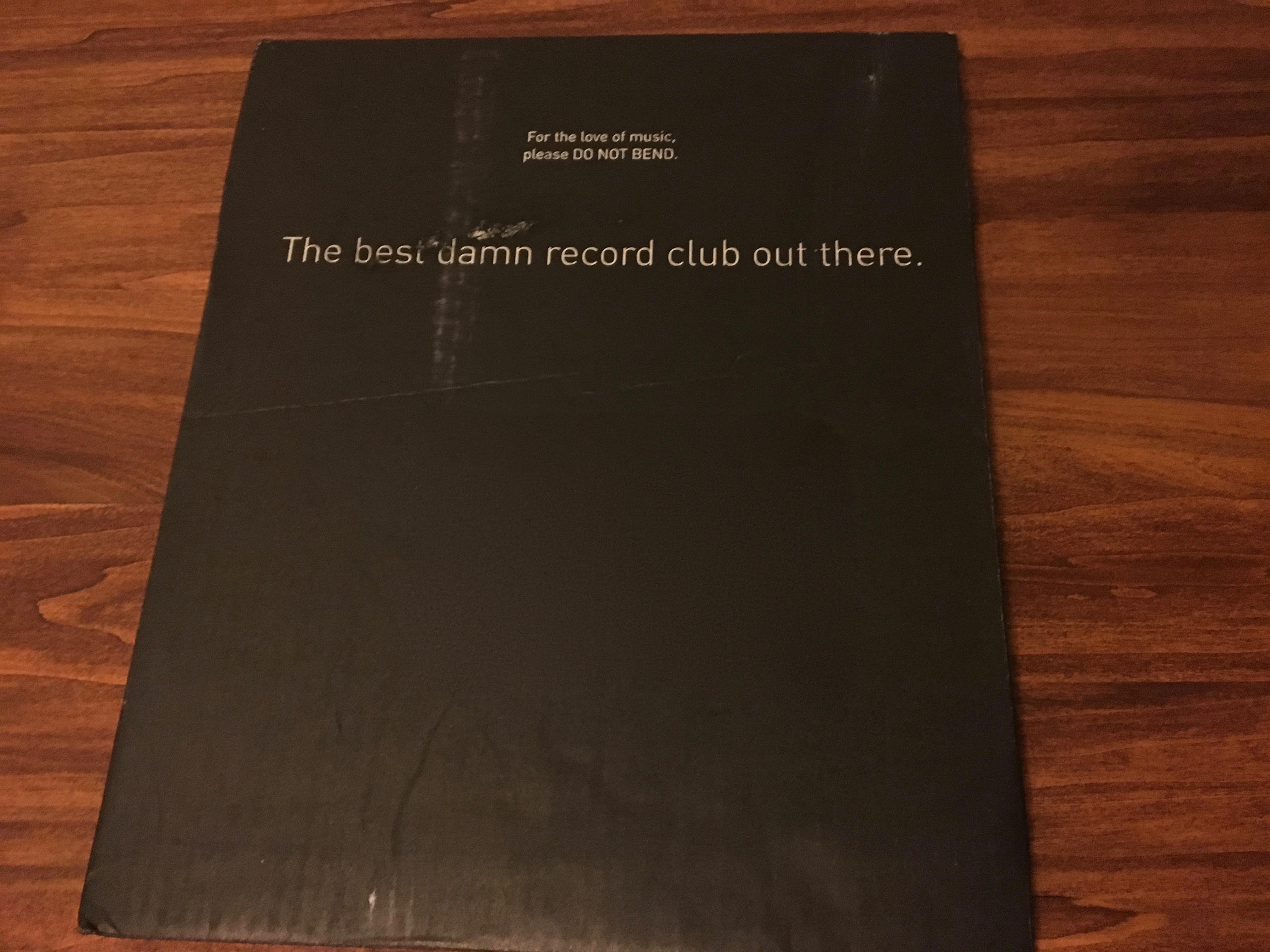 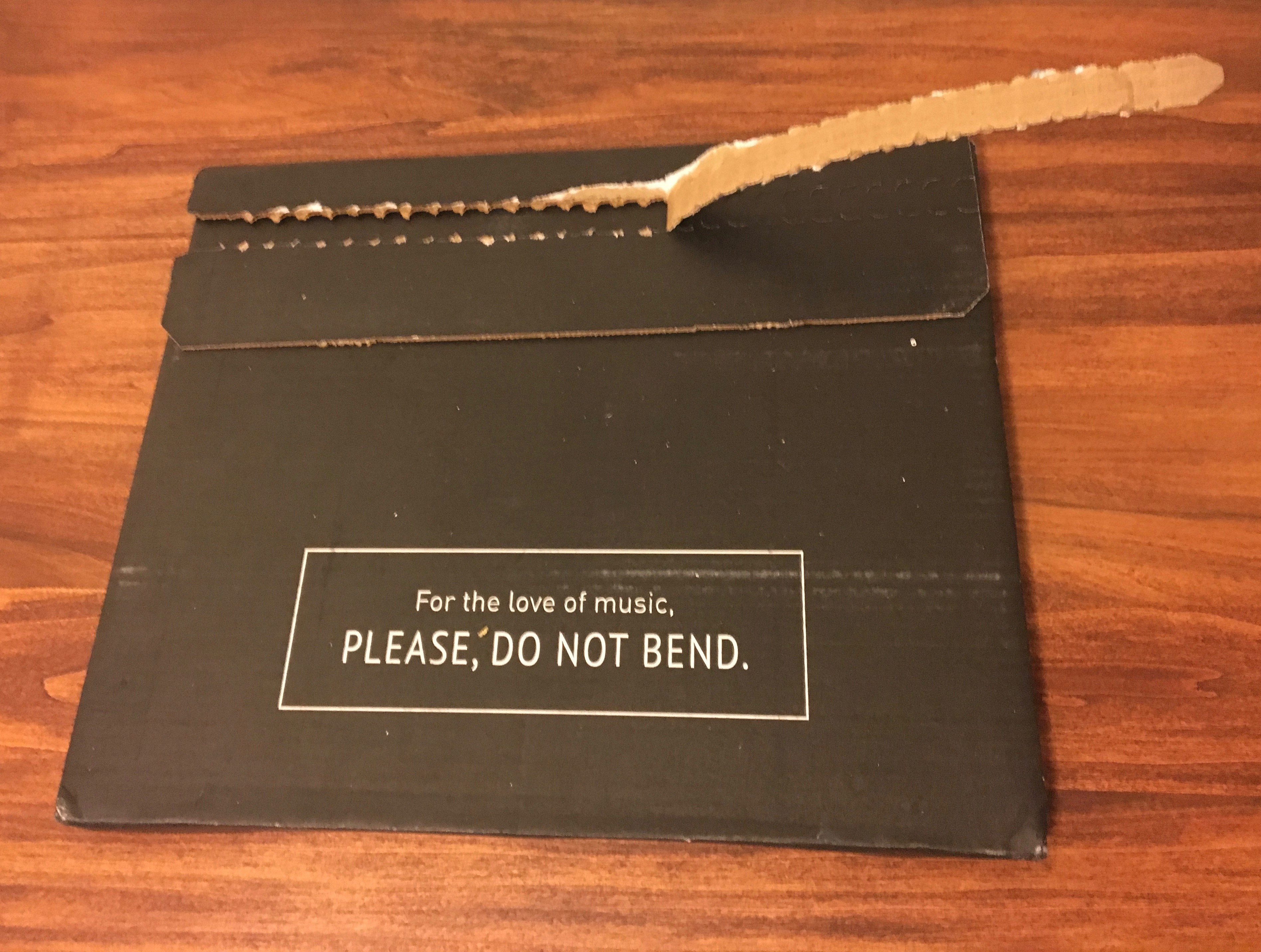 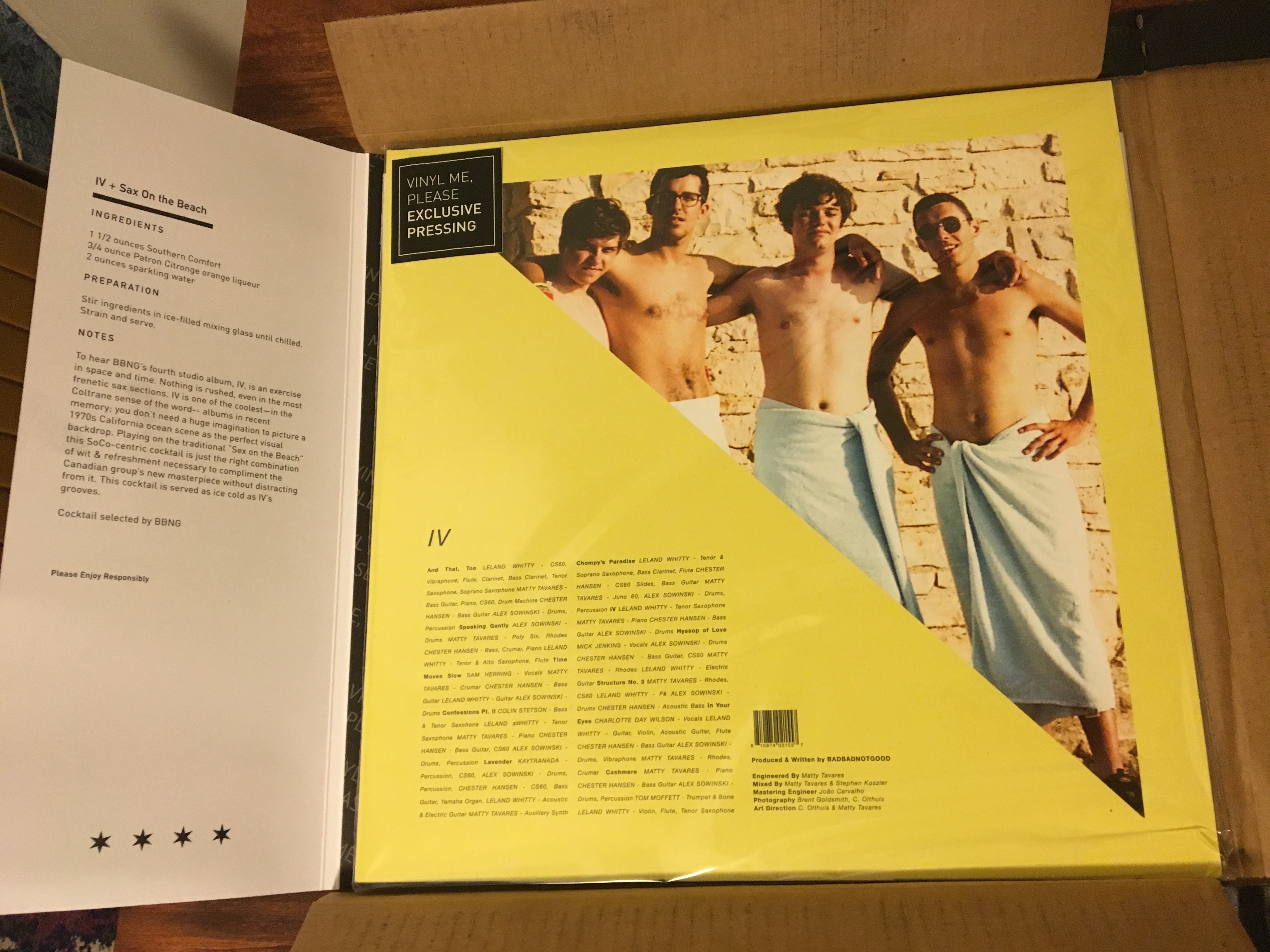 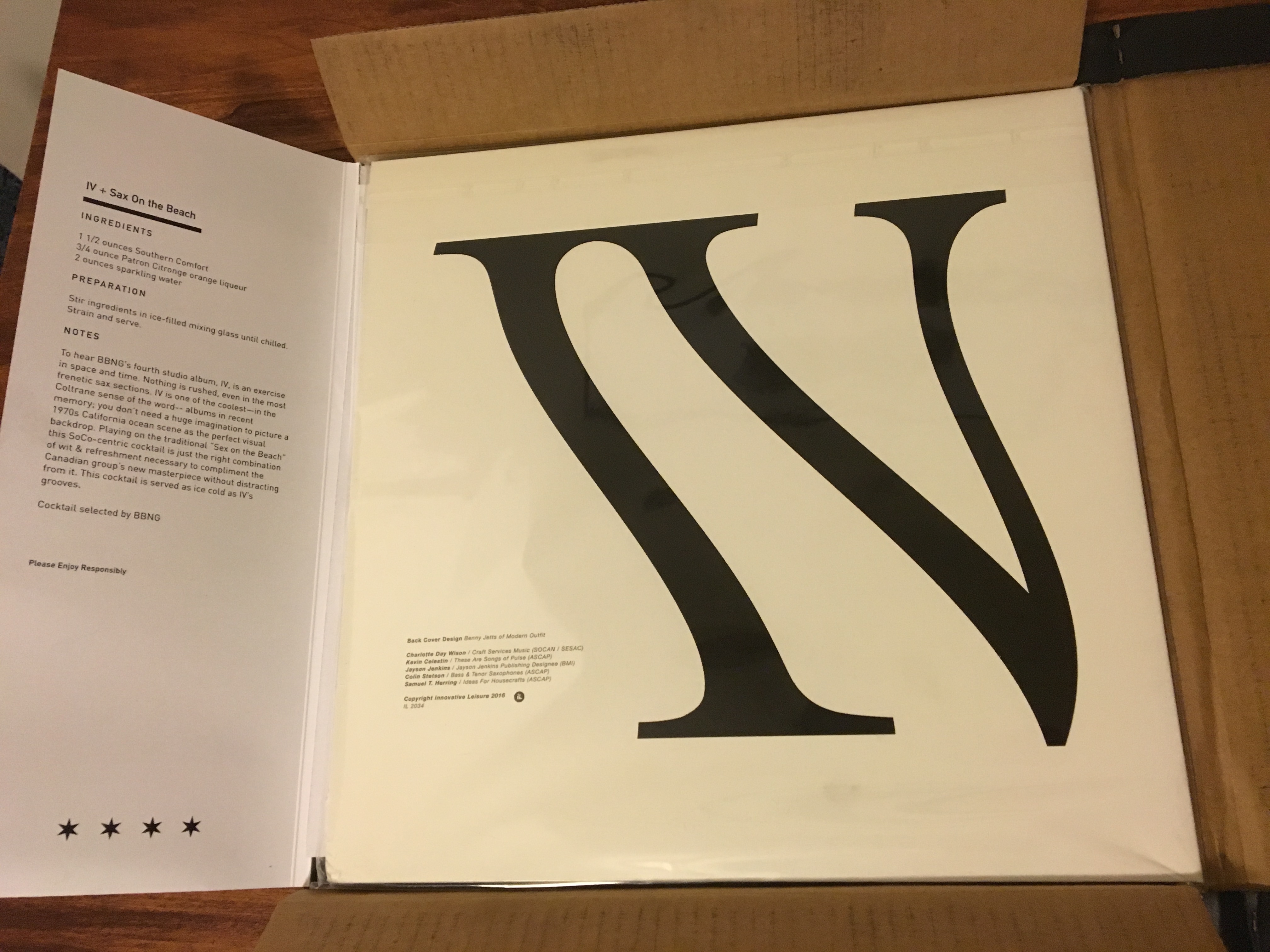 After scouring the African continent to find June’s pick, the VMP team find their way back to North America – Canada to be precise – for July’s release of IV from BADBADNOTGOOD. And what an odd little band BADBADNOTGOOD is. And what an unexpected little treat this album is. The unexpected is exactly what you can expect when listening to IV. So much so that I don’t want to tell you too much about it. But if you were to ask me if IV is a jazz album, I’d say yes. If you ask if it’s a hip-hop album, I’d say yes. If you ask if it’s a soul album, I’d say yes. It’s also a rock album, an electronica album, and a rather daring slice of avant-pop. I know, none of those styles sound like they belong on the same album. But here we are. And BADBADNOTGOOD is out to show you that everything you know about making a record might be wrong.

It only takes the band about four tracks to do just that. And they don’t waste any time doing it. IV kicks off with the trippy, vibraphone-tinged ‘And That, Too’ before swinging into the hip-hop instrumentals of ‘Speaking Gently’. The transition from horns and strings to synths and beats shouldn’t work. But it’s so smooth you hardly notice the song has changed. Then the sultry soul of ‘Time Moves Slow’ (featuring vocals from Future Islands frontman Sam Herring) hits and you know that this album is doing something special. Something you’ve never experienced before. By the time the power-sax grooves of ‘Confessions II’ kick in, you’re gonna be down to go wherever this album takes you. And that’s just what BADBADNOTGOOD want. Jazz is, after all, the universal language of music. It can simultaneously be whatever its maker wants and whatever its listener needs. You’ve just got to be open to the ride. And IV is an album that requires an open mind. And an open ear. And an open heart. If you bring anything less, you’ll find yourself on the outside looking in. And IV is the sort of album that cannot be understood from the outside. It’s an odd little album, yes. But it’s odd in all the best ways. And it’s a full-album experience unlike anything you’ve heard.

Here’s the thing – cover art can make or break an album. It’s the listener’s first impression of a band and their music. And there are fans who will not pick up an album if the art isn’t interesting. That said, I’m fairly underwhelmed with the front and back covers of IV. Given the album’s fresh sound and undeniable ingenuity, the artwork seems tragically uninspired. Even if you do get a little taste of the band’s chilled-out vibe with the photo on the back. 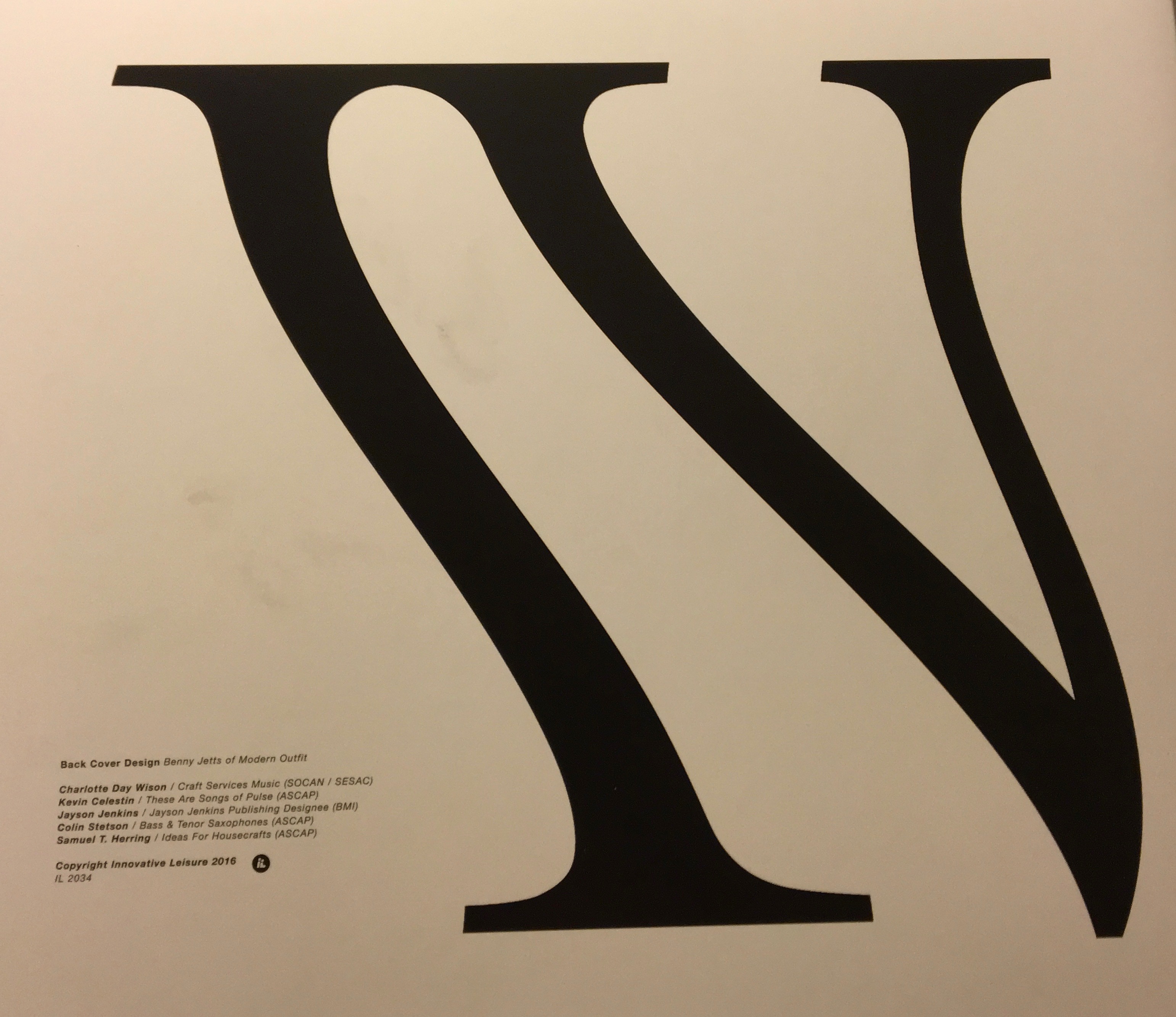 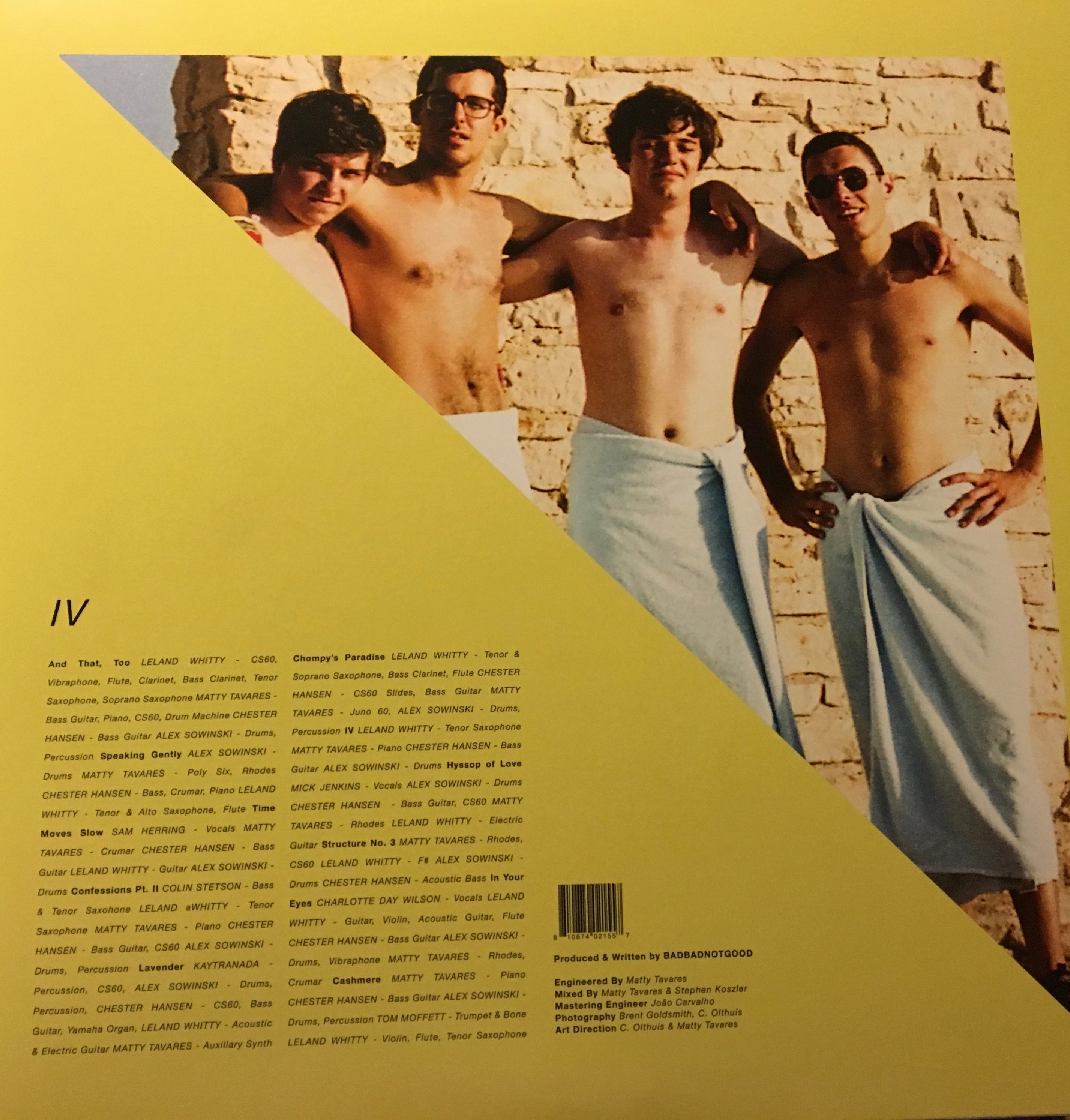 Hey, at least that artwork doesn’t ruin the album. And yeah, you’re in for quite a treat when you get around to spinning this disc. But before you rip open that plastic wrap and start digging through the sleeve, take note of the all-important info on this sticker. 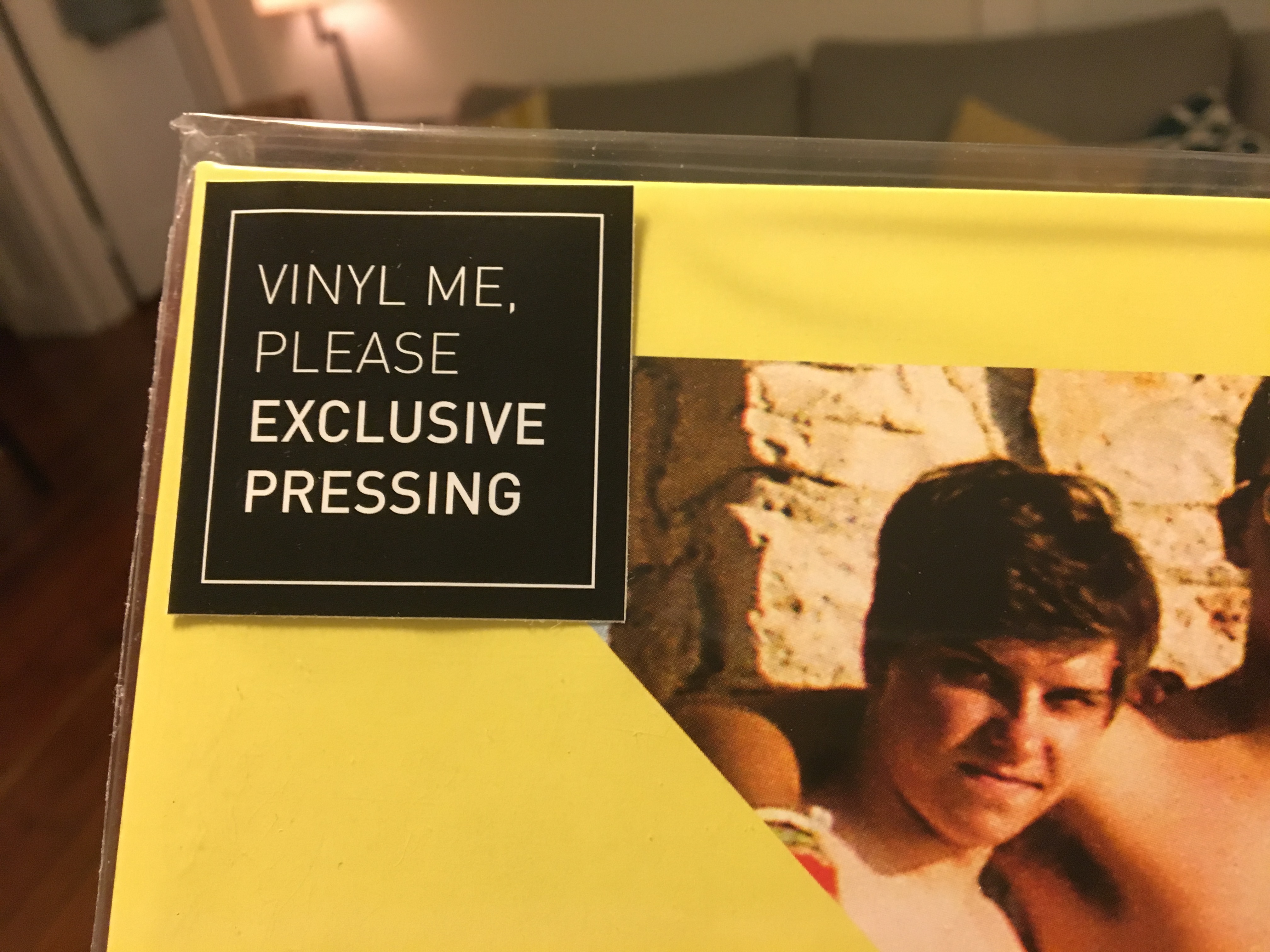 As always, the album comes wrapped in a half-sleeve chock full of important info. Artist’s name – check. Album title – check. Month of issue – check. Even the initials of the VMP Staffer who handled your disc. Thanks for the love, MH. 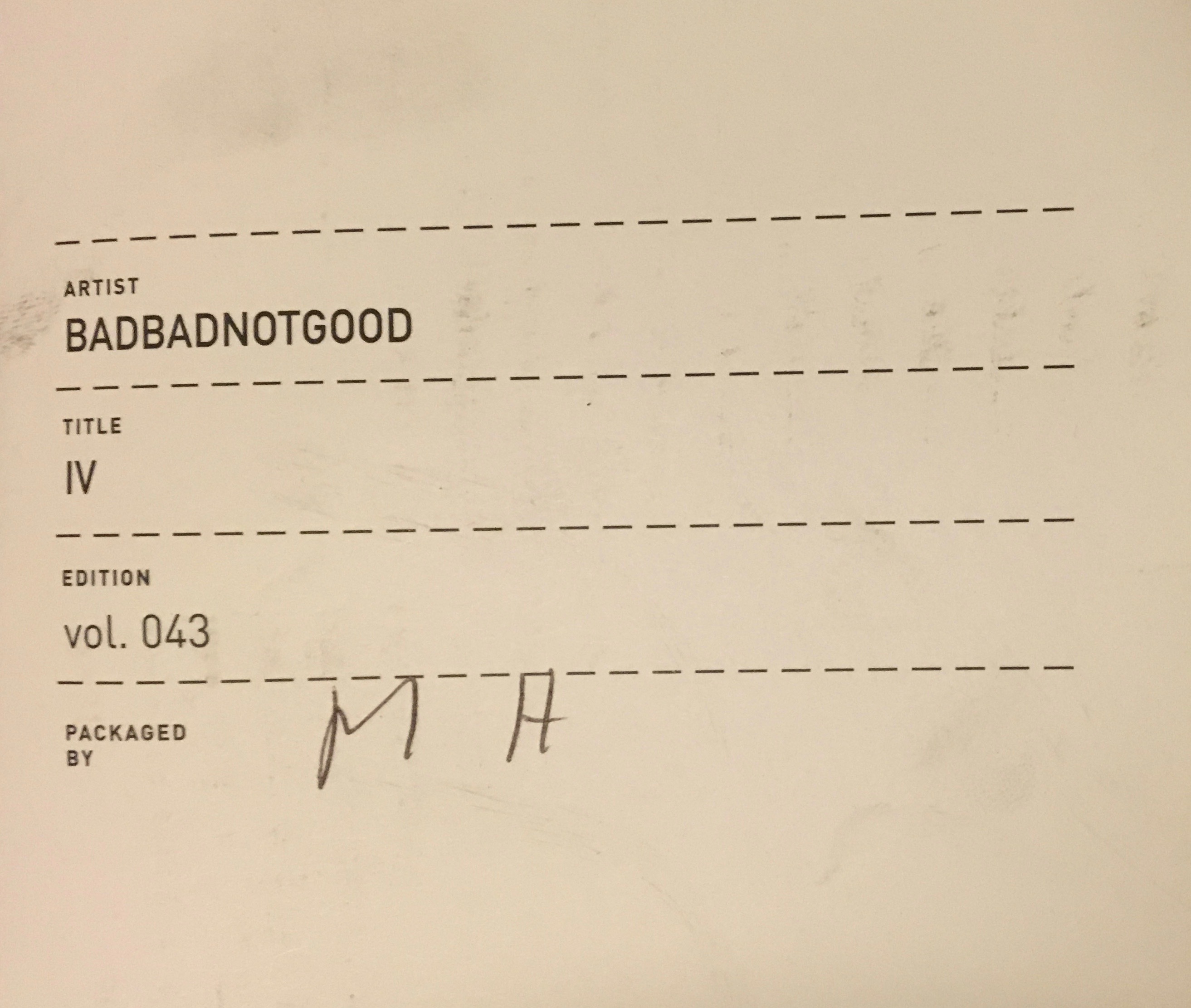 Make sure you don’t overlook IV‘s companion cocktail, the aptly named Sax On the Beach. It sounds crisp and fruity and was selected by the band themselves.

You’ll find a couple of hidden gems in the box too – like this bit of rambling from VMP’s own Tyler Barstow and a killer 12″x 12″ print from artist Vlad Sepetov…who has an awesome name. He’s also put together an intriguing bit of artwork for the album. Not for nothing, but I kind of wish that was the official cover art. Especially after reading Vlad’s take on the material. 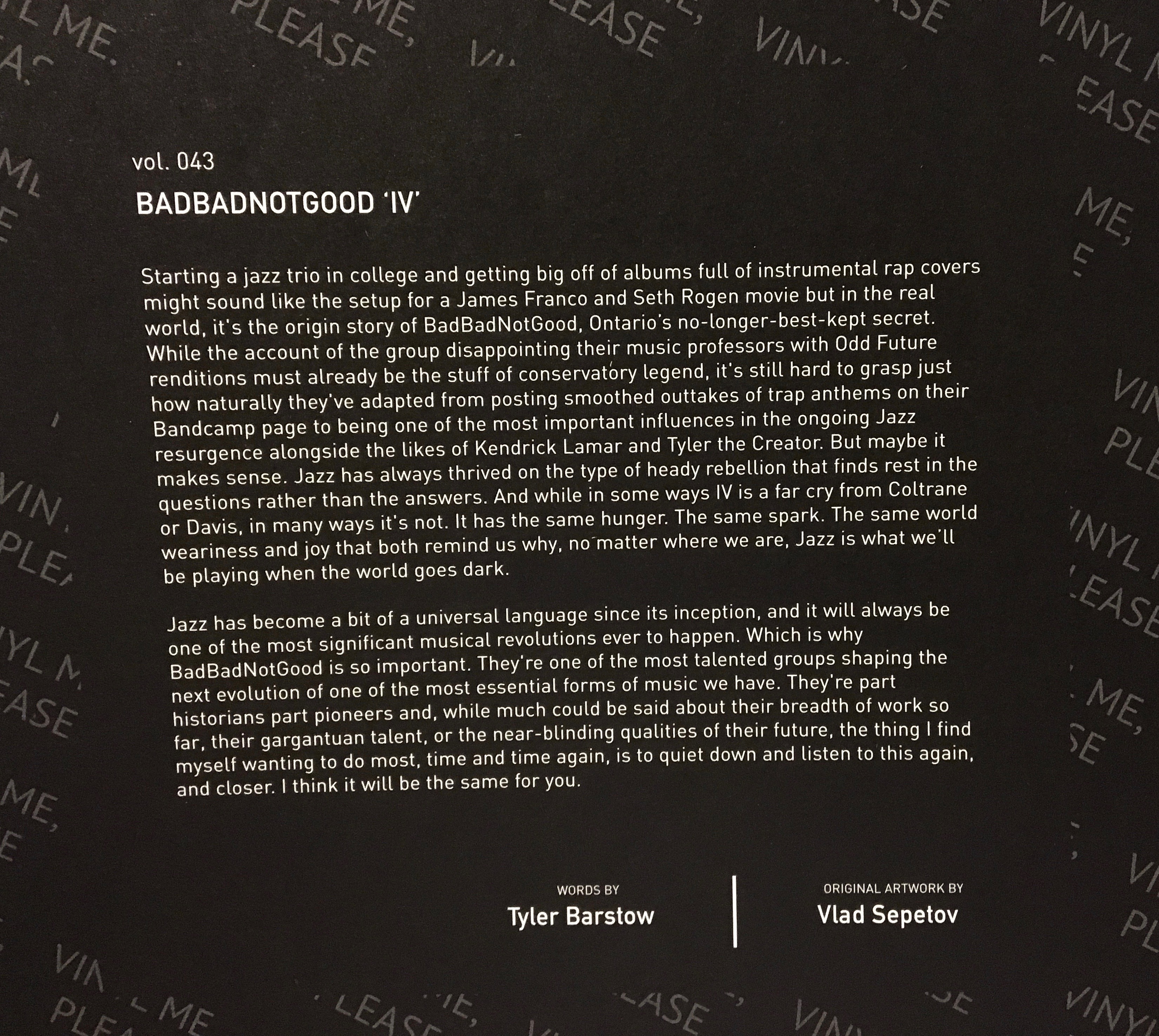 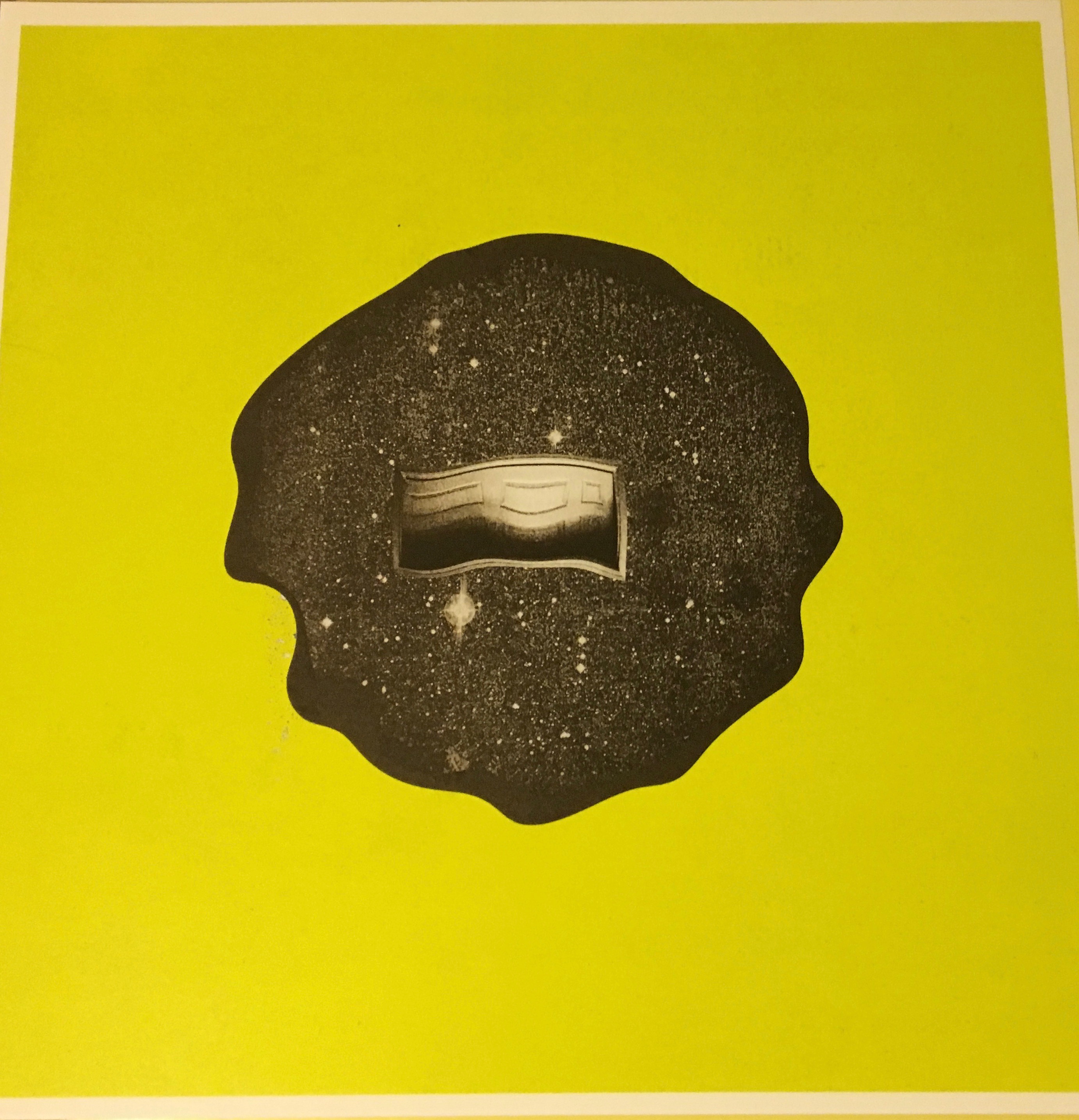 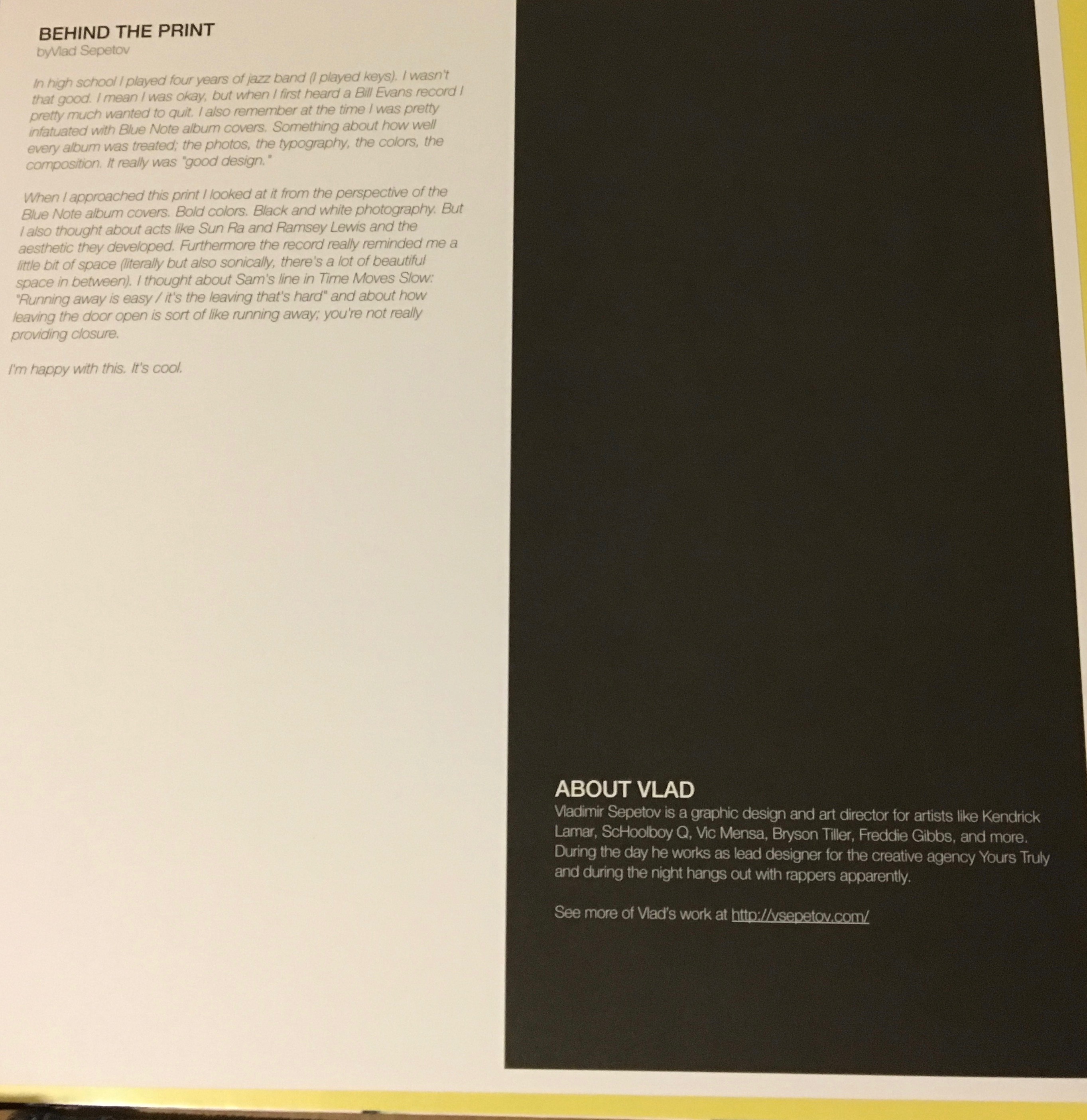 You’ll also find a little teaser for what’s coming to the VMP Member’s Store in the box. Yes, Russian Circles’ new disc Guidance is coming to the store this month. Sigh. 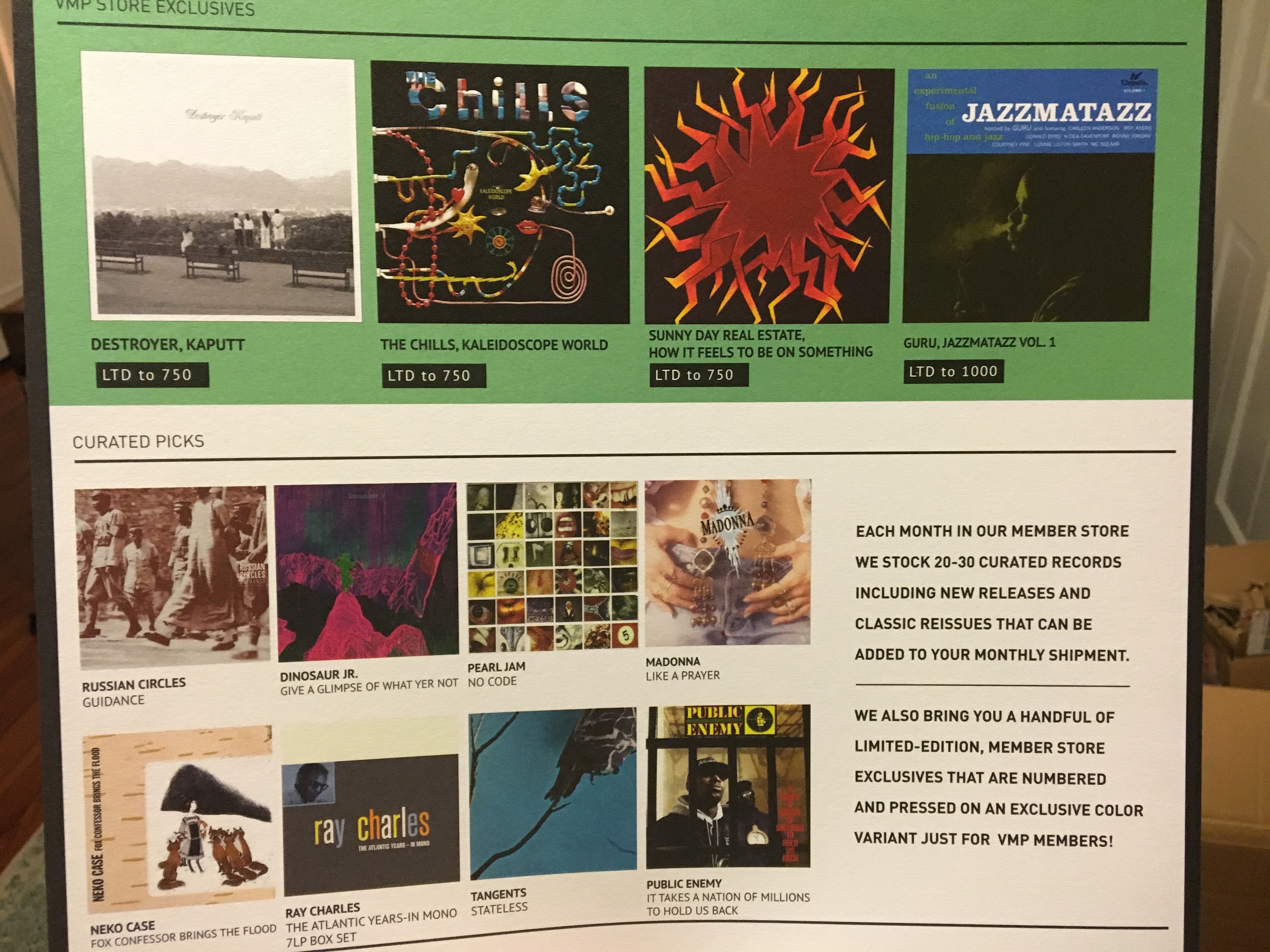 Once you get that plastic off, have a gander and the pic inside that gatefold and you’ll get an up close and personal look at the band. 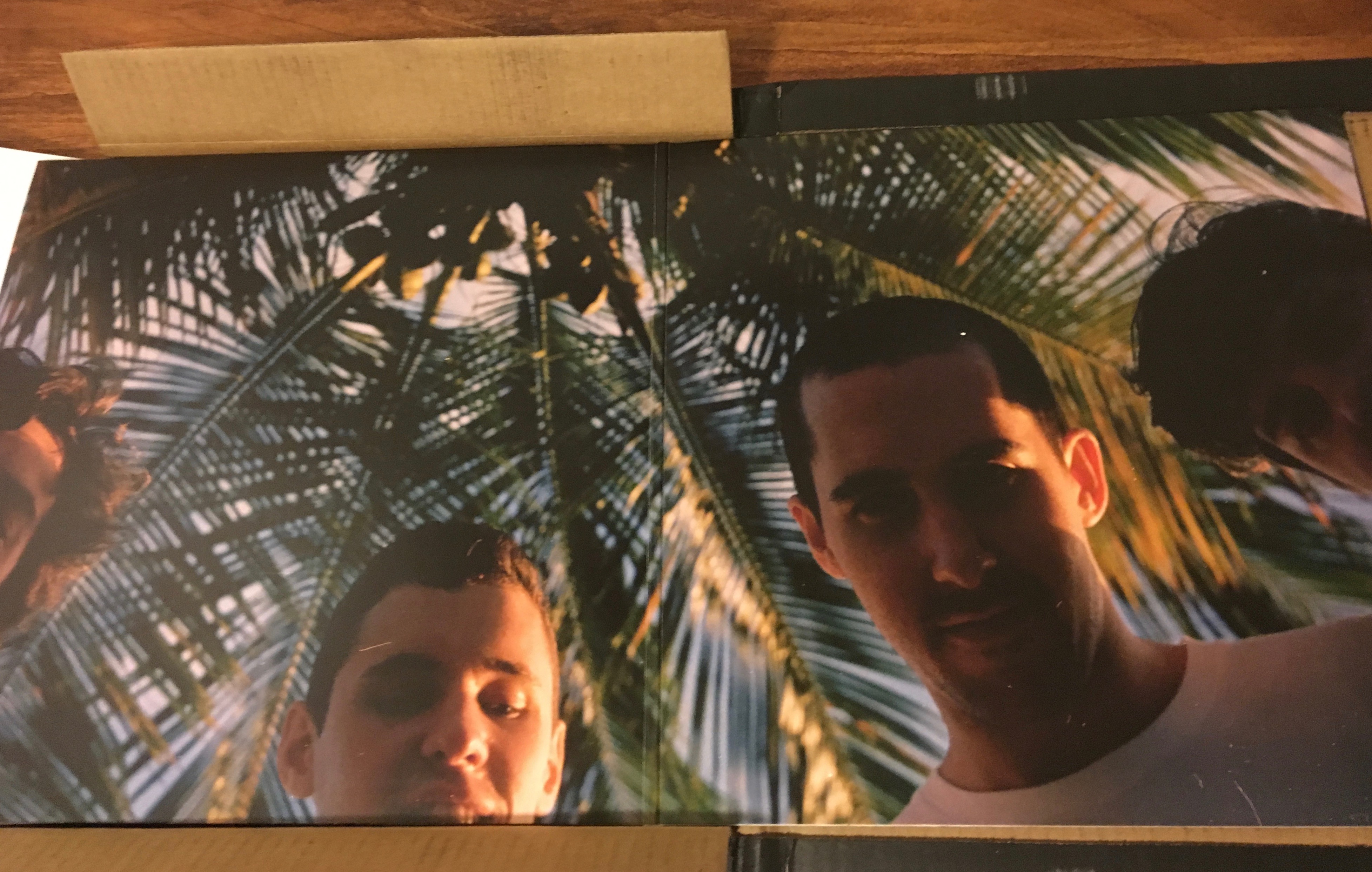 And be careful when you’re digging in that sleeve, ’cause there’s a few random items tucked away in there. Like a tiny sticker of the cornered cover-photo of the band, a little thank you note from the band to their collaborators, and a dropcard for your digital download. 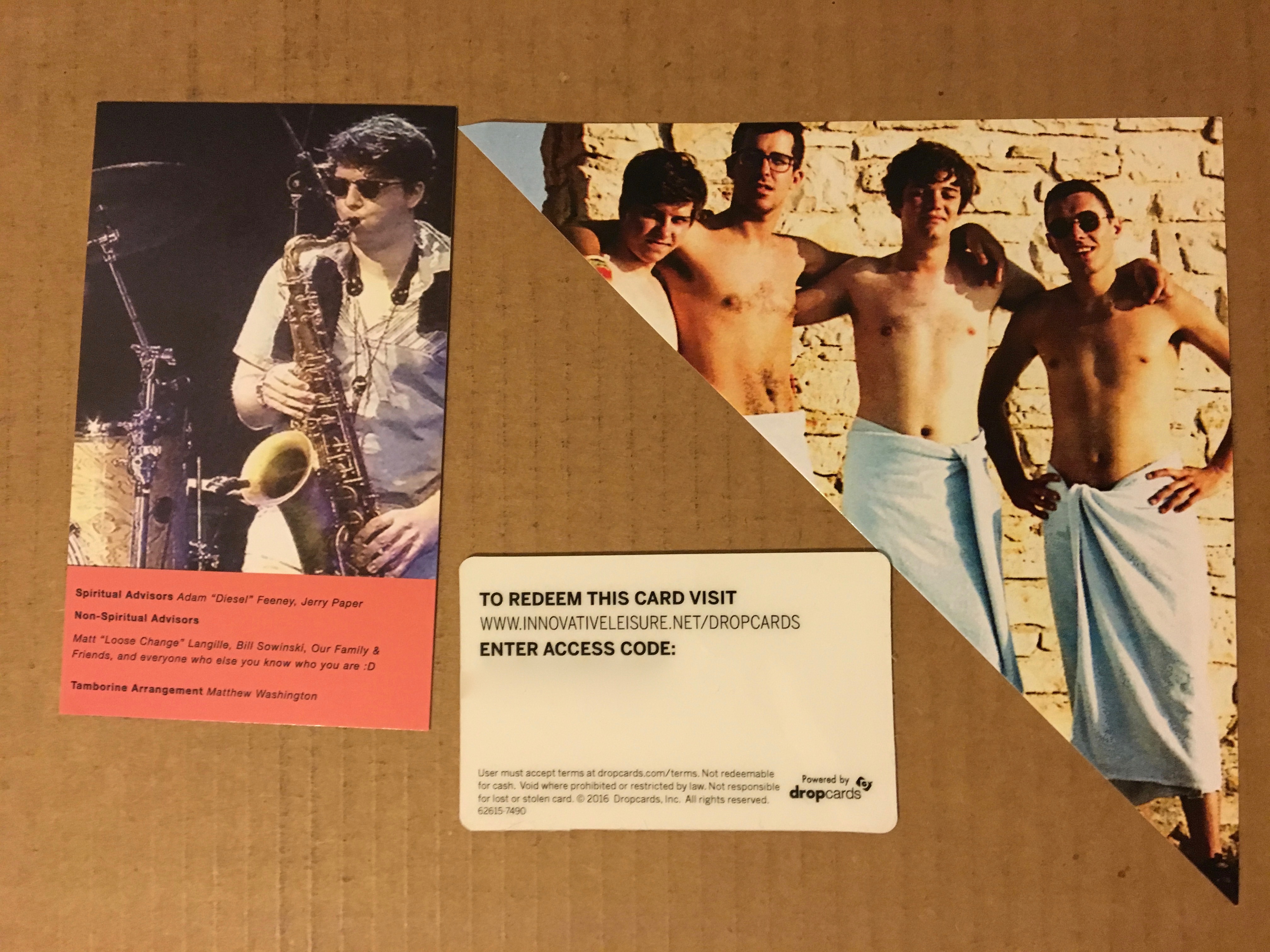 And just wait until you get that disc out of its sleeve. Oh so sexy in translucent lavender. 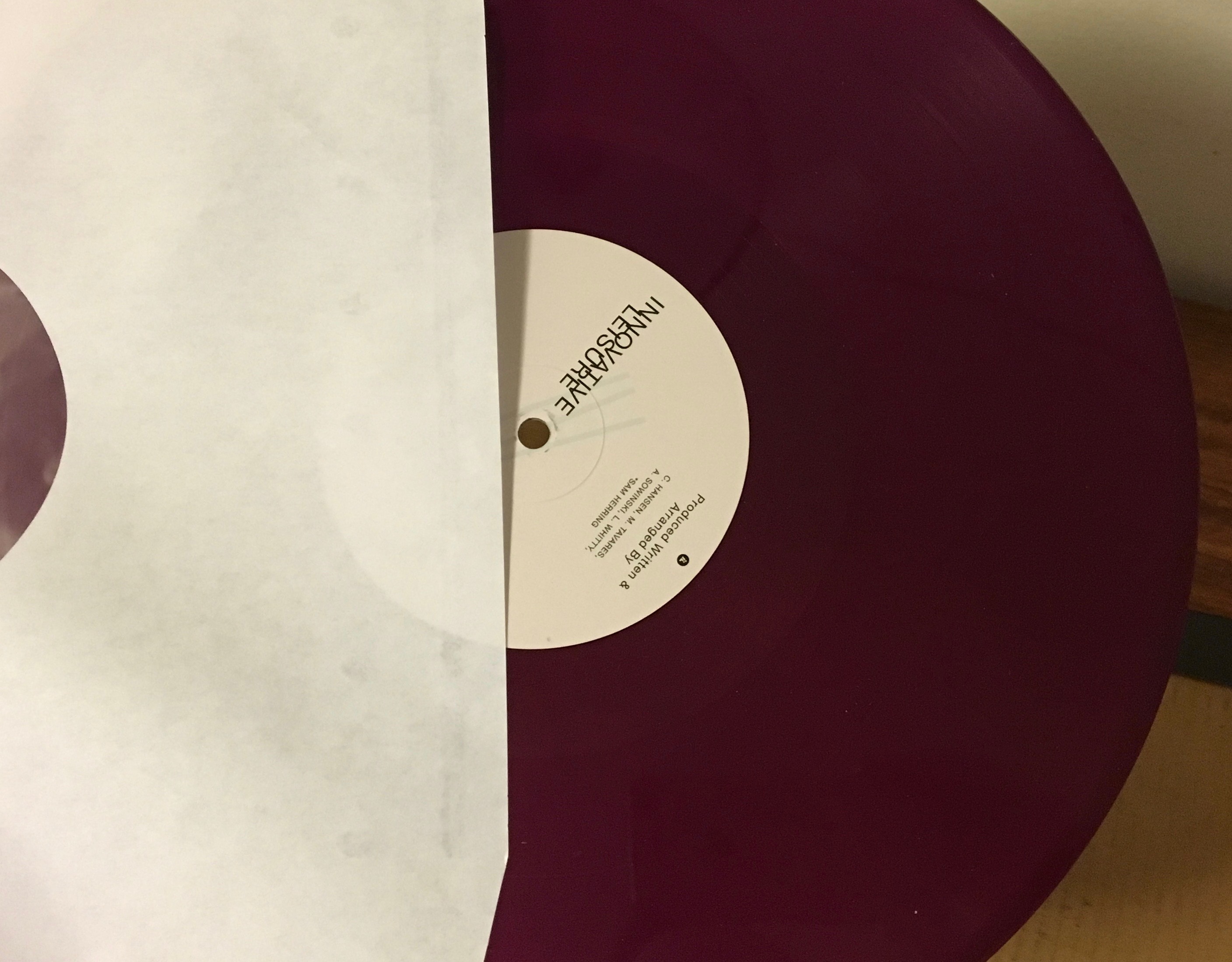 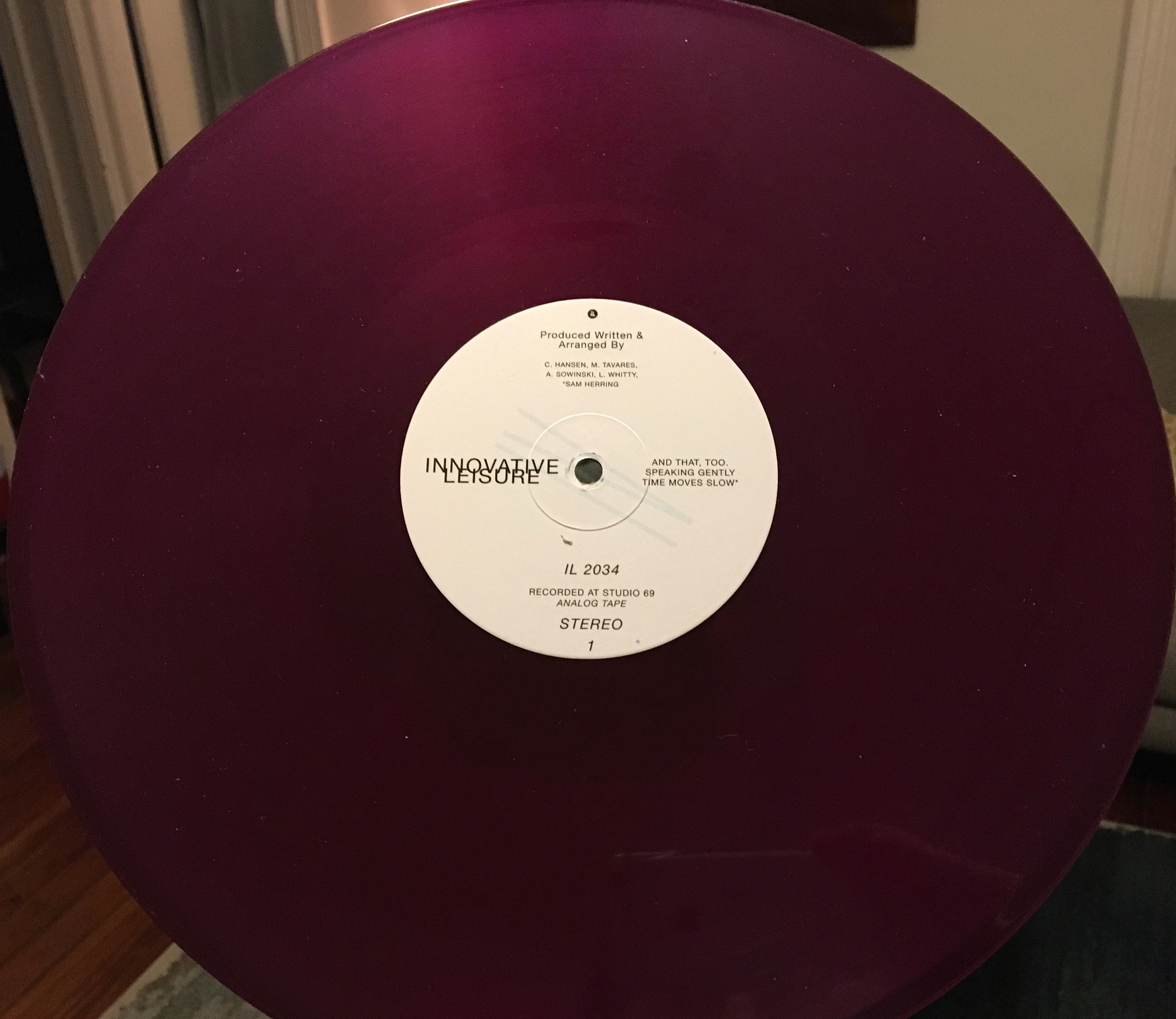 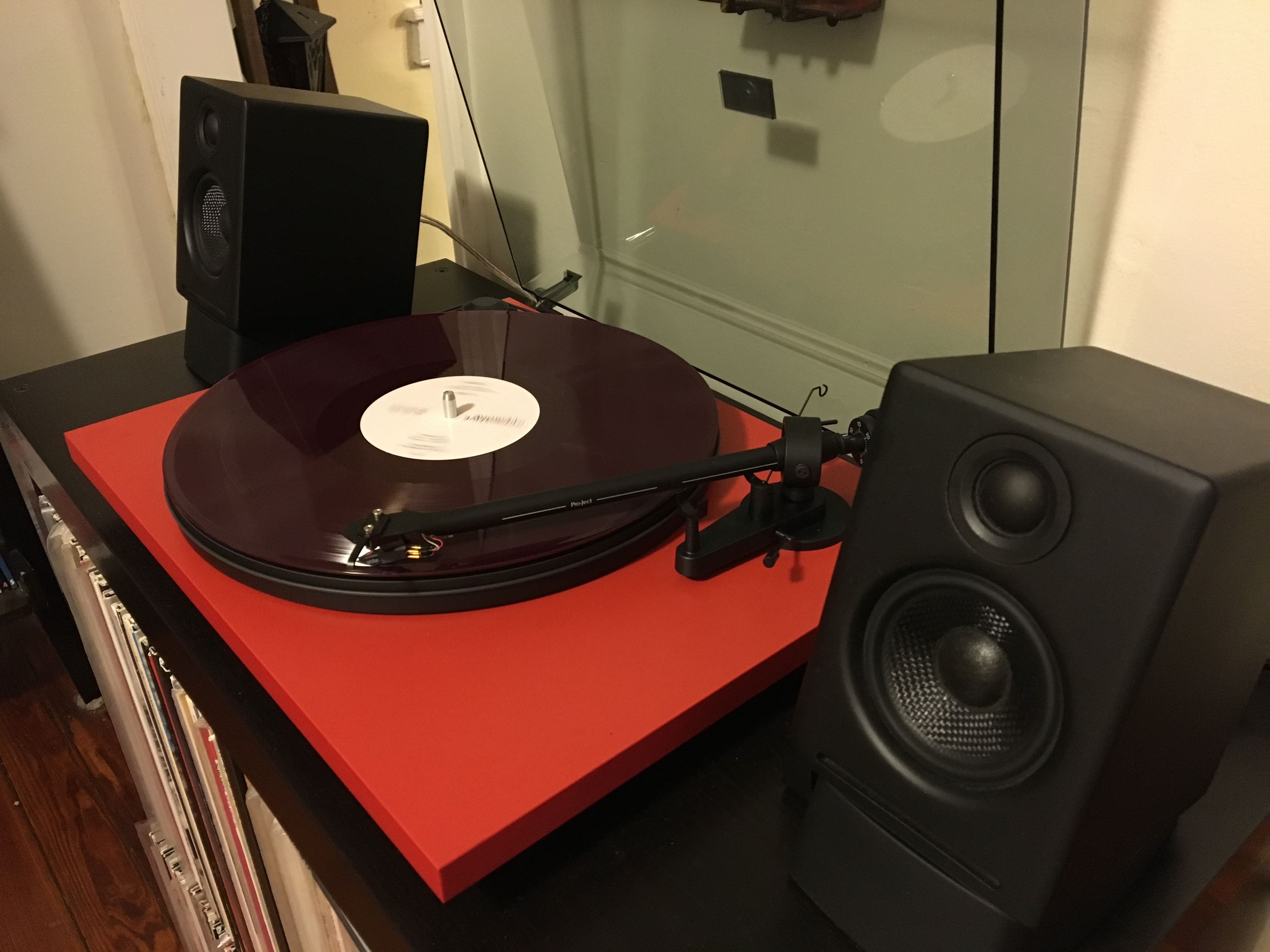 How’s it sound? Like walking into the corner bar on a sweaty summer night and seeing John Coltrane, Ghostface Killah, and Wilson Picket sitting in a corner booth. You order a drink. You squeeze into the booth just behind them. You do your best do listen in. You hear words. You hear laughter. They meld with the music coming from the jukebox. The room begins to spin. You close your eyes and spin with it.

Cover art aside, BADBADNOTGOOD’s IV is another dynamite pick from the VMP team. And another disc that I likely wouldn’t have heard otherwise. That would have been a glaring oversight on my part, ’cause there’s nothing else on the scene that sounds like this. One listen to the jazzed out, hip-hop infused gems on IV and you’ll understand what I’m talking about. Love it or hate it, IV will serve as an eye and ear-opening experience for music fans of all ages. And it’s likely to become the go to late-night chill disc for a new generation of jazz fans. Thanks to VMP for making sure that generation finds it. Of course, you may not be one of them. And you may not always love the music VMP sends your way. But it will always be an adventure … and that’s the whole point of music.

A big THANK YOU to our friends at Vinyl Me, Please for sponsoring this subscription. Don’t forget to check out the official Vinyl Me, Please website and sign up to get some choice wax delivered right to your door each month! Can’t wait to see what tasty treat is in store for August.